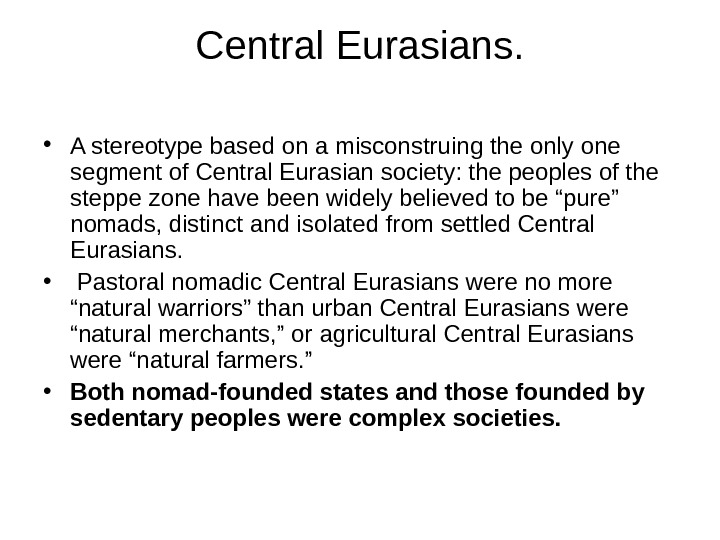 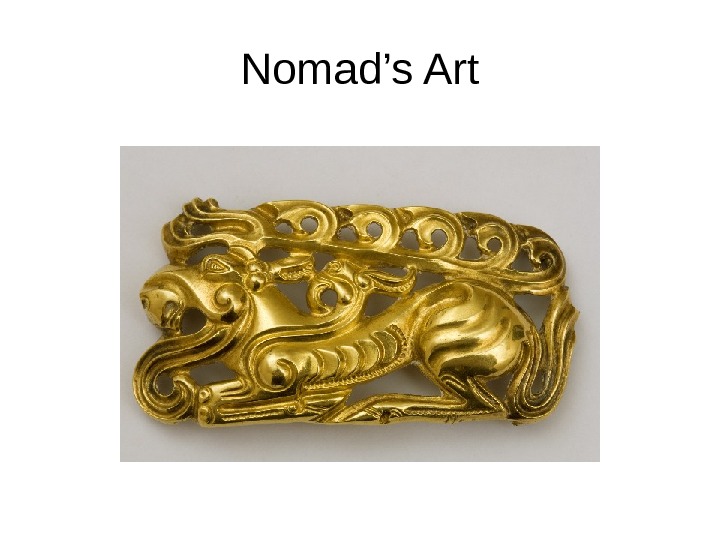 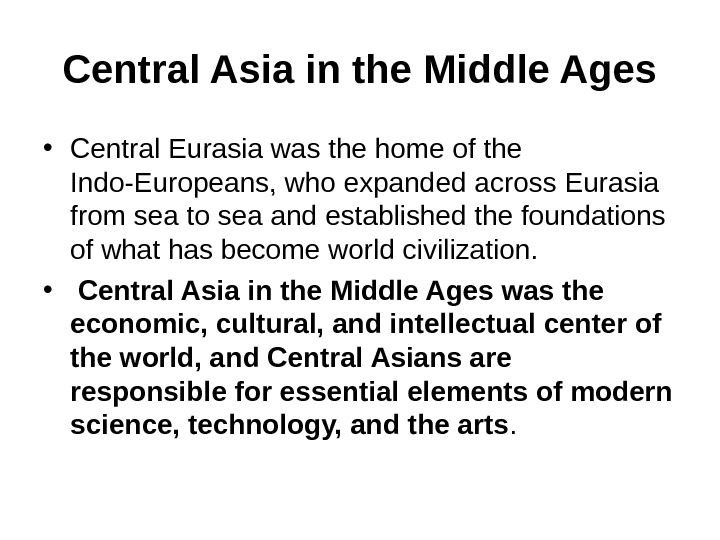 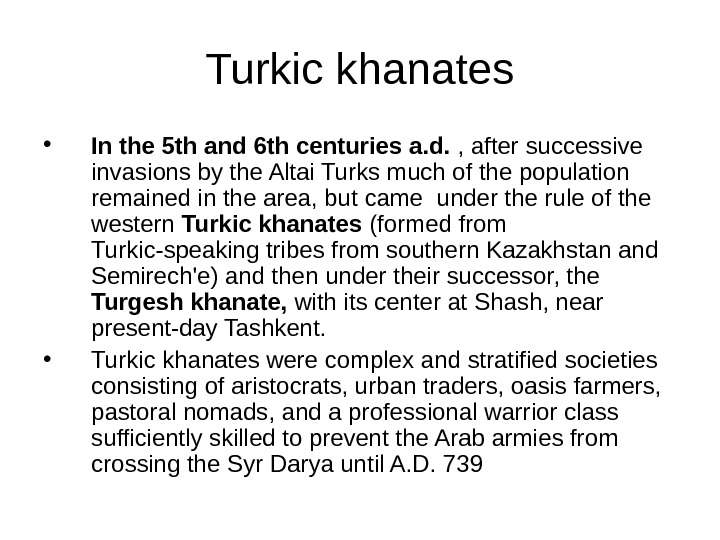 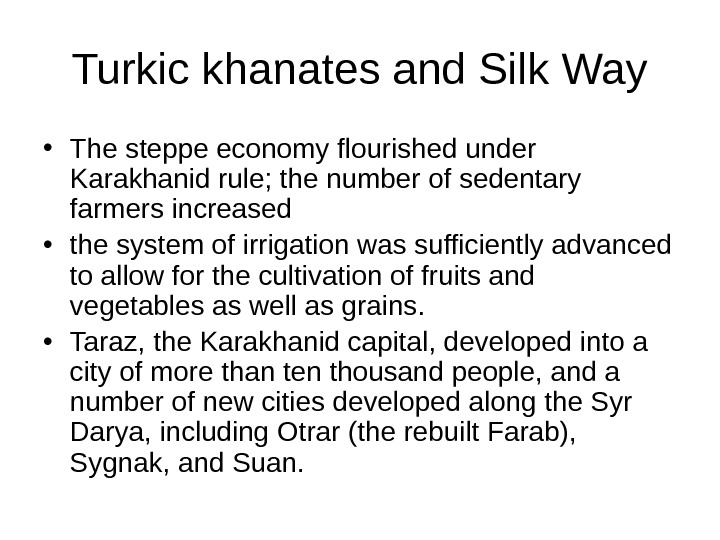 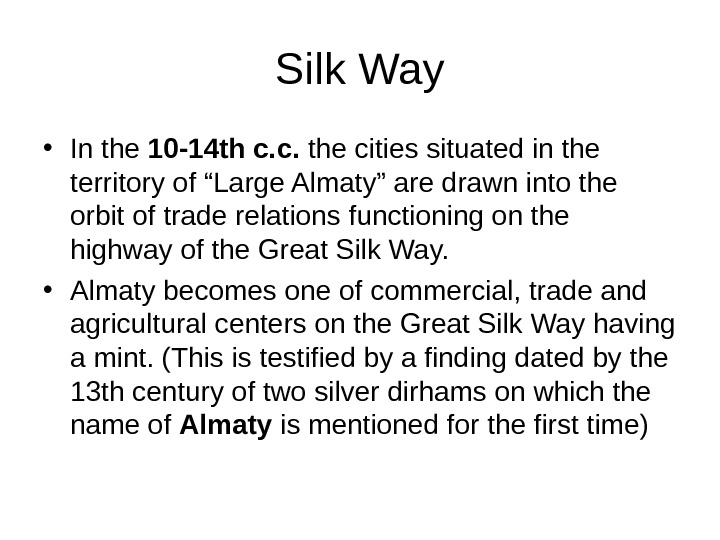 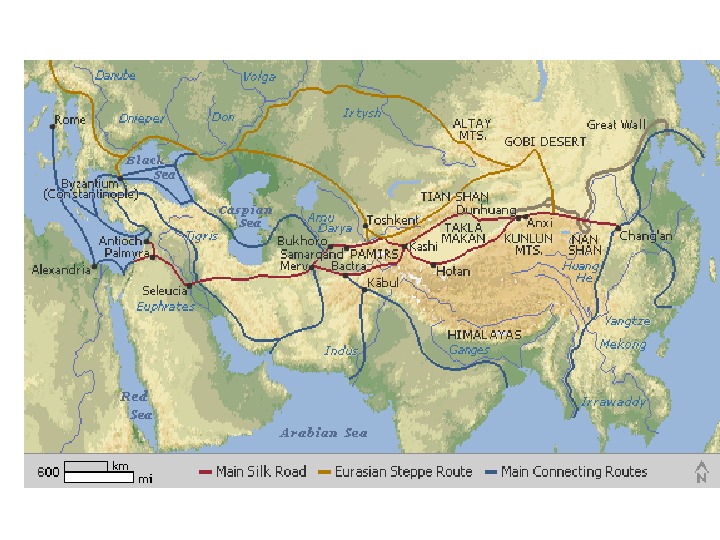 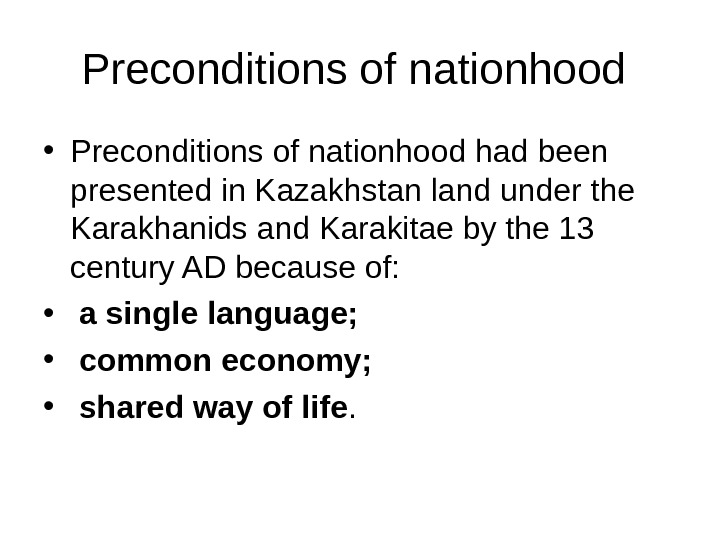 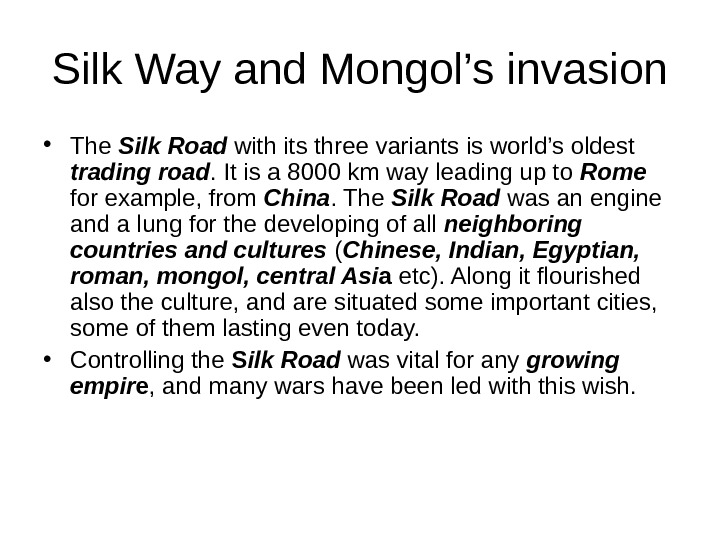 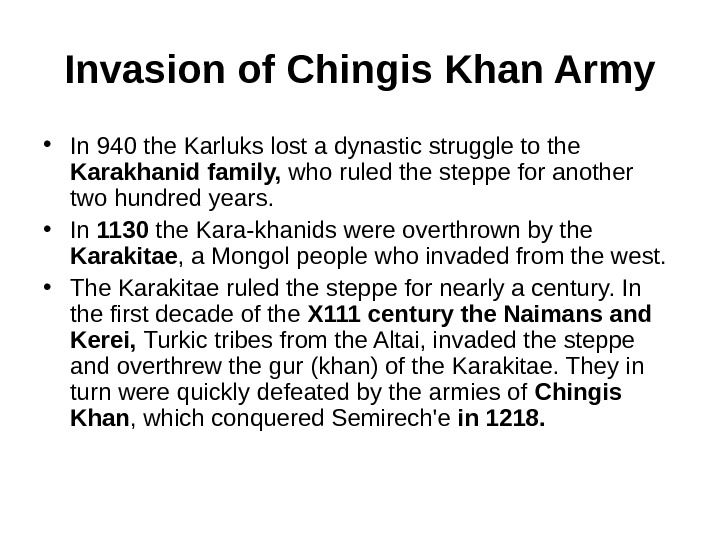 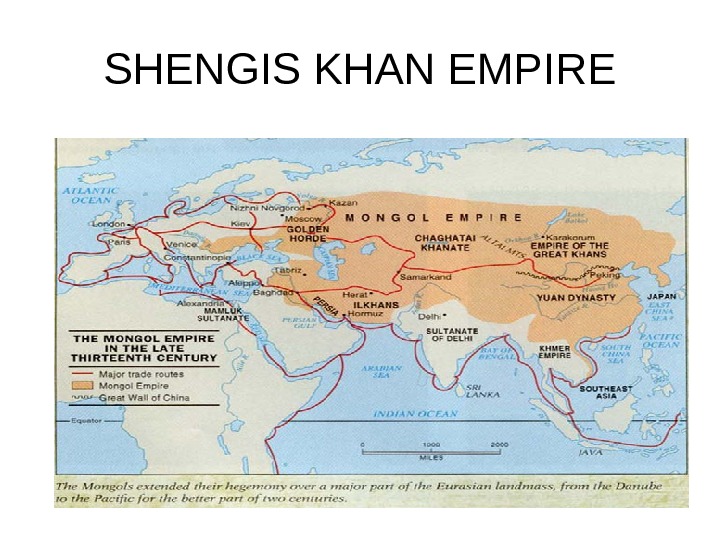 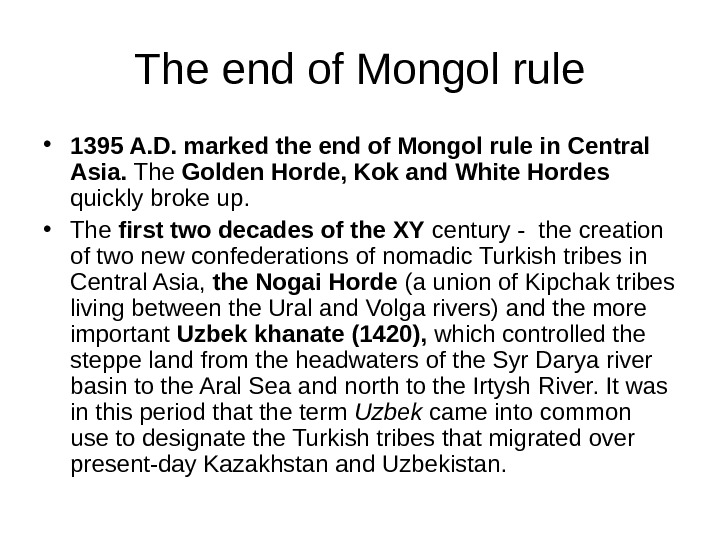 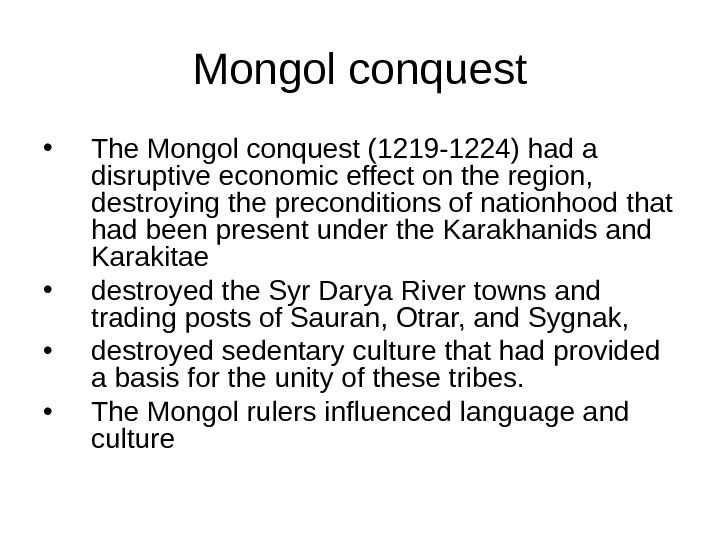 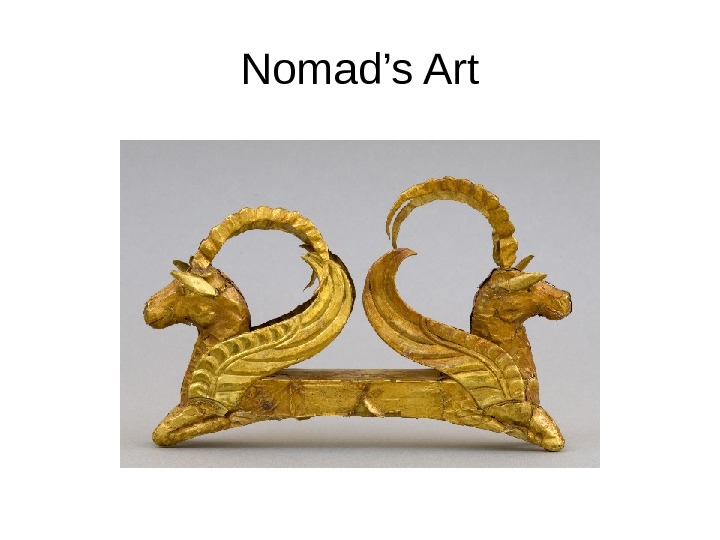 Скачать презентацию Central Eurasians. • A stereotype based on

Описание презентации Central Eurasians. • A stereotype based on по слайдам

Turkic khanates • In the 5 th and 6 th centuries a. d. , after successive invasions by the Altai Turks much of the population remained in the area, but came under the rule of the western Turkic khanates (formed from Turkic-speaking tribes from southern Kazakhstan and Semi rech’e) and then under their successor, the Turgesh khanate, with its center at Shash, near present-day Tashkent. • Turkic khanates were complex and stratified societies consisting of aristocrats, urban traders, oasis farmers, pastoral nomads, and a professional warrior class sufficiently skilled to prevent the Arab armies from crossing the Syr Darya until A. D.

Turkic khanates and Silk Way • The steppe economy flourished under Karakhanid rule; the number of sedentary farmers increased • the system of irrigation was sufficiently advanced to allow for the cultivation of fruits and vegetables as well as grains. • Taraz, the Karakhanid capital, developed into a city of more than ten thousand people, and a number of new cities developed along the Syr Darya, including Otrar (the rebuilt Farab), Sygnak, and Suan.

Silk Way • In the 10 -14 th c. c. the cities situated in the territory of “Large Almaty” are drawn into the orbit of trade relations functioning on the highway of the Great Silk Way. • Almaty becomes one of commercial, trade and agricultural centers on the Great Silk Way having a mint. (This is testified by a finding dated by the 13 th century of two silver dirhams on which the name of Almaty is mentioned for the first time)

Silk Way and Mongol’s invasion • The Silk Road with its three variants is world’s oldest trading road. It is a 8000 km way leading up to Rome for example, from China. The Silk Road was an engine and a lung for the developing of all neighboring countries and cultures ( Chinese, Indian, Egyptian, roman, mongol, central Asi a etc). Along it flourished also the culture, and are situated some important cities, some of them lasting even today. • Controlling the S ilk Road was vital for any growing empir e , and many wars have been led with this wish.

Invasion of Chingis Khan Army • In 940 the Karluks lost a dynastic struggle to the Karakhanid family, who ruled the steppe for another two hundred years. • In 1130 the Kara-khanids were overthrown by the Karakitae , a Mongol people who invaded from the west. • The Karakitae ruled the steppe for nearly a century. In the first decade of the X 111 century the Naimans and Kerei, Turkic tribes from the Altai, invaded the steppe and overthrew the gur (khan) of the Karakitae. They in turn were quickly defeated by the armies of Chingis Khan , which conquered Semirech’e in 1218.

The end of Mongol rule • 1395 A. D. marked the end of Mongol rule in Central Asia. The Golden Horde, Kok and White Hordes quickly broke up. • The first two decades of the XY century — the creation of two new confedera tions of nomadic Turkish tribes in Central Asia, the Nogai Horde (a union of Kipchak tribes living between the Ural and Volga rivers) and the more impor tant Uzbek khanate (1420), which controlled the steppe land from the head waters of the Syr Darya river basin to the Aral Sea and north to the Irtysh River. It was in this period that the term Uzbek came into common use to designate the Turkish tribes that migrated over present-day Kazakhstan and Uzbekistan.

Mongol conquest • The Mongol conquest (1219 -1224) had a disruptive economic effect on the region, destroying the preconditions of nationhood that had been present under the Karakhanids and Karakitae • destroyed the Syr Darya River towns and trading posts of Sauran, Otrar, and Sygnak, • destroyed sedentary culture that had provided a basis for the unity of these tribes. • The Mongol rulers influenced language and culture