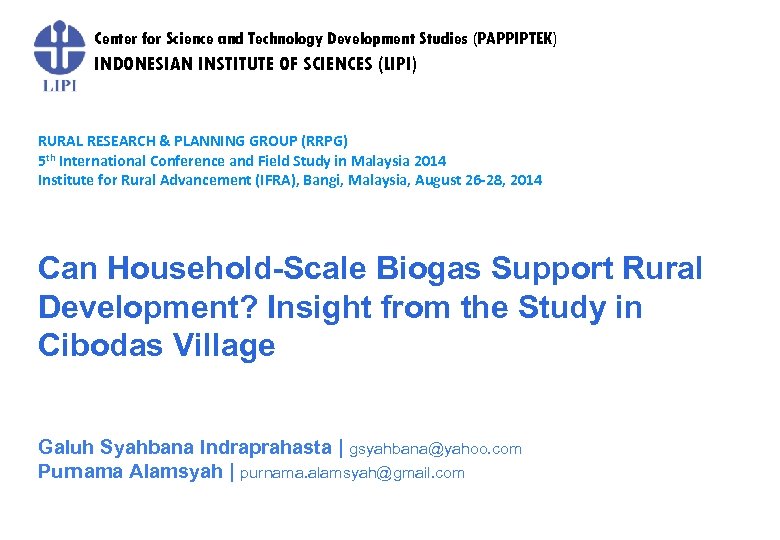 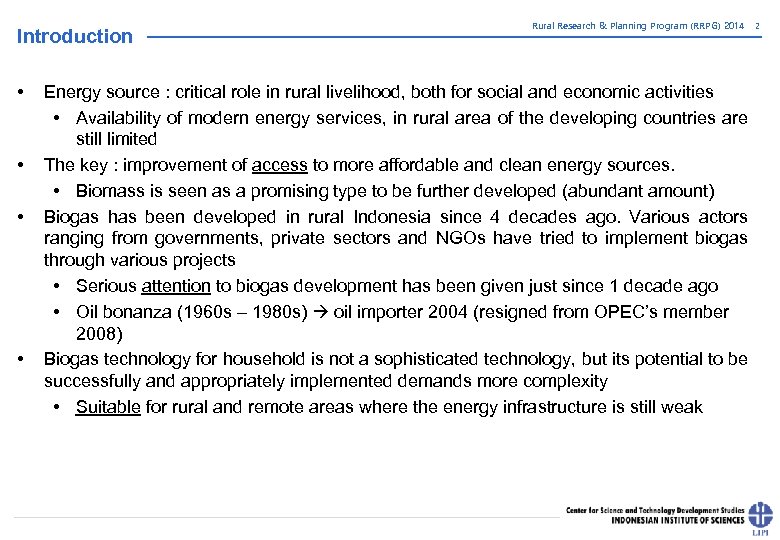 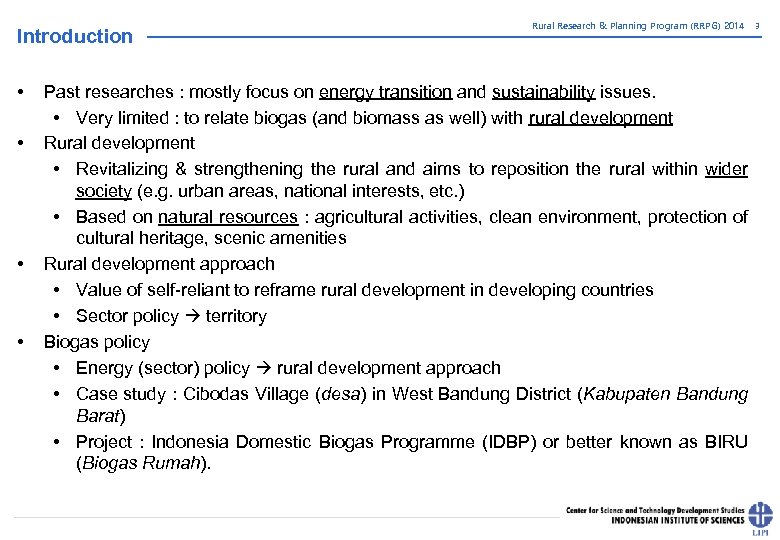 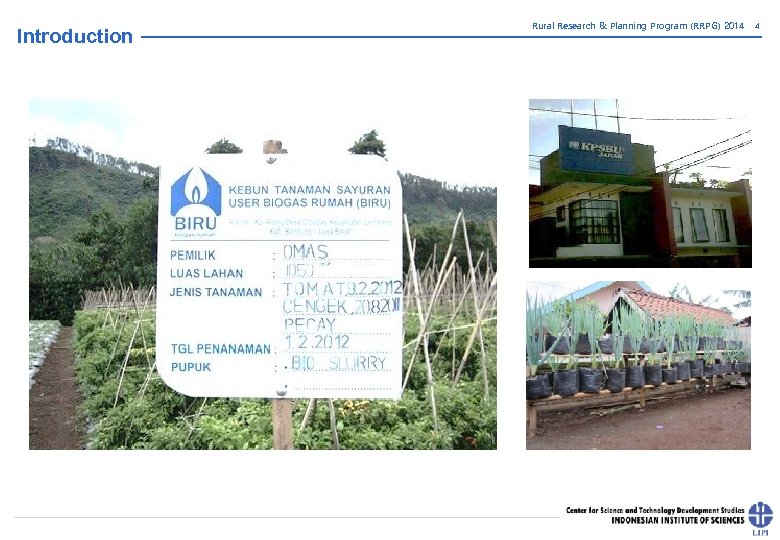 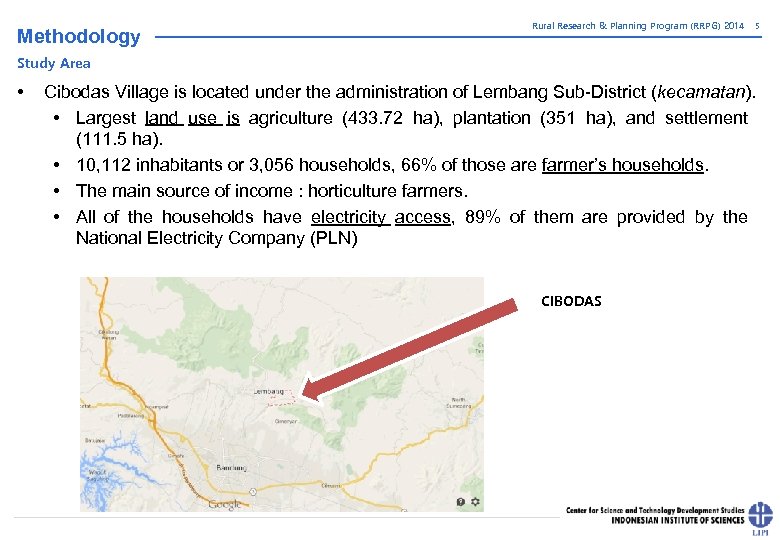 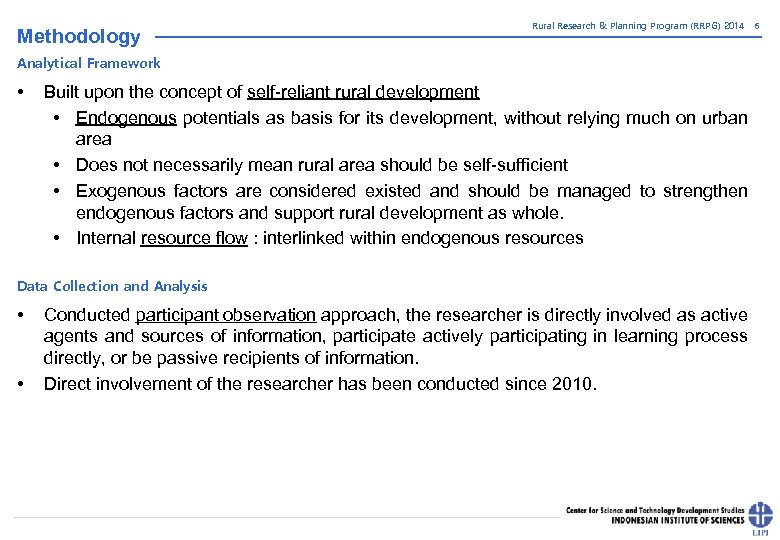 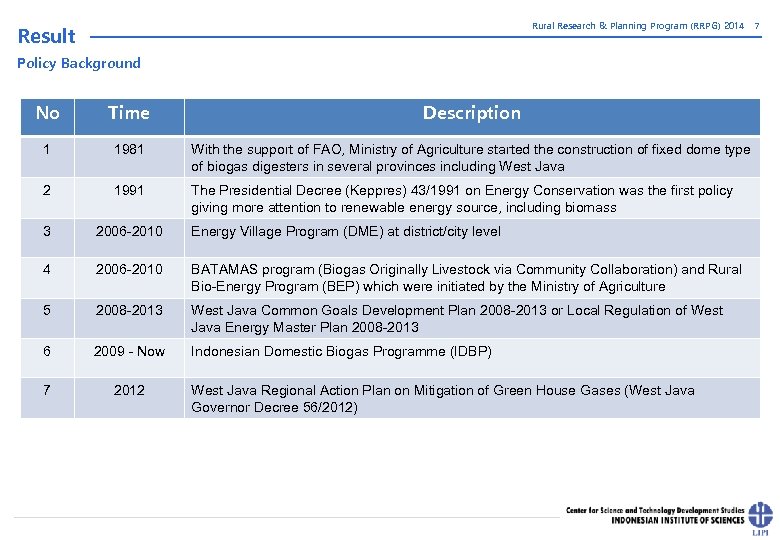 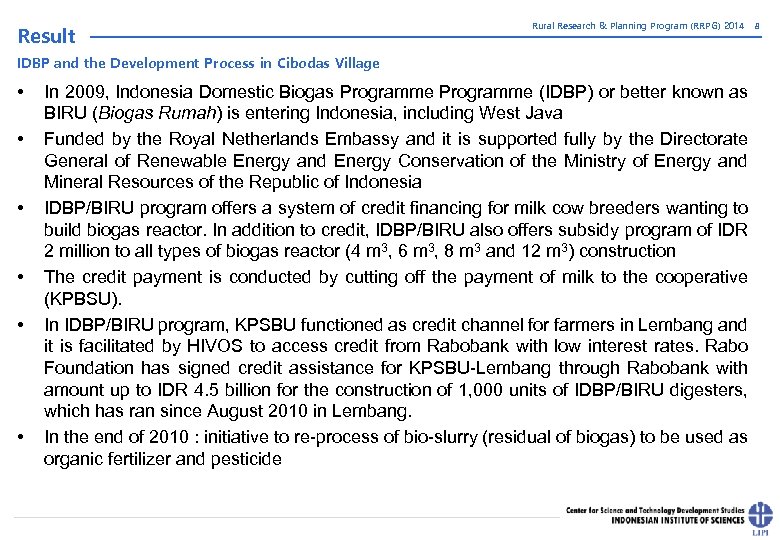 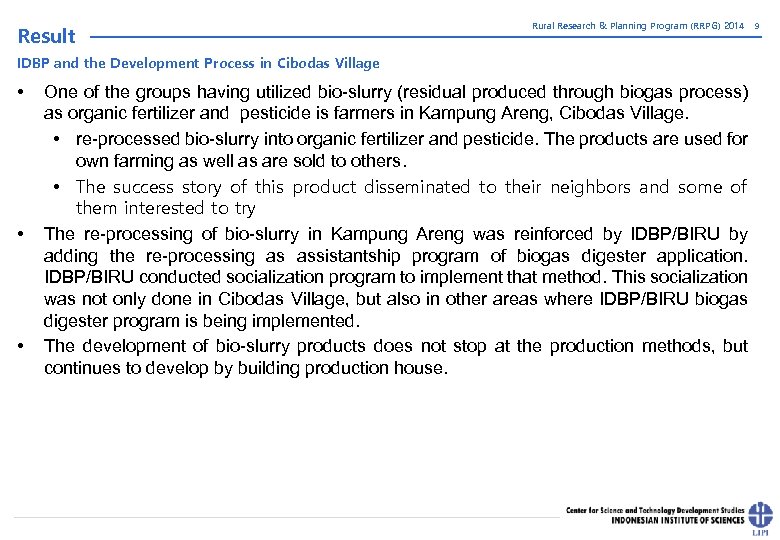 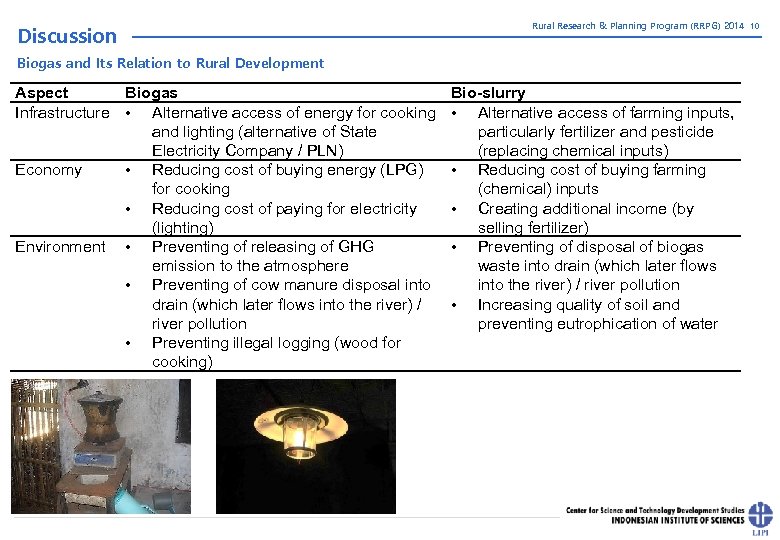 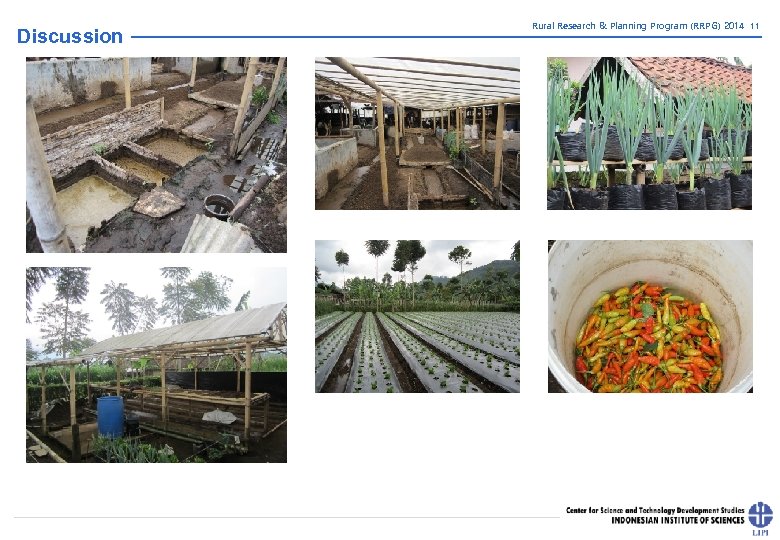 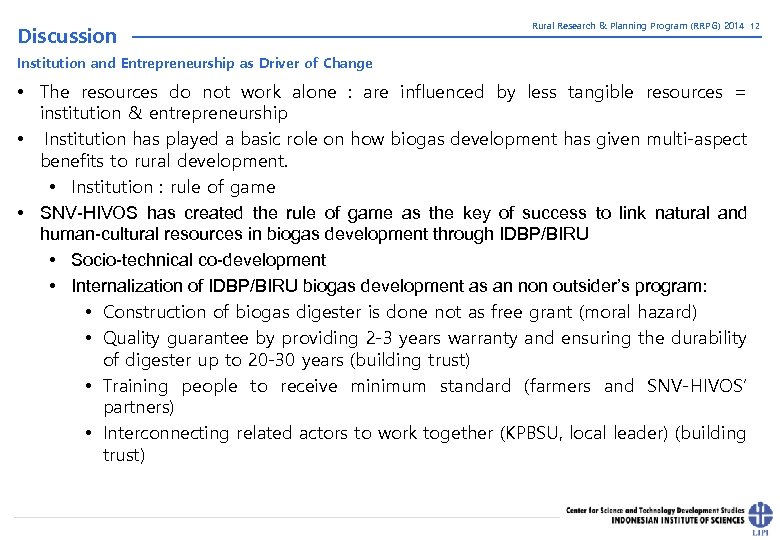 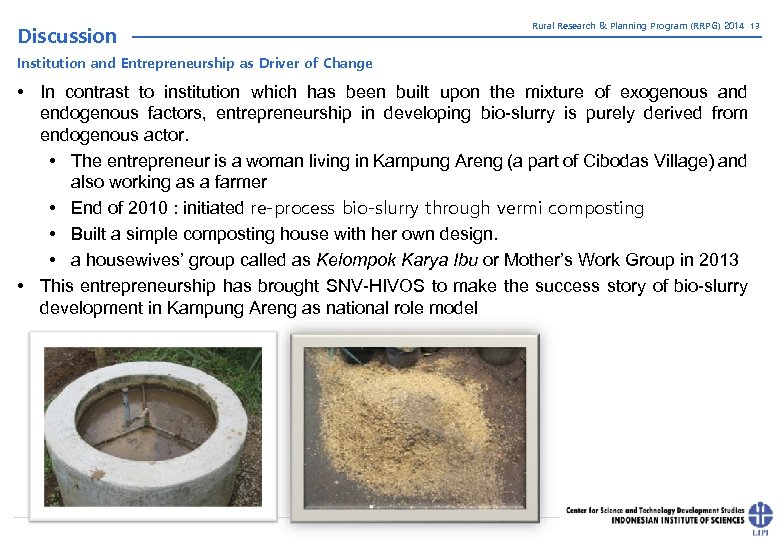 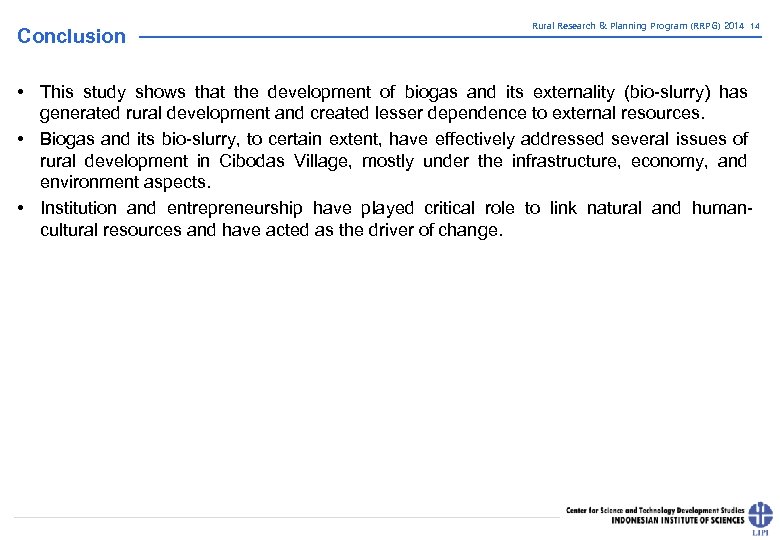 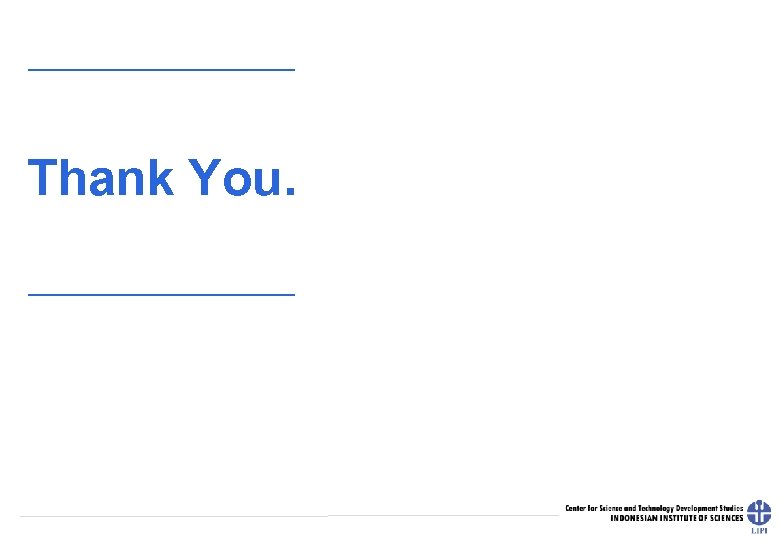 Introduction • • Rural Research & Planning Program (RRPG) 2014 Energy source : critical role in rural livelihood, both for social and economic activities • Availability of modern energy services, in rural area of the developing countries are still limited The key : improvement of access to more affordable and clean energy sources. • Biomass is seen as a promising type to be further developed (abundant amount) Biogas has been developed in rural Indonesia since 4 decades ago. Various actors ranging from governments, private sectors and NGOs have tried to implement biogas through various projects • Serious attention to biogas development has been given just since 1 decade ago • Oil bonanza (1960 s – 1980 s) oil importer 2004 (resigned from OPEC’s member 2008) Biogas technology for household is not a sophisticated technology, but its potential to be successfully and appropriately implemented demands more complexity • Suitable for rural and remote areas where the energy infrastructure is still weak 2

Methodology Rural Research & Planning Program (RRPG) 2014 5 Study Area • Cibodas Village is located under the administration of Lembang Sub-District (kecamatan). • Largest land use is agriculture (433. 72 ha), plantation (351 ha), and settlement (111. 5 ha). • 10, 112 inhabitants or 3, 056 households, 66% of those are farmer’s households. • The main source of income : horticulture farmers. • All of the households have electricity access, 89% of them are provided by the National Electricity Company (PLN) CIBODAS

Methodology Rural Research & Planning Program (RRPG) 2014 Analytical Framework • Built upon the concept of self-reliant rural development • Endogenous potentials as basis for its development, without relying much on urban area • Does not necessarily mean rural area should be self-sufficient • Exogenous factors are considered existed and should be managed to strengthen endogenous factors and support rural development as whole. • Internal resource flow : interlinked within endogenous resources Data Collection and Analysis • • Conducted participant observation approach, the researcher is directly involved as active agents and sources of information, participate actively participating in learning process directly, or be passive recipients of information. Direct involvement of the researcher has been conducted since 2010. 6

Result Rural Research & Planning Program (RRPG) 2014 IDBP and the Development Process in Cibodas Village • • • In 2009, Indonesia Domestic Biogas Programme (IDBP) or better known as BIRU (Biogas Rumah) is entering Indonesia, including West Java Funded by the Royal Netherlands Embassy and it is supported fully by the Directorate General of Renewable Energy and Energy Conservation of the Ministry of Energy and Mineral Resources of the Republic of Indonesia IDBP/BIRU program offers a system of credit financing for milk cow breeders wanting to build biogas reactor. In addition to credit, IDBP/BIRU also offers subsidy program of IDR 2 million to all types of biogas reactor (4 m 3, 6 m 3, 8 m 3 and 12 m 3) construction The credit payment is conducted by cutting off the payment of milk to the cooperative (KPBSU). In IDBP/BIRU program, KPSBU functioned as credit channel for farmers in Lembang and it is facilitated by HIVOS to access credit from Rabobank with low interest rates. Rabo Foundation has signed credit assistance for KPSBU-Lembang through Rabobank with amount up to IDR 4. 5 billion for the construction of 1, 000 units of IDBP/BIRU digesters, which has ran since August 2010 in Lembang. In the end of 2010 : initiative to re-process of bio-slurry (residual of biogas) to be used as organic fertilizer and pesticide 8

Result Rural Research & Planning Program (RRPG) 2014 IDBP and the Development Process in Cibodas Village • • • One of the groups having utilized bio-slurry (residual produced through biogas process) as organic fertilizer and pesticide is farmers in Kampung Areng, Cibodas Village. • re-processed bio-slurry into organic fertilizer and pesticide. The products are used for own farming as well as are sold to others. • The success story of this product disseminated to their neighbors and some of them interested to try The re-processing of bio-slurry in Kampung Areng was reinforced by IDBP/BIRU by adding the re-processing as assistantship program of biogas digester application. IDBP/BIRU conducted socialization program to implement that method. This socialization was not only done in Cibodas Village, but also in other areas where IDBP/BIRU biogas digester program is being implemented. The development of bio-slurry products does not stop at the production methods, but continues to develop by building production house. 9

Discussion Rural Research & Planning Program (RRPG) 2014 12 Institution and Entrepreneurship as Driver of Change • The resources do not work alone : are influenced by less tangible resources = institution & entrepreneurship • Institution has played a basic role on how biogas development has given multi-aspect benefits to rural development. • Institution : rule of game • SNV-HIVOS has created the rule of game as the key of success to link natural and human-cultural resources in biogas development through IDBP/BIRU • Socio-technical co-development • Internalization of IDBP/BIRU biogas development as an non outsider’s program: • Construction of biogas digester is done not as free grant (moral hazard) • Quality guarantee by providing 2 -3 years warranty and ensuring the durability of digester up to 20 -30 years (building trust) • Training people to receive minimum standard (farmers and SNV-HIVOS’ partners) • Interconnecting related actors to work together (KPBSU, local leader) (building trust)

Discussion Rural Research & Planning Program (RRPG) 2014 13 Institution and Entrepreneurship as Driver of Change • In contrast to institution which has been built upon the mixture of exogenous and endogenous factors, entrepreneurship in developing bio-slurry is purely derived from endogenous actor. • The entrepreneur is a woman living in Kampung Areng (a part of Cibodas Village) and also working as a farmer • End of 2010 : initiated re-process bio-slurry through vermi composting • Built a simple composting house with her own design. • a housewives’ group called as Kelompok Karya Ibu or Mother’s Work Group in 2013 • This entrepreneurship has brought SNV-HIVOS to make the success story of bio-slurry development in Kampung Areng as national role model

Conclusion Rural Research & Planning Program (RRPG) 2014 14 • This study shows that the development of biogas and its externality (bio-slurry) has generated rural development and created lesser dependence to external resources. • Biogas and its bio-slurry, to certain extent, have effectively addressed several issues of rural development in Cibodas Village, mostly under the infrastructure, economy, and environment aspects. • Institution and entrepreneurship have played critical role to link natural and humancultural resources and have acted as the driver of change.