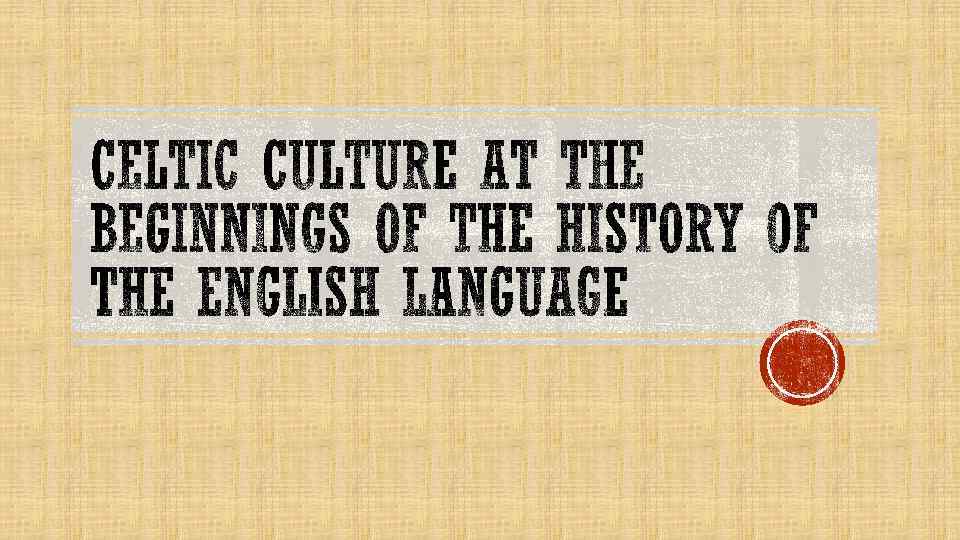 Celtic culture at the beginnings of the history.pptx

§ Celtic culture belongs to the basic foundations of a number of modern cultures of West and Central Europe. Several of Celtic peoples exist today. An original art of the Celts is still amazes and professional art, and a wide range of first-class, and religion, embodied their subtle and complex world perception, it remains a mystery. Even after a single Celtic civilization has gone from the stage of history, its heritage in different forms not just experiencing a revival.

§ - They are the only ones among the nations made from molten glass bracelets that do not have stitches. § - The Celts received copper, tin, lead, mercury from deep deposits. § - Their carts for horse harnesses were the best in Europe. § - The Celts metallurgists first in Europe learned to produce iron and steel. § - They have mastered the rinsing the of gold at the Alpine rivers, whose production was measured in tons.

§ From 800 BCIt begins the era of the British Celts and, accordingly, the Celtic language in Britain. Many linguists are of the opinion that the word "Britain" comes from the word with Celtic roots - brith "painted". In the annals of references you can find that the Celts really painted their faces and bodies when going to war or hunting. § Also mentioned in the annals of the British Celts spoke a special dialect. § But words such as whiskey, plaid, slogan came into English much later of Celtic languages that were common in that period: whiskey (HDI. Uisce beathadh "water of life"), slogan (from the Scottish sluaghghairm "battle cry ").

§ Roman writers have left impressions in his memoirs about the contacts with the Druids. These certificates mixed respect for knowledge of priests and an aversion to the bloodthirsty nature of the magic of the Celts. In the 60 years before the new era Archdruid Divitsiakus peacefully conversed with the Roman philosopher Cicero. And by his contemporary Julius Caesar two years later went to war against the Celts of Gaul, and seizing the territory of the current Belgium, the Netherlands and partly in Switzerland, and later he won the part of Britain. § Caesar's legions destroyed 800 cities, according to the latest estimates of the French scientists, the legionnaires destroyed or taken into slavery about two million people. Celtic tribes in western Europe have gone from the scene.

Physics of Semiconductor Devices Lecture 5. The