CDs are also called Certificates of Deposit They 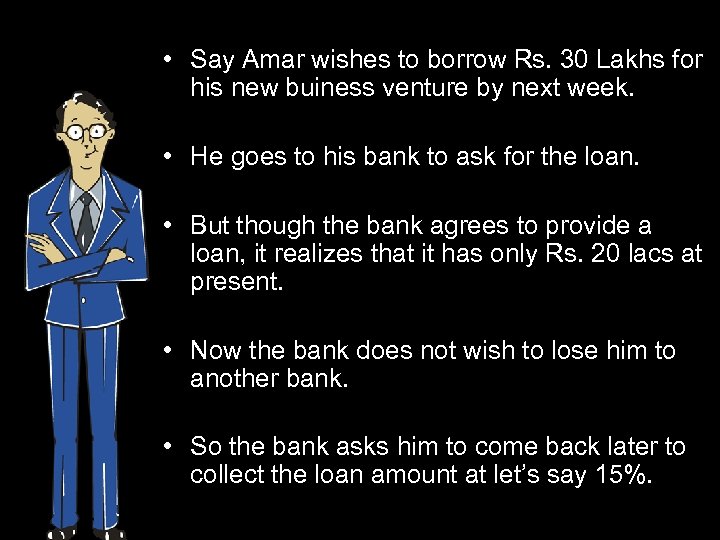 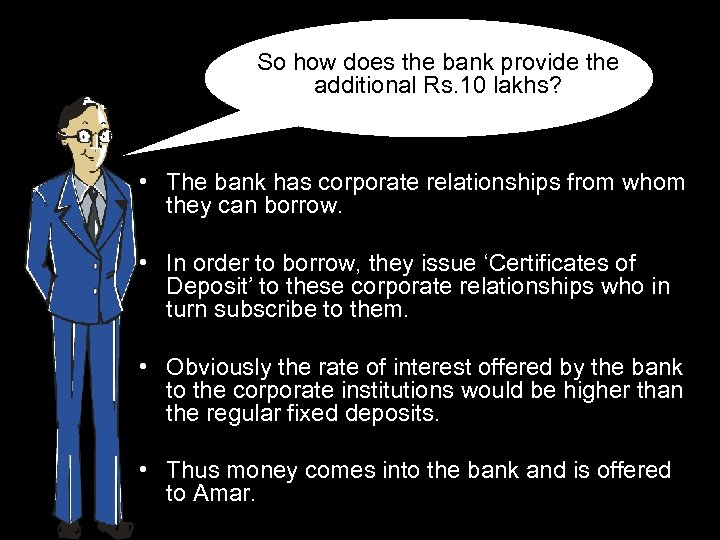 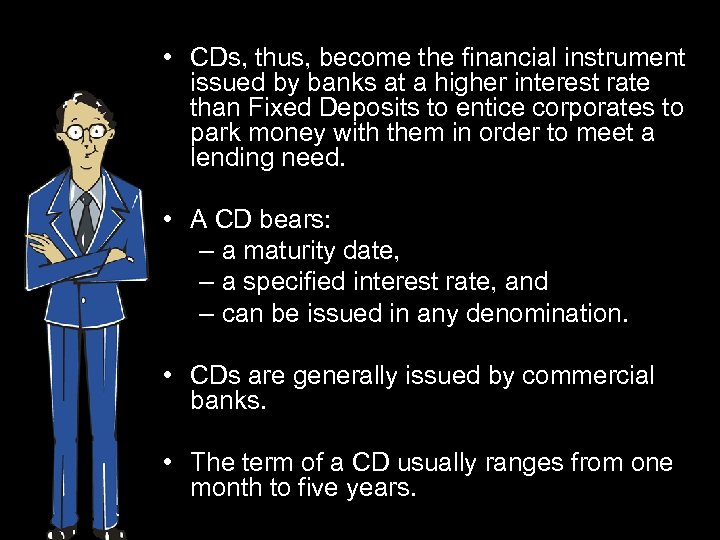 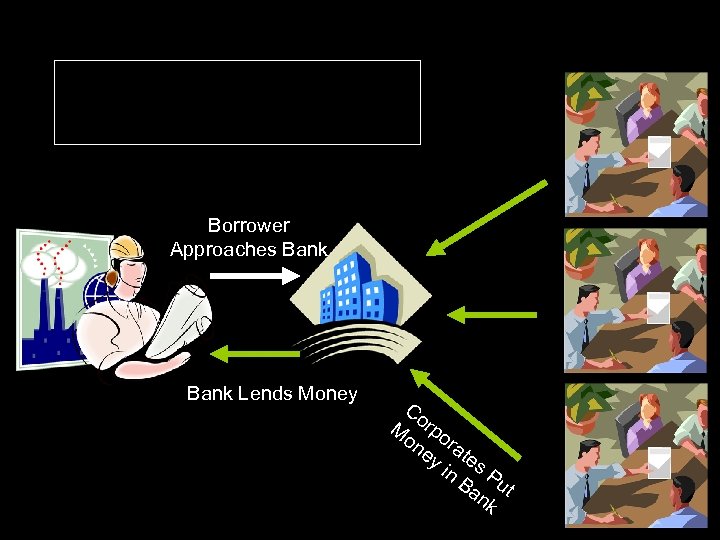 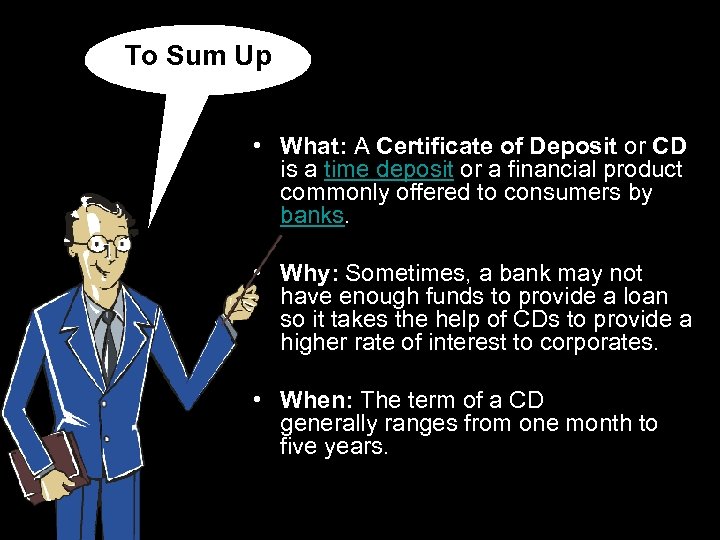 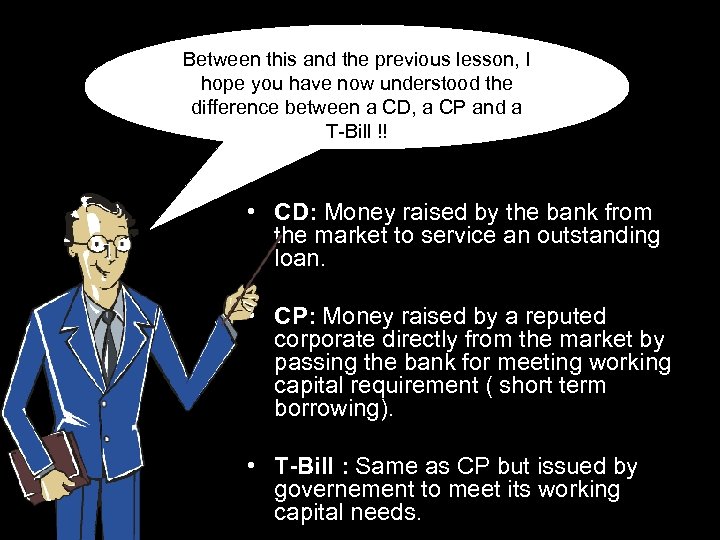 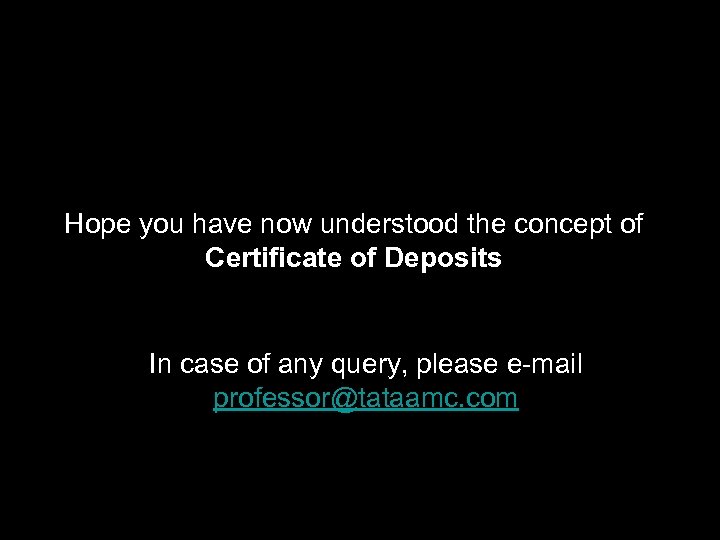 Скачать презентацию CDs are also called Certificates of Deposit They

CDs are also called Certificates of Deposit. They are financial instruments…. . We have heard this time and again. But what do CDs actually mean? Who issues them? ? Who subscribes to them? ? ? Let me explain this to you with an example…

• Say Amar wishes to borrow Rs. 30 Lakhs for his new buiness venture by next week. • He goes to his bank to ask for the loan. • But though the bank agrees to provide a loan, it realizes that it has only Rs. 20 lacs at present. • Now the bank does not wish to lose him to another bank. • So the bank asks him to come back later to collect the loan amount at let’s say 15%.

So how does the bank provide the additional Rs. 10 lakhs? • The bank has corporate relationships from whom they can borrow. • In order to borrow, they issue ‘Certificates of Deposit’ to these corporate relationships who in turn subscribe to them. • Obviously the rate of interest offered by the bank to the corporate institutions would be higher than the regular fixed deposits. • Thus money comes into the bank and is offered to Amar.

• CDs, thus, become the financial instrument issued by banks at a higher interest rate than Fixed Deposits to entice corporates to park money with them in order to meet a lending need. • A CD bears: – a maturity date, – a specified interest rate, and – can be issued in any denomination. • CDs are generally issued by commercial banks. • The term of a CD usually ranges from one month to five years.

You may wonder why Amar did not raise money through CPs as he could have gained through dis-intermediation… (Refer to previous lesson on CP) This was not possible because: - – Amar’s organization was not very well reputed which could issue highly rated “Corporate Papers” – His only option was to go through his bank unlike well reputed organizations who can afford to go directly to the market to raise money. – In other words, . Amar needed the intermediation provided by banks.

To Sum Up • What: A Certificate of Deposit or CD is a time deposit or a financial product commonly offered to consumers by banks. • Why: Sometimes, a bank may not have enough funds to provide a loan so it takes the help of CDs to provide a higher rate of interest to corporates. • When: The term of a CD generally ranges from one month to five years.

Between this and the previous lesson, I hope you have now understood the difference between a CD, a CP and a T-Bill !! • CD: Money raised by the bank from the market to service an outstanding loan. • CP: Money raised by a reputed corporate directly from the market by passing the bank for meeting working capital requirement ( short term borrowing). • T-Bill : Same as CP but issued by governement to meet its working capital needs.

Hope you have now understood the concept of Certificate of Deposits In case of any query, please e-mail [email protected] com