Casinos have best year yet 1 34 billion 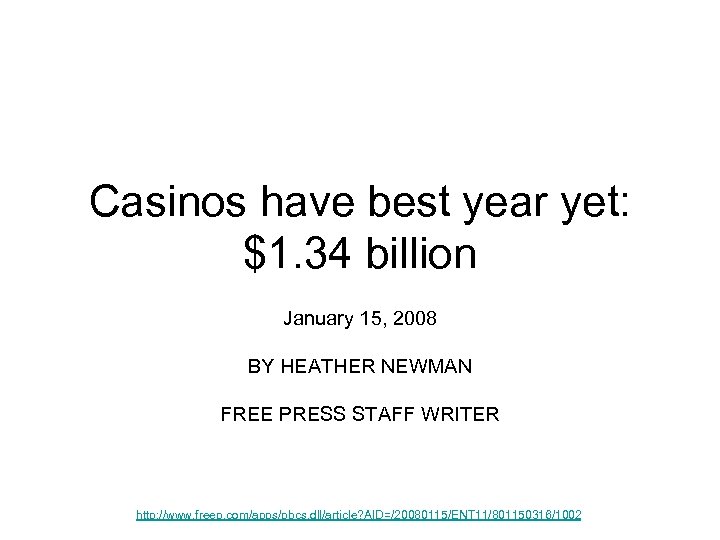 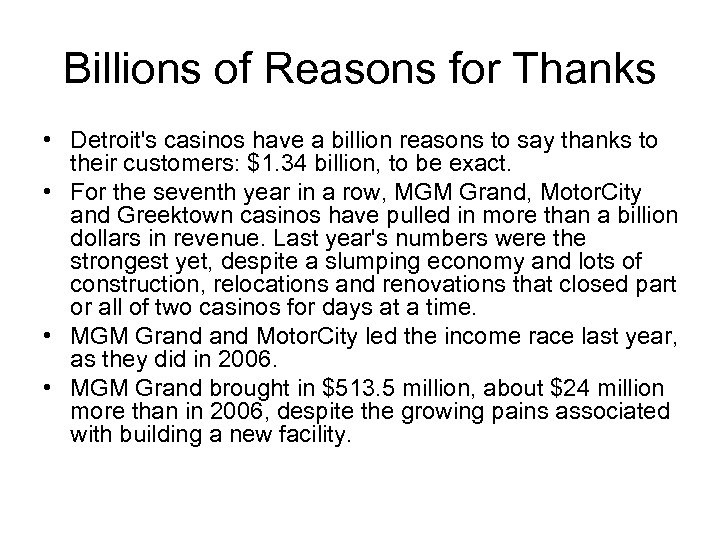 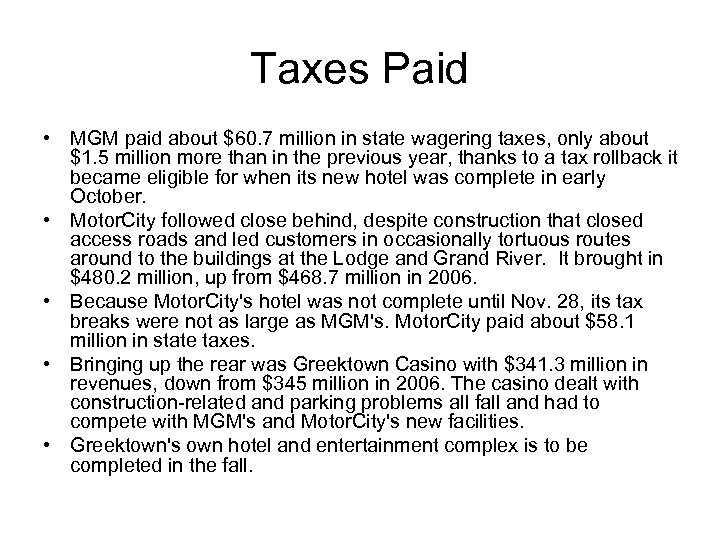 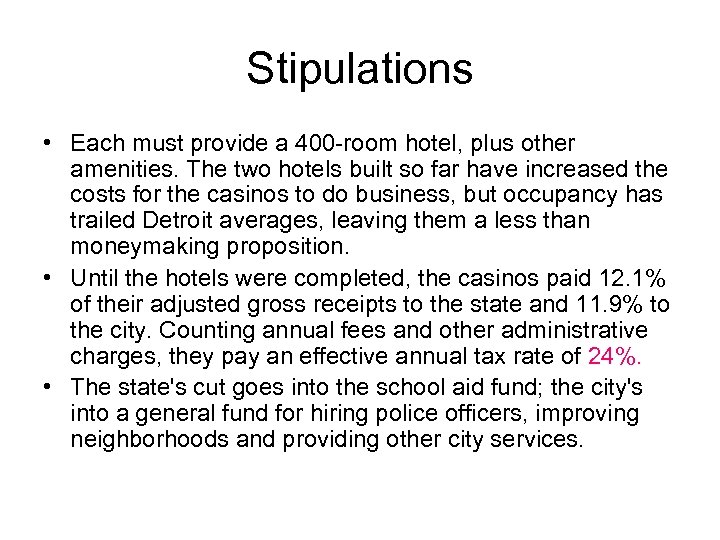 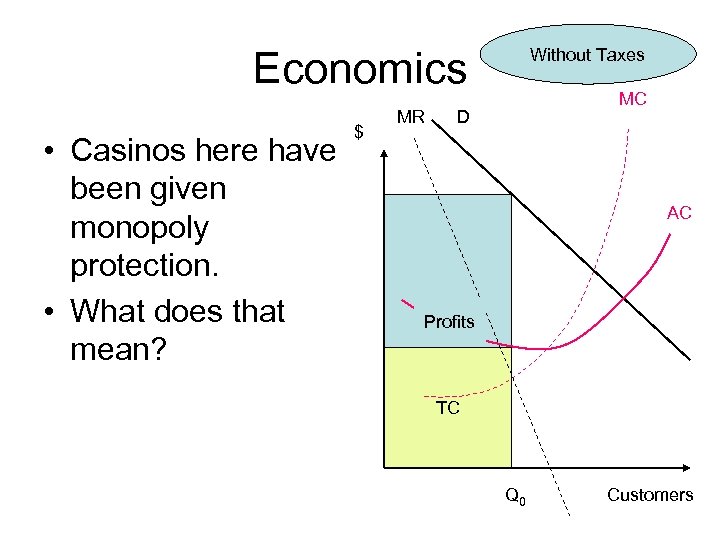 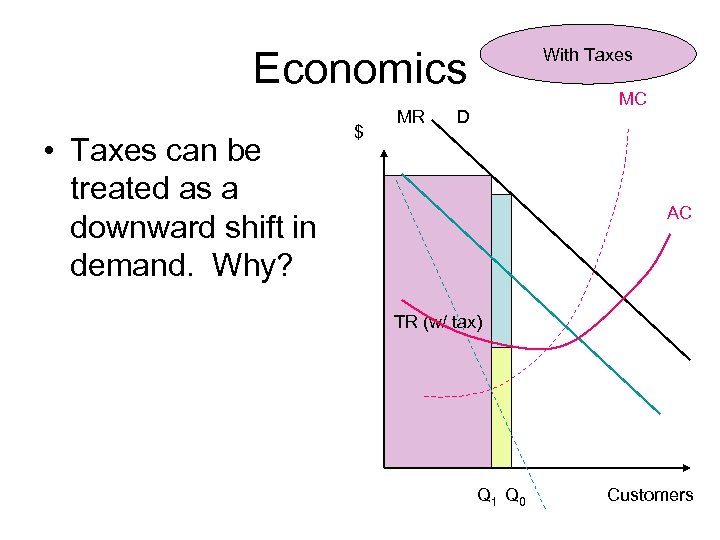 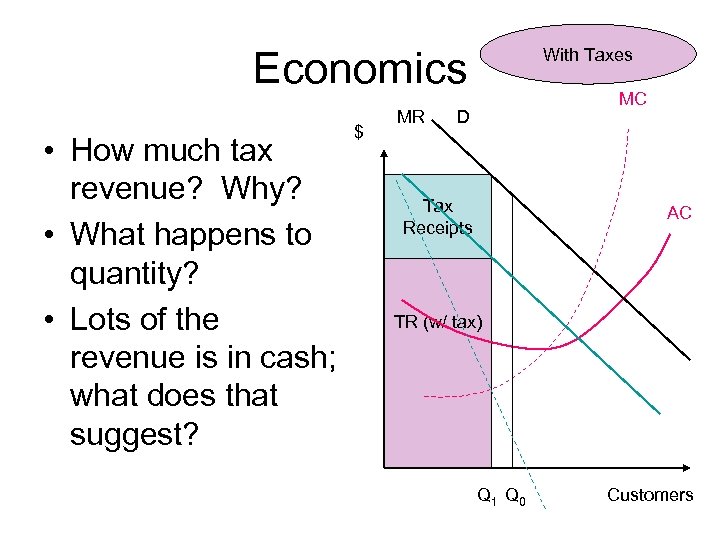 Billions of Reasons for Thanks • Detroit's casinos have a billion reasons to say thanks to their customers: $1. 34 billion, to be exact. • For the seventh year in a row, MGM Grand, Motor. City and Greektown casinos have pulled in more than a billion dollars in revenue. Last year's numbers were the strongest yet, despite a slumping economy and lots of construction, relocations and renovations that closed part or all of two casinos for days at a time. • MGM Grand Motor. City led the income race last year, as they did in 2006. • MGM Grand brought in $513. 5 million, about $24 million more than in 2006, despite the growing pains associated with building a new facility.

Taxes Paid • MGM paid about $60. 7 million in state wagering taxes, only about $1. 5 million more than in the previous year, thanks to a tax rollback it became eligible for when its new hotel was complete in early October. • Motor. City followed close behind, despite construction that closed access roads and led customers in occasionally tortuous routes around to the buildings at the Lodge and Grand River. It brought in $480. 2 million, up from $468. 7 million in 2006. • Because Motor. City's hotel was not complete until Nov. 28, its tax breaks were not as large as MGM's. Motor. City paid about $58. 1 million in state taxes. • Bringing up the rear was Greektown Casino with $341. 3 million in revenues, down from $345 million in 2006. The casino dealt with construction-related and parking problems all fall and had to compete with MGM's and Motor. City's new facilities. • Greektown's own hotel and entertainment complex is to be completed in the fall.

Stipulations • Each must provide a 400 -room hotel, plus other amenities. The two hotels built so far have increased the costs for the casinos to do business, but occupancy has trailed Detroit averages, leaving them a less than moneymaking proposition. • Until the hotels were completed, the casinos paid 12. 1% of their adjusted gross receipts to the state and 11. 9% to the city. Counting annual fees and other administrative charges, they pay an effective annual tax rate of 24%. • The state's cut goes into the school aid fund; the city's into a general fund for hiring police officers, improving neighborhoods and providing other city services.

Economics • Casinos here have been given monopoly protection. • What does that mean? $ MR Without Taxes MC D AC Profits TR TC Q 0 Customers

Economics • How much tax revenue? Why? • What happens to quantity? • Lots of the revenue is in cash; what does that suggest? $ MR With Taxes MC D Tax Receipts AC TR (w/ tax) Q 1 Q 0 Customers