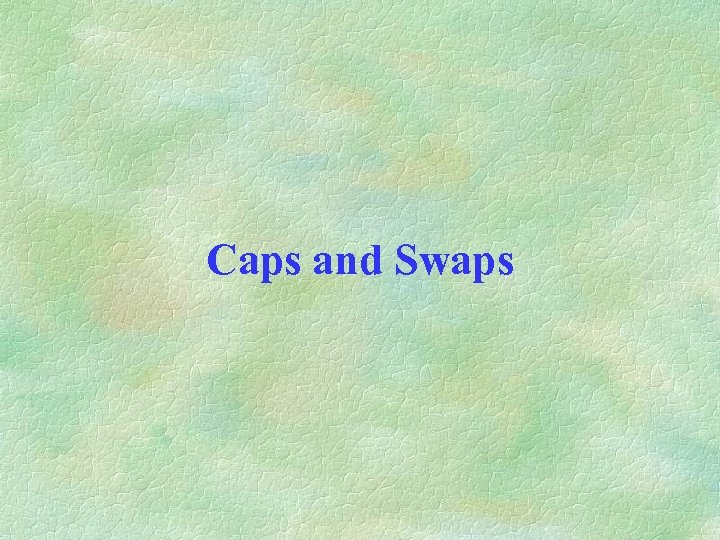 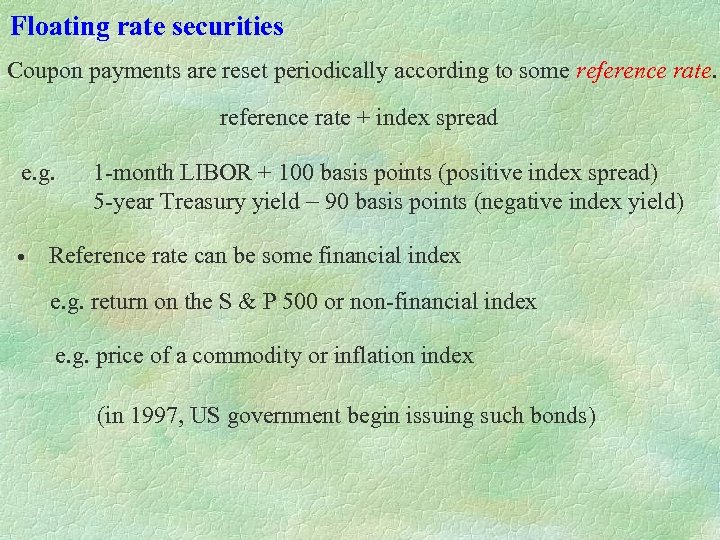 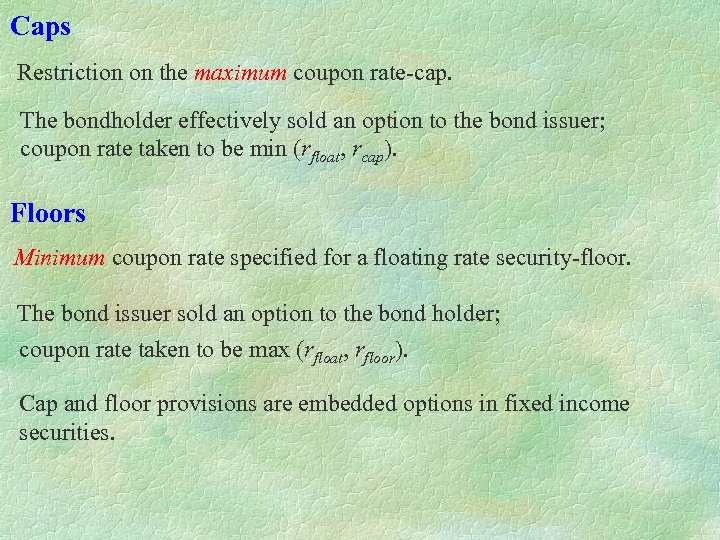 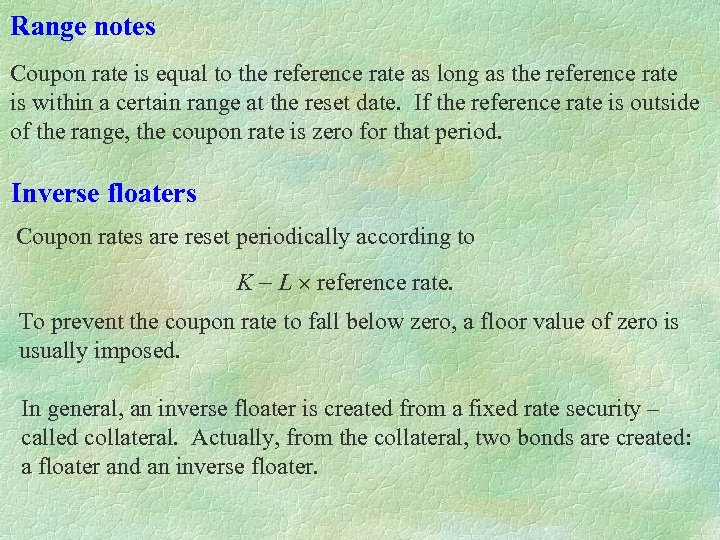 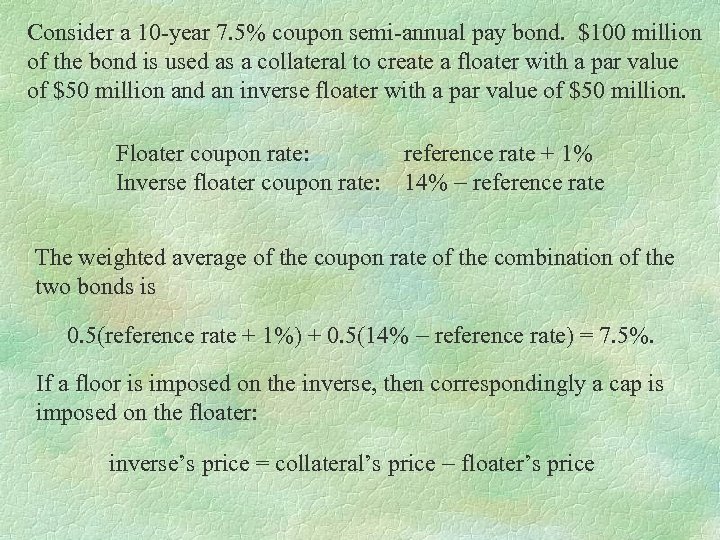 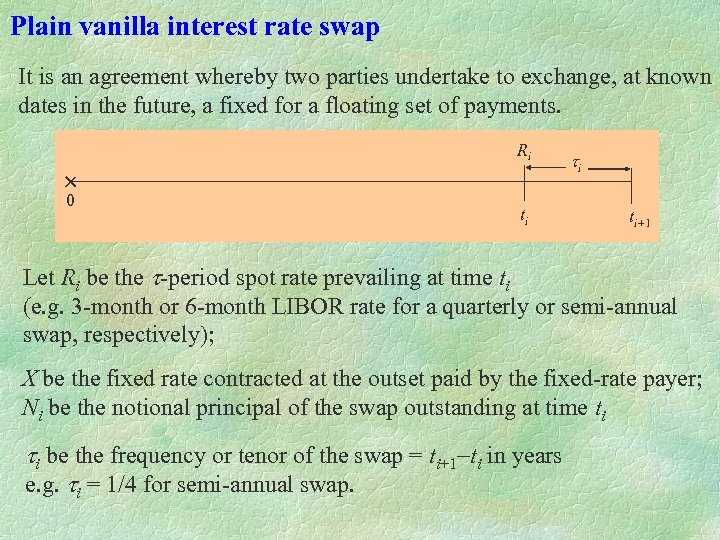 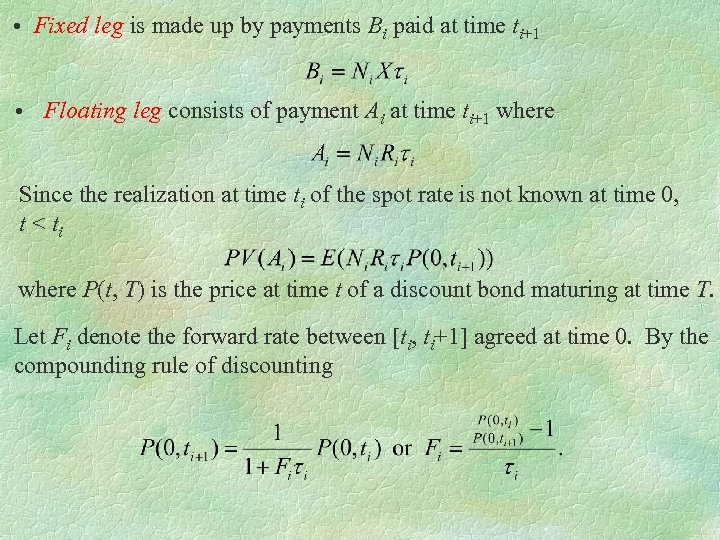 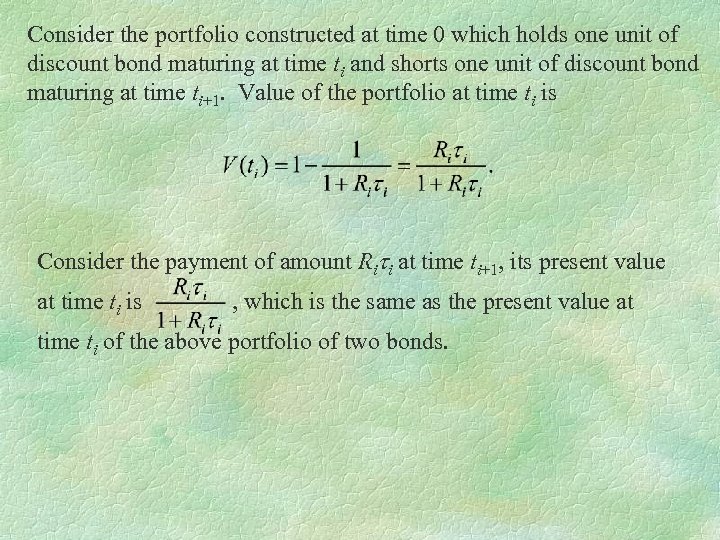 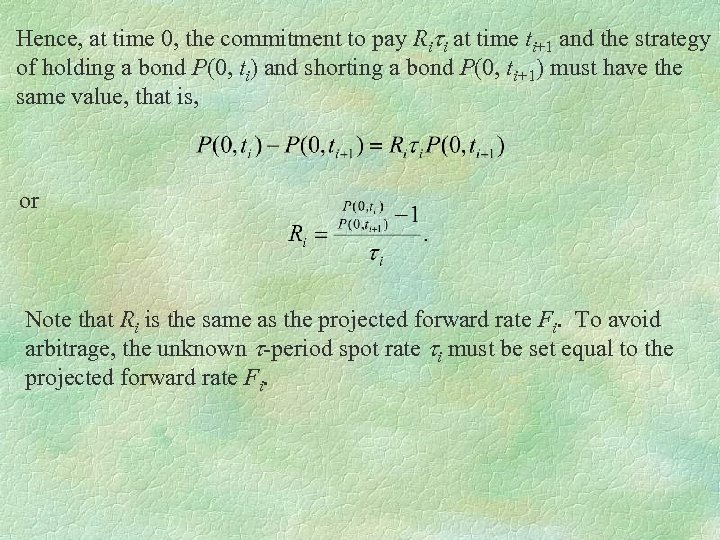 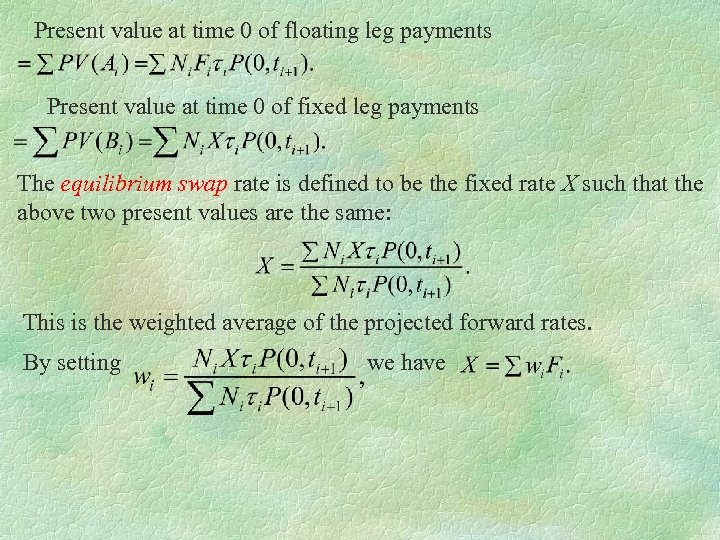 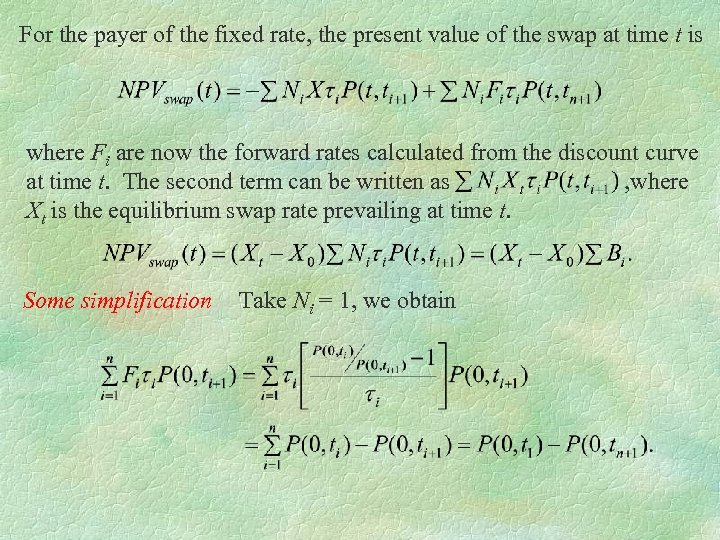 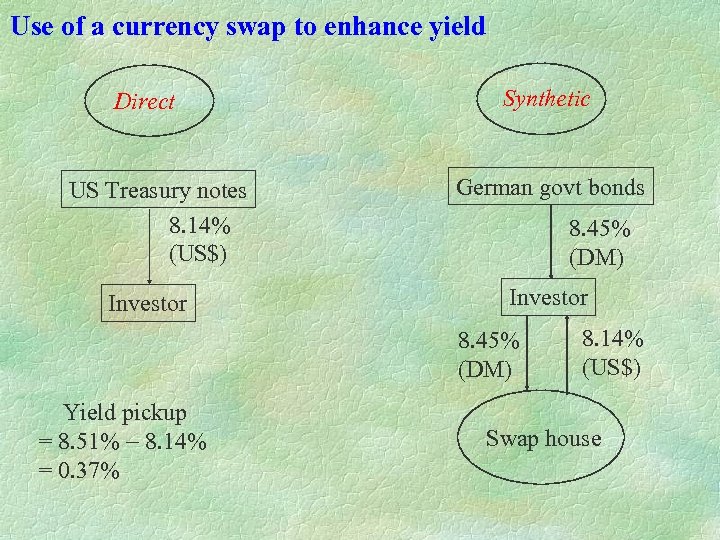 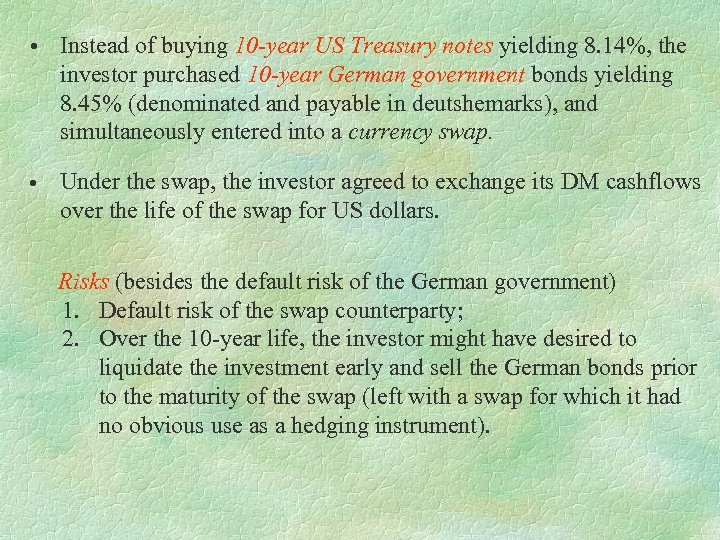 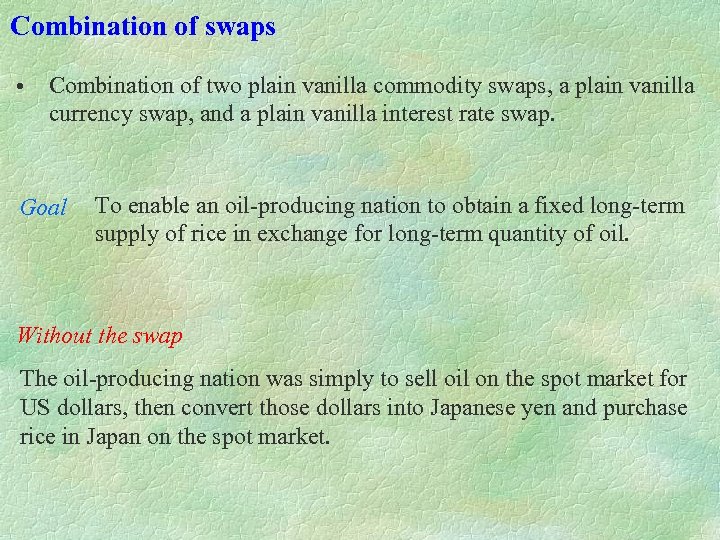 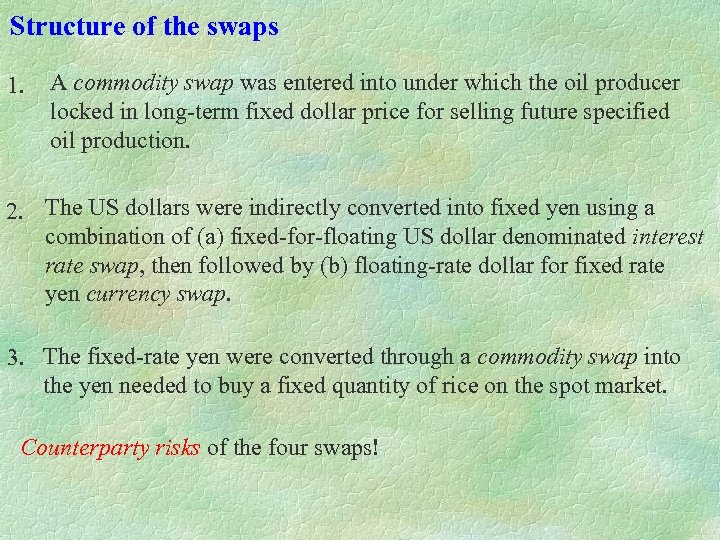 Plain vanilla interest rate swap It is an agreement whereby two parties undertake to exchange, at known dates in the future, a fixed for a floating set of payments. Ri 0 ti ti ti+1 Let Ri be the t-period spot rate prevailing at time ti (e. g. 3 -month or 6 -month LIBOR rate for a quarterly or semi-annual swap, respectively); X be the fixed rate contracted at the outset paid by the fixed-rate payer; Ni be the notional principal of the swap outstanding at time ti ti be the frequency or tenor of the swap = ti+1 -ti in years e. g. ti = 1/4 for semi-annual swap.

• Fixed leg is made up by payments Bi paid at time ti+1 • Floating leg consists of payment Ai at time ti+1 where Since the realization at time ti of the spot rate is not known at time 0, t < ti where P(t, T) is the price at time t of a discount bond maturing at time T. Let Fi denote the forward rate between [ti, ti+1] agreed at time 0. By the compounding rule of discounting

For the payer of the fixed rate, the present value of the swap at time t is where Fi are now the forward rates calculated from the discount curve at time t. The second term can be written as , where Xt is the equilibrium swap rate prevailing at time t. Some simplification Take Ni = 1, we obtain

• Instead of buying 10 -year US Treasury notes yielding 8. 14%, the investor purchased 10 -year German government bonds yielding 8. 45% (denominated and payable in deutshemarks), and simultaneously entered into a currency swap. • Under the swap, the investor agreed to exchange its DM cashflows over the life of the swap for US dollars. Risks (besides the default risk of the German government) 1. Default risk of the swap counterparty; 2. Over the 10 -year life, the investor might have desired to liquidate the investment early and sell the German bonds prior to the maturity of the swap (left with a swap for which it had no obvious use as a hedging instrument).

Structure of the swaps 1. A commodity swap was entered into under which the oil producer locked in long-term fixed dollar price for selling future specified oil production. 2. The US dollars were indirectly converted into fixed yen using a combination of (a) fixed-for-floating US dollar denominated interest rate swap, then followed by (b) floating-rate dollar for fixed rate yen currency swap. 3. The fixed-rate yen were converted through a commodity swap into the yen needed to buy a fixed quantity of rice on the spot market. Counterparty risks of the four swaps!