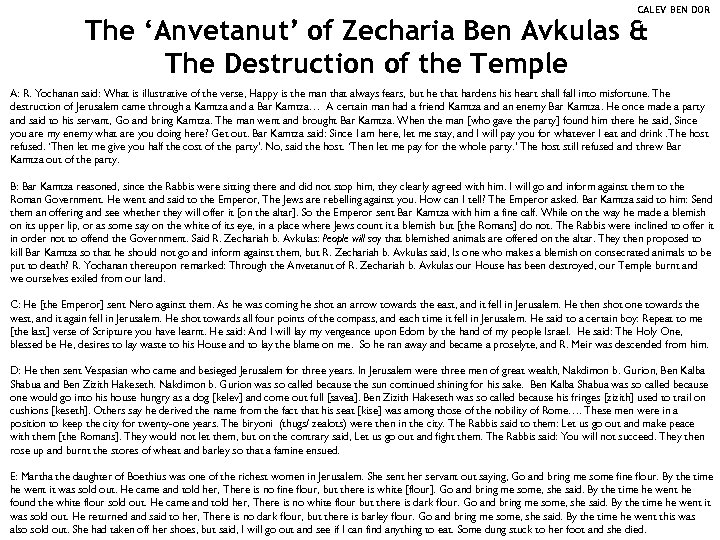 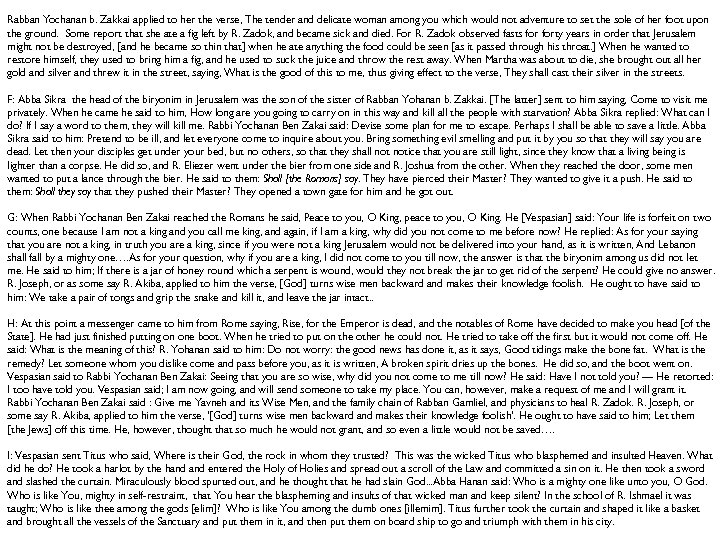 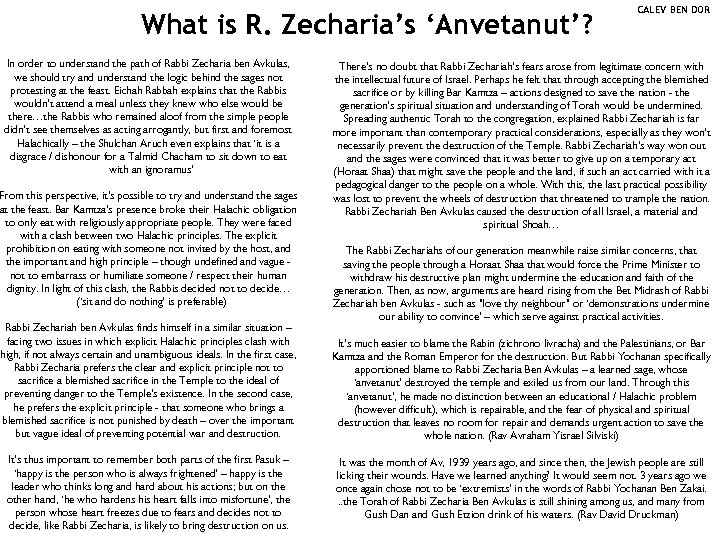 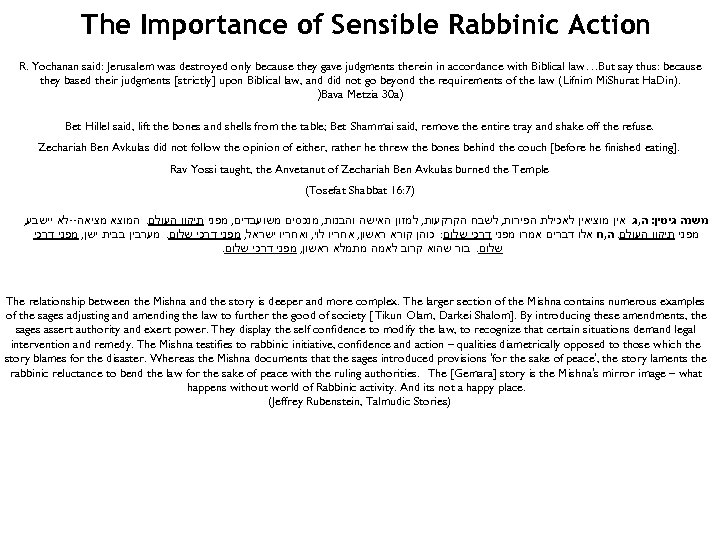 CALEV BEN DOR The ‘Anvetanut’ of Zecharia Ben Avkulas & The Destruction of the Temple A: R. Yochanan said: What is illustrative of the verse, Happy is the man that always fears, but he that hardens his heart shall fall into misfortune. The destruction of Jerusalem came through a Kamtza and a Bar Kamtza… A certain man had a friend Kamtza and an enemy Bar Kamtza. He once made a party and said to his servant, Go and bring Kamtza. The man went and brought Bar Kamtza. When the man [who gave the party] found him there he said, Since you are my enemy what are you doing here? Get out. Bar Kamtza said: Since I am here, let me stay, and I will pay you for whatever I eat and drink. The host refused. ‘Then let me give you half the cost of the party’. No, said the host. ‘Then let me pay for the whole party. ’ The host still refused and threw Bar Kamtza out of the party. B: Bar Kamtza reasoned, since the Rabbis were sitting there and did not stop him, they clearly agreed with him. I will go and inform against them to the Roman Government. He went and said to the Emperor, The Jews are rebelling against you. How can I tell? The Emperor asked. Bar Kamtza said to him: Send them an offering and see whether they will offer it [on the altar]. So the Emperor sent Bar Kamtza with him a fine calf. While on the way he made a blemish on its upper lip, or as some say on the white of its eye, in a place where Jews count it a blemish but [the Romans] do not. The Rabbis were inclined to offer it in order not to offend the Government. Said R. Zechariah b. Avkulas: People will say that blemished animals are offered on the altar. They then proposed to kill Bar Kamtza so that he should not go and inform against them, but R. Zechariah b. Avkulas said, Is one who makes a blemish on consecrated animals to be put to death? R. Yochanan thereupon remarked: Through the Anvetanut of R. Zechariah b. Avkulas our House has been destroyed, our Temple burnt and we ourselves exiled from our land. C: He [the Emperor] sent Nero against them. As he was coming he shot an arrow towards the east, and it fell in Jerusalem. He then shot one towards the west, and it again fell in Jerusalem. He shot towards all four points of the compass, and each time it fell in Jerusalem. He said to a certain boy: Repeat to me [the last] verse of Scripture you have learnt. He said: And I will lay my vengeance upon Edom by the hand of my people Israel. He said: The Holy One, blessed be He, desires to lay waste to his House and to lay the blame on me. So he ran away and became a proselyte, and R. Meir was descended from him. D: He then sent Vespasian who came and besieged Jerusalem for three years. In Jerusalem were three men of great wealth, Nakdimon b. Gurion, Ben Kalba Shabua and Ben Zizith Hakeseth. Nakdimon b. Gurion was so called because the sun continued shining for his sake. Ben Kalba Shabua was so called because one would go into his house hungry as a dog [kelev] and come out full [savea]. Ben Zizith Hakeseth was so called because his fringes [zizith] used to trail on cushions [keseth]. Others say he derived the name from the fact that his seat [kise] was among those of the nobility of Rome…. These men were in a position to keep the city for twenty-one years. The biryoni (thugs/ zealots) were then in the city. The Rabbis said to them: Let us go out and make peace with them [the Romans]. They would not let them, but on the contrary said, Let us go out and fight them. The Rabbis said: You will not succeed. They then rose up and burnt the stores of wheat and barley so that a famine ensued. E: Martha the daughter of Boethius was one of the richest women in Jerusalem. She sent her servant out saying, Go and bring me some fine flour. By the time he went it was sold out. He came and told her, There is no fine flour, but there is white [flour]. Go and bring me some, she said. By the time he went he found the white flour sold out. He came and told her, There is no white flour but there is dark flour. Go and bring me some, she said. By the time he went it was sold out. He returned and said to her, There is no dark flour, but there is barley flour. Go and bring me some, she said. By the time he went this was also sold out. She had taken off her shoes, but said, I will go out and see if I can find anything to eat. Some dung stuck to her foot and she died.

What is R. Zecharia’s ‘Anvetanut’? In order to understand the path of Rabbi Zecharia ben Avkulas, we should try and understand the logic behind the sages not protesting at the feast. Eichah Rabbah explains that the Rabbis wouldn’t attend a meal unless they knew who else would be there…the Rabbis who remained aloof from the simple people didn’t see themselves as acting arrogantly, but first and foremost Halachically – the Shulchan Aruch even explains that ‘it is a disgrace / dishonour for a Talmid Chacham to sit down to eat with an ignoramus’ From this perspective, it’s possible to try and understand the sages at the feast. Bar Kamtza’s presence broke their Halachic obligation to only eat with religiously appropriate people. They were faced with a clash between two Halachic principles. The explicit prohibition on eating with someone not invited by the host, and the important and high principle – though undefined and vague not to embarrass or humiliate someone / respect their human dignity. In light of this clash, the Rabbis decided not to decide… (‘sit and do nothing’ is preferable) Rabbi Zechariah ben Avkulas finds himself in a similar situation – facing two issues in which explicit Halachic principles clash with high, if not always certain and unambiguous ideals. In the first case, Rabbi Zecharia prefers the clear and explicit principle not to sacrifice a blemished sacrifice in the Temple to the ideal of preventing danger to the Temple’s existence. In the second case, he prefers the explicit principle - that someone who brings a blemished sacrifice is not punished by death – over the important but vague ideal of preventing potential war and destruction. It’s thus important to remember both parts of the first Pasuk – ‘happy is the person who is always frightened’ – happy is the leader who thinks long and hard about his actions; but on the other hand, ‘he who hardens his heart falls into misfortune', the person whose heart freezes due to fears and decides not to decide, like Rabbi Zecharia, is likely to bring destruction on us. CALEV BEN DOR There’s no doubt that Rabbi Zechariah’s fears arose from legitimate concern with the intellectual future of Israel. Perhaps he felt that through accepting the blemished sacrifice or by killing Bar Kamtza – actions designed to save the nation - the generation’s spiritual situation and understanding of Torah would be undermined. Spreading authentic Torah to the congregation, explained Rabbi Zechariah is far more important than contemporary practical considerations, especially as they won’t necessarily prevent the destruction of the Temple. Rabbi Zechariah’s way won out and the sages were convinced that it was better to give up on a temporary act (Horaat Shaa) that might save the people and the land, if such an act carried with it a pedagogical danger to the people on a whole. With this, the last practical possibility was lost to prevent the wheels of destruction that threatened to trample the nation. Rabbi Zechariah Ben Avkulas caused the destruction of all Israel, a material and spiritual Shoah… The Rabbi Zechariahs of our generation meanwhile raise similar concerns, that saving the people through a Horaat Shaa that would force the Prime Minister to withdraw his destructive plan might undermine the education and faith of the generation. Then, as now, arguments are heard rising from the Bet Midrash of Rabbi Zechariah ben Avkulas - such as "love thy neighbour" or ‘demonstrations undermine our ability to convince’ – which serve against practical activities. It’s much easier to blame the Rabin (zichrono livracha) and the Palestinians, or Bar Kamtza and the Roman Emperor for the destruction. But Rabbi Yochanan specifically apportioned blame to Rabbi Zecharia Ben Avkulas – a learned sage, whose ‘anvetanut’ destroyed the temple and exiled us from our land. Through this ‘anvetanut’, he made no distinction between an educational / Halachic problem (however difficult), which is repairable, and the fear of physical and spiritual destruction that leaves no room for repair and demands urgent action to save the whole nation. (Rav Avraham Yisrael Silviski) It was the month of Av, 1939 years ago, and since then, the Jewish people are still licking their wounds. Have we learned anything? It would seem not. 3 years ago we once again chose not to be ‘extremists’ in the words of Rabbi Yochanan Ben Zakai. . . the Torah of Rabbi Zecharia Ben Avkulas is still shining among us, and many from Gush Dan and Gush Etzion drink of his waters. (Rav David Druckman)

The Importance of Sensible Rabbinic Action R. Yochanan said: Jerusalem was destroyed only because they gave judgments therein in accordance with Biblical law…But say thus: because they based their judgments [strictly] upon Biblical law, and did not go beyond the requirements of the law (Lifnim Mi. Shurat Ha. Din). )Bava Metzia 30 a) Bet Hillel said, lift the bones and shells from the table; Bet Shammai said, remove the entire tray and shake off the refuse. Zechariah Ben Avkulas did not follow the opinion of either, rather he threw the bones behind the couch [before he finished eating]. Rav Yossi taught, the Anvetanut of Zechariah Ben Avkulas burned the Temple (Tosefat Shabbat 16: 7) , משנה גיטין: ה, ג אין מוציאין לאכילת הפירות, לשבח הקרקעות, למזון האישה והבנות, מנכסים משועבדים, מפני תיקון העולם. המוצא מציאה--לא יישבע מפני תיקון העולם. ה, ח אלו דברים אמרו מפני דרכי שלום: כוהן קורא ראשון, אחריו לוי, ואחריו ישראל, מפני דרכי שלום. מערבין בבית ישן, מפני דרכי . שלום. בור שהוא קרוב לאמה מתמלא ראשון, מפני דרכי שלום The relationship between the Mishna and the story is deeper and more complex. The larger section of the Mishna contains numerous examples of the sages adjusting and amending the law to further the good of society [ Tikun Olam, Darkei Shalom]. By introducing these amendments, the sages assert authority and exert power. They display the self confidence to modify the law, to recognize that certain situations demand legal intervention and remedy. The Mishna testifies to rabbinic initiative, confidence and action – qualities diametrically opposed to those which the story blames for the disaster. Whereas the Mishna documents that the sages introduced provisions 'for the sake of peace', the story laments the rabbinic reluctance to bend the law for the sake of peace with the ruling authorities. The [Gemara] story is the Mishna's mirror image – what happens without world of Rabbinic activity. And its not a happy place. (Jeffrey Rubenstein, Talmudic Stories)