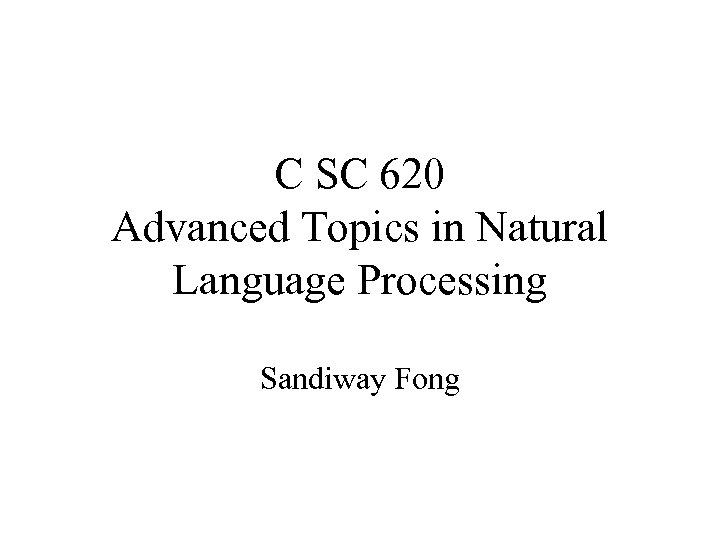 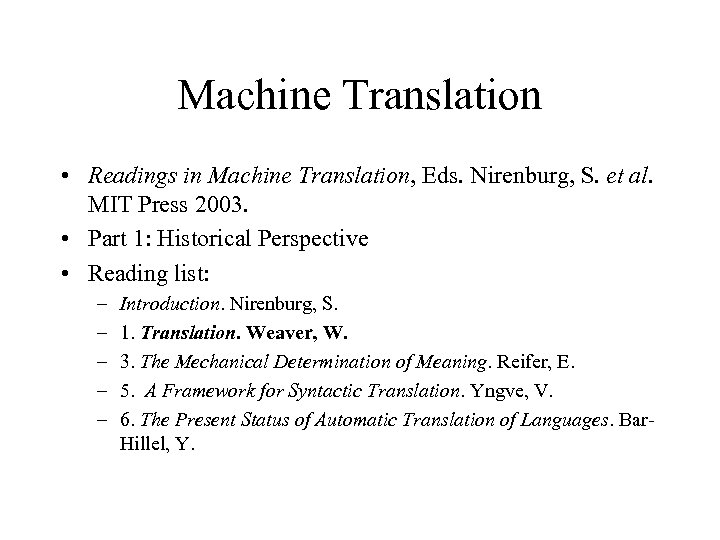 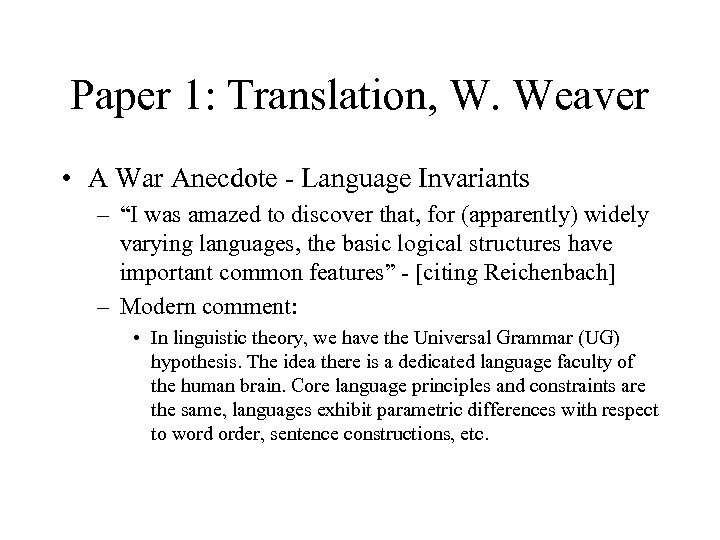 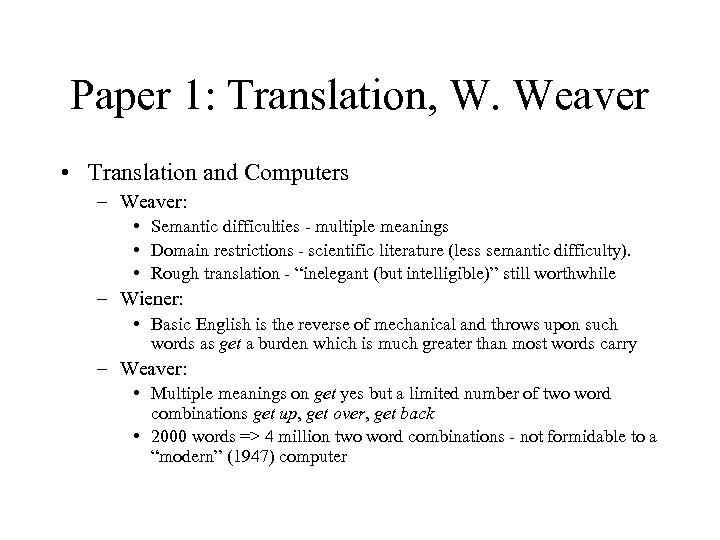 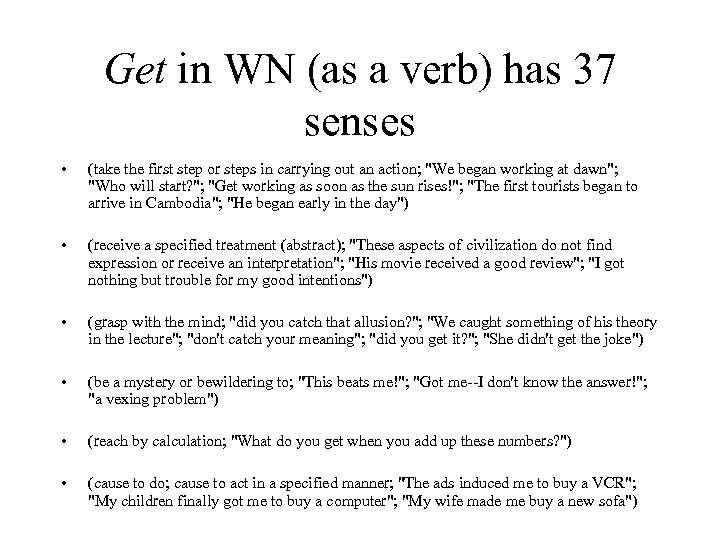 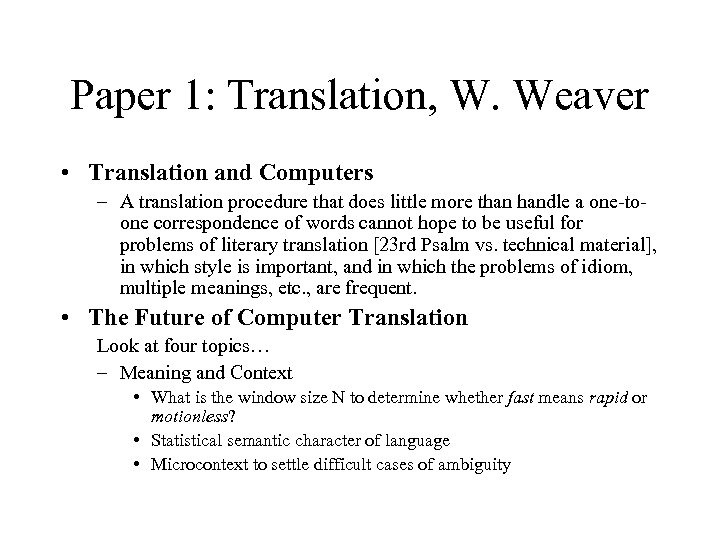 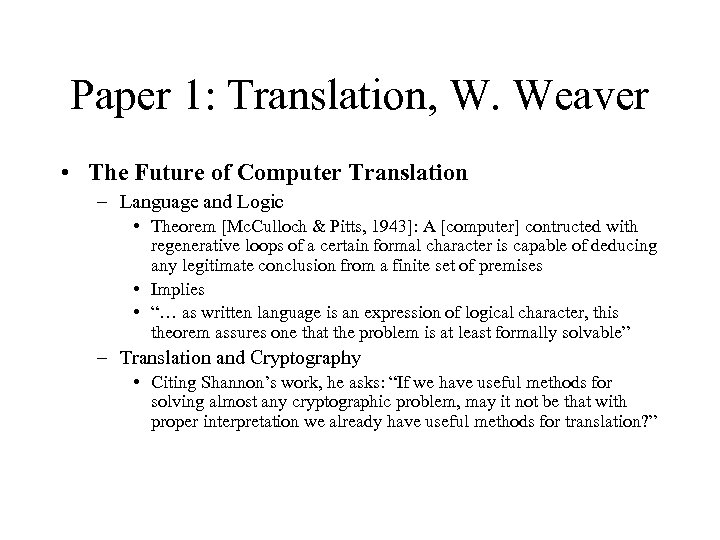 Paper 1: Translation, W. Weaver • A War Anecdote - Language Invariants – “I was amazed to discover that, for (apparently) widely varying languages, the basic logical structures have important common features” - [citing Reichenbach] – Modern comment: • In linguistic theory, we have the Universal Grammar (UG) hypothesis. The idea there is a dedicated language faculty of the human brain. Core language principles and constraints are the same, languages exhibit parametric differences with respect to word order, sentence constructions, etc.

Paper 1: Translation, W. Weaver • Translation and Computers – Weaver: • Semantic difficulties - multiple meanings • Domain restrictions - scientific literature (less semantic difficulty). • Rough translation - “inelegant (but intelligible)” still worthwhile – Wiener: • Basic English is the reverse of mechanical and throws upon such words as get a burden which is much greater than most words carry – Weaver: • Multiple meanings on get yes but a limited number of two word combinations get up, get over, get back • 2000 words => 4 million two word combinations - not formidable to a “modern” (1947) computer

• (make children; "Abraham begot Isaac"; "Men often father children but don't recognize them") • (undergo (as of injuries and illnesses); "She suffered a fracture in the accident"; "He had an insulin shock after eating three candy bars"; "She got a bruise on her leg"; "He got his arm broken in the scuffle") • (be stricken by an illness, fall victim to an illness; "He got AIDS"; "She came down with

Get in WN (as a verb) has 37 senses • (take the first step or steps in carrying out an action; "We began working at dawn"; "Who will start? "; "Get working as soon as the sun rises!"; "The first tourists began to arrive in Cambodia"; "He began early in the day") • (receive a specified treatment (abstract); "These aspects of civilization do not find expression or receive an interpretation"; "His movie received a good review"; "I got nothing but trouble for my good intentions") • (grasp with the mind; "did you catch that allusion? "; "We caught something of his theory in the lecture"; "don't catch your meaning"; "did you get it? "; "She didn't get the joke") • (be a mystery or bewildering to; "This beats me!"; "Got me--I don't know the answer!"; "a vexing problem") • (reach by calculation; "What do you get when you add up these numbers? ") • (cause to do; cause to act in a specified manner; "The ads induced me to buy a VCR"; "My children finally got me to buy a computer"; "My wife made me buy a new sofa")

Paper 1: Translation, W. Weaver • Translation and Computers – A translation procedure that does little more than handle a one-toone correspondence of words cannot hope to be useful for problems of literary translation [23 rd Psalm vs. technical material], in which style is important, and in which the problems of idiom, multiple meanings, etc. , are frequent. • The Future of Computer Translation Look at four topics… – Meaning and Context • What is the window size N to determine whether fast means rapid or motionless? • Statistical semantic character of language • Microcontext to settle difficult cases of ambiguity

Paper 1: Translation, W. Weaver • The Future of Computer Translation – Language and Logic • Theorem [Mc. Culloch & Pitts, 1943]: A [computer] contructed with regenerative loops of a certain formal character is capable of deducing any legitimate conclusion from a finite set of premises • Implies • “… as written language is an expression of logical character, this theorem assures one that the problem is at least formally solvable” – Translation and Cryptography • Citing Shannon’s work, he asks: “If we have useful methods for solving almost any cryptographic problem, may it not be that with proper interpretation we already have useful methods for translation? ”

Paper 1: Translation, W. Weaver • The Future of Computer Translation – Language and Invariants • Most promising approach … • “Thus may it be true that the way to translate from Chinese to Arabic, or from Russian to Portuguese, is not to attempt the direct route, shouting from tower to tower. Perhaps the way is to descend, from each language, down to the common base of human communication the real but as yet undiscovered universal language - and then reemerge by whatever particular route is convenient. ” • Modern comment: – Interlingua or proto-language?