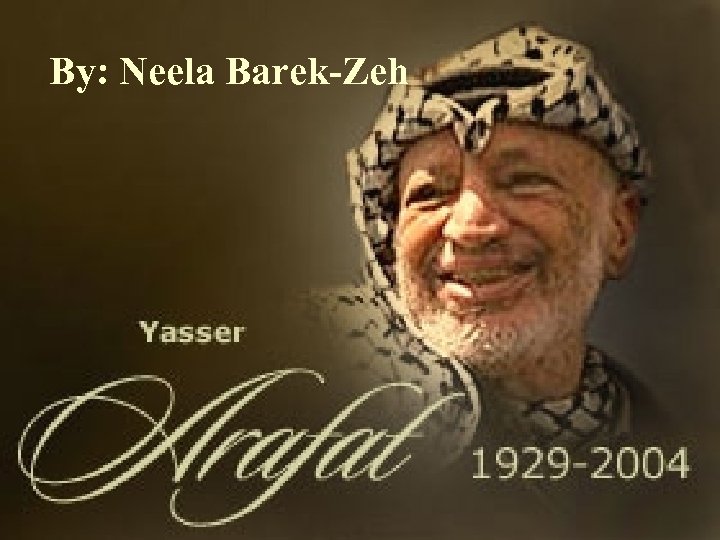 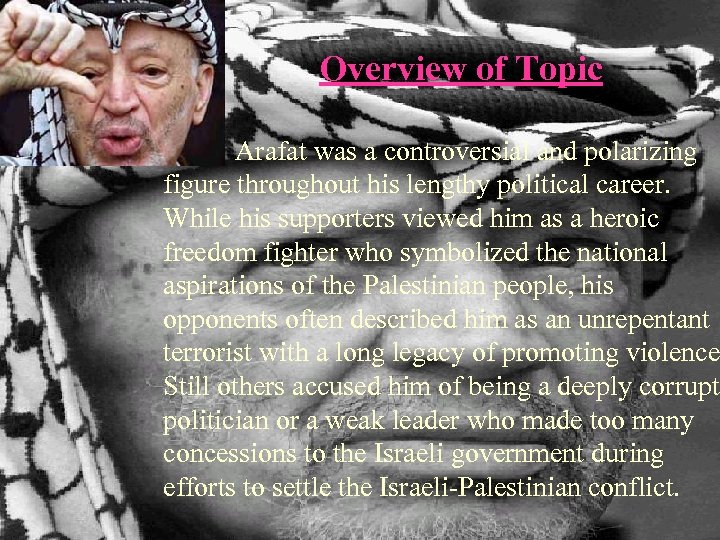 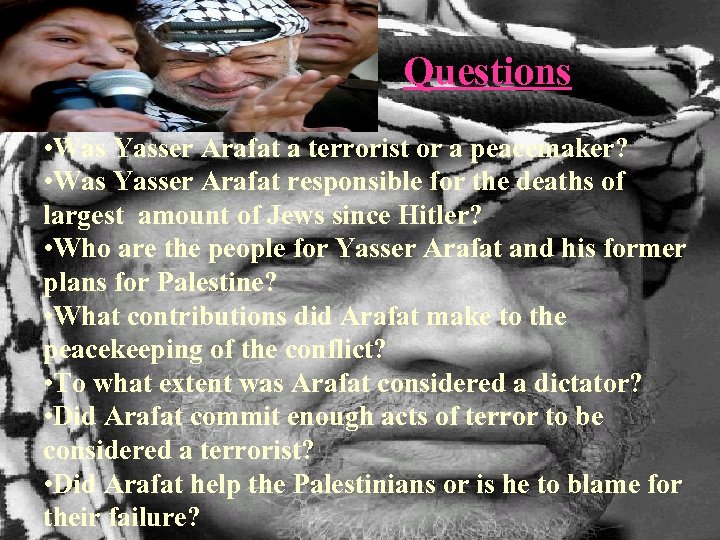 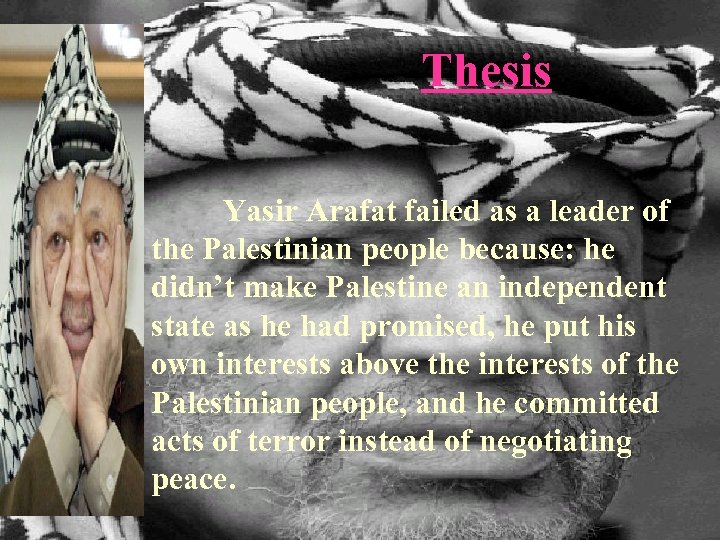 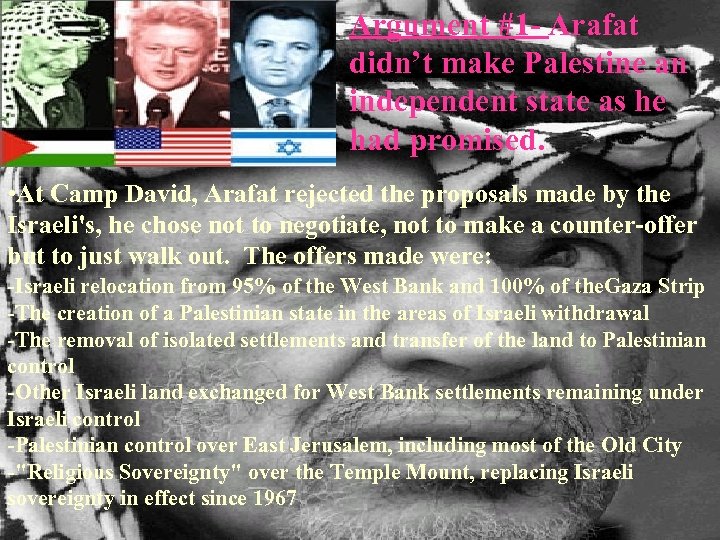 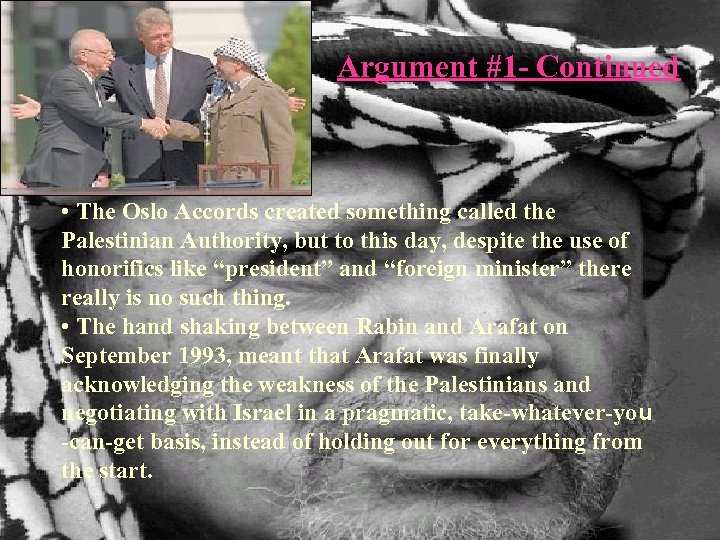 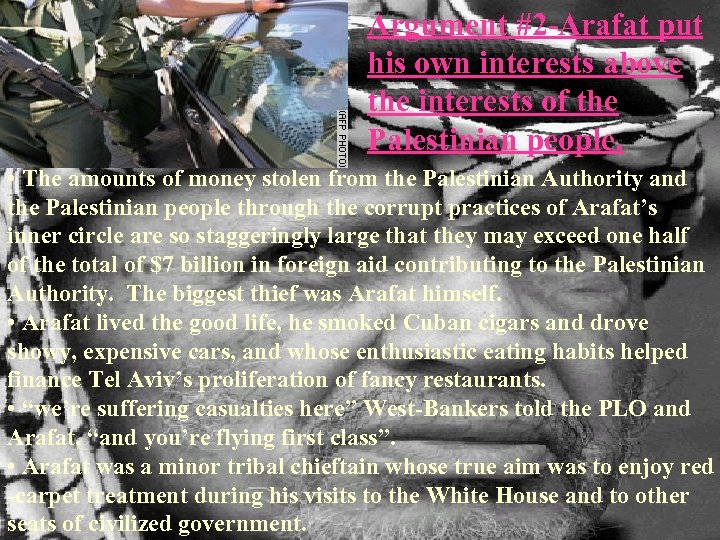 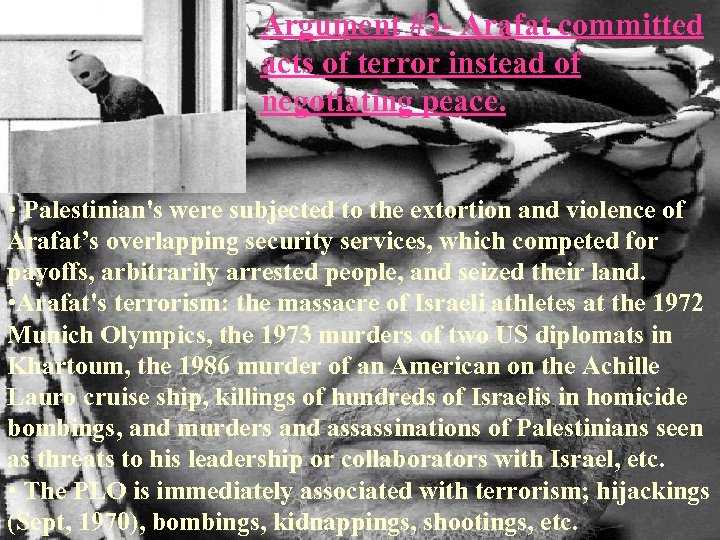 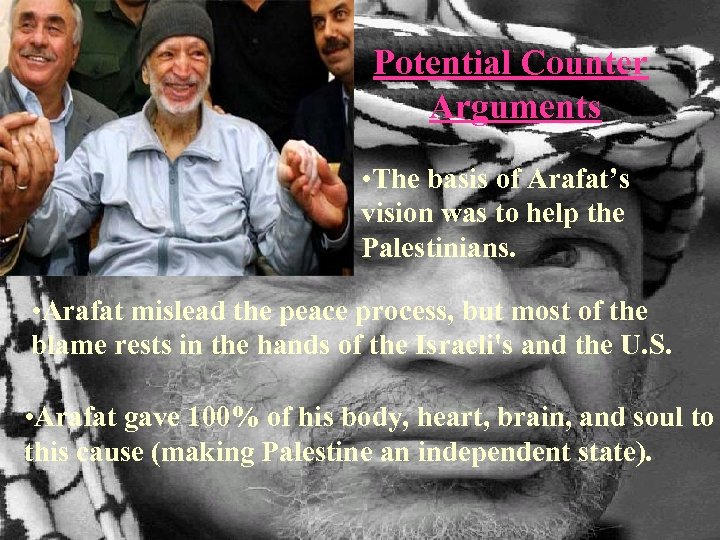 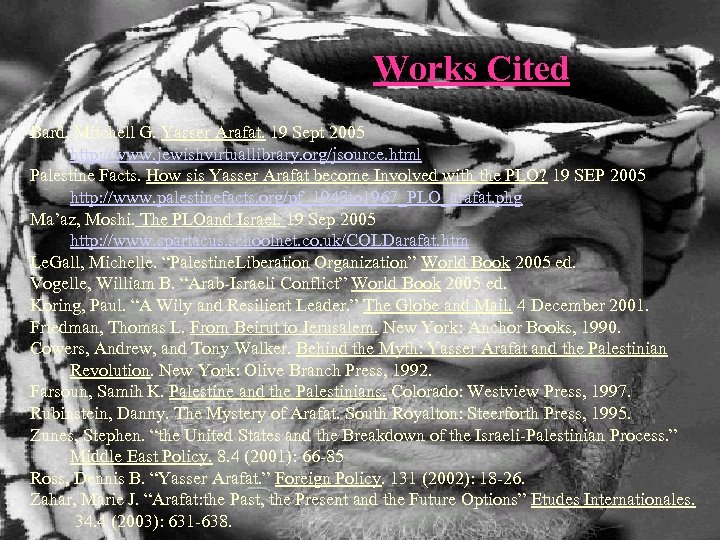 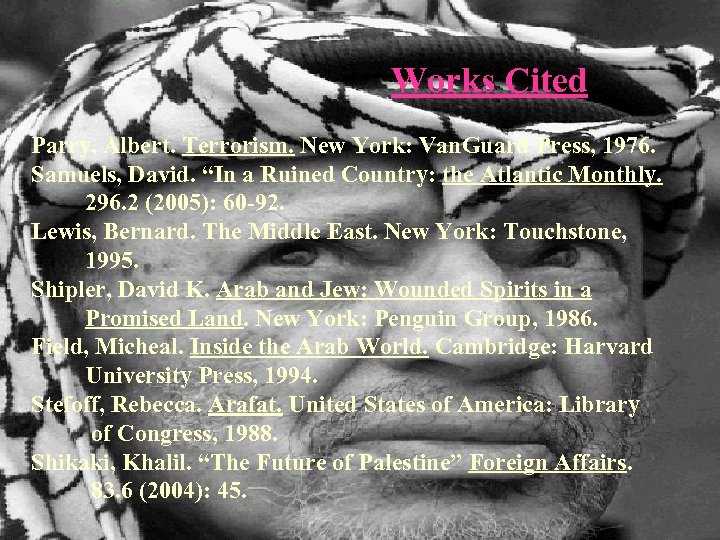 Overview of Topic Arafat was a controversial and polarizing figure throughout his lengthy political career. While his supporters viewed him as a heroic freedom fighter who symbolized the national aspirations of the Palestinian people, his opponents often described him as an unrepentant terrorist with a long legacy of promoting violence Still others accused him of being a deeply corrupt politician or a weak leader who made too many concessions to the Israeli government during efforts to settle the Israeli-Palestinian conflict.

Argument #1 - Arafat didn’t make Palestine an independent state as he had promised. • At Camp David, Arafat rejected the proposals made by the Israeli's, he chose not to negotiate, not to make a counter-offer but to just walk out. The offers made were: -Israeli relocation from 95% of the West Bank and 100% of the. Gaza Strip -The creation of a Palestinian state in the areas of Israeli withdrawal -The removal of isolated settlements and transfer of the land to Palestinian control -Other Israeli land exchanged for West Bank settlements remaining under Israeli control -Palestinian control over East Jerusalem, including most of the Old City -"Religious Sovereignty" over the Temple Mount, replacing Israeli sovereignty in effect since 1967

Argument #1 - Continued • The Oslo Accords created something called the Palestinian Authority, but to this day, despite the use of honorifics like “president” and “foreign minister” there really is no such thing. • The hand shaking between Rabin and Arafat on September 1993, meant that Arafat was finally acknowledging the weakness of the Palestinians and negotiating with Israel in a pragmatic, take-whatever-you -can-get basis, instead of holding out for everything from the start.

Argument #2 -Arafat put his own interests above the interests of the Palestinian people. • The amounts of money stolen from the Palestinian Authority and the Palestinian people through the corrupt practices of Arafat’s inner circle are so staggeringly large that they may exceed one half of the total of $7 billion in foreign aid contributing to the Palestinian Authority. The biggest thief was Arafat himself. • Arafat lived the good life, he smoked Cuban cigars and drove showy, expensive cars, and whose enthusiastic eating habits helped finance Tel Aviv’s proliferation of fancy restaurants. • “we’re suffering casualties here” West-Bankers told the PLO and Arafat, “and you’re flying first class”. • Arafat was a minor tribal chieftain whose true aim was to enjoy red -carpet treatment during his visits to the White House and to other seats of civilized government.

Argument #3 - Arafat committed acts of terror instead of negotiating peace. • Palestinian's were subjected to the extortion and violence of Arafat’s overlapping security services, which competed for payoffs, arbitrarily arrested people, and seized their land. • Arafat's terrorism: the massacre of Israeli athletes at the 1972 Munich Olympics, the 1973 murders of two US diplomats in Khartoum, the 1986 murder of an American on the Achille Lauro cruise ship, killings of hundreds of Israelis in homicide bombings, and murders and assassinations of Palestinians seen as threats to his leadership or collaborators with Israel, etc. • The PLO is immediately associated with terrorism; hijackings (Sept, 1970), bombings, kidnappings, shootings, etc.

Potential Counter Arguments • The basis of Arafat’s vision was to help the Palestinians. • Arafat mislead the peace process, but most of the blame rests in the hands of the Israeli's and the U. S. • Arafat gave 100% of his body, heart, brain, and soul to this cause (making Palestine an independent state).

Topic Sentence • Before writing any essay

STRUCTURING PARAGRAPHS AND SENTENCES THE AIMS ARE