by Arthur Miller Death of a Salesman 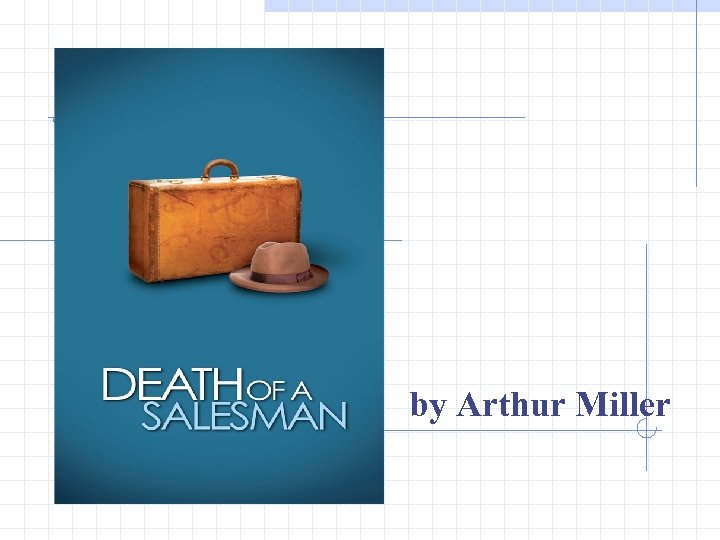 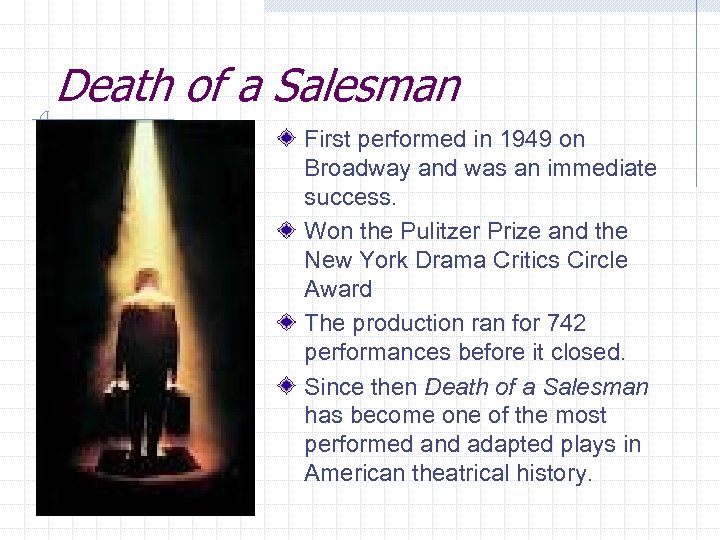 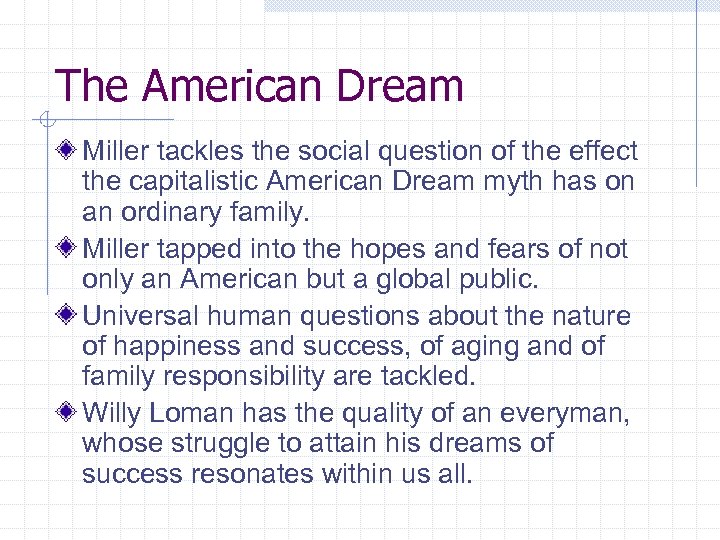 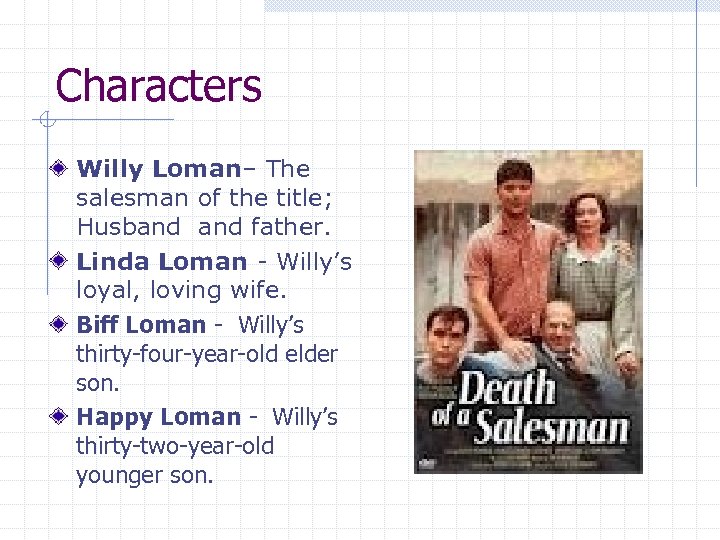 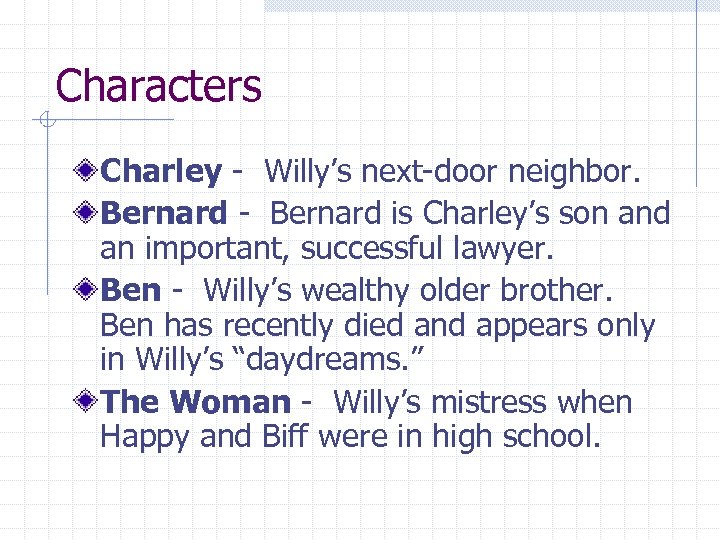 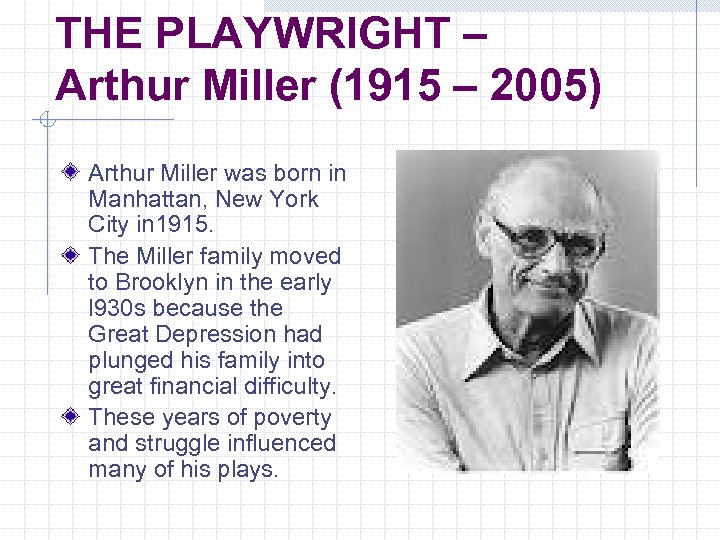 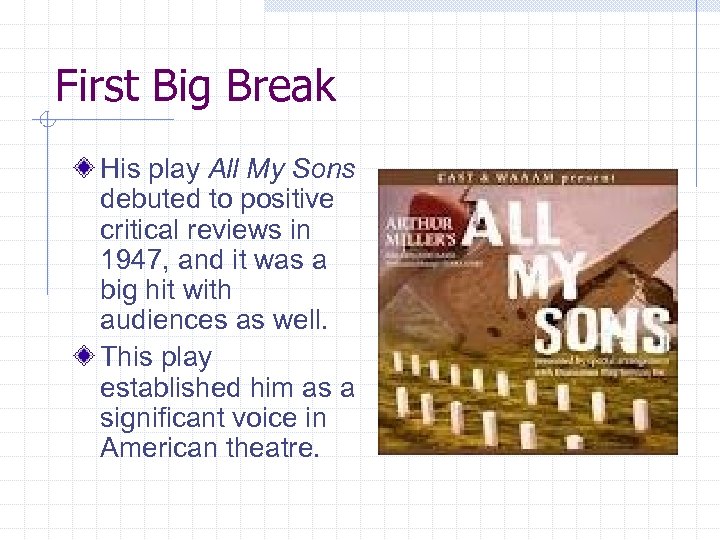 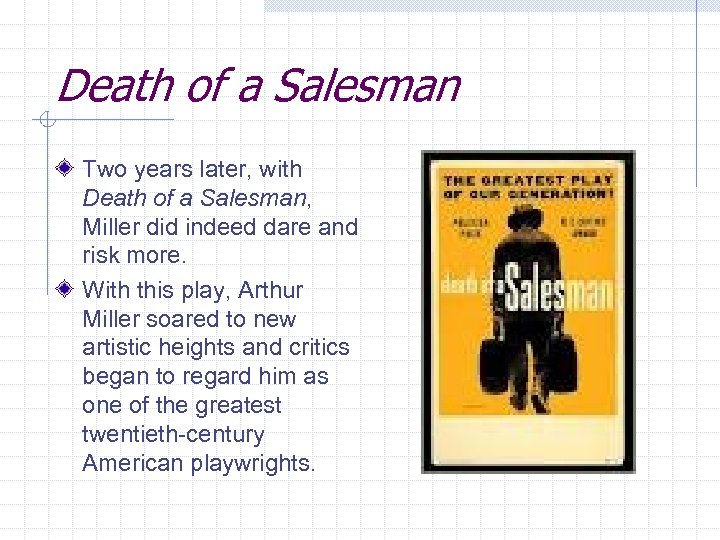 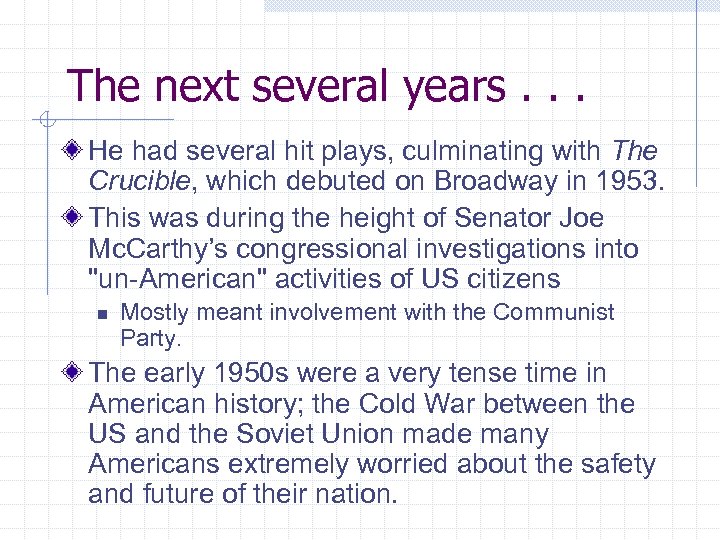 Скачать презентацию by Arthur Miller Death of a Salesman

Death of a Salesman First performed in 1949 on Broadway and was an immediate success. Won the Pulitzer Prize and the New York Drama Critics Circle Award The production ran for 742 performances before it closed. Since then Death of a Salesman has become one of the most performed and adapted plays in American theatrical history.

The American Dream Miller tackles the social question of the effect the capitalistic American Dream myth has on an ordinary family. Miller tapped into the hopes and fears of not only an American but a global public. Universal human questions about the nature of happiness and success, of aging and of family responsibility are tackled. Willy Loman has the quality of an everyman, whose struggle to attain his dreams of success resonates within us all.

Craft It is not just themes of the play that ensured its success. Miller was so innovative with form and skilled with language that he created a style that was accessible to any audience yet He produced a multi-layered piece of theatre.

THE PLAYWRIGHT – Arthur Miller (1915 – 2005) Arthur Miller was born in Manhattan, New York City in 1915. The Miller family moved to Brooklyn in the early l 930 s because the Great Depression had plunged his family into great financial difficulty. These years of poverty and struggle influenced many of his plays.

First Big Break His play All My Sons debuted to positive critical reviews in 1947, and it was a big hit with audiences as well. This play established him as a significant voice in American theatre.

Death of a Salesman Two years later, with Death of a Salesman, Miller did indeed dare and risk more. With this play, Arthur Miller soared to new artistic heights and critics began to regard him as one of the greatest twentieth-century American playwrights.

The next several years. . . He had several hit plays, culminating with The Crucible, which debuted on Broadway in 1953. This was during the height of Senator Joe Mc. Carthy’s congressional investigations into "un-American" activities of US citizens n Mostly meant involvement with the Communist Party. The early 1950 s were a very tense time in American history; the Cold War between the US and the Soviet Union made many Americans extremely worried about the safety and future of their nation.

Mc. Carthy Hearings Miller reflected the paranoia and hysteria of the time in The Crucible. Miller was called to testify before the House Un-American Activities Committee Asked to tell the committee members the names of US citizens who were involved in Communist activities. Miller refused, and was thus cited with contempt of Congress, a serious crime. This conviction, however, was overturned by the Supreme Court in 1958.

Arthur Miller on Willy Loman Willy is foolish and even ridiculous sometimes. He tells the most transparent lies, exaggerates mercilessly, and so on. But I really want you to see that his impulses are not foolish at all. He cannot bear reality, and since he can’t do much to change it, he keeps changing his ideas of it. n Arthur Miller, Salesman in Beijing, 1984