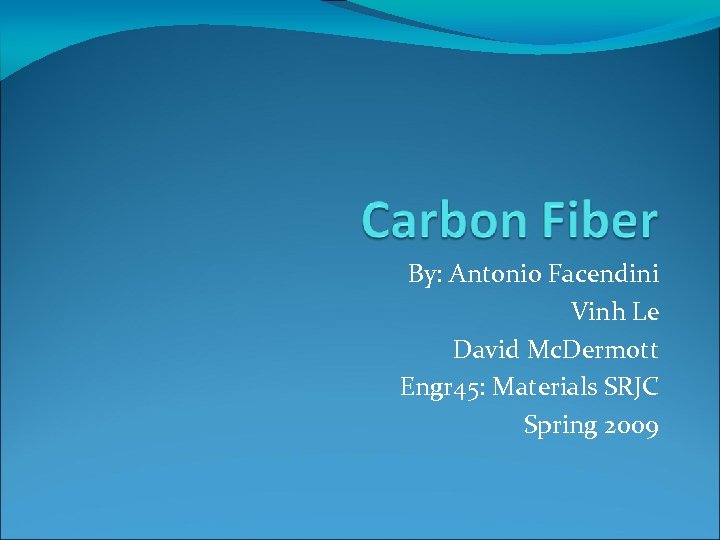 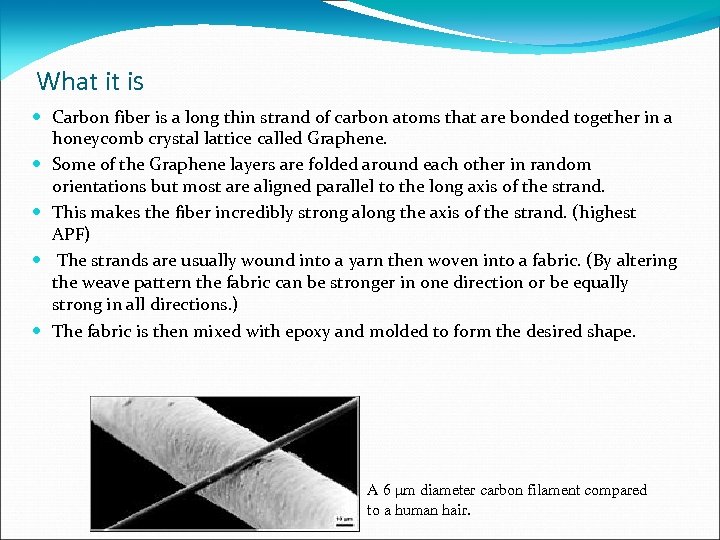 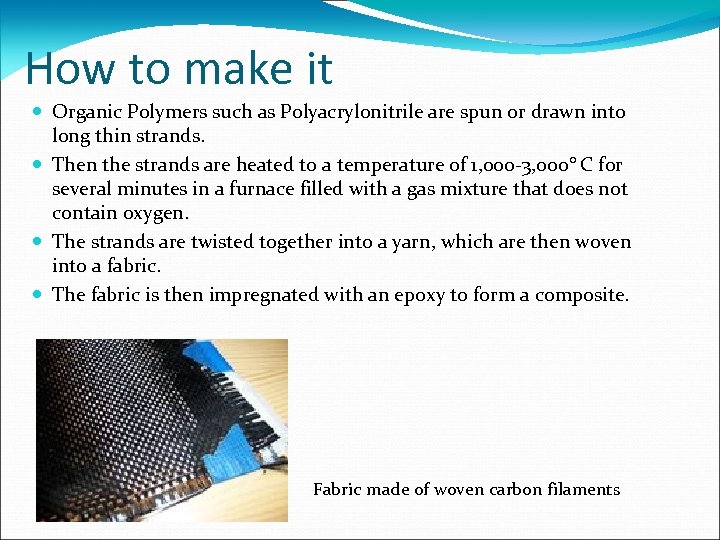 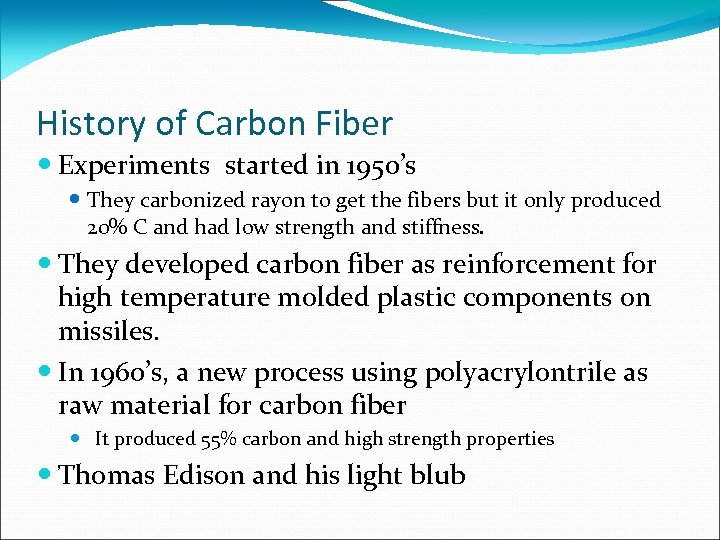 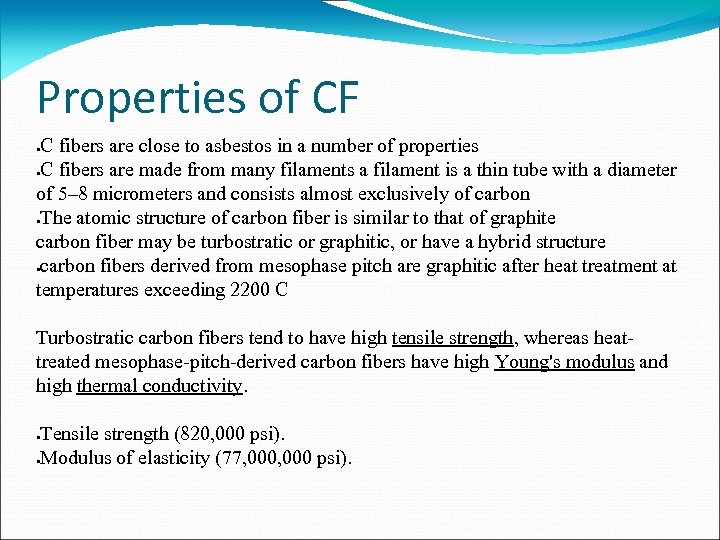 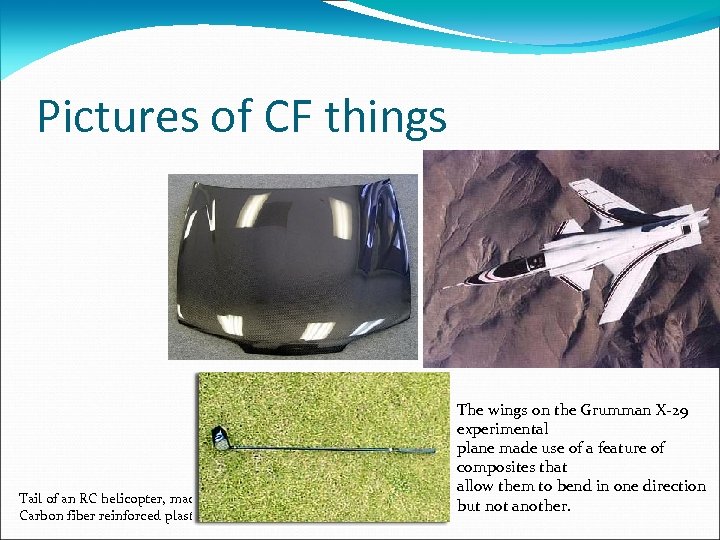 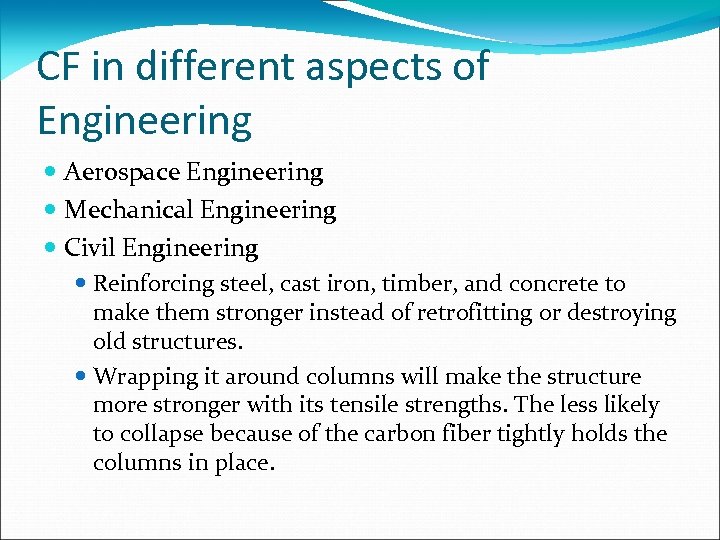 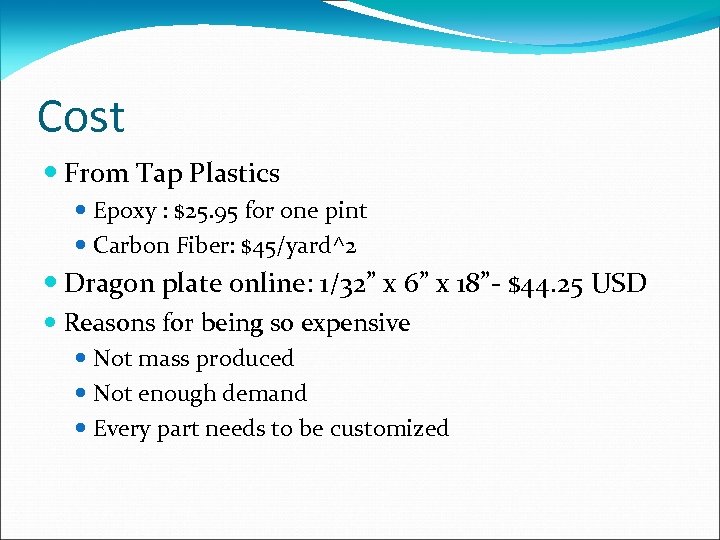 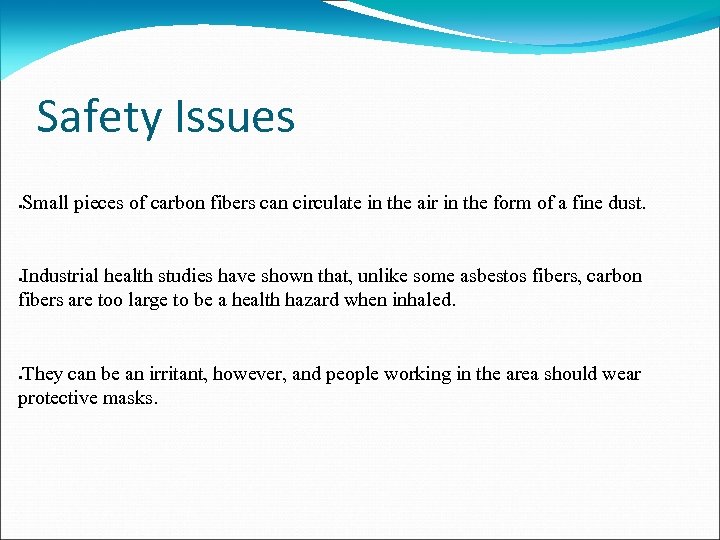 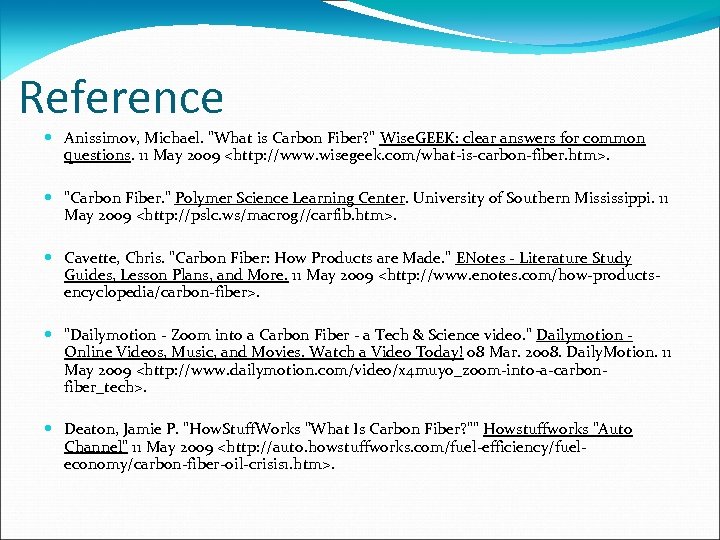 What it is Carbon fiber is a long thin strand of carbon atoms that are bonded together in a honeycomb crystal lattice called Graphene. Some of the Graphene layers are folded around each other in random orientations but most are aligned parallel to the long axis of the strand. This makes the fiber incredibly strong along the axis of the strand. (highest APF) The strands are usually wound into a yarn then woven into a fabric. (By altering the weave pattern the fabric can be stronger in one direction or be equally strong in all directions. ) The fabric is then mixed with epoxy and molded to form the desired shape. A 6 μm diameter carbon filament compared to a human hair.

How to make it Organic Polymers such as Polyacrylonitrile are spun or drawn into long thin strands. Then the strands are heated to a temperature of 1, 000 -3, 000° C for several minutes in a furnace filled with a gas mixture that does not contain oxygen. The strands are twisted together into a yarn, which are then woven into a fabric. The fabric is then impregnated with an epoxy to form a composite. Fabric made of woven carbon filaments

History of Carbon Fiber Experiments started in 1950’s They carbonized rayon to get the fibers but it only produced 20% C and had low strength and stiffness. They developed carbon fiber as reinforcement for high temperature molded plastic components on missiles. In 1960’s, a new process using polyacrylontrile as raw material for carbon fiber It produced 55% carbon and high strength properties Thomas Edison and his light blub

Properties of CF C fibers are close to asbestos in a number of properties C fibers are made from many filaments a filament is a thin tube with a diameter of 5– 8 micrometers and consists almost exclusively of carbon The atomic structure of carbon fiber is similar to that of graphite carbon fiber may be turbostratic or graphitic, or have a hybrid structure carbon fibers derived from mesophase pitch are graphitic after heat treatment at temperatures exceeding 2200 C Turbostratic carbon fibers tend to have high tensile strength, whereas heattreated mesophase-pitch-derived carbon fibers have high Young's modulus and high thermal conductivity. Tensile strength (820, 000 psi). Modulus of elasticity (77, 000 psi).

Pictures of CF things Tail of an RC helicopter, made of Carbon fiber reinforced plastic The wings on the Grumman X-29 experimental plane made use of a feature of composites that allow them to bend in one direction but not another.

CF in different aspects of Engineering Aerospace Engineering Mechanical Engineering Civil Engineering Reinforcing steel, cast iron, timber, and concrete to make them stronger instead of retrofitting or destroying old structures. Wrapping it around columns will make the structure more stronger with its tensile strengths. The less likely to collapse because of the carbon fiber tightly holds the columns in place.

Safety Issues Small pieces of carbon fibers can circulate in the air in the form of a fine dust. Industrial health studies have shown that, unlike some asbestos fibers, carbon fibers are too large to be a health hazard when inhaled. They can be an irritant, however, and people working in the area should wear protective masks.

Recycling Milled Carbon was established in 2003 and Based in the U. K. developed a system using pyrolysis, a method of incineration that chemically decomposes materials by heating them in a near oxygen-free atmosphere In Milled Carbon’s process, incineration burns off all the resin and additives, freeing the fiber reinforcement making it possible to recover materials in substantially the same condition the reclaimed carbon fibers are 99. 9 percent pure single fiber tests were conducted to compare virgin carbon-fiber fabric with reclaimed fibers. Results indicate average reduction in tensile strength of only 8. 6 percent