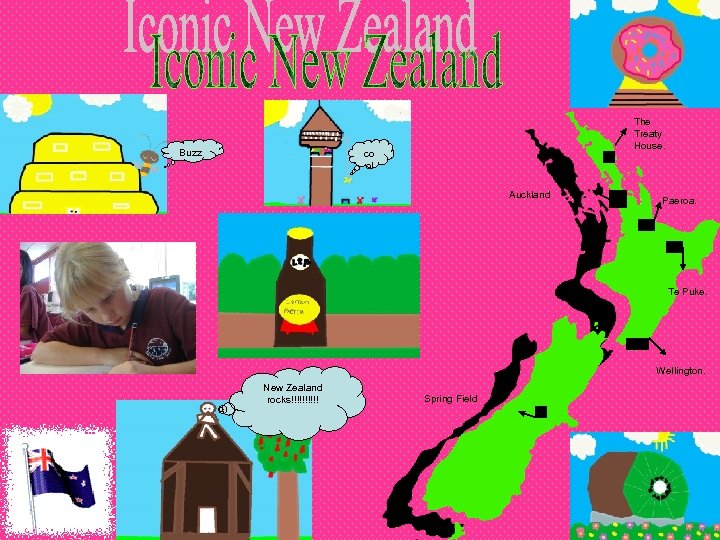 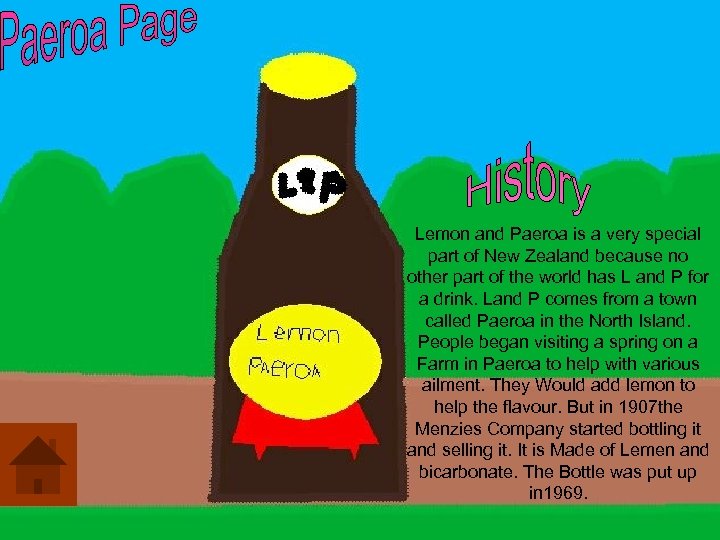 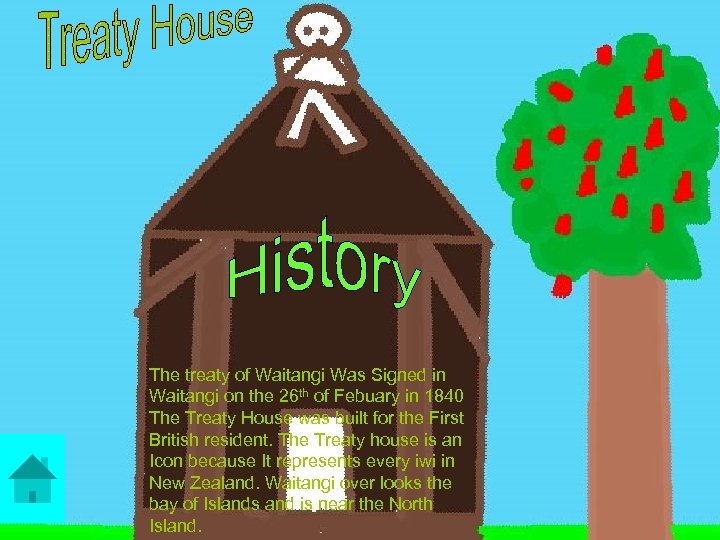 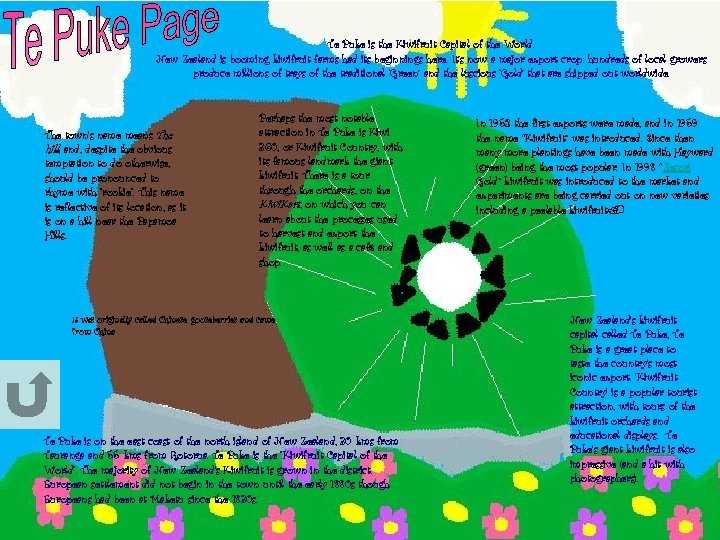 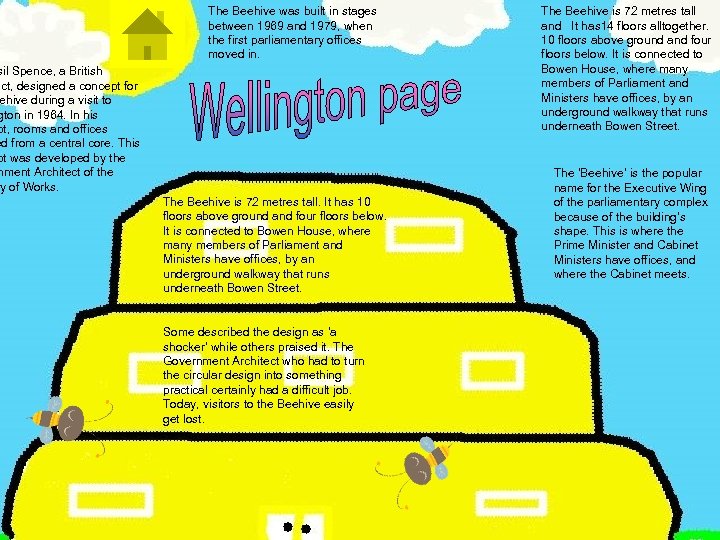 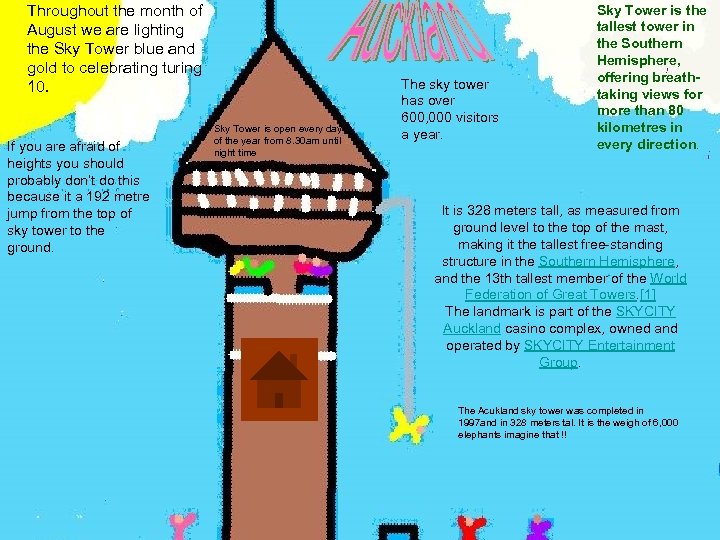 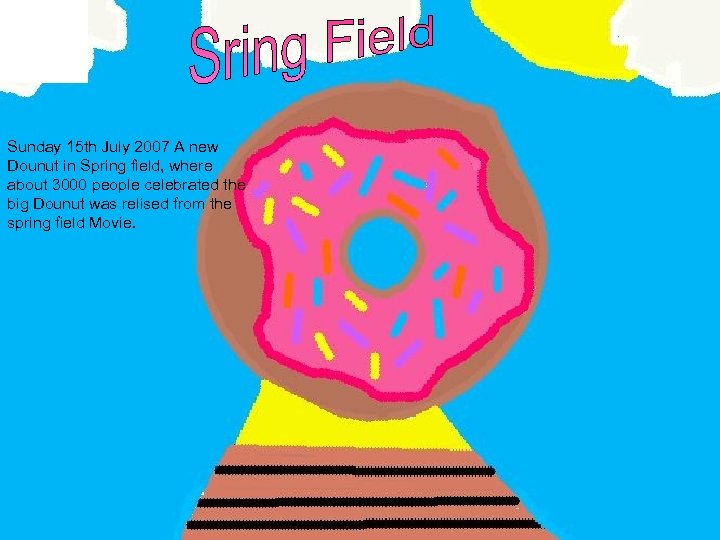 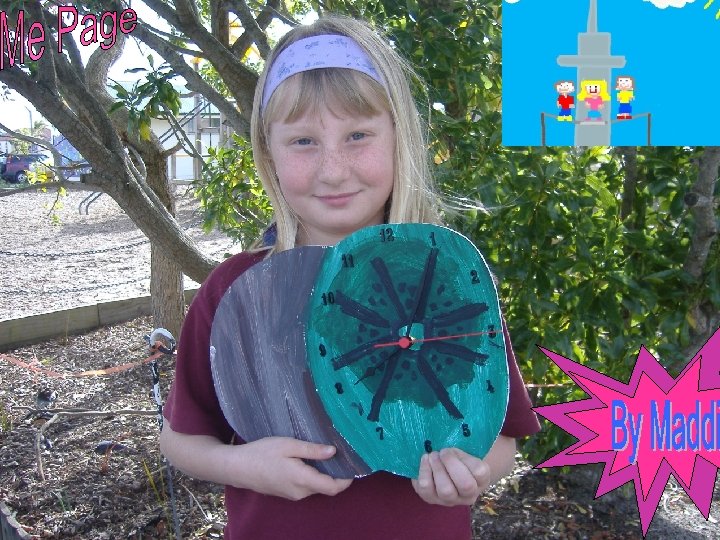 Lemon and Paeroa is a very special part of New Zealand because no other part of the world has L and P for a drink. Land P comes from a town called Paeroa in the North Island. People began visiting a spring on a Farm in Paeroa to help with various ailment. They Would add lemon to help the flavour. But in 1907 the Menzies Company started bottling it and selling it. It is Made of Lemen and bicarbonate. The Bottle was put up in 1969.

The treaty of Waitangi Was Signed in Waitangi on the 26 th of Febuary in 1840 The Treaty House was built for the First British resident. The Treaty house is an Icon because It represents every iwi in New Zealand. Waitangi over looks the bay of Islands and is near the North Island.

Te Puke is the Kiwifruit Capital of the World. New Zealand is booming kiwifruit farms had its beginnings here. It’s now a major export crop: hundreds of local growers produce millions of trays of the traditional ‘Green’ and the luscious ‘Gold’ that are shipped out worldwide. The town's name means The hill, and, despite the obvious temptation to do otherwise, should be pronounced to rhyme with "rookie". This name is reflective of its location, as it is on a hill near the Papamoa Hills. Perhaps the most notable attraction in Te Puke is Kiwi 360, or Kiwifruit Country, with its famous landmark the giant kiwifruit. There is a tour through the orchards, on the Kiwi. Kart, on which you can learn about the processes used to harvest and export the kiwifruit, as well as a café and shop. It was originally called Chinese gooseberries and came from China Te Puke is on the east coast of the north island of New Zealand, 30 kms from Tauranga and 55 kms from Rotorua. Te Puke is the "Kiwifruit Capital of the World". The majority of New Zealand's Kiwifruit is grown in the district. European settlement did not begin in the town until the early 1880 s though Europeans had been at Maketu since the 1830 s. In 1952 the first exports were made, and in 1959 the name “Kiwifruit” was introduced. Since then many more plantings have been made with Hayward (green) being the most popular. In 1998 “Zespri Gold” kiwifruit was introduced to the market and experiments are being carried out on new varieties including a peelable kiwifruit. New Zealand's kiwifruit capital called Te Puke, Te Puke is a great place to taste the country's most iconic export. 'Kiwifruit Country' is a popular tourist attraction, with tours of the kiwifruit orchards and educational displays. Te Puke's giant kiwifruit is also impressive (and a hit with photographers).

Throughout the month of August we are lighting the Sky Tower blue and gold to celebrating turing 10. If you are afraid of heights you should probably don’t do this because it a 192 metre jump from the top of sky tower to the ground. Sky Tower is open every day of the year from 8. 30 am until night time The sky tower has over 600, 000 visitors a year. Sky Tower is the tallest tower in the Southern Hemisphere, offering breathtaking views for more than 80 kilometres in every direction. It is 328 meters tall, as measured from ground level to the top of the mast, making it the tallest free-standing structure in the Southern Hemisphere, and the 13 th tallest member of the World Federation of Great Towers. [1] The landmark is part of the SKYCITY Auckland casino complex, owned and operated by SKYCITY Entertainment Group. The Acukland sky tower was completed in 1997 and in 328 meters tal. It is the weigh of 6, 000 elephants imagine that !!

Sunday 15 th July 2007 A new Dounut in Spring field, where about 3000 people celebrated the big Dounut was relised from the spring field Movie.

— What is the capital of New Zealand?