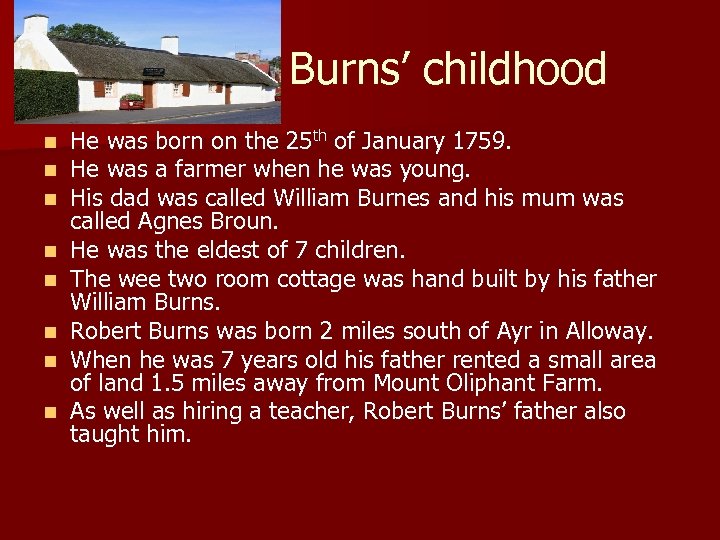 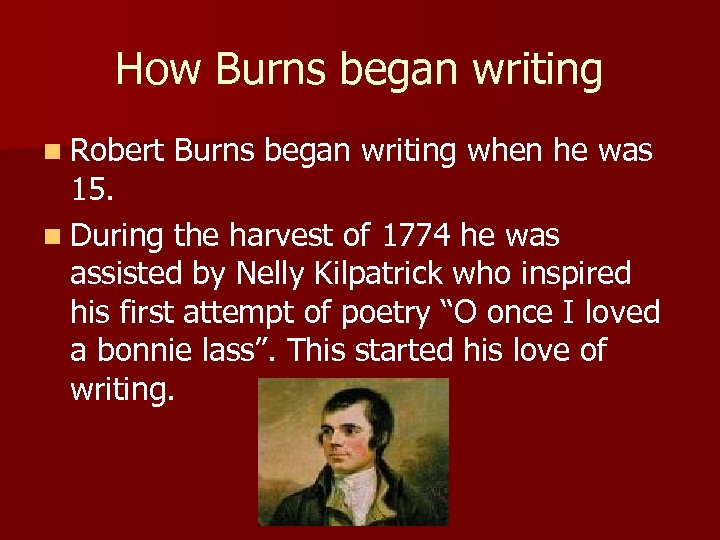 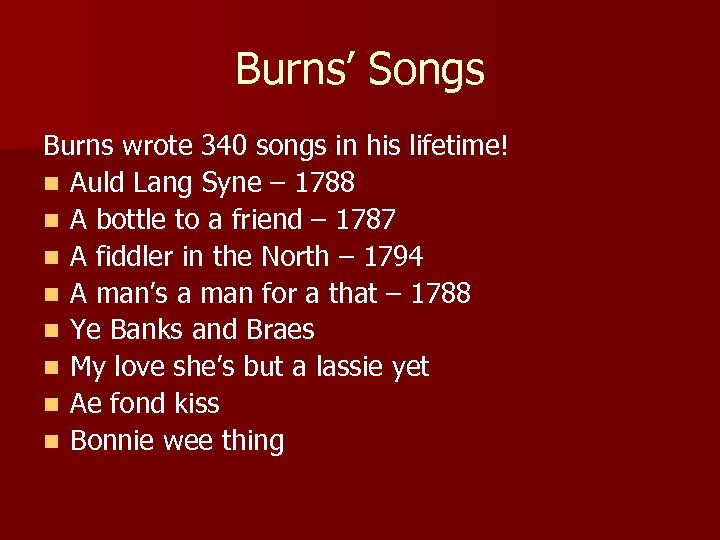 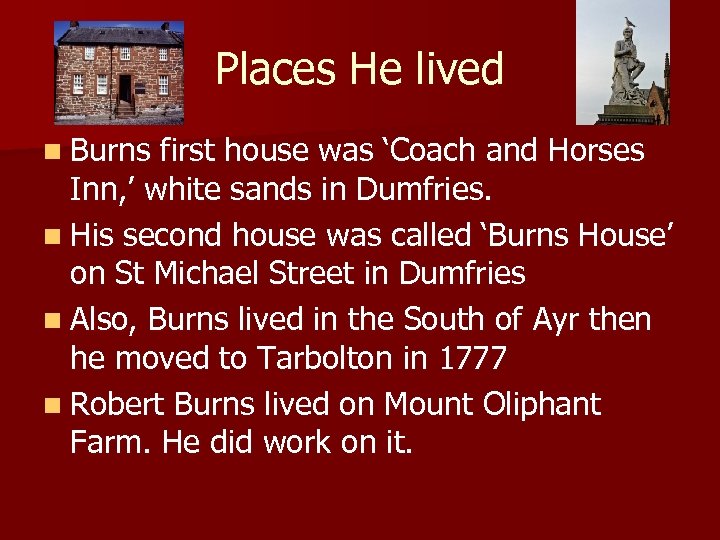 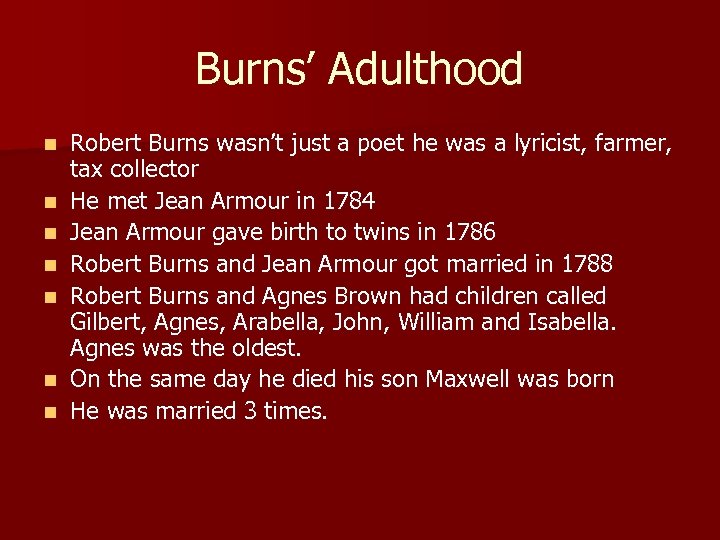 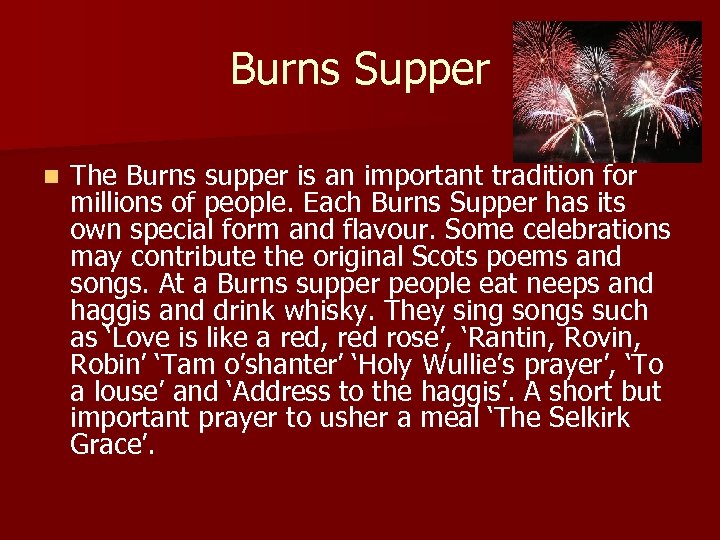 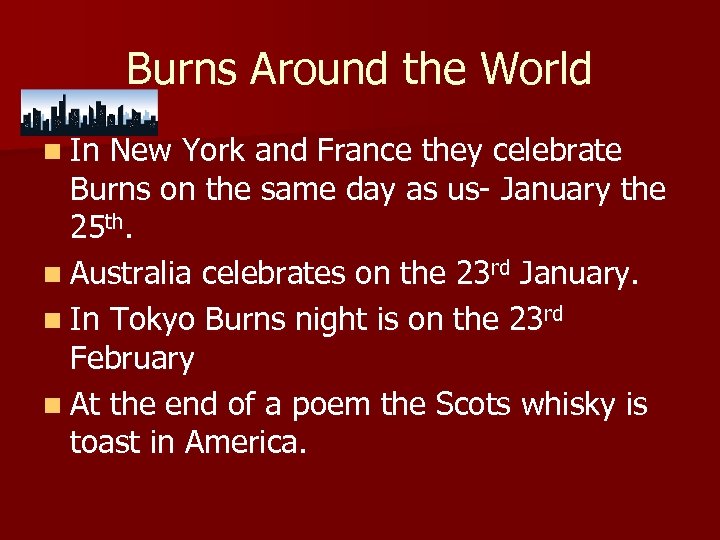 Burns’ childhood n n n n He was born on the 25 th of January 1759. He was a farmer when he was young. His dad was called William Burnes and his mum was called Agnes Broun. He was the eldest of 7 children. The wee two room cottage was hand built by his father William Burns. Robert Burns was born 2 miles south of Ayr in Alloway. When he was 7 years old his father rented a small area of land 1. 5 miles away from Mount Oliphant Farm. As well as hiring a teacher, Robert Burns’ father also taught him.

Burns’ Poems In his lifetime he wrote 559 poems n My love is like a red, red rose n Auld Lang Syne n Holy Wullie’s prayer n Whistle and I’ll come to you my lad n Tam o’shanter n Address to the haggis n My Hoggie n Address to toothache n To a mouse n To a mountain daisy

Places He lived n Burns first house was ‘Coach and Horses Inn, ’ white sands in Dumfries. n His second house was called ‘Burns House’ on St Michael Street in Dumfries n Also, Burns lived in the South of Ayr then he moved to Tarbolton in 1777 n Robert Burns lived on Mount Oliphant Farm. He did work on it.

Burns’ Adulthood n n n n Robert Burns wasn’t just a poet he was a lyricist, farmer, tax collector He met Jean Armour in 1784 Jean Armour gave birth to twins in 1786 Robert Burns and Jean Armour got married in 1788 Robert Burns and Agnes Brown had children called Gilbert, Agnes, Arabella, John, William and Isabella. Agnes was the oldest. On the same day he died his son Maxwell was born He was married 3 times.

Burns Supper n The Burns supper is an important tradition for millions of people. Each Burns Supper has its own special form and flavour. Some celebrations may contribute the original Scots poems and songs. At a Burns supper people eat neeps and haggis and drink whisky. They sing songs such as ‘Love is like a red, red rose’, ‘Rantin, Rovin, Robin’ ‘Tam o’shanter’ ‘Holy Wullie’s prayer’, ‘To a louse’ and ‘Address to the haggis’. A short but important prayer to usher a meal ‘The Selkirk Grace’.

Burns Around the World n In New York and France they celebrate Burns on the same day as us- January the 25 th. n Australia celebrates on the 23 rd January. n In Tokyo Burns night is on the 23 rd February n At the end of a poem the Scots whisky is toast in America.

Its name originates from one Celtic tribes and