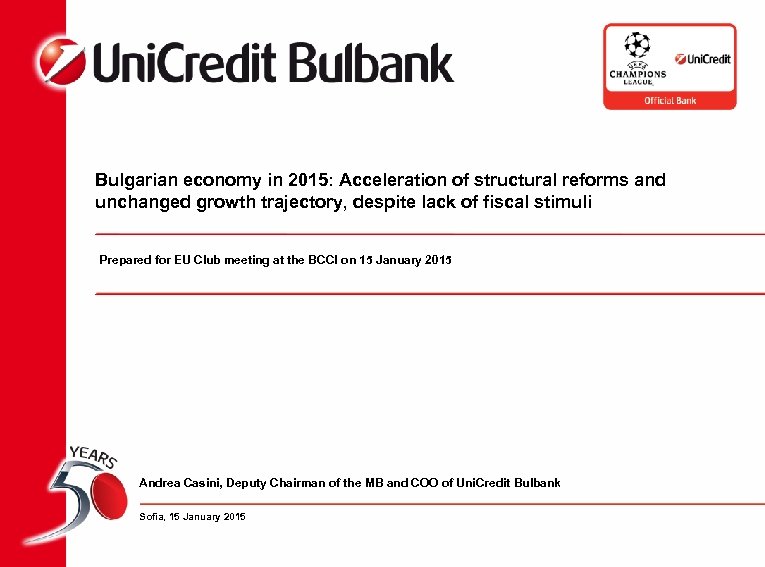 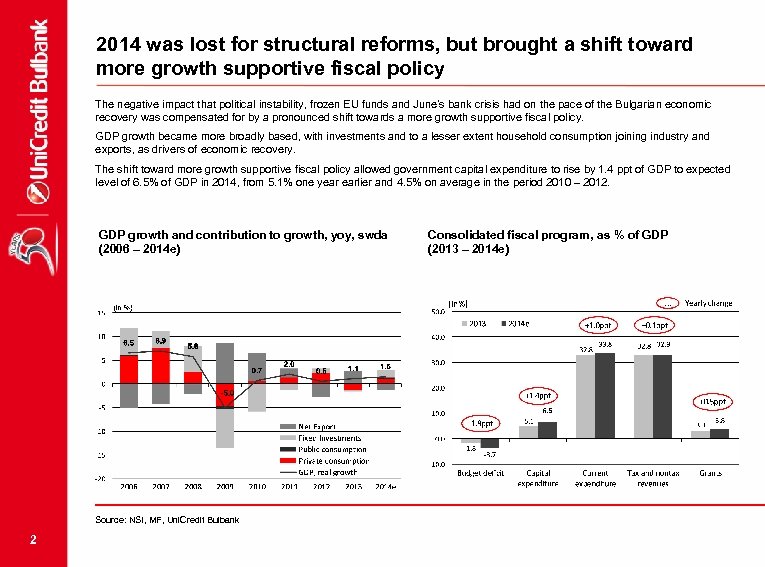 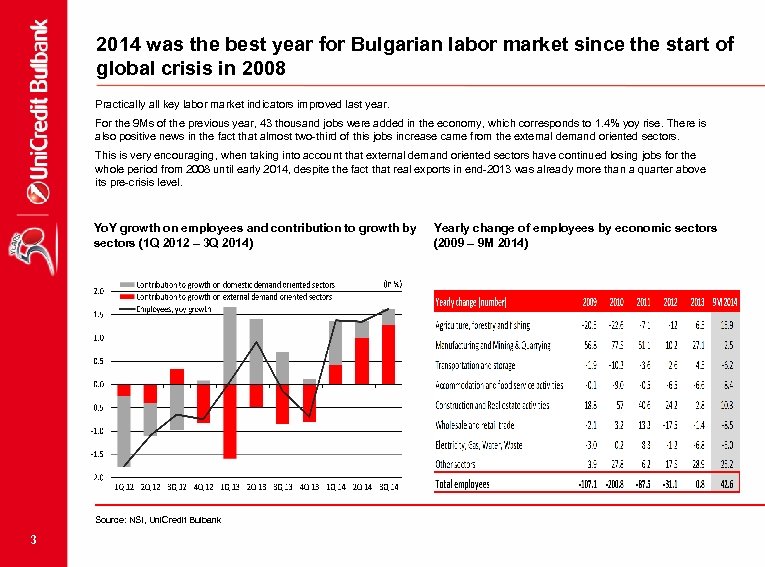 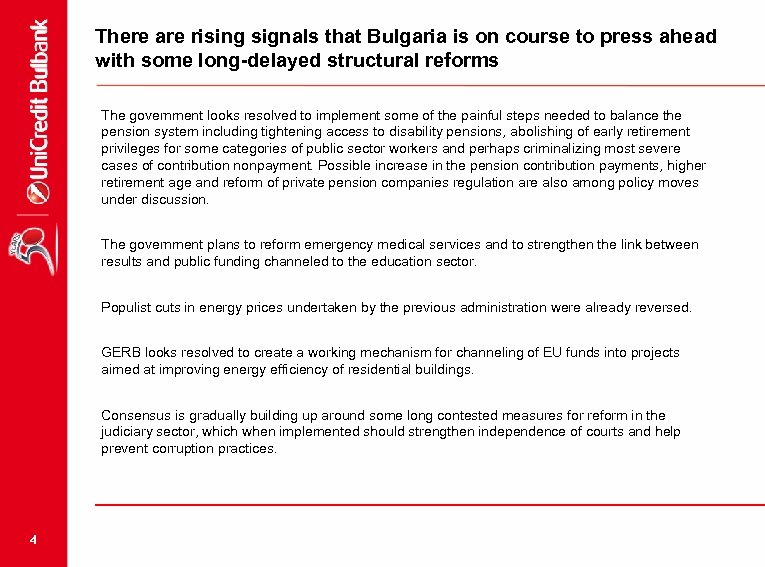 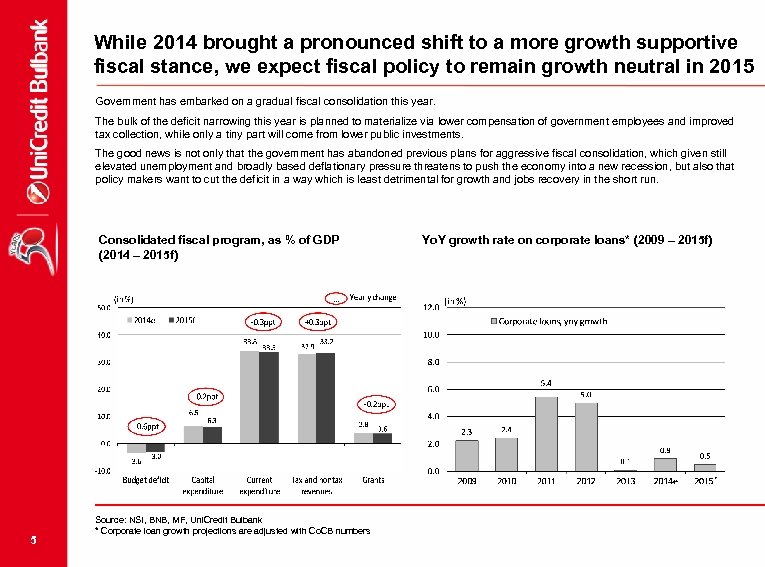 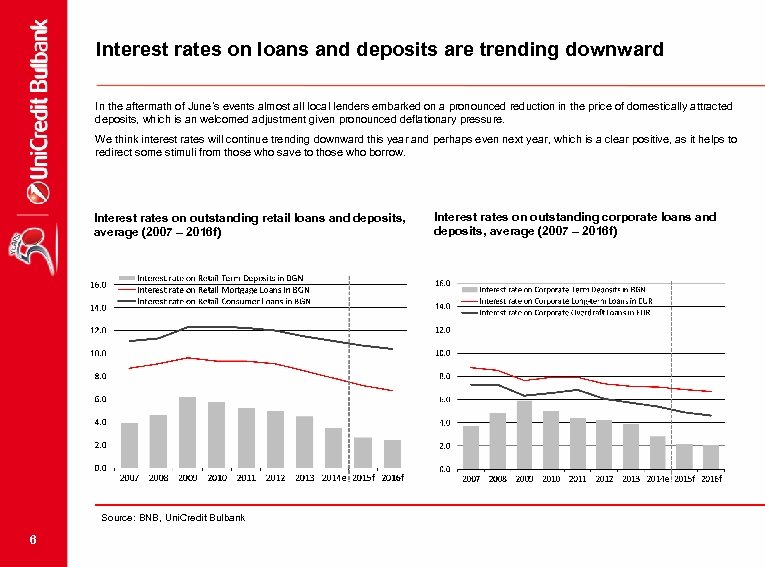 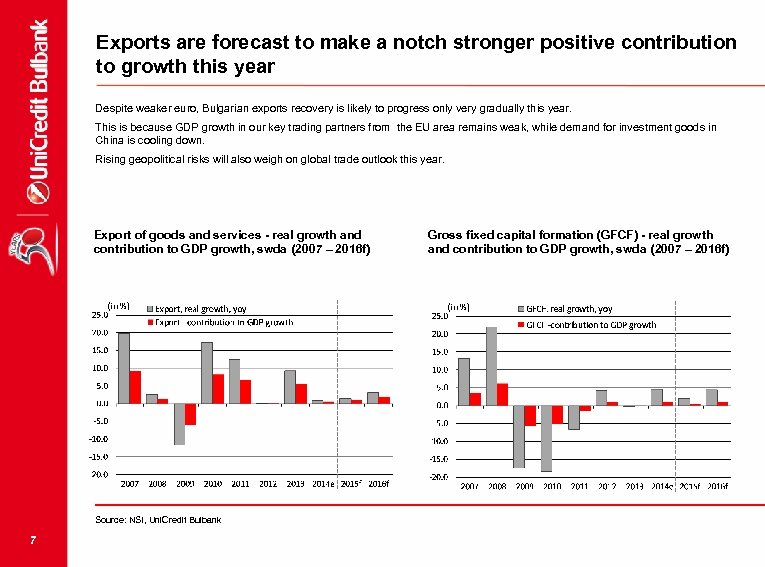 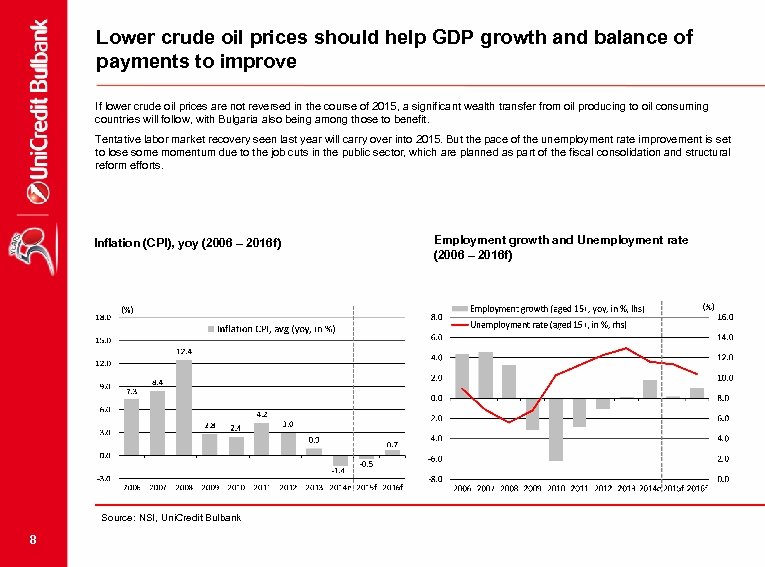 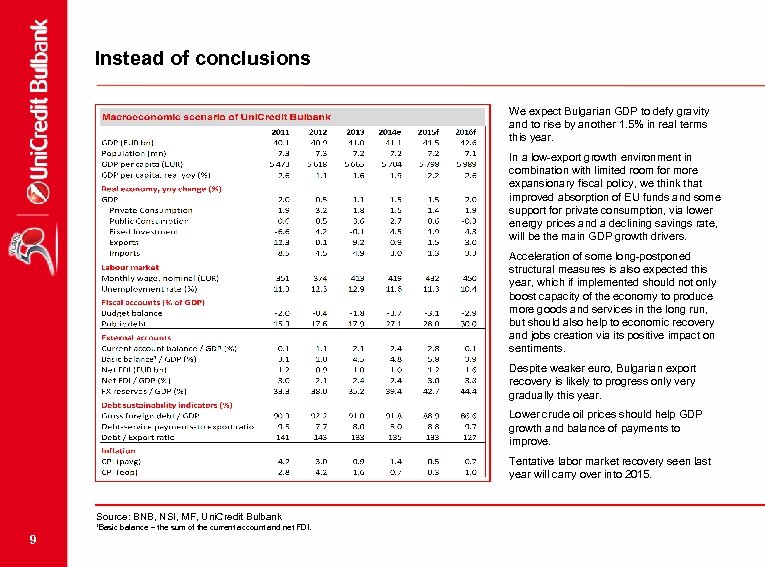 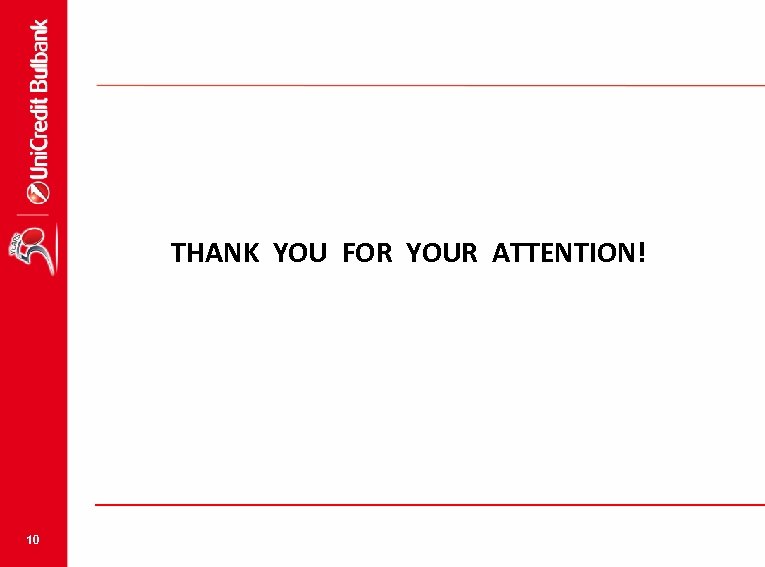 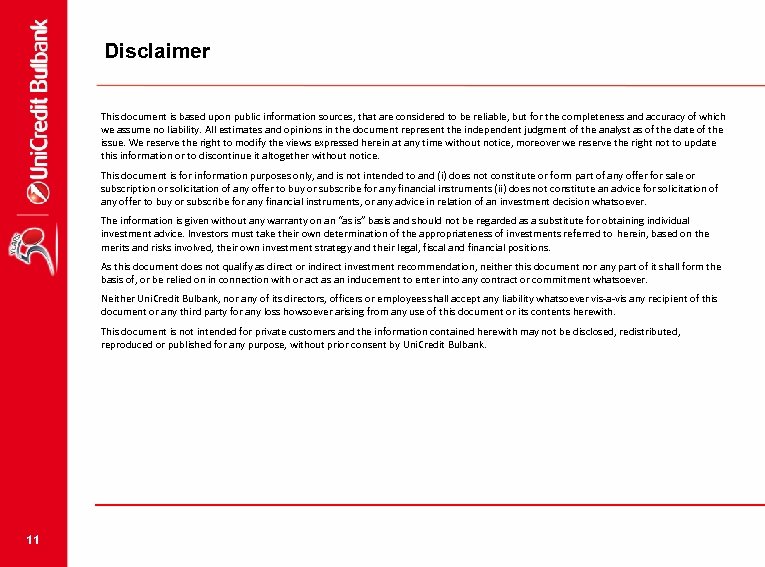 Bulgarian economy in 2015: Acceleration of structural reforms and unchanged growth trajectory, despite lack of fiscal stimuli Prepared for EU Club meeting at the BCCI on 15 January 2015 Andrea Casini, Deputy Chairman of the MB and COO of Uni. Credit Bulbank Sofia, 15 January 2015

2014 was lost for structural reforms, but brought a shift toward more growth supportive fiscal policy The negative impact that political instability, frozen EU funds and June’s bank crisis had on the pace of the Bulgarian economic recovery was compensated for by a pronounced shift towards a more growth supportive fiscal policy. GDP growth became more broadly based, with investments and to a lesser extent household consumption joining industry and exports, as drivers of economic recovery. The shift toward more growth supportive fiscal policy allowed government capital expenditure to rise by 1. 4 ppt of GDP to expected level of 6. 5% of GDP in 2014, from 5. 1% one year earlier and 4. 5% on average in the period 2010 – 2012. GDP growth and contribution to growth, yoy, swda (2006 – 2014 e) Source: NSI, MF, Uni. Credit Bulbank 2 Consolidated fiscal program, as % of GDP (2013 – 2014 e)

2014 was the best year for Bulgarian labor market since the start of global crisis in 2008 Practically all key labor market indicators improved last year. For the 9 Ms of the previous year, 43 thousand jobs were added in the economy, which corresponds to 1. 4% yoy rise. There is also positive news in the fact that almost two-third of this jobs increase came from the external demand oriented sectors. This is very encouraging, when taking into account that external demand oriented sectors have continued losing jobs for the whole period from 2008 until early 2014, despite the fact that real exports in end-2013 was already more than a quarter above its pre-crisis level. Yo. Y growth on employees and contribution to growth by sectors (1 Q 2012 – 3 Q 2014) Source: NSI, Uni. Credit Bulbank 3 Yearly change of employees by economic sectors (2009 – 9 М 2014)

There are rising signals that Bulgaria is on course to press ahead with some long-delayed structural reforms The government looks resolved to implement some of the painful steps needed to balance the pension system including tightening access to disability pensions, abolishing of early retirement privileges for some categories of public sector workers and perhaps criminalizing most severe cases of contribution nonpayment. Possible increase in the pension contribution payments, higher retirement age and reform of private pension companies regulation are also among policy moves under discussion. The government plans to reform emergency medical services and to strengthen the link between results and public funding channeled to the education sector. Populist cuts in energy prices undertaken by the previous administration were already reversed. GERB looks resolved to create a working mechanism for channeling of EU funds into projects aimed at improving energy efficiency of residential buildings. Consensus is gradually building up around some long contested measures for reform in the judiciary sector, which when implemented should strengthen independence of courts and help prevent corruption practices. 4

While 2014 brought a pronounced shift to a more growth supportive fiscal stance, we expect fiscal policy to remain growth neutral in 2015 Government has embarked on a gradual fiscal consolidation this year. The bulk of the deficit narrowing this year is planned to materialize via lower compensation of government employees and improved tax collection, while only a tiny part will come from lower public investments. The good news is not only that the government has abandoned previous plans for aggressive fiscal consolidation, which given still elevated unemployment and broadly based deflationary pressure threatens to push the economy into a new recession, but also that policy makers want to cut the deficit in a way which is least detrimental for growth and jobs recovery in the short run. Consolidated fiscal program, as % of GDP (2014 – 2015 f) 5 Source: NSI, BNB, MF, Uni. Credit Bulbank * Corporate loan growth projections are adjusted with Co. CB numbers Yo. Y growth rate on corporate loans* (2009 – 2015 f)

Lower crude oil prices should help GDP growth and balance of payments to improve If lower crude oil prices are not reversed in the course of 2015, a significant wealth transfer from oil producing to oil consuming countries will follow, with Bulgaria also being among those to benefit. Tentative labor market recovery seen last year will carry over into 2015. But the pace of the unemployment rate improvement is set to lose some momentum due to the job cuts in the public sector, which are planned as part of the fiscal consolidation and structural reform efforts. Inflation (CPI), yoy (2006 – 2016 f) Source: NSI, Uni. Credit Bulbank 8 Employment growth and Unemployment rate (2006 – 2016 f)

Instead of conclusions We expect Bulgarian GDP to defy gravity and to rise by another 1. 5% in real terms this year. In a low-export growth environment in combination with limited room for more expansionary fiscal policy, we think that improved absorption of EU funds and some support for private consumption, via lower energy prices and a declining savings rate, will be the main GDP growth drivers. Acceleration of some long-postponed structural measures is also expected this year, which if implemented should not only boost capacity of the economy to produce more goods and services in the long run, but should also help to economic recovery and jobs creation via its positive impact on sentiments. Despite weaker euro, Bulgarian export recovery is likely to progress only very gradually this year. Lower crude oil prices should help GDP growth and balance of payments to improve. Tentative labor market recovery seen last year will carry over into 2015. Source: BNB, NSI, MF, Uni. Credit Bulbank ¹Basic balance – the sum of the current account and net FDI. 9

THANK YOU FOR YOUR ATTENTION! 10

Disclaimer This document is based upon public information sources, that are considered to be reliable, but for the completeness and accuracy of which we assume no liability. All estimates and opinions in the document represent the independent judgment of the analyst as of the date of the issue. We reserve the right to modify the views expressed herein at any time without notice, moreover we reserve the right not to update this information or to discontinue it altogether without notice. This document is for information purposes only, and is not intended to and (i) does not constitute or form part of any offer for sale or subscription or solicitation of any offer to buy or subscribe for any financial instruments (ii) does not constitute an advice for solicitation of any offer to buy or subscribe for any financial instruments, or any advice in relation of an investment decision whatsoever. The information is given without any warranty on an “as is” basis and should not be regarded as a substitute for obtaining individual investment advice. Investors must take their own determination of the appropriateness of investments referred to herein, based on the merits and risks involved, their own investment strategy and their legal, fiscal and financial positions. As this document does not qualify as direct or indirect investment recommendation, neither this document nor any part of it shall form the basis of, or be relied on in connection with or act as an inducement to enter into any contract or commitment whatsoever. Neither Uni. Credit Bulbank, nor any of its directors, officers or employees shall accept any liability whatsoever vis-a-vis any recipient of this document or any third party for any loss howsoever arising from any use of this document or its contents herewith. This document is not intended for private customers and the information contained herewith may not be disclosed, redistributed, reproduced or published for any purpose, without prior consent by Uni. Credit Bulbank. 11