British museum The British Museum in London is 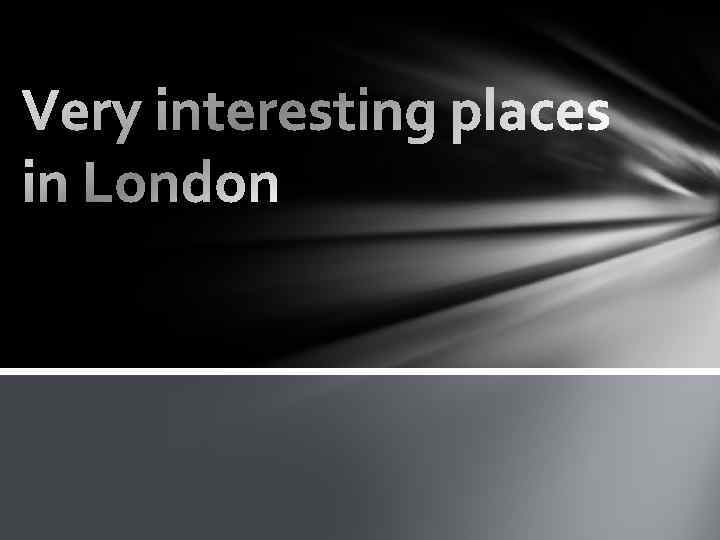 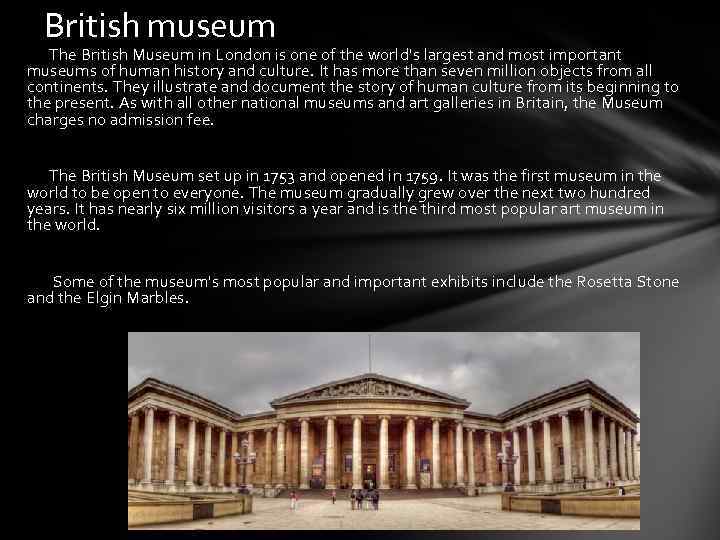 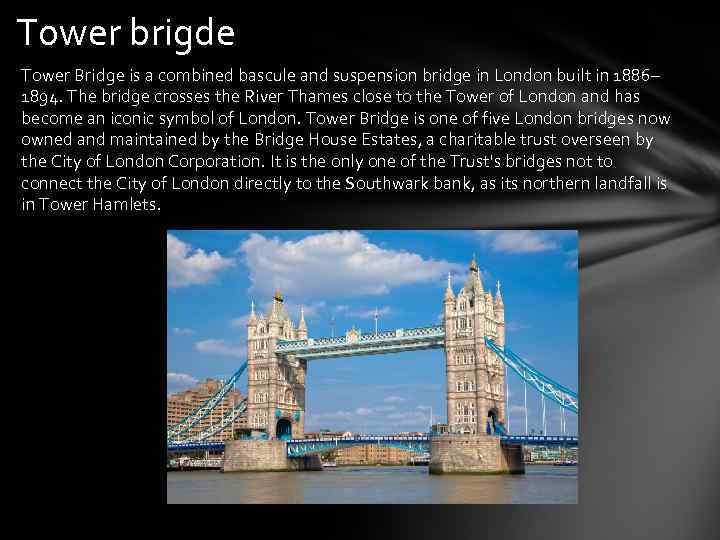 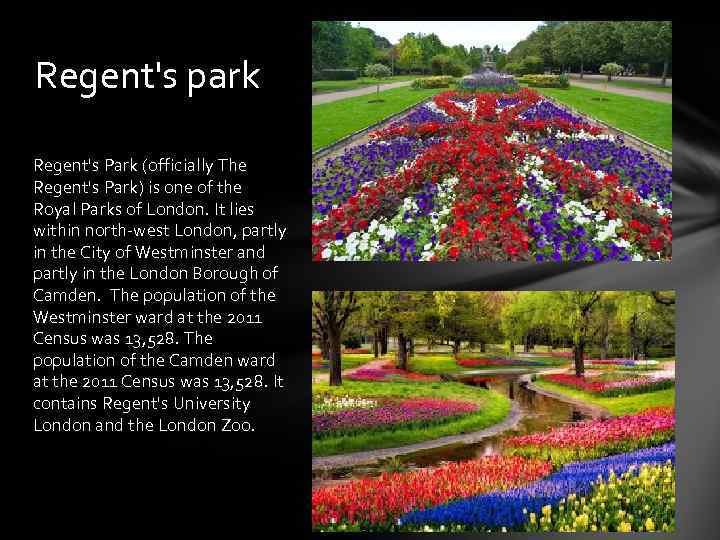 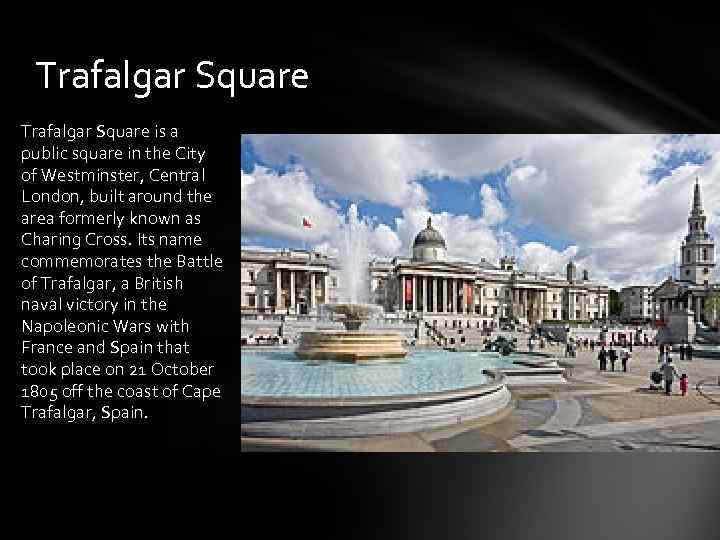 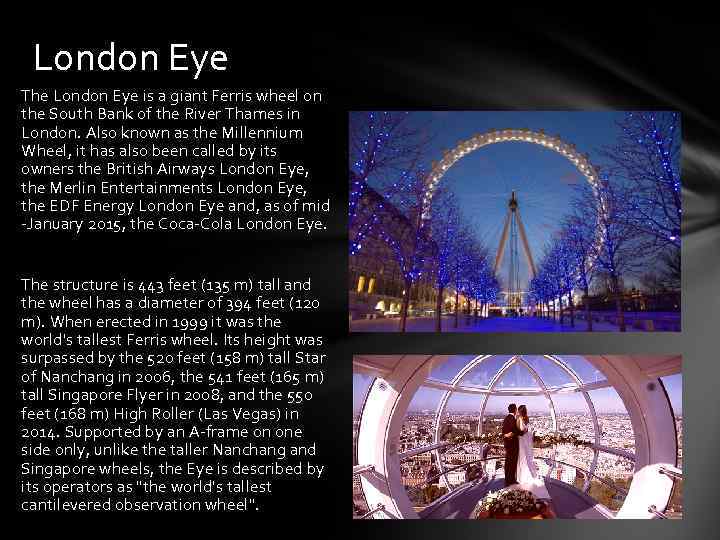 Скачать презентацию British museum The British Museum in London is

British museum The British Museum in London is one of the world's largest and most important museums of human history and culture. It has more than seven million objects from all continents. They illustrate and document the story of human culture from its beginning to the present. As with all other national museums and art galleries in Britain, the Museum charges no admission fee. The British Museum set up in 1753 and opened in 1759. It was the first museum in the world to be open to everyone. The museum gradually grew over the next two hundred years. It has nearly six million visitors a year and is the third most popular art museum in the world. Some of the museum's most popular and important exhibits include the Rosetta Stone and the Elgin Marbles.

Tower brigde Tower Bridge is a combined bascule and suspension bridge in London built in 1886– 1894. The bridge crosses the River Thames close to the Tower of London and has become an iconic symbol of London. Tower Bridge is one of five London bridges now owned and maintained by the Bridge House Estates, a charitable trust overseen by the City of London Corporation. It is the only one of the Trust's bridges not to connect the City of London directly to the Southwark bank, as its northern landfall is in Tower Hamlets.

Regent's park Regent's Park (officially The Regent's Park) is one of the Royal Parks of London. It lies within north-west London, partly in the City of Westminster and partly in the London Borough of Camden. The population of the Westminster ward at the 2011 Census was 13, 528. The population of the Camden ward at the 2011 Census was 13, 528. It contains Regent's University London and the London Zoo.

Trafalgar Square is a public square in the City of Westminster, Central London, built around the area formerly known as Charing Cross. Its name commemorates the Battle of Trafalgar, a British naval victory in the Napoleonic Wars with France and Spain that took place on 21 October 1805 off the coast of Cape Trafalgar, Spain.

London Eye The London Eye is a giant Ferris wheel on the South Bank of the River Thames in London. Also known as the Millennium Wheel, it has also been called by its owners the British Airways London Eye, the Merlin Entertainments London Eye, the EDF Energy London Eye and, as of mid -January 2015, the Coca-Cola London Eye. The structure is 443 feet (135 m) tall and the wheel has a diameter of 394 feet (120 m). When erected in 1999 it was the world's tallest Ferris wheel. Its height was surpassed by the 520 feet (158 m) tall Star of Nanchang in 2006, the 541 feet (165 m) tall Singapore Flyer in 2008, and the 550 feet (168 m) High Roller (Las Vegas) in 2014. Supported by an A-frame on one side only, unlike the taller Nanchang and Singapore wheels, the Eye is described by its operators as "the world's tallest cantilevered observation wheel".