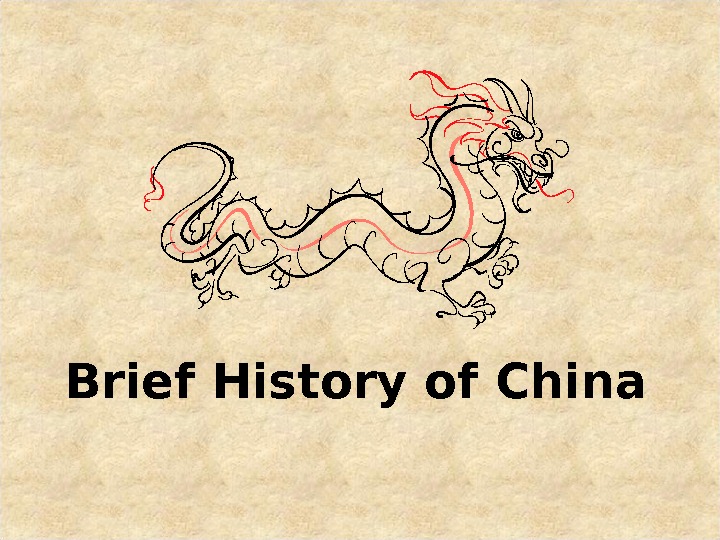 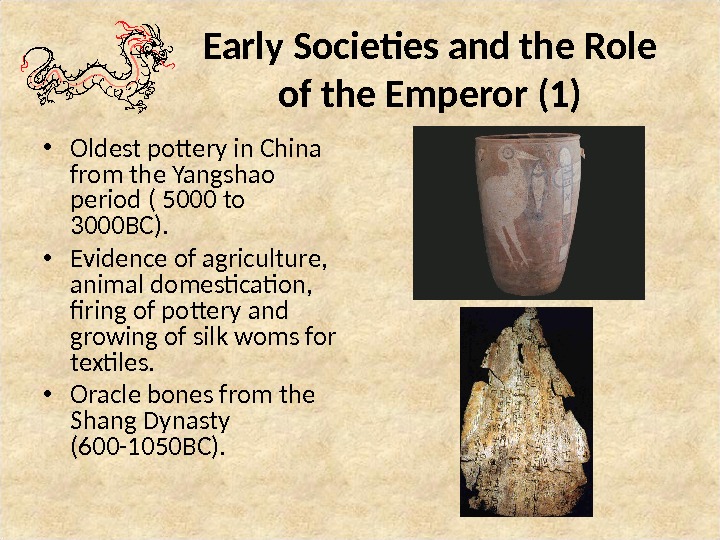 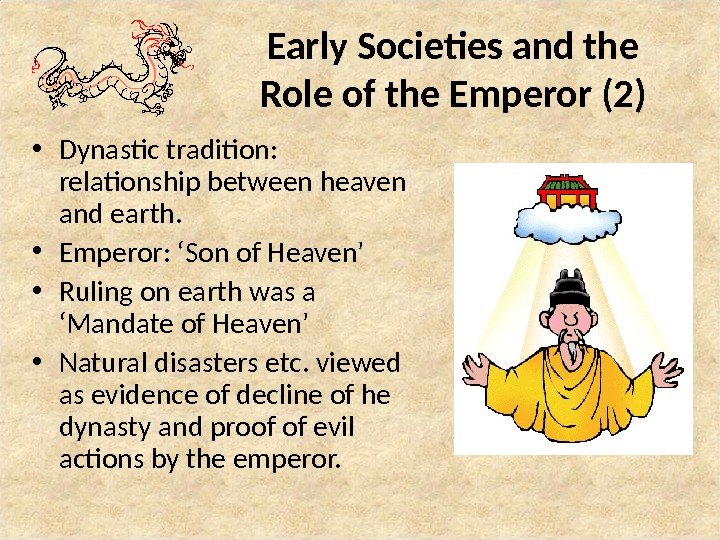 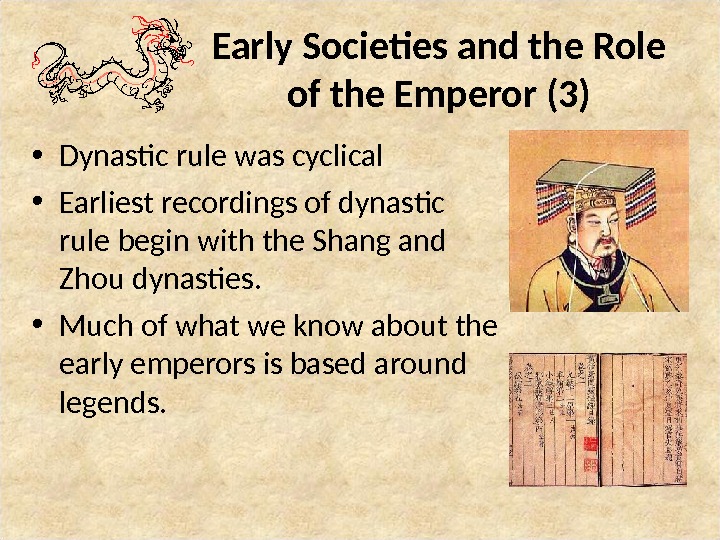 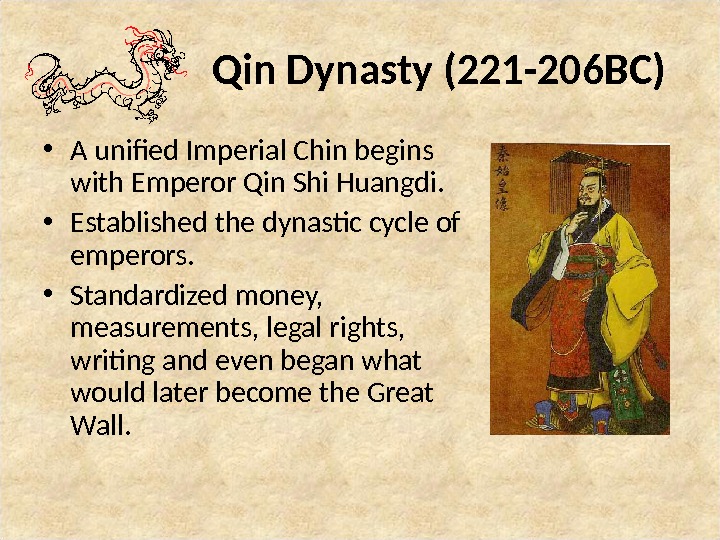 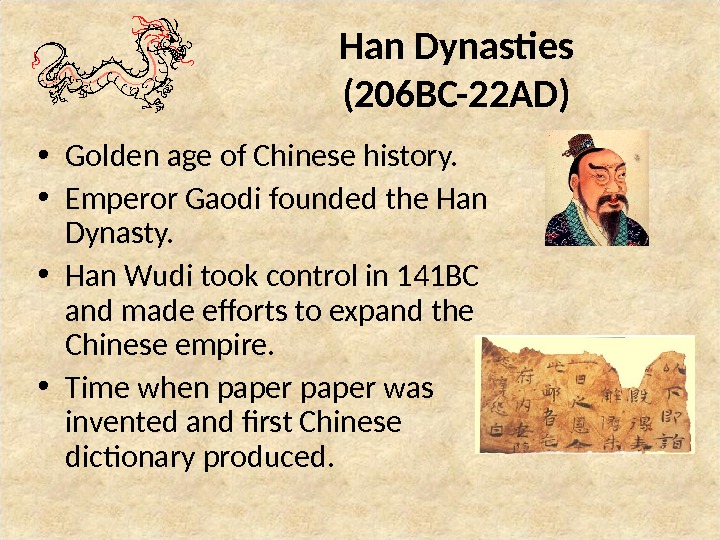 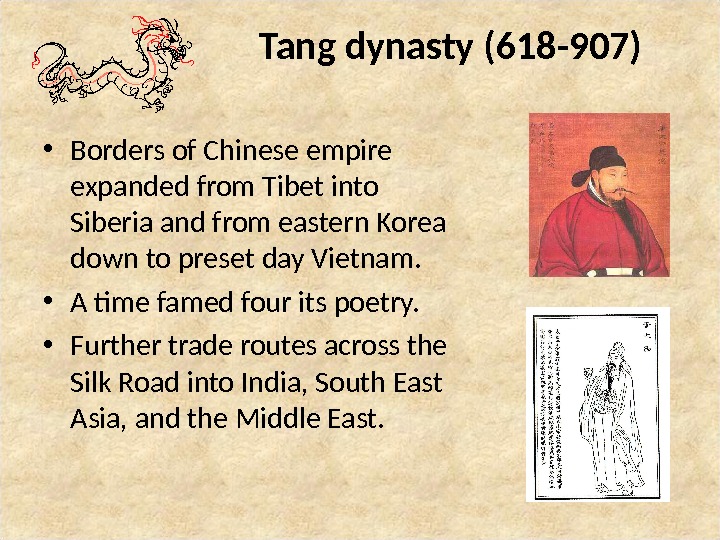 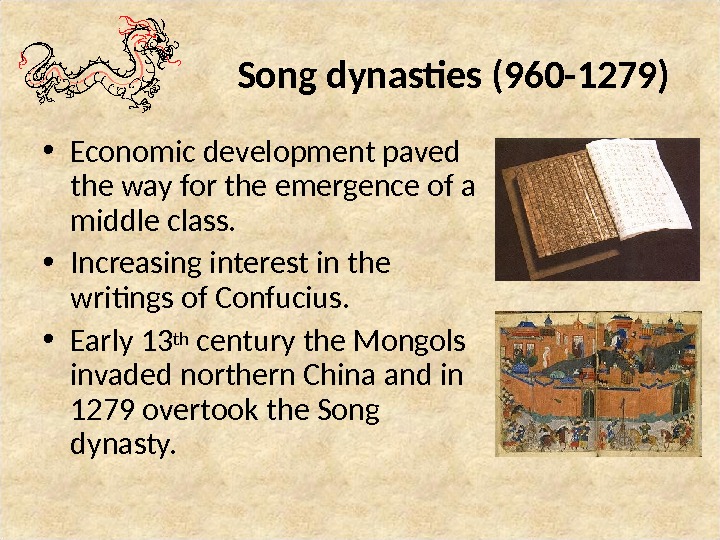 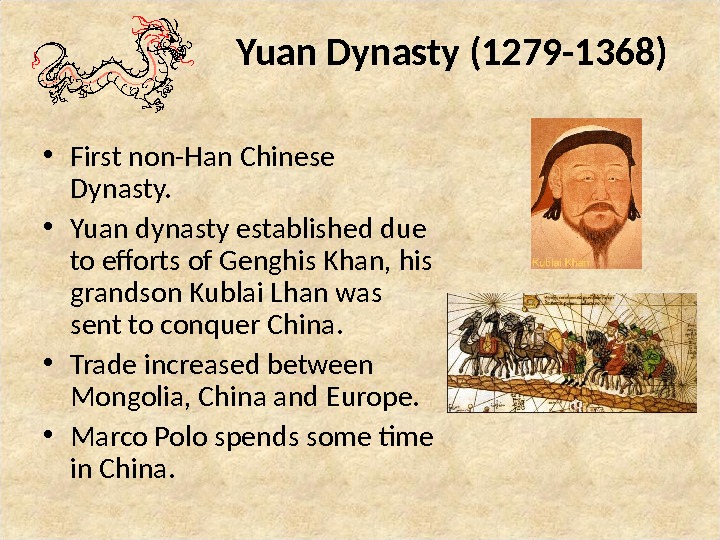 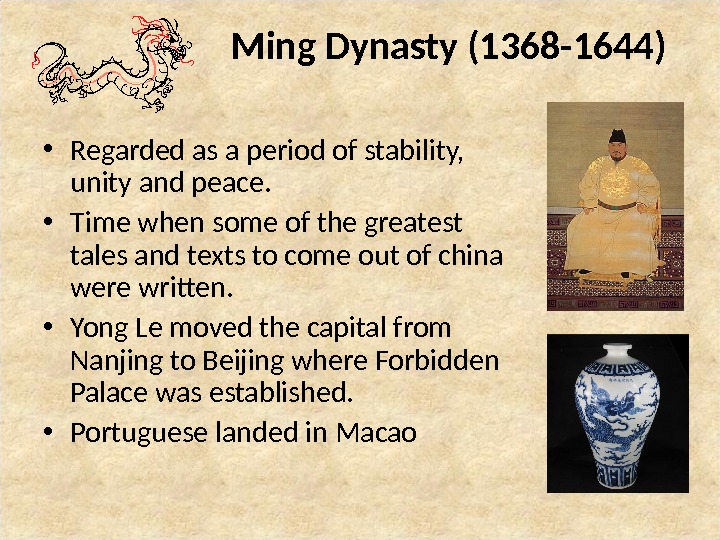 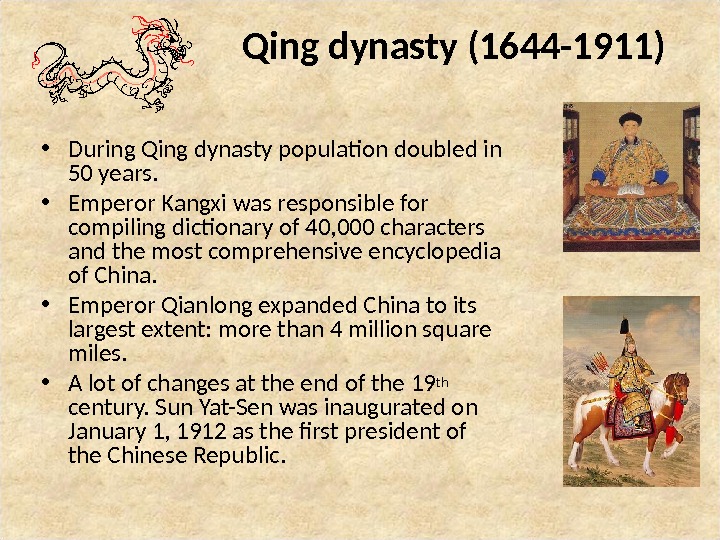 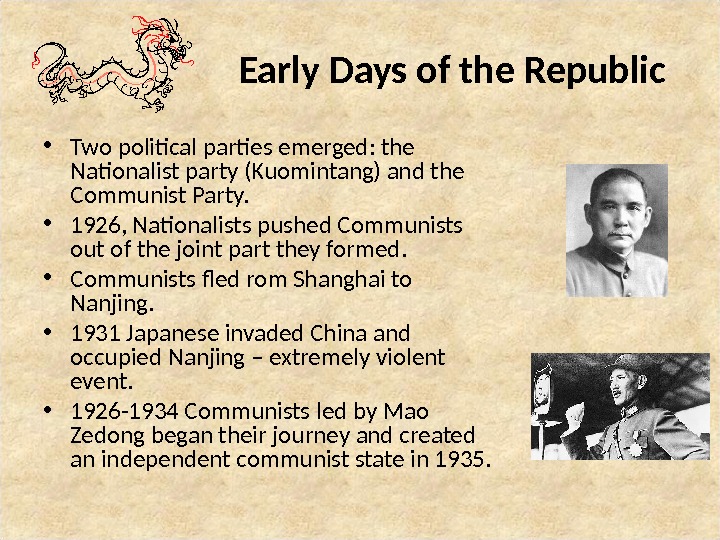 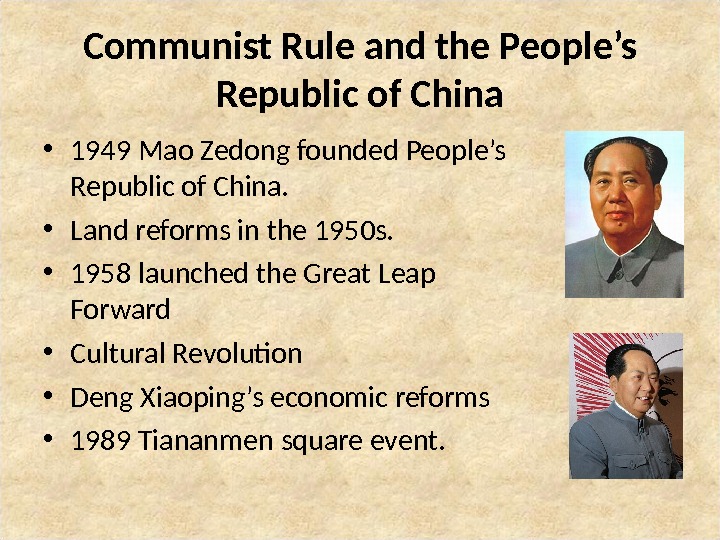 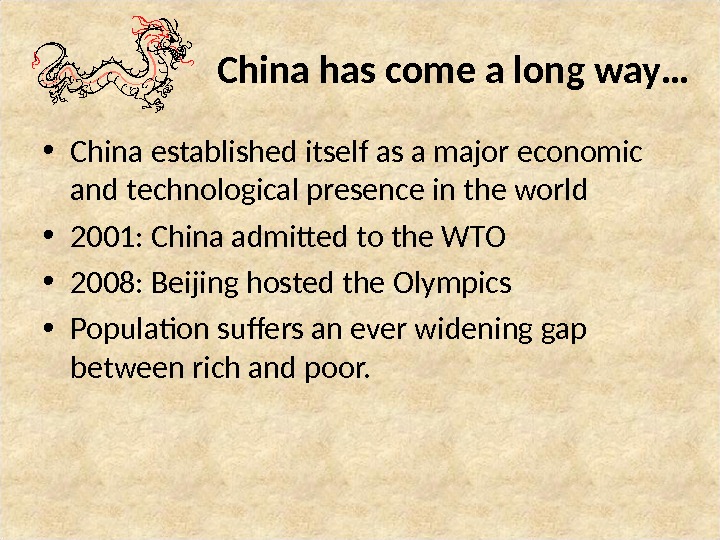 Early Societies and the Role of the Emperor (1) • Oldest pottery in China from the Yangshao period ( 5000 to 3000 BC). • Evidence of agriculture, animal domestication, firing of pottery and growing of silk woms for textiles. • Oracle bones from the Shang Dynasty (600 -1050 BC).

Early Societies and the Role of the Emperor (2) • Dynastic tradition: relationship between heaven and earth. • Emperor: ‘Son of Heaven’ • Ruling on earth was a ‘Mandate of Heaven’ • Natural disasters etc. viewed as evidence of decline of he dynasty and proof of evil actions by the emperor.

Early Societies and the Role of the Emperor (3) • Dynastic rule was cyclical • Earliest recordings of dynastic rule begin with the Shang and Zhou dynasties. • Much of what we know about the early emperors is based around legends.

Han Dynasties (206 BC-22 AD) • Golden age of Chinese history. • Emperor Gaodi founded the Han Dynasty. • Han Wudi took control in 141 BC and made efforts to expand the Chinese empire. • Time when paper was invented and first Chinese dictionary produced.

Tang dynasty (618 -907) • Borders of Chinese empire expanded from Tibet into Siberia and from eastern Korea down to preset day Vietnam. • A time famed four its poetry. • Further trade routes across the Silk Road into India, South East Asia, and the Middle East.

Song dynasties (960 -1279) • Economic development paved the way for the emergence of a middle class. • Increasing interest in the writings of Confucius. • Early 13 th century the Mongols invaded northern China and in 1279 overtook the Song dynasty.

Ming Dynasty (1368 -1644) • Regarded as a period of stability, unity and peace. • Time when some of the greatest tales and texts to come out of china were written. • Yong Le moved the capital from Nanjing to Beijing where Forbidden Palace was established. • Portuguese landed in Macao

Qing dynasty (1644 -1911) • During Qing dynasty population doubled in 50 years. • Emperor Kangxi was responsible for compiling dictionary of 40, 000 characters and the most comprehensive encyclopedia of China. • Emperor Qianlong expanded China to its largest extent: more than 4 million square miles. • A lot of changes at the end of the 19 th century. Sun Yat-Sen was inaugurated on January 1, 1912 as the first president of the Chinese Republic.

China has come a long way… • China established itself as a major economic and technological presence in the world • 2001: China admitted to the WTO • 2008: Beijing hosted the Olympics • Population suffers an ever widening gap between rich and poor.