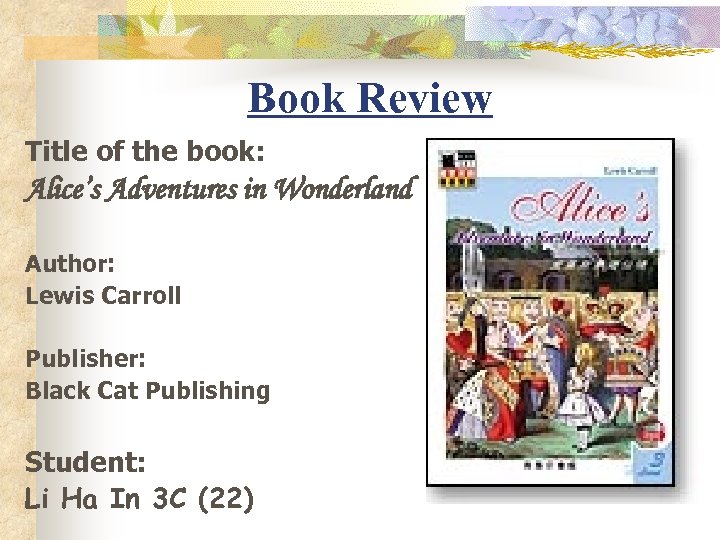 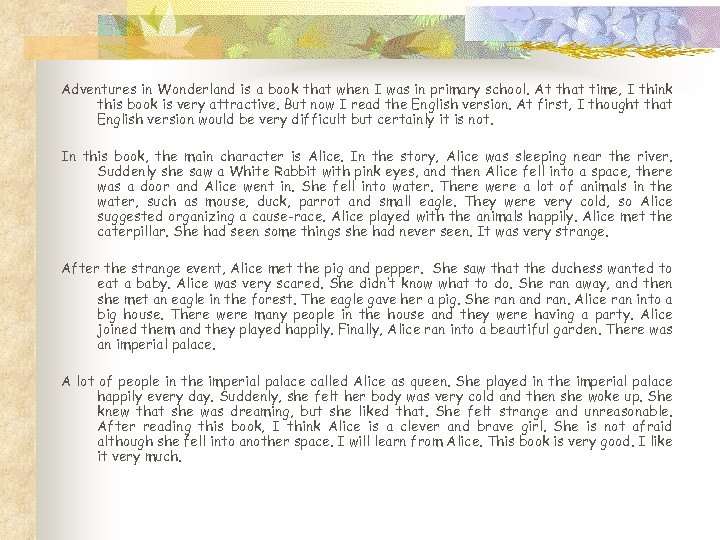 Adventures in Wonderland is a book that when I was in primary school. At that time, I think this book is very attractive. But now I read the English version. At first, I thought that English version would be very difficult but certainly it is not. In this book, the main character is Alice. In the story, Alice was sleeping near the river. Suddenly she saw a White Rabbit with pink eyes, and then Alice fell into a space, there was a door and Alice went in. She fell into water. There were a lot of animals in the water, such as mouse, duck, parrot and small eagle. They were very cold, so Alice suggested organizing a cause-race. Alice played with the animals happily. Alice met the caterpillar. She had seen some things she had never seen. It was very strange. After the strange event, Alice met the pig and pepper. She saw that the duchess wanted to eat a baby. Alice was very scared. She didn’t know what to do. She ran away, and then she met an eagle in the forest. The eagle gave her a pig. She ran and ran. Alice ran into a big house. There were many people in the house and they were having a party. Alice joined them and they played happily. Finally, Alice ran into a beautiful garden. There was an imperial palace. A lot of people in the imperial palace called Alice as queen. She played in the imperial palace happily every day. Suddenly, she felt her body was very cold and then she woke up. She knew that she was dreaming, but she liked that. She felt strange and unreasonable. After reading this book, I think Alice is a clever and brave girl. She is not afraid although she fell into another space. I will learn from Alice. This book is very good. I like it very much.