Based on this passage what do you think 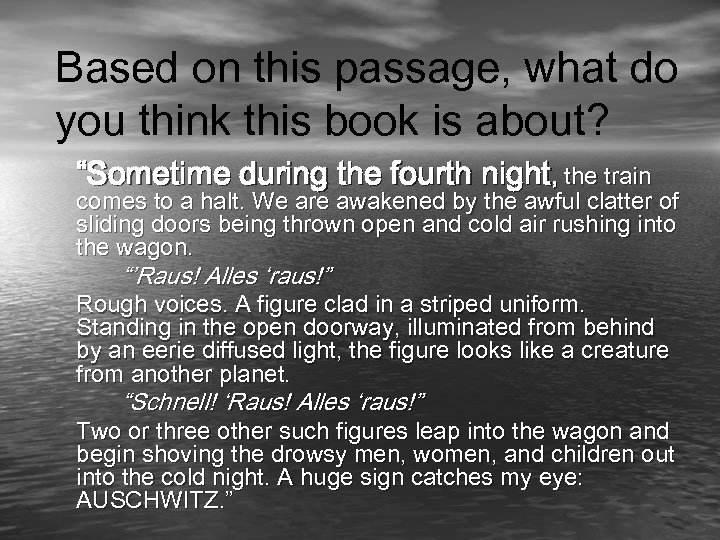 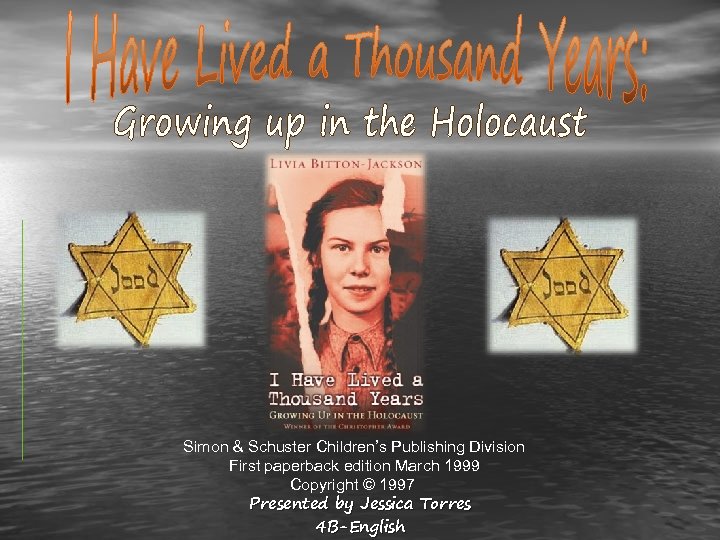 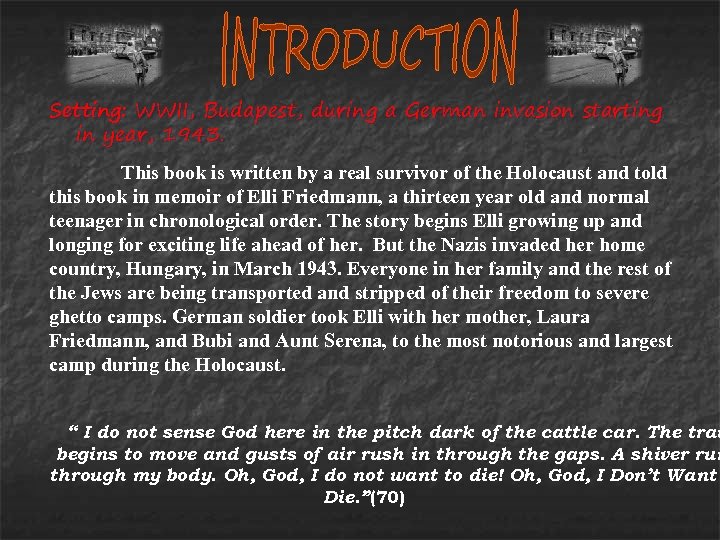 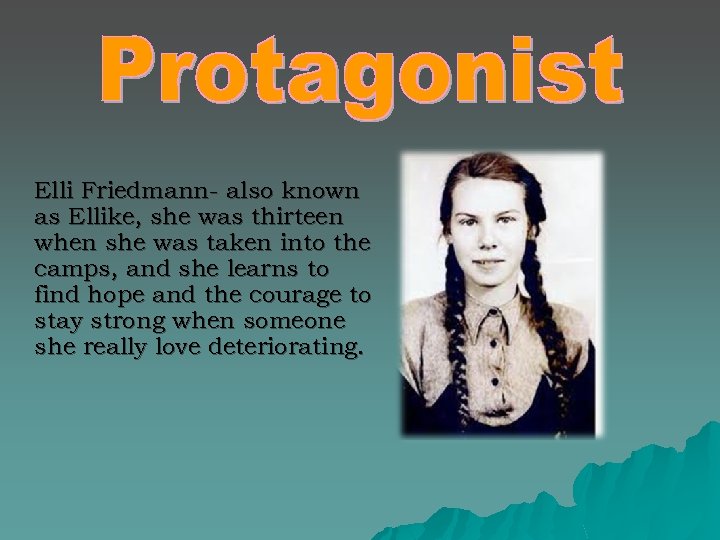 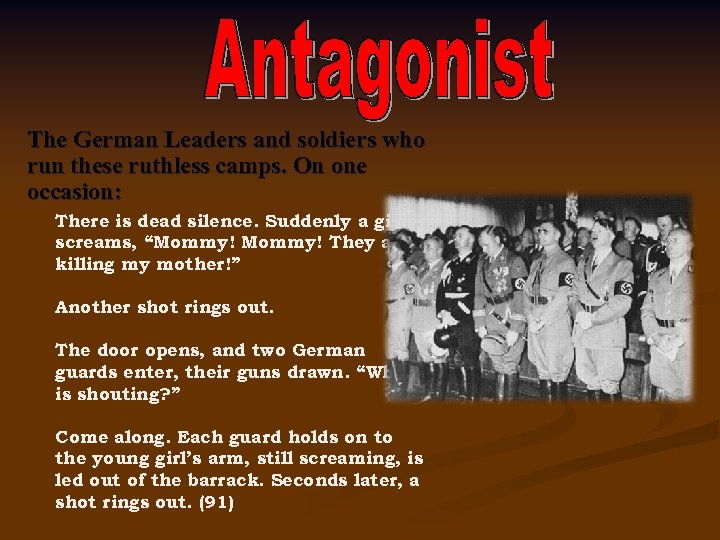 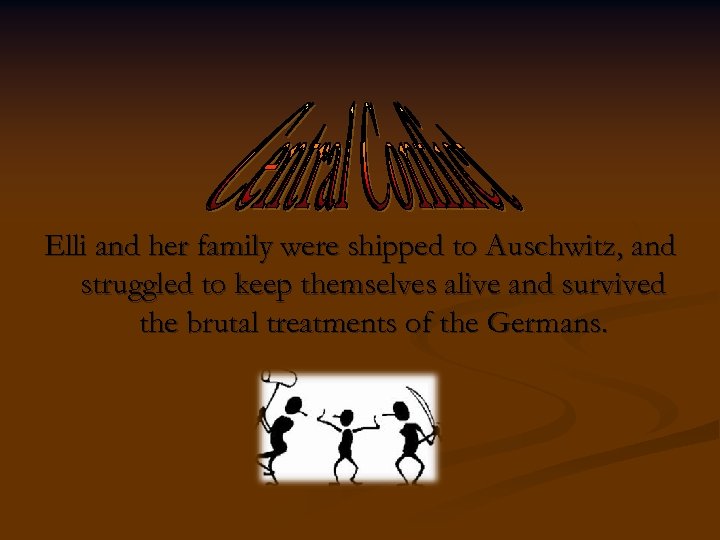 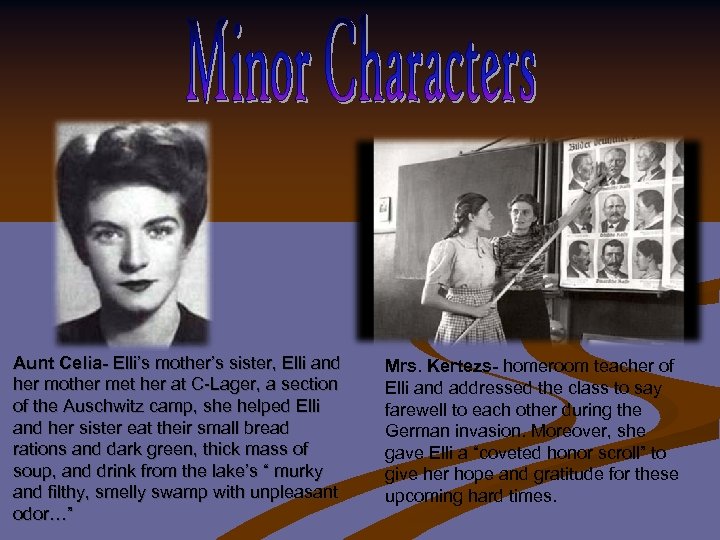 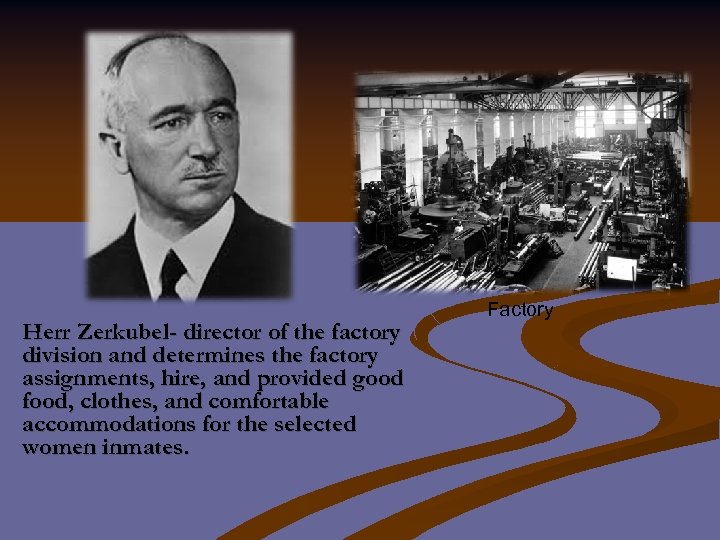 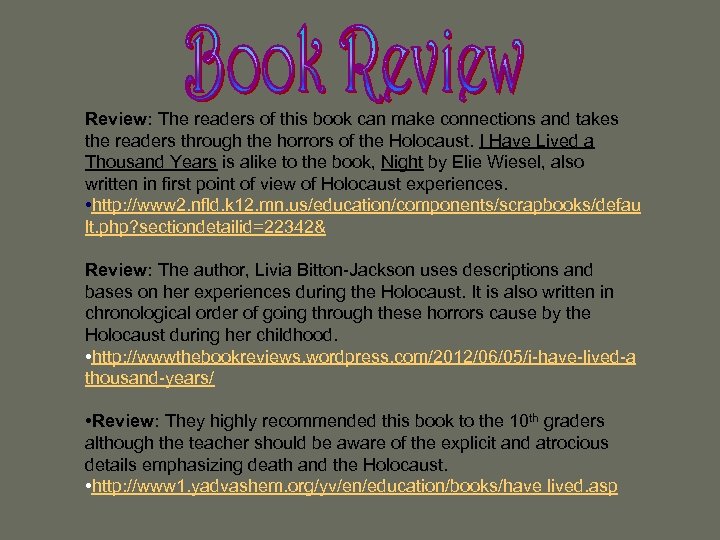 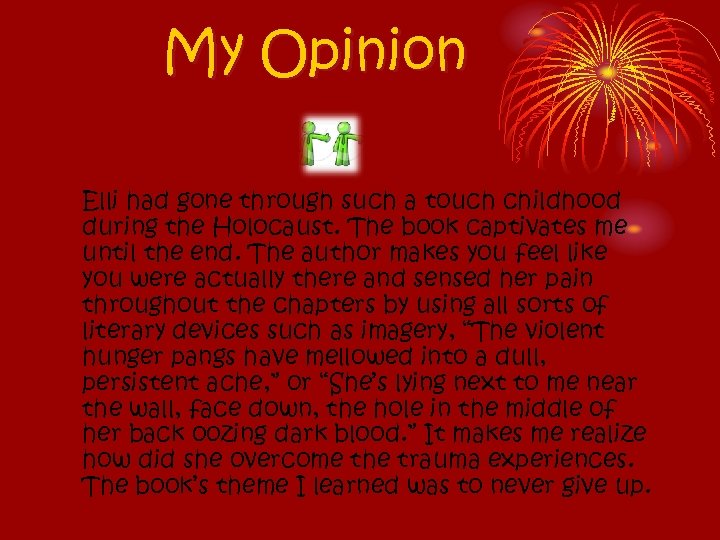 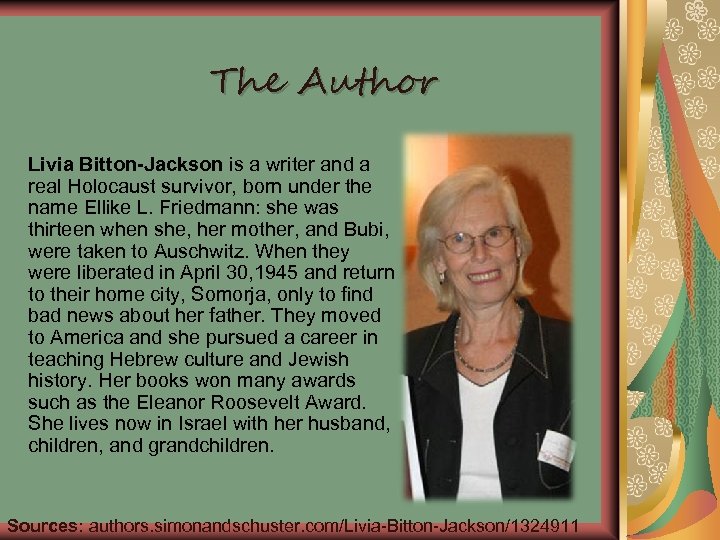 Скачать презентацию Based on this passage what do you think

Based on this passage, what do you think this book is about? “Sometime during the fourth night, the train comes to a halt. We are awakened by the awful clatter of sliding doors being thrown open and cold air rushing into the wagon. “’Raus! Alles ‘raus!” Rough voices. A figure clad in a striped uniform. Standing in the open doorway, illuminated from behind by an eerie diffused light, the figure looks like a creature from another planet. “Schnell! ‘Raus! Alles ‘raus!” Two or three other such figures leap into the wagon and begin shoving the drowsy men, women, and children out into the cold night. A huge sign catches my eye: AUSCHWITZ. ”

Setting: WWII, Budapest, during a German invasion starting in year, 1943. This book is written by a real survivor of the Holocaust and told this book in memoir of Elli Friedmann, a thirteen year old and normal teenager in chronological order. The story begins Elli growing up and longing for exciting life ahead of her. But the Nazis invaded her home country, Hungary, in March 1943. Everyone in her family and the rest of the Jews are being transported and stripped of their freedom to severe ghetto camps. German soldier took Elli with her mother, Laura Friedmann, and Bubi and Aunt Serena, to the most notorious and largest camp during the Holocaust. “ I do not sense God here in the pitch dark of the cattle car. The trai begins to move and gusts of air rush in through the gaps. A shiver run through my body. Oh, God, I do not want to die! Oh, God, I Don’t Want Die. ” (70)

Elli Friedmann- also known as Ellike, she was thirteen when she was taken into the camps, and she learns to find hope and the courage to stay strong when someone she really love deteriorating.

The German Leaders and soldiers who run these ruthless camps. On one occasion: There is dead silence. Suddenly a girl screams, “Mommy! They are killing my mother!” Another shot rings out. The door opens, and two German guards enter, their guns drawn. “Who is shouting? ” Come along. Each guard holds on to the young girl’s arm, still screaming, is led out of the barrack. Seconds later, a shot rings out. (91)

Elli and her family were shipped to Auschwitz, and struggled to keep themselves alive and survived the brutal treatments of the Germans.

Aunt Celia- Elli’s mother’s sister, Elli and her mother met her at C-Lager, a section of the Auschwitz camp, she helped Elli and her sister eat their small bread rations and dark green, thick mass of soup, and drink from the lake’s “ murky and filthy, smelly swamp with unpleasant odor…” Mrs. Kertezs- homeroom teacher of Elli and addressed the class to say farewell to each other during the German invasion. Moreover, she gave Elli a “coveted honor scroll” to give her hope and gratitude for these upcoming hard times.

Review: The readers of this book can make connections and takes the readers through the horrors of the Holocaust. I Have Lived a Thousand Years is alike to the book, Night by Elie Wiesel, also written in first point of view of Holocaust experiences. • http: //www 2. nfld. k 12. mn. us/education/components/scrapbooks/defau lt. php? sectiondetailid=22342& Review: The author, Livia Bitton-Jackson uses descriptions and bases on her experiences during the Holocaust. It is also written in chronological order of going through these horrors cause by the Holocaust during her childhood. • http: //wwwthebookreviews. wordpress. com/2012/06/05/i-have-lived-a thousand-years/ • Review: They highly recommended this book to the 10 th graders although the teacher should be aware of the explicit and atrocious details emphasizing death and the Holocaust. • http: //www 1. yadvashem. org/yv/en/education/books/have lived. asp

My Opinion Elli had gone through such a touch childhood during the Holocaust. The book captivates me until the end. The author makes you feel like you were actually there and sensed her pain throughout the chapters by using all sorts of literary devices such as imagery, “The violent hunger pangs have mellowed into a dull, persistent ache, ” or “She’s lying next to me near the wall, face down, the hole in the middle of her back oozing dark blood. ” It makes me realize how did she overcome the trauma experiences. The book’s theme I learned was to never give up.

The Author Livia Bitton-Jackson is a writer and a real Holocaust survivor, born under the name Ellike L. Friedmann: she was thirteen when she, her mother, and Bubi, were taken to Auschwitz. When they were liberated in April 30, 1945 and return to their home city, Somorja, only to find bad news about her father. They moved to America and she pursued a career in teaching Hebrew culture and Jewish history. Her books won many awards such as the Eleanor Roosevelt Award. She lives now in Israel with her husband, children, and grandchildren. Sources: authors. simonandschuster. com/Livia-Bitton-Jackson/1324911

Richard’s 8 secrets of success Can you