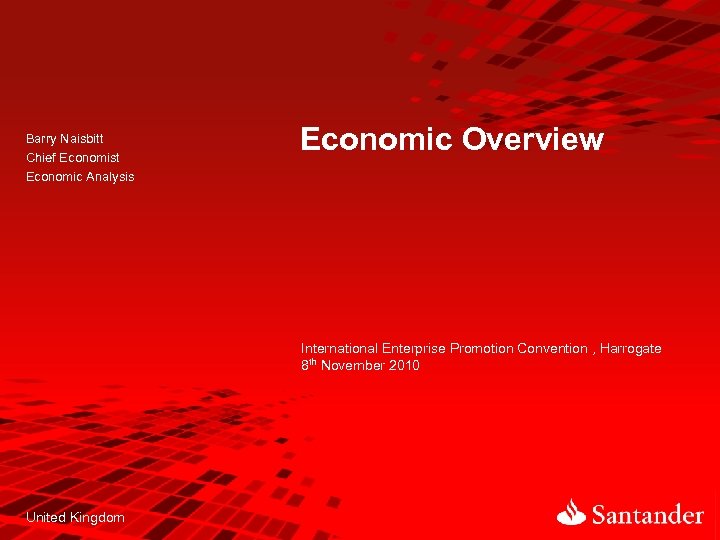 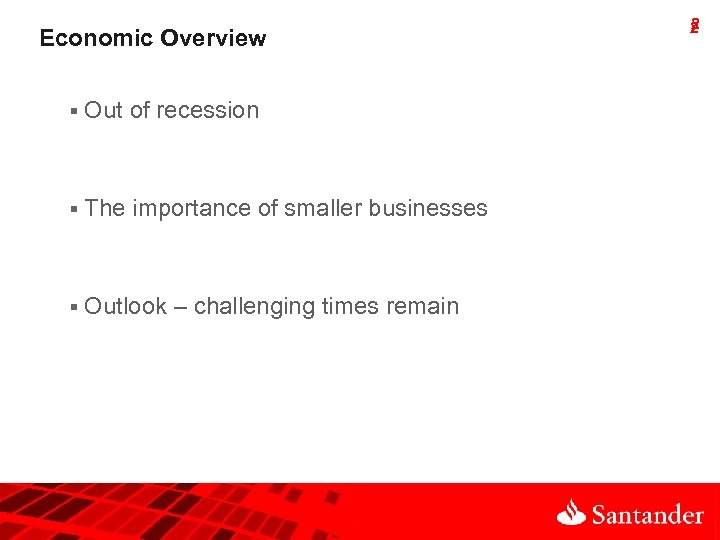 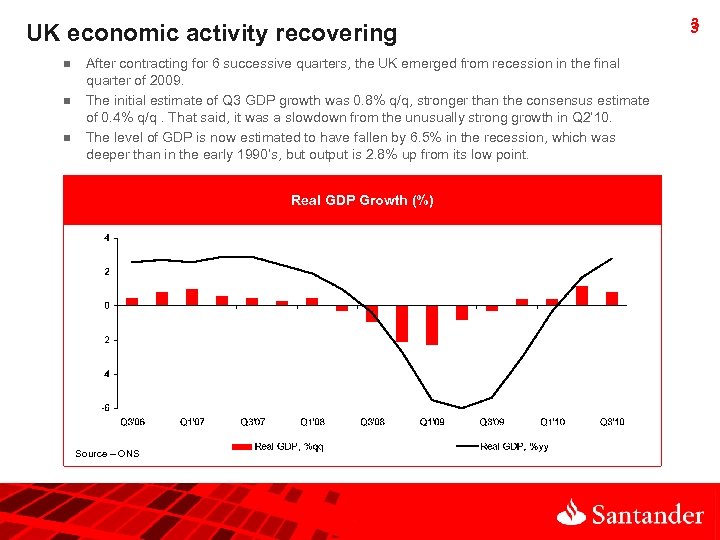 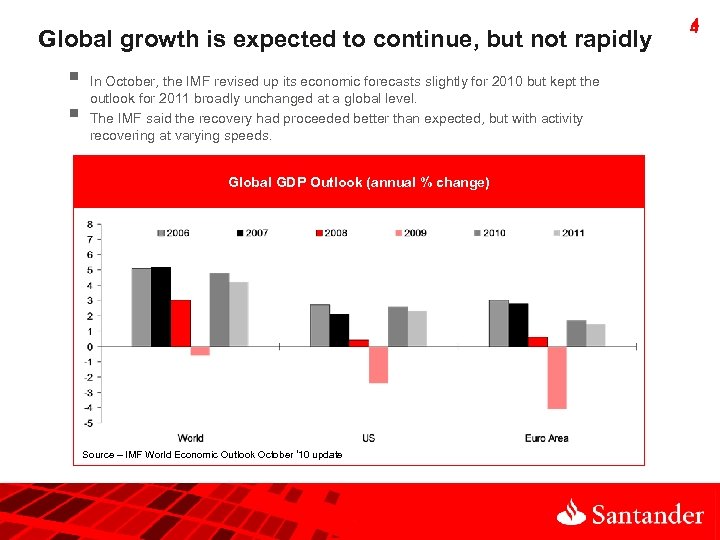 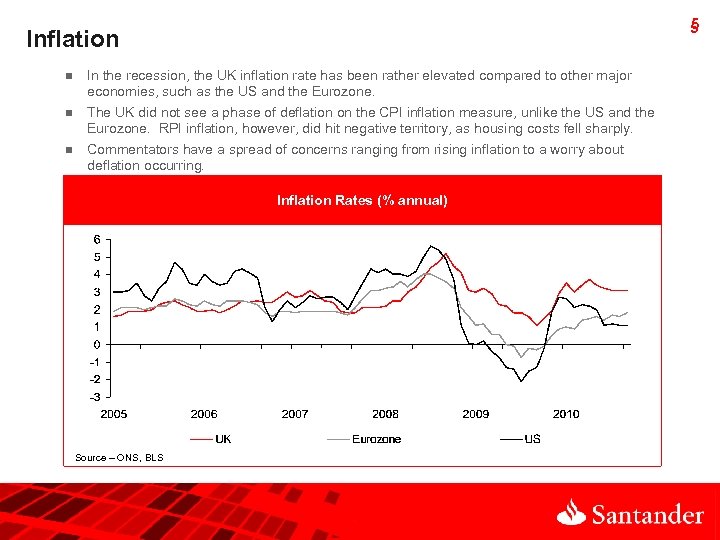 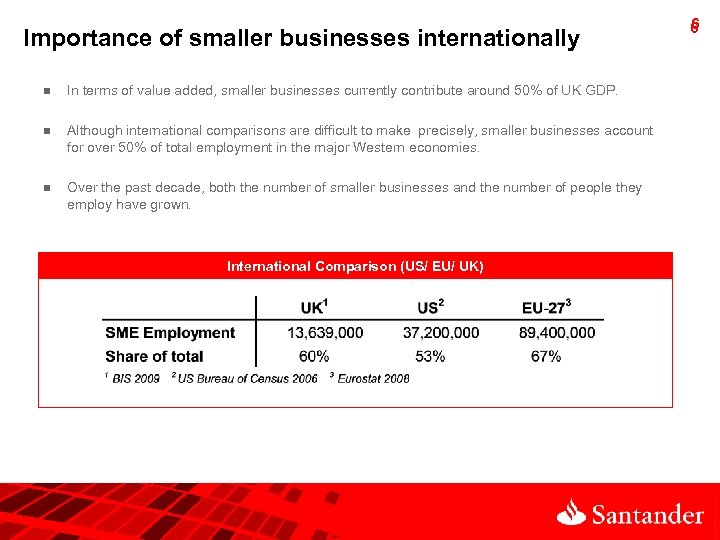 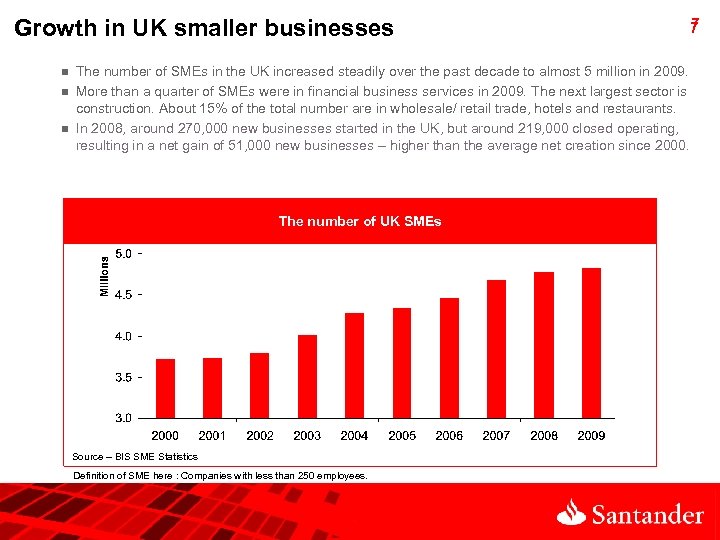 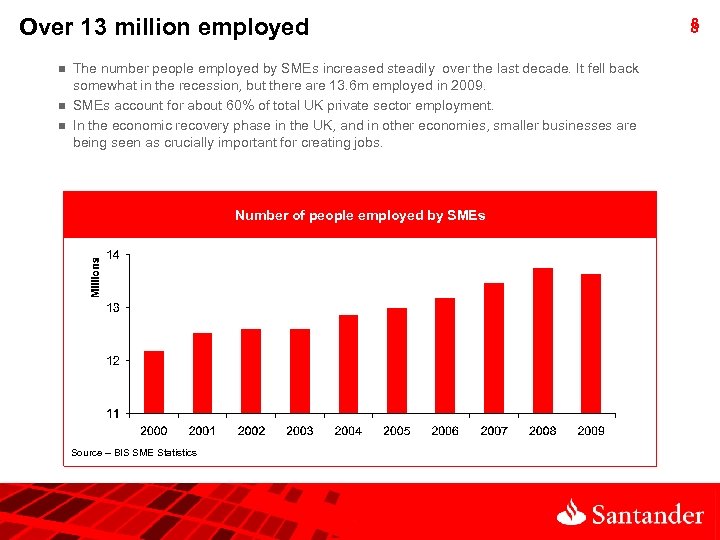 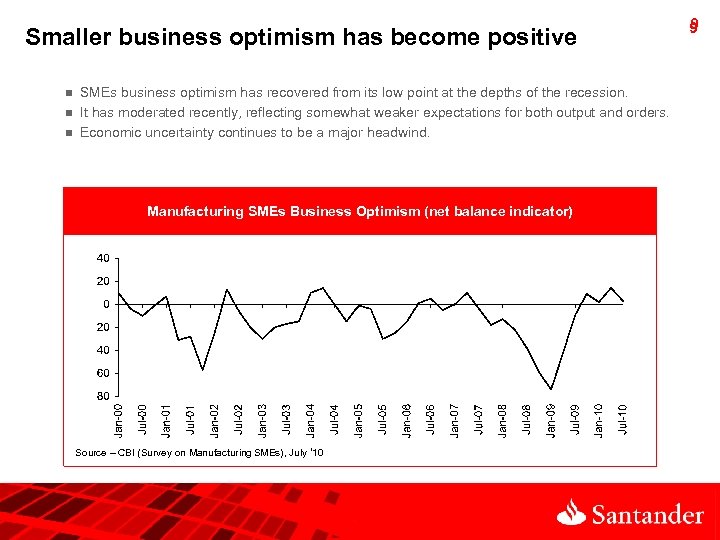 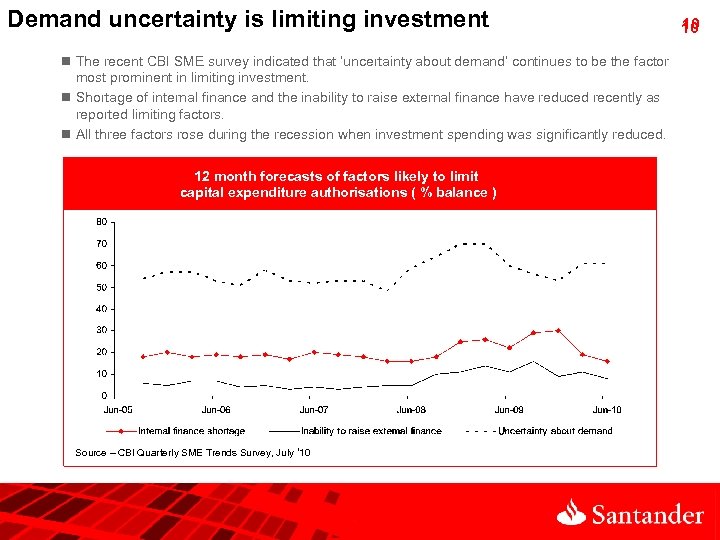 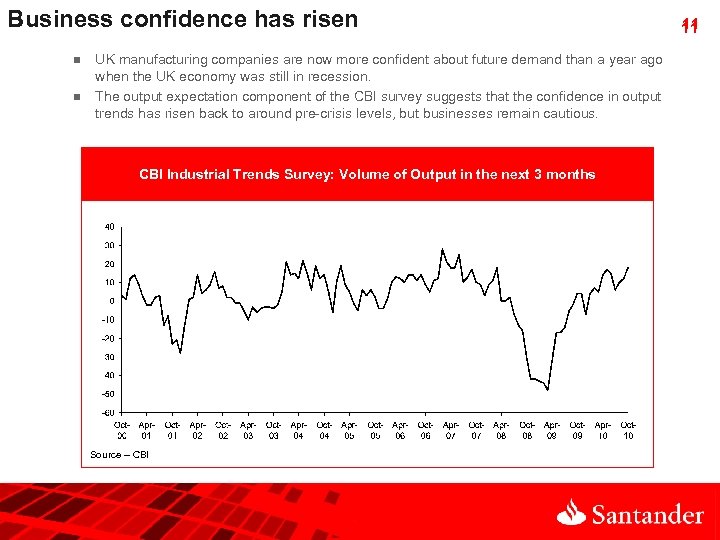 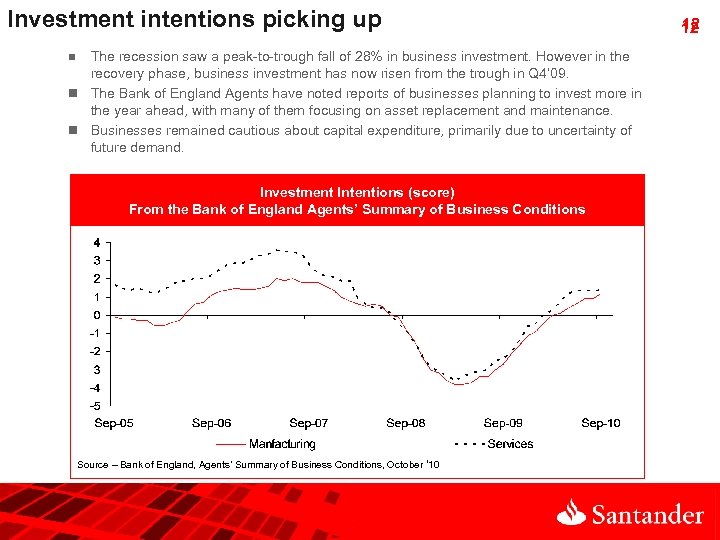 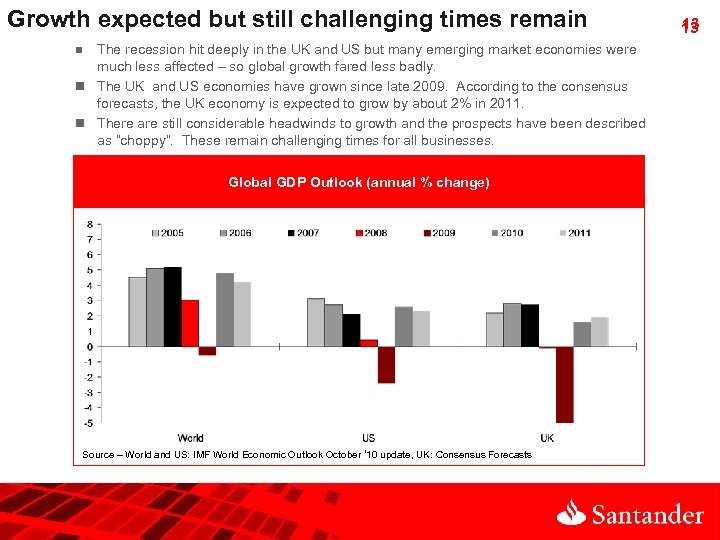 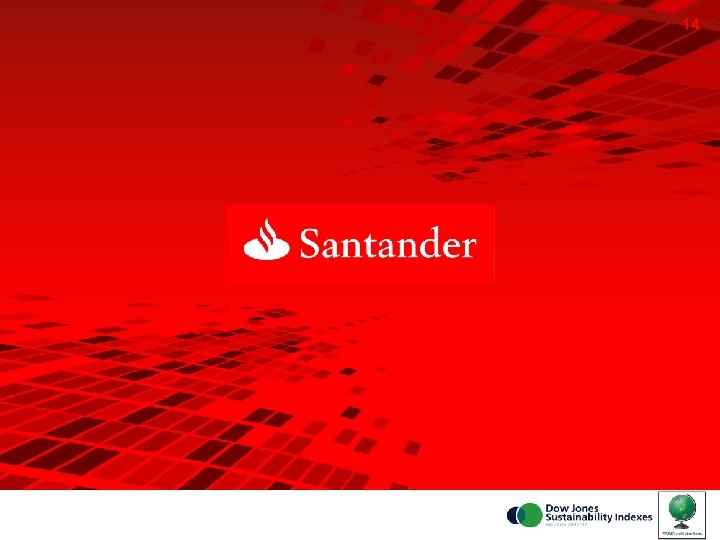 UK economic activity recovering n n n After contracting for 6 successive quarters, the UK emerged from recession in the final quarter of 2009. The initial estimate of Q 3 GDP growth was 0. 8% q/q, stronger than the consensus estimate of 0. 4% q/q. That said, it was a slowdown from the unusually strong growth in Q 2’ 10. The level of GDP is now estimated to have fallen by 6. 5% in the recession, which was deeper than in the early 1990’s, but output is 2. 8% up from its low point. Real GDP Growth (%) Source – ONS 3 3

Global growth is expected to continue, but not rapidly § § In October, the IMF revised up its economic forecasts slightly for 2010 but kept the outlook for 2011 broadly unchanged at a global level. The IMF said the recovery had proceeded better than expected, but with activity recovering at varying speeds. Global GDP Outlook (annual % change) Source – IMF World Economic Outlook October ‘ 10 update 4 4

5 5 Inflation n In the recession, the UK inflation rate has been rather elevated compared to other major economies, such as the US and the Eurozone. The UK did not see a phase of deflation on the CPI inflation measure, unlike the US and the Eurozone. RPI inflation, however, did hit negative territory, as housing costs fell sharply. Commentators have a spread of concerns ranging from rising inflation to a worry about deflation occurring. Inflation Rates (% annual) Source – ONS, BLS

Growth in UK smaller businesses n n n 7 7 The number of SMEs in the UK increased steadily over the past decade to almost 5 million in 2009. More than a quarter of SMEs were in financial business services in 2009. The next largest sector is construction. About 15% of the total number are in wholesale/ retail trade, hotels and restaurants. In 2008, around 270, 000 new businesses started in the UK, but around 219, 000 closed operating, resulting in a net gain of 51, 000 new businesses – higher than the average net creation since 2000. The number of UK SMEs Source – BIS SME Statistics Definition of SME here : Companies with less than 250 employees.

Over 13 million employed n n n The number people employed by SMEs increased steadily over the last decade. It fell back somewhat in the recession, but there are 13. 6 m employed in 2009. SMEs account for about 60% of total UK private sector employment. In the economic recovery phase in the UK, and in other economies, smaller businesses are being seen as crucially important for creating jobs. Number of people employed by SMEs Source – BIS SME Statistics 8 8

Business confidence has risen n n UK manufacturing companies are now more confident about future demand than a year ago when the UK economy was still in recession. The output expectation component of the CBI survey suggests that the confidence in output trends has risen back to around pre-crisis levels, but businesses remain cautious. CBI Industrial Trends Survey: Volume of Output in the next 3 months Source – CBI 11 11

Growth expected but still challenging times remain The recession hit deeply in the UK and US but many emerging market economies were much less affected – so global growth fared less badly. n The UK and US economies have grown since late 2009. According to the consensus forecasts, the UK economy is expected to grow by about 2% in 2011. n There are still considerable headwinds to growth and the prospects have been described as “choppy”. These remain challenging times for all businesses. n Global GDP Outlook (annual % change) Source – World and US: IMF World Economic Outlook October ‘ 10 update, UK: Consensus Forecasts 13 13