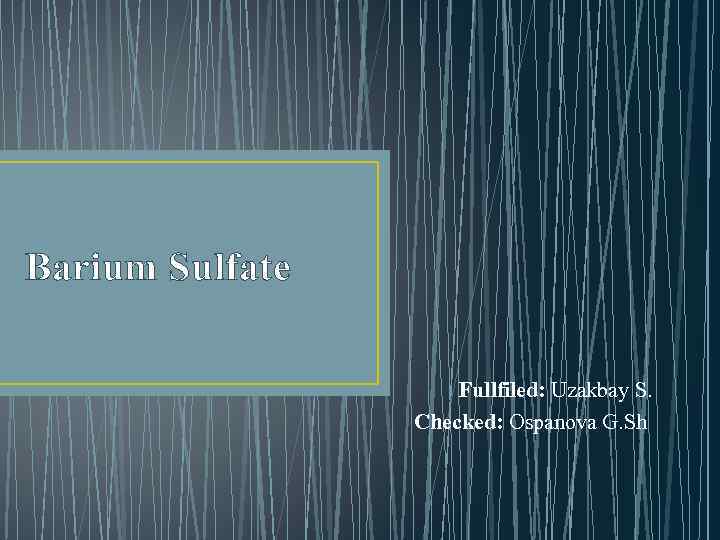 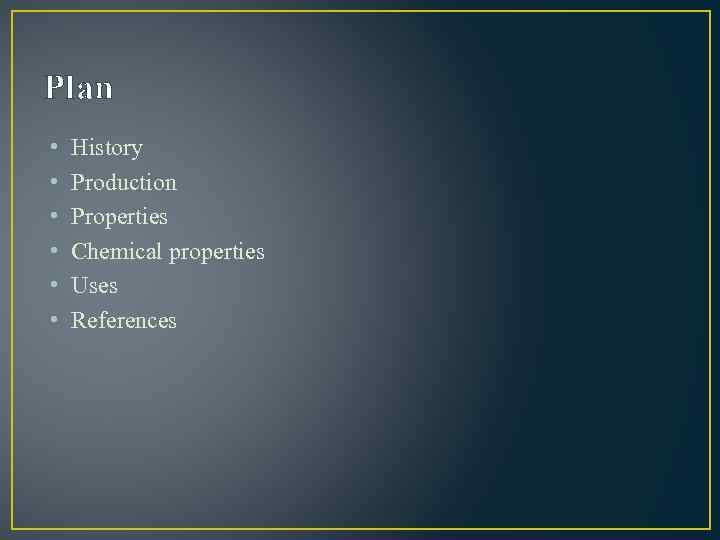 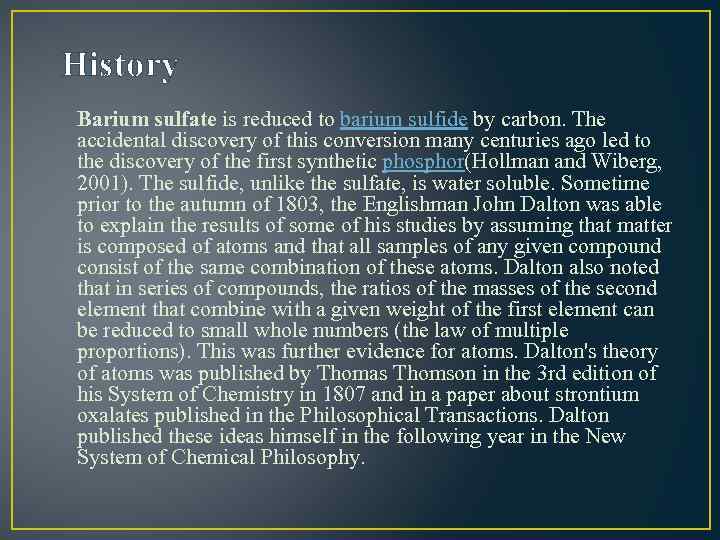 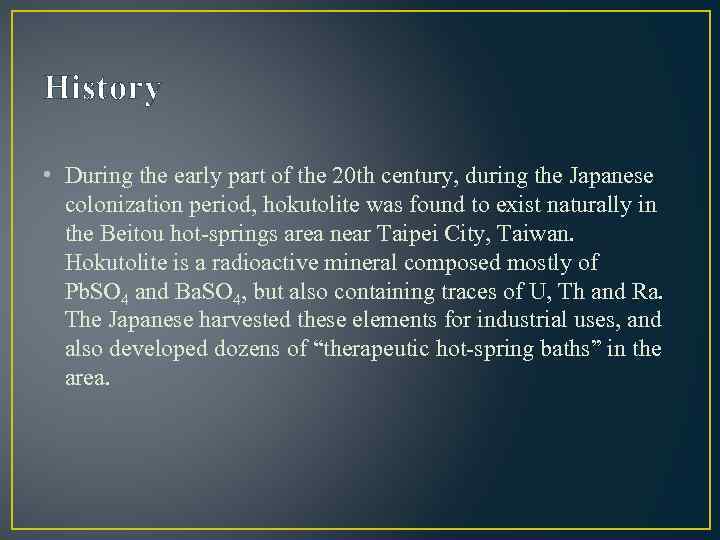 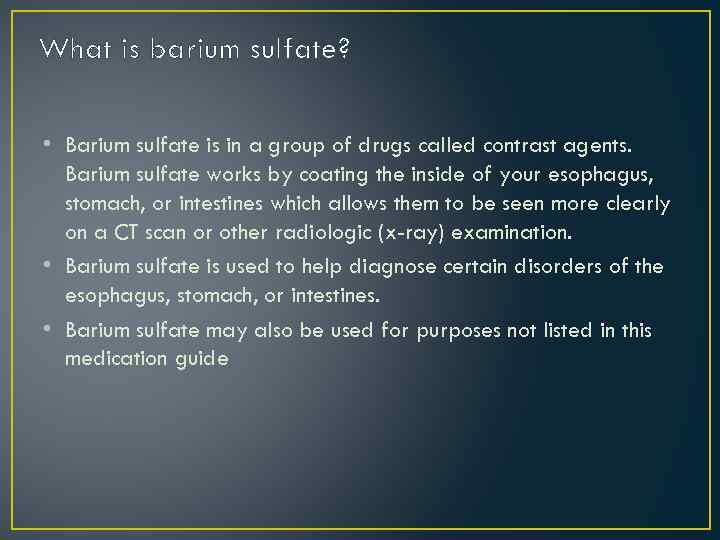 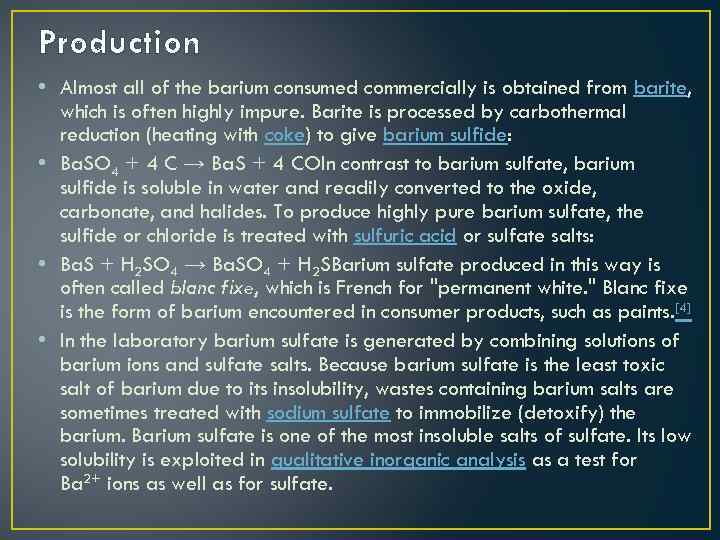 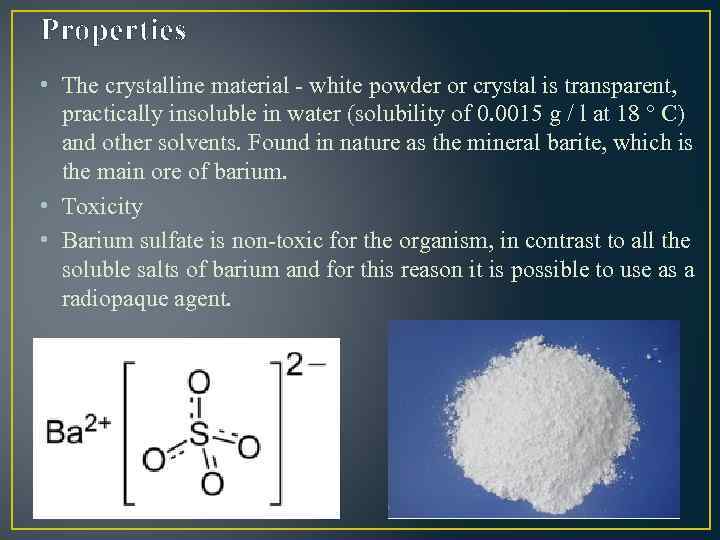 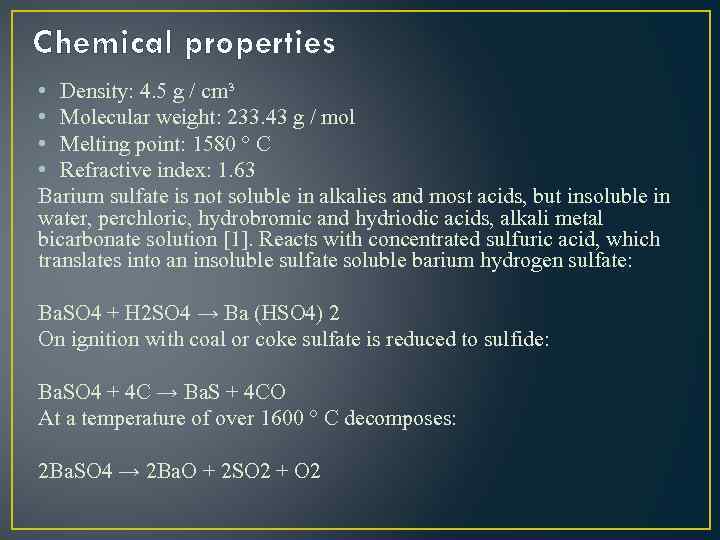 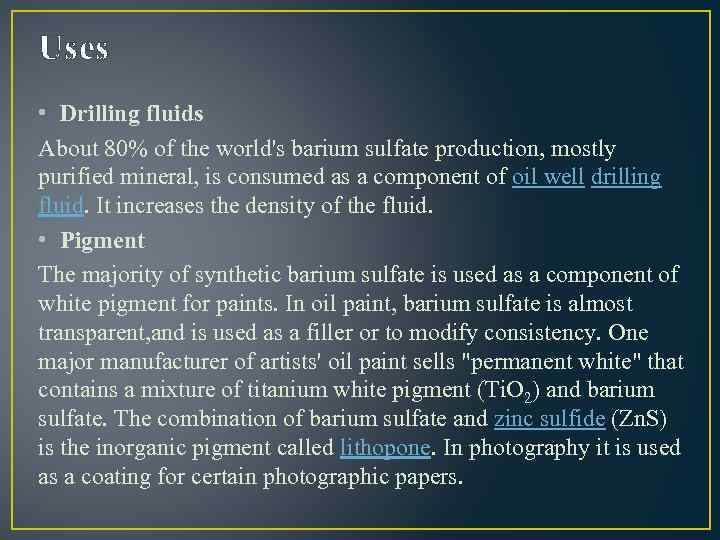 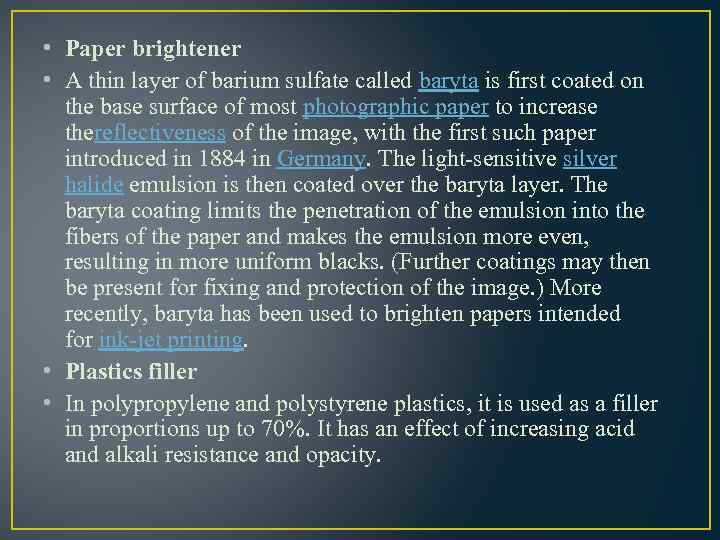 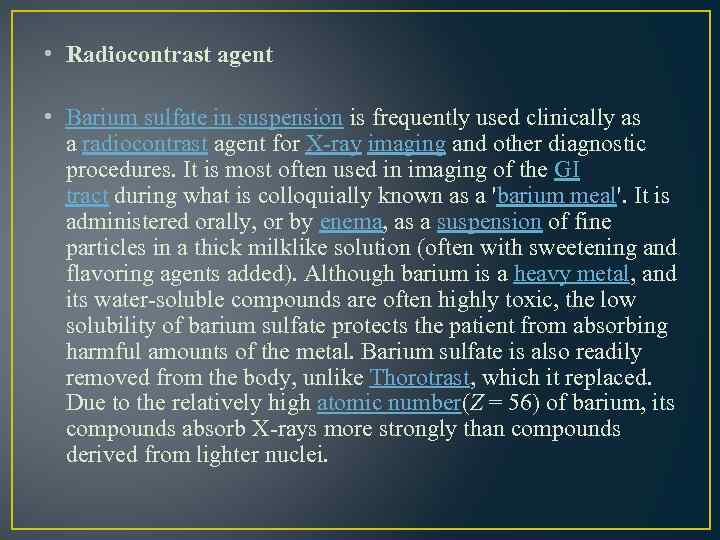 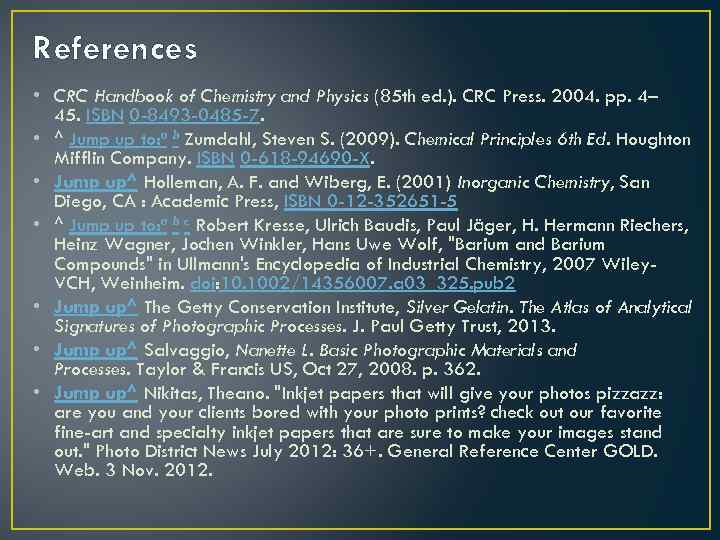 History Barium sulfate is reduced to barium sulfide by carbon. The accidental discovery of this conversion many centuries ago led to the discovery of the first synthetic phosphor(Hollman and Wiberg, 2001). The sulfide, unlike the sulfate, is water soluble. Sometime prior to the autumn of 1803, the Englishman John Dalton was able to explain the results of some of his studies by assuming that matter is composed of atoms and that all samples of any given compound consist of the same combination of these atoms. Dalton also noted that in series of compounds, the ratios of the masses of the second element that combine with a given weight of the first element can be reduced to small whole numbers (the law of multiple proportions). This was further evidence for atoms. Dalton's theory of atoms was published by Thomas Thomson in the 3 rd edition of his System of Chemistry in 1807 and in a paper about strontium oxalates published in the Philosophical Transactions. Dalton published these ideas himself in the following year in the New System of Chemical Philosophy.

History • During the early part of the 20 th century, during the Japanese colonization period, hokutolite was found to exist naturally in the Beitou hot-springs area near Taipei City, Taiwan. Hokutolite is a radioactive mineral composed mostly of Pb. SO 4 and Ba. SO 4, but also containing traces of U, Th and Ra. The Japanese harvested these elements for industrial uses, and also developed dozens of “therapeutic hot-spring baths” in the area.

Production • Almost all of the barium consumed commercially is obtained from barite, which is often highly impure. Barite is processed by carbothermal reduction (heating with coke) to give barium sulfide: • Ba. SO 4 + 4 C → Ba. S + 4 COIn contrast to barium sulfate, barium sulfide is soluble in water and readily converted to the oxide, carbonate, and halides. To produce highly pure barium sulfate, the sulfide or chloride is treated with sulfuric acid or sulfate salts: • Ba. S + H 2 SO 4 → Ba. SO 4 + H 2 SBarium sulfate produced in this way is often called blanc fixe, which is French for "permanent white. " Blanc fixe is the form of barium encountered in consumer products, such as paints. [4] • In the laboratory barium sulfate is generated by combining solutions of barium ions and sulfate salts. Because barium sulfate is the least toxic salt of barium due to its insolubility, wastes containing barium salts are sometimes treated with sodium sulfate to immobilize (detoxify) the barium. Barium sulfate is one of the most insoluble salts of sulfate. Its low solubility is exploited in qualitative inorganic analysis as a test for Ba 2+ ions as well as for sulfate.

Properties • The crystalline material - white powder or crystal is transparent, practically insoluble in water (solubility of 0. 0015 g / l at 18 ° C) and other solvents. Found in nature as the mineral barite, which is the main ore of barium. • Toxicity • Barium sulfate is non-toxic for the organism, in contrast to all the soluble salts of barium and for this reason it is possible to use as a radiopaque agent.

• Paper brightener • A thin layer of barium sulfate called baryta is first coated on the base surface of most photographic paper to increase thereflectiveness of the image, with the first such paper introduced in 1884 in Germany. The light-sensitive silver halide emulsion is then coated over the baryta layer. The baryta coating limits the penetration of the emulsion into the fibers of the paper and makes the emulsion more even, resulting in more uniform blacks. (Further coatings may then be present for fixing and protection of the image. ) More recently, baryta has been used to brighten papers intended for ink-jet printing. • Plastics filler • In polypropylene and polystyrene plastics, it is used as a filler in proportions up to 70%. It has an effect of increasing acid and alkali resistance and opacity.

• Radiocontrast agent • Barium sulfate in suspension is frequently used clinically as a radiocontrast agent for X-ray imaging and other diagnostic procedures. It is most often used in imaging of the GI tract during what is colloquially known as a 'barium meal'. It is administered orally, or by enema, as a suspension of fine particles in a thick milklike solution (often with sweetening and flavoring agents added). Although barium is a heavy metal, and its water-soluble compounds are often highly toxic, the low solubility of barium sulfate protects the patient from absorbing harmful amounts of the metal. Barium sulfate is also readily removed from the body, unlike Thorotrast, which it replaced. Due to the relatively high atomic number(Z = 56) of barium, its compounds absorb X-rays more strongly than compounds derived from lighter nuclei.

Pre-Departure Orientation The topics to be covered