Bank of Credit and Commerce International BCCI A 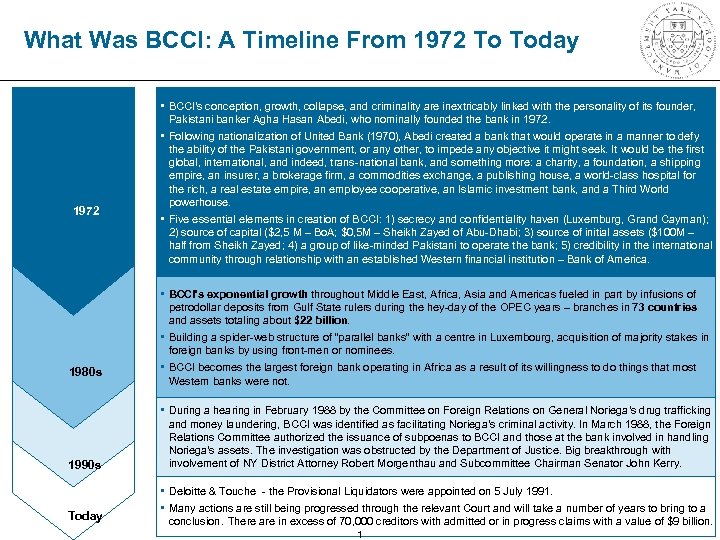 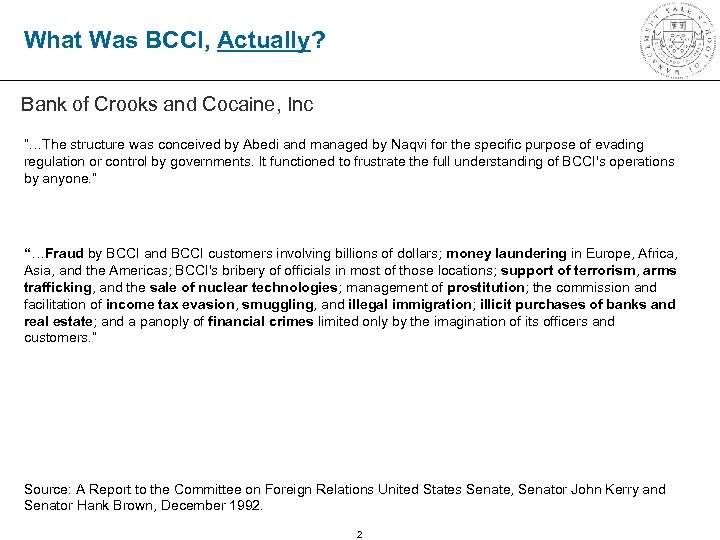 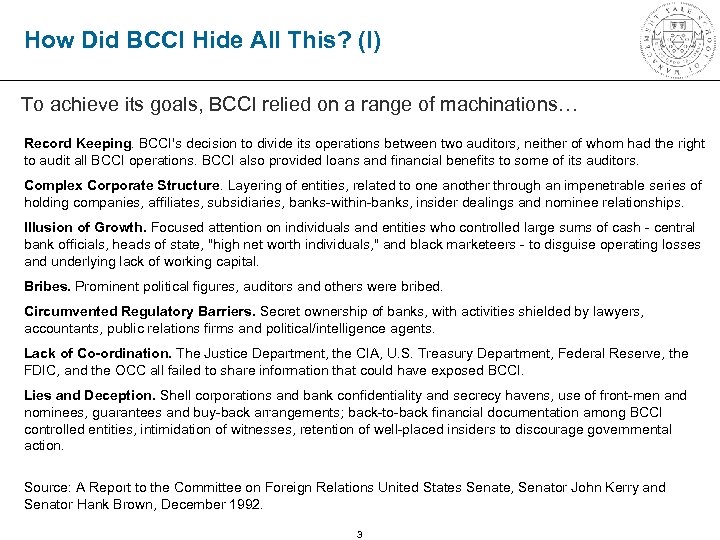 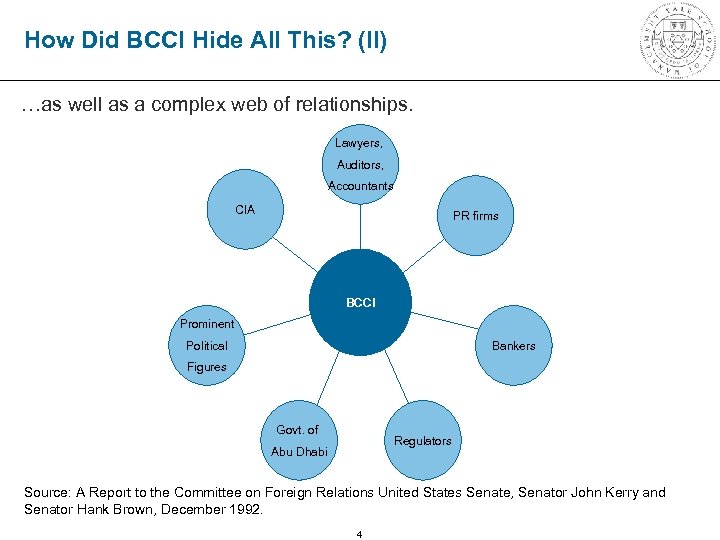 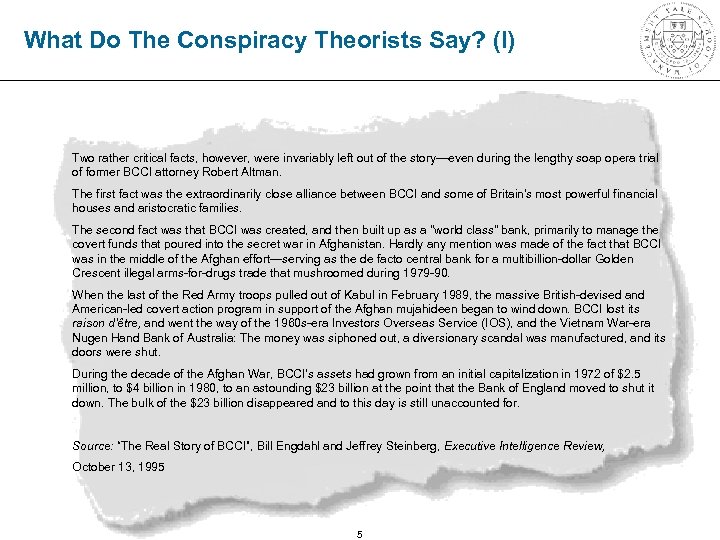 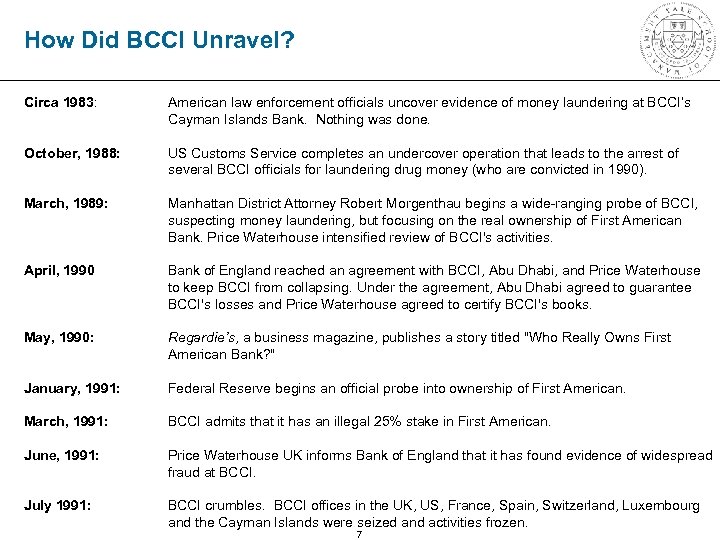 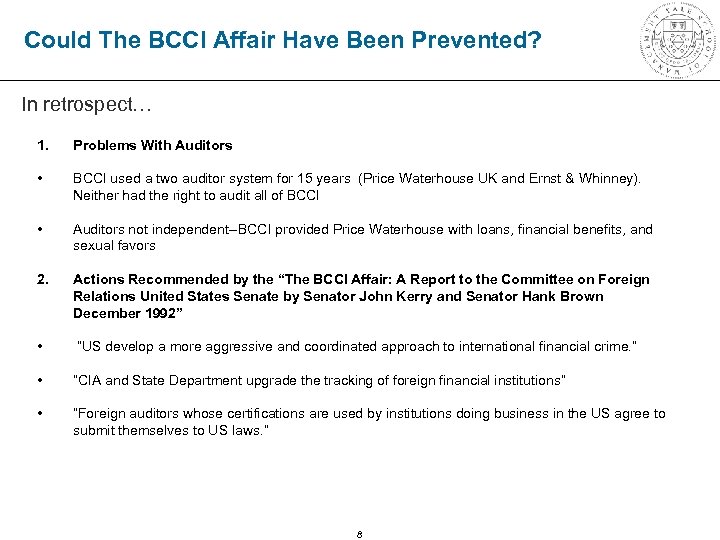 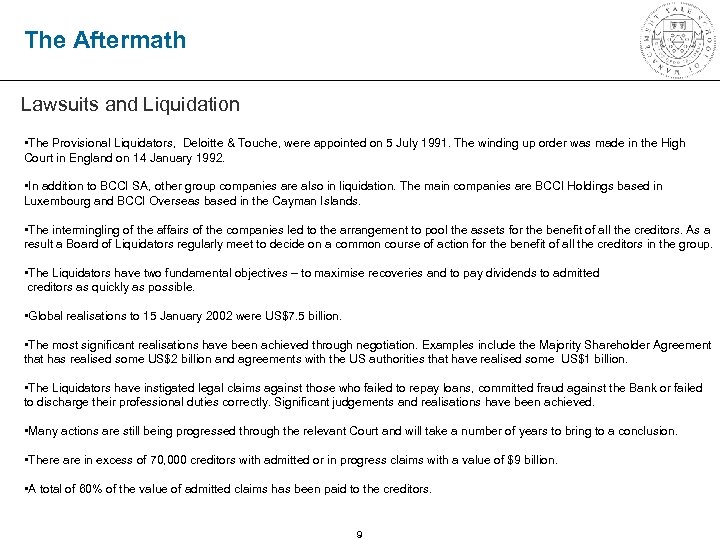 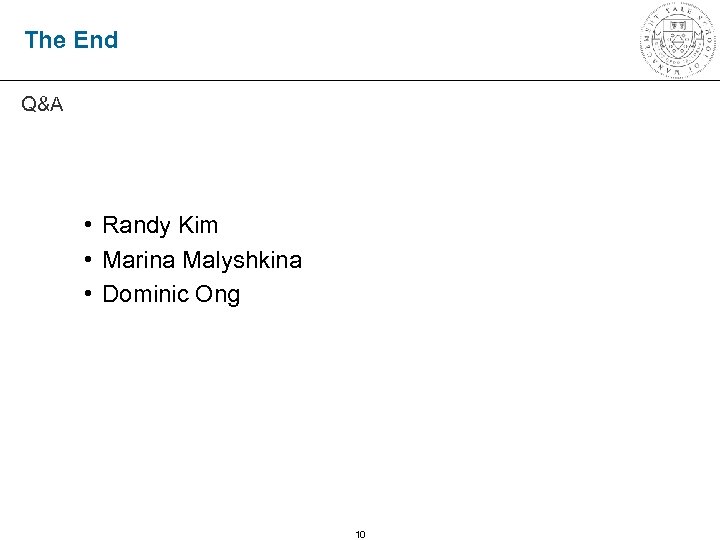 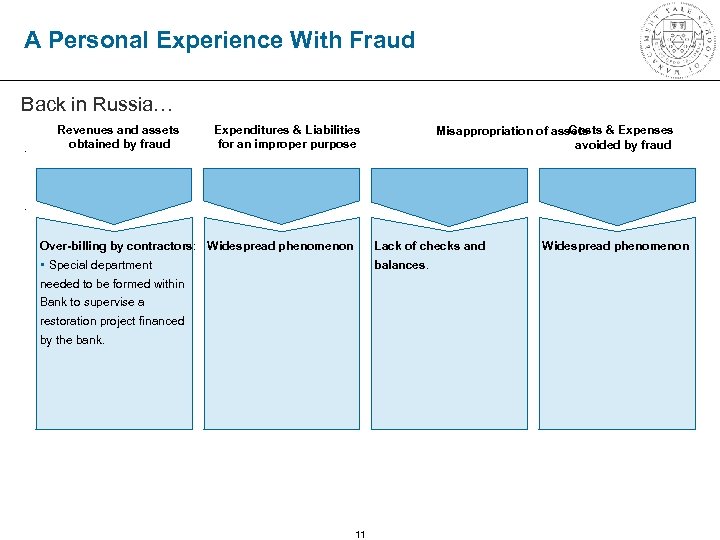 Скачать презентацию Bank of Credit and Commerce International BCCI A

What Was BCCI: A Timeline From 1972 To Today 1972 1980 s • BCCI's conception, growth, collapse, and criminality are inextricably linked with the personality of its founder, Pakistani banker Agha Hasan Abedi, who nominally founded the bank in 1972. • Following nationalization of United Bank (1970), Abedi created a bank that would operate in a manner to defy the ability of the Pakistani government, or any other, to impede any objective it might seek. It would be the first global, international, and indeed, trans-national bank, and something more: a charity, a foundation, a shipping empire, an insurer, a brokerage firm, a commodities exchange, a publishing house, a world-class hospital for the rich, a real estate empire, an employee cooperative, an Islamic investment bank, and a Third World powerhouse. • Five essential elements in creation of BCCI: 1) secrecy and confidentiality haven (Luxemburg, Grand Cayman); 2) source of capital ($2, 5 M – Bo. A; $0, 5 M – Sheikh Zayed of Abu-Dhabi; 3) source of initial assets ($100 M – half from Sheikh Zayed; 4) a group of like-minded Pakistani to operate the bank; 5) credibility in the international community through relationship with an established Western financial institution – Bank of America. • BCCI's exponential growth throughout Middle East, Africa, Asia and Americas fueled in part by infusions of petrodollar deposits from Gulf State rulers during the hey-day of the OPEC years – branches in 73 countries and assets totaling about $22 billion. • Building a spider-web structure of “parallel banks” with a centre in Luxembourg, acquisition of majority stakes in foreign banks by using front-men or nominees. • BCCI becomes the largest foreign bank operating in Africa as a result of its willingness to do things that most Western banks were not. 1990 s • During a hearing in February 1988 by the Committee on Foreign Relations on General Noriega's drug trafficking and money laundering, BCCI was identified as facilitating Noriega's criminal activity. In March 1988, the Foreign Relations Committee authorized the issuance of subpoenas to BCCI and those at the bank involved in handling Noriega's assets. The investigation was obstructed by the Department of Justice. Big breakthrough with involvement of NY District Attorney Robert Morgenthau and Subcommittee Chairman Senator John Kerry. Today • Deloitte & Touche - the Provisional Liquidators were appointed on 5 July 1991. • Many actions are still being progressed through the relevant Court and will take a number of years to bring to a conclusion. There are in excess of 70, 000 creditors with admitted or in progress claims with a value of $9 billion. 1

What Was BCCI, Actually? Bank of Crooks and Cocaine, Inc “…The structure was conceived by Abedi and managed by Naqvi for the specific purpose of evading regulation or control by governments. It functioned to frustrate the full understanding of BCCI's operations by anyone. ” “…Fraud by BCCI and BCCI customers involving billions of dollars; money laundering in Europe, Africa, Asia, and the Americas; BCCI's bribery of officials in most of those locations; support of terrorism, arms trafficking, and the sale of nuclear technologies; management of prostitution; the commission and facilitation of income tax evasion, smuggling, and illegal immigration; illicit purchases of banks and real estate; and a panoply of financial crimes limited only by the imagination of its officers and customers. ” Source: A Report to the Committee on Foreign Relations United States Senate, Senator John Kerry and Senator Hank Brown, December 1992. 2

How Did BCCI Hide All This? (I) To achieve its goals, BCCI relied on a range of machinations… Record Keeping. BCCI's decision to divide its operations between two auditors, neither of whom had the right to audit all BCCI operations. BCCI also provided loans and financial benefits to some of its auditors. Complex Corporate Structure. Layering of entities, related to one another through an impenetrable series of holding companies, affiliates, subsidiaries, banks-within-banks, insider dealings and nominee relationships. Illusion of Growth. Focused attention on individuals and entities who controlled large sums of cash - central bank officials, heads of state, "high net worth individuals, " and black marketeers - to disguise operating losses and underlying lack of working capital. Bribes. Prominent political figures, auditors and others were bribed. Circumvented Regulatory Barriers. Secret ownership of banks, with activities shielded by lawyers, accountants, public relations firms and political/intelligence agents. Lack of Co-ordination. The Justice Department, the CIA, U. S. Treasury Department, Federal Reserve, the FDIC, and the OCC all failed to share information that could have exposed BCCI. Lies and Deception. Shell corporations and bank confidentiality and secrecy havens, use of front-men and nominees, guarantees and buy-back arrangements; back-to-back financial documentation among BCCI controlled entities, intimidation of witnesses, retention of well-placed insiders to discourage governmental action. Source: A Report to the Committee on Foreign Relations United States Senate, Senator John Kerry and Senator Hank Brown, December 1992. 3

What Do The Conspiracy Theorists Say? (I) Two rather critical facts, however, were invariably left out of the story—even during the lengthy soap opera trial of former BCCI attorney Robert Altman. The first fact was the extraordinarily close alliance between BCCI and some of Britain's most powerful financial houses and aristocratic families. The second fact was that BCCI was created, and then built up as a "world class" bank, primarily to manage the covert funds that poured into the secret war in Afghanistan. Hardly any mention was made of the fact that BCCI was in the middle of the Afghan effort—serving as the de facto central bank for a multibillion-dollar Golden Crescent illegal arms-for-drugs trade that mushroomed during 1979 -90. When the last of the Red Army troops pulled out of Kabul in February 1989, the massive British-devised and American-led covert action program in support of the Afghan mujahideen began to wind down. BCCI lost its raison d'être, and went the way of the 1960 s-era Investors Overseas Service (IOS), and the Vietnam War-era Nugen Hand Bank of Australia: The money was siphoned out, a diversionary scandal was manufactured, and its doors were shut. During the decade of the Afghan War, BCCI's assets had grown from an initial capitalization in 1972 of $2. 5 million, to $4 billion in 1980, to an astounding $23 billion at the point that the Bank of England moved to shut it down. The bulk of the $23 billion disappeared and to this day is still unaccounted for. Source: “The Real Story of BCCI”, Bill Engdahl and Jeffrey Steinberg, Executive Intelligence Review, October 13, 1995 5

What Do The Conspiracy Theorists Say? (II) Former Senate investigator Jack Blum summed up the BCCI case in 1991 testimony before a congressional committee: "This bank was a product of the Afghan War and people very close to the mujahideen have said that many Pakistani military officials who were deeply involved in assisting and supporting the Afghan rebel movement were stealing our foreign assistance money and using BCCI to hide the money they stole; to market American weapons that were to be delivered that they stole; and to market and manage funds that came from the selling of heroin that was apparently engineered by one of the mujahideen groups. " Source: “The Real Story of BCCI”, Bill Engdahl and Jeffrey Steinberg, Executive Intelligence Review, October 13, 1995 6

How Did BCCI Unravel? Circa 1983: American law enforcement officials uncover evidence of money laundering at BCCI’s Cayman Islands Bank. Nothing was done. October, 1988: US Customs Service completes an undercover operation that leads to the arrest of several BCCI officials for laundering drug money (who are convicted in 1990). March, 1989: Manhattan District Attorney Robert Morgenthau begins a wide-ranging probe of BCCI, suspecting money laundering, but focusing on the real ownership of First American Bank. Price Waterhouse intensified review of BCCI's activities. April, 1990 Bank of England reached an agreement with BCCI, Abu Dhabi, and Price Waterhouse to keep BCCI from collapsing. Under the agreement, Abu Dhabi agreed to guarantee BCCI's losses and Price Waterhouse agreed to certify BCCI's books. May, 1990: Regardie’s, a business magazine, publishes a story titled "Who Really Owns First American Bank? " January, 1991: Federal Reserve begins an official probe into ownership of First American. March, 1991: BCCI admits that it has an illegal 25% stake in First American. June, 1991: Price Waterhouse UK informs Bank of England that it has found evidence of widespread fraud at BCCI. July 1991: BCCI crumbles. BCCI offices in the UK, US, France, Spain, Switzerland, Luxembourg and the Cayman Islands were seized and activities frozen. 7

Could The BCCI Affair Have Been Prevented? In retrospect… 1. Problems With Auditors • BCCI used a two auditor system for 15 years (Price Waterhouse UK and Ernst & Whinney). Neither had the right to audit all of BCCI • Auditors not independent--BCCI provided Price Waterhouse with loans, financial benefits, and sexual favors 2. Actions Recommended by the “The BCCI Affair: A Report to the Committee on Foreign Relations United States Senate by Senator John Kerry and Senator Hank Brown December 1992” • “US develop a more aggressive and coordinated approach to international financial crime. ” • “CIA and State Department upgrade the tracking of foreign financial institutions” • “Foreign auditors whose certifications are used by institutions doing business in the US agree to submit themselves to US laws. ” 8

The Aftermath Lawsuits and Liquidation • The Provisional Liquidators, Deloitte & Touche, were appointed on 5 July 1991. The winding up order was made in the High Court in England on 14 January 1992. • In addition to BCCI SA, other group companies are also in liquidation. The main companies are BCCI Holdings based in Luxembourg and BCCI Overseas based in the Cayman Islands. • The intermingling of the affairs of the companies led to the arrangement to pool the assets for the benefit of all the creditors. As a result a Board of Liquidators regularly meet to decide on a common course of action for the benefit of all the creditors in the group. • The Liquidators have two fundamental objectives – to maximise recoveries and to pay dividends to admitted creditors as quickly as possible. • Global realisations to 15 January 2002 were US$7. 5 billion. • The most significant realisations have been achieved through negotiation. Examples include the Majority Shareholder Agreement that has realised some US$2 billion and agreements with the US authorities that have realised some US$1 billion. • The Liquidators have instigated legal claims against those who failed to repay loans, committed fraud against the Bank or failed to discharge their professional duties correctly. Significant judgements and realisations have been achieved. • Many actions are still being progressed through the relevant Court and will take a number of years to bring to a conclusion. • There are in excess of 70, 000 creditors with admitted or in progress claims with a value of $9 billion. • A total of 60% of the value of admitted claims has been paid to the creditors. 9

A Personal Experience With Fraud Back in Russia…. Revenues and assets obtained by fraud Expenditures & Liabilities for an improper purpose Costs Misappropriation of assets & Expenses avoided by fraud . Over-billing by contractors: Widespread phenomenon Lack of checks and • Special department needed to be formed within Bank to supervise a restoration project financed by the bank. balances. 11 Widespread phenomenon