Auto Biography Self and Other autobiography about self 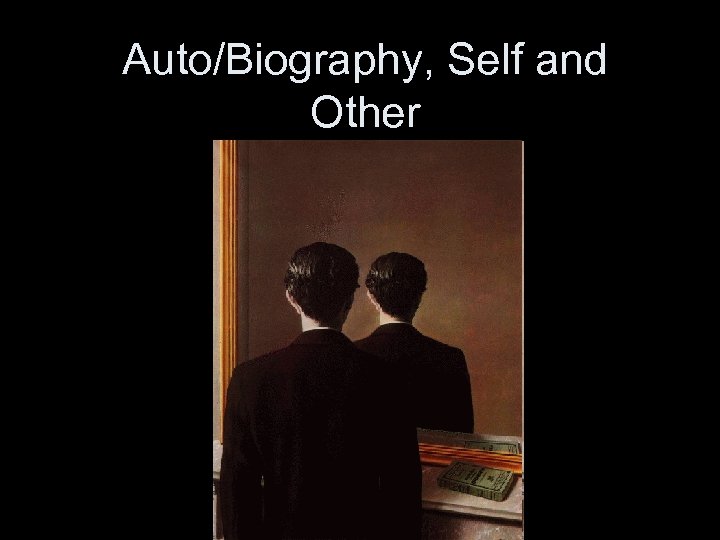 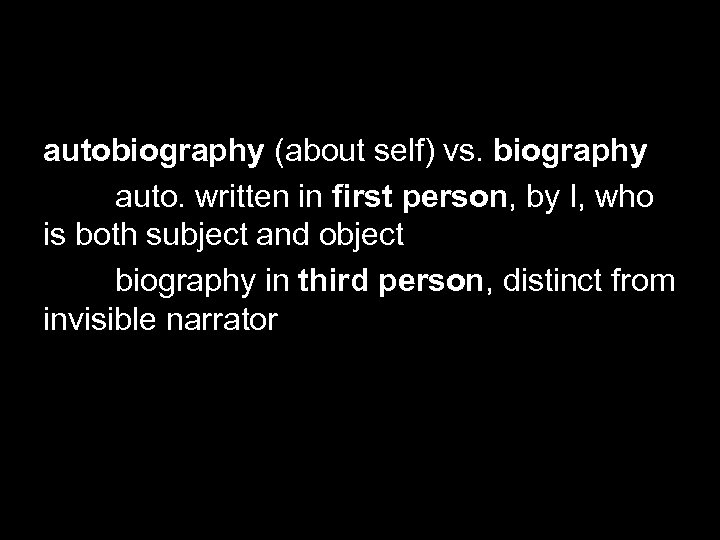 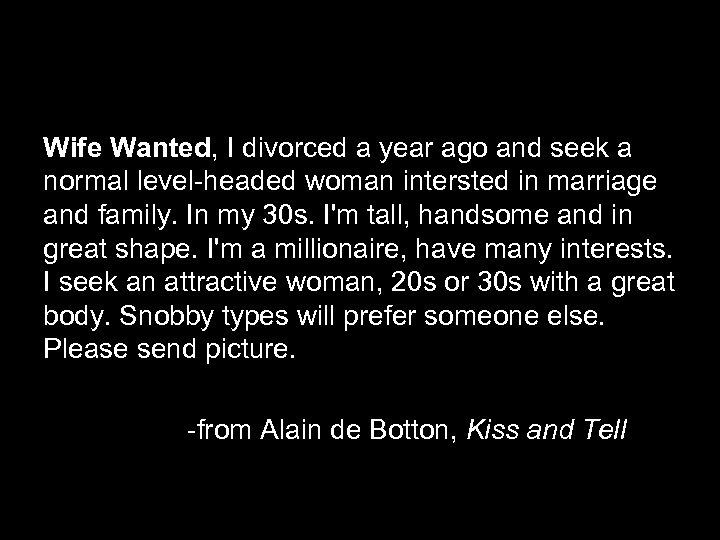 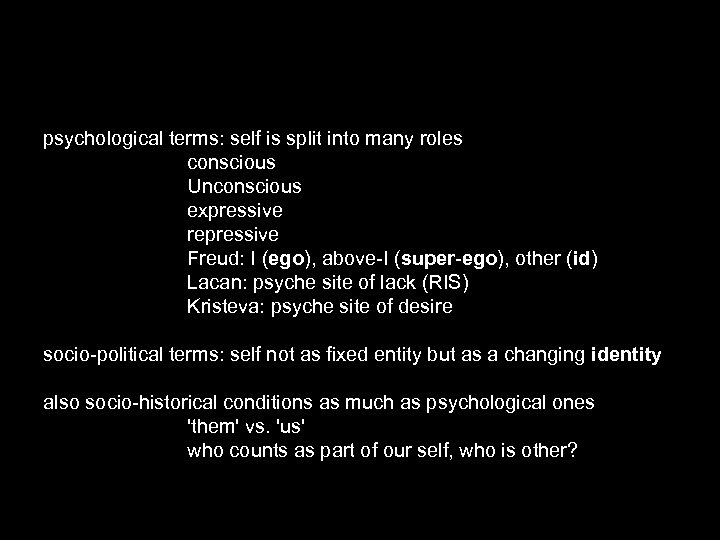 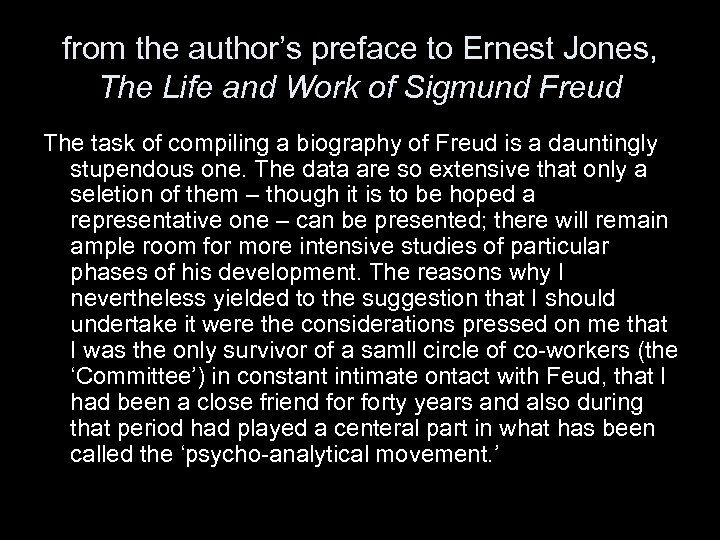 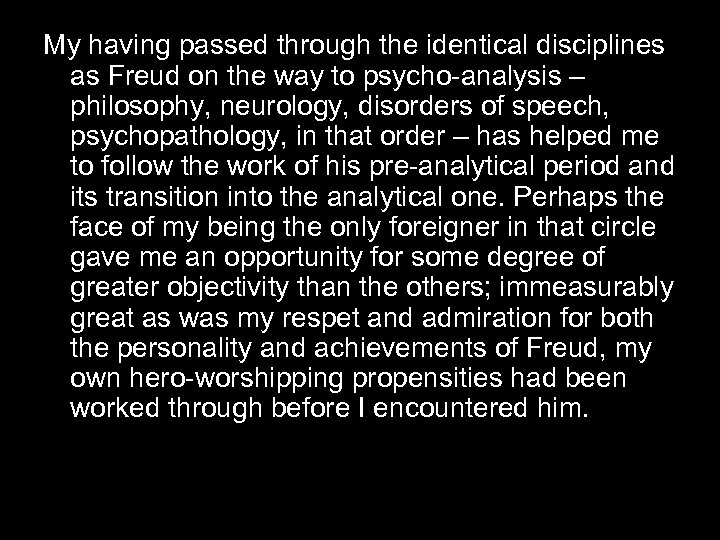 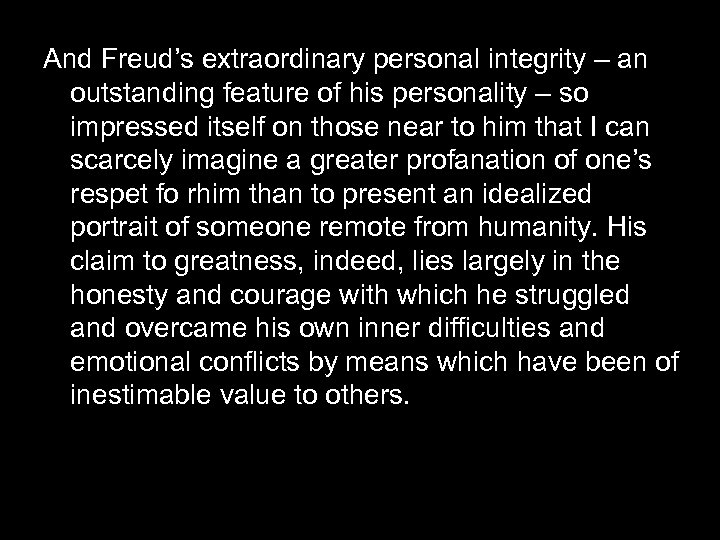 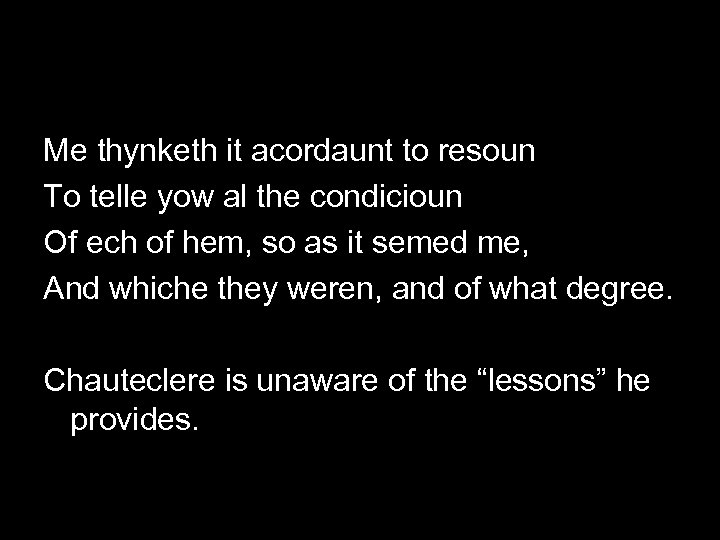 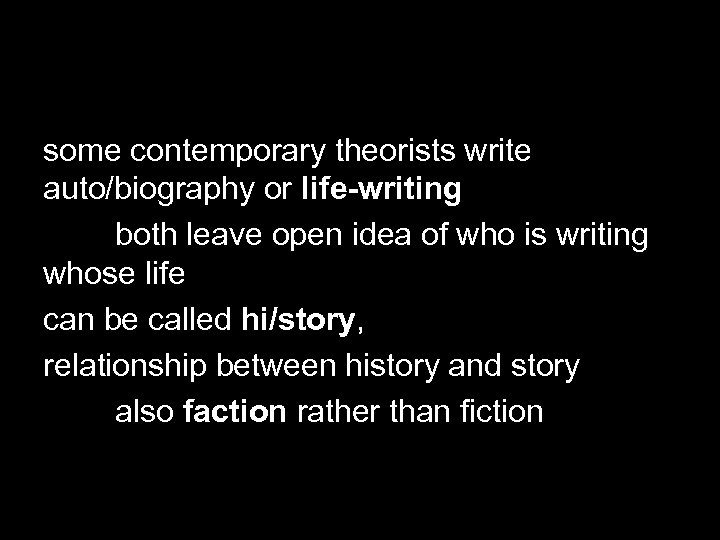 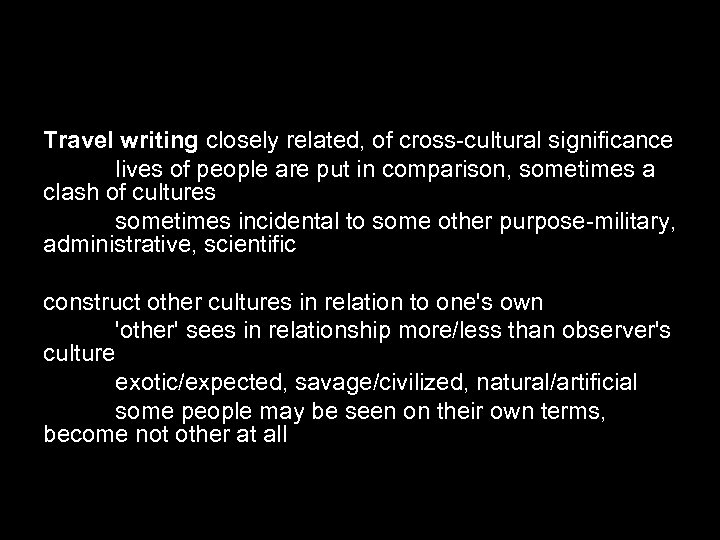 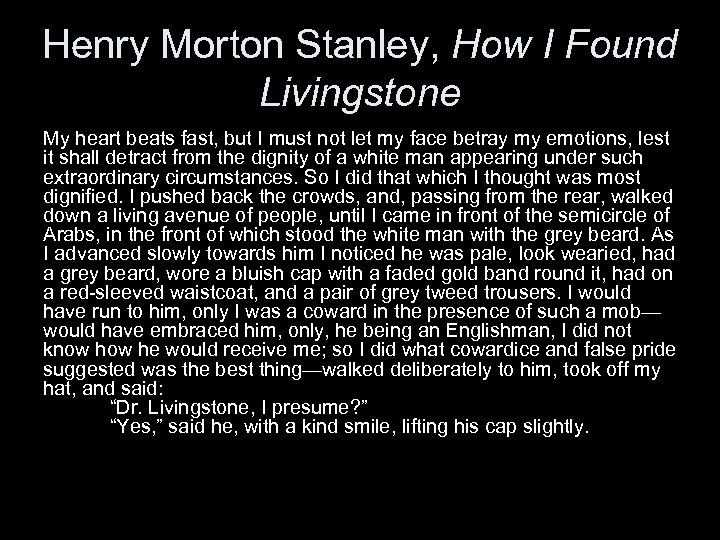 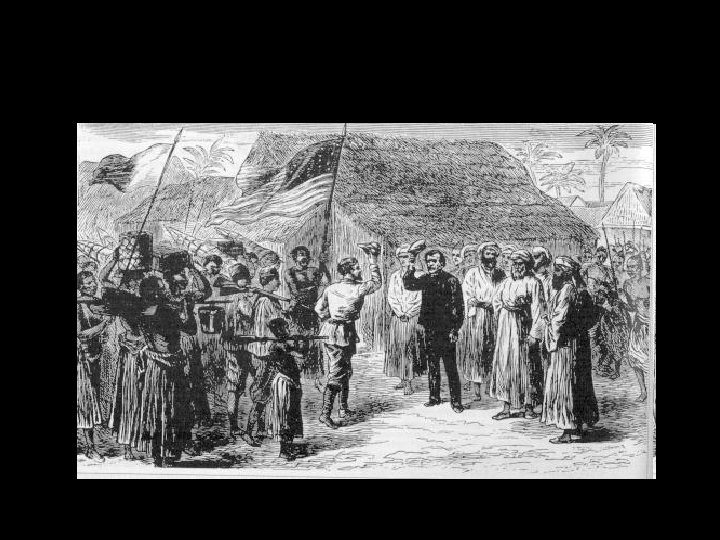 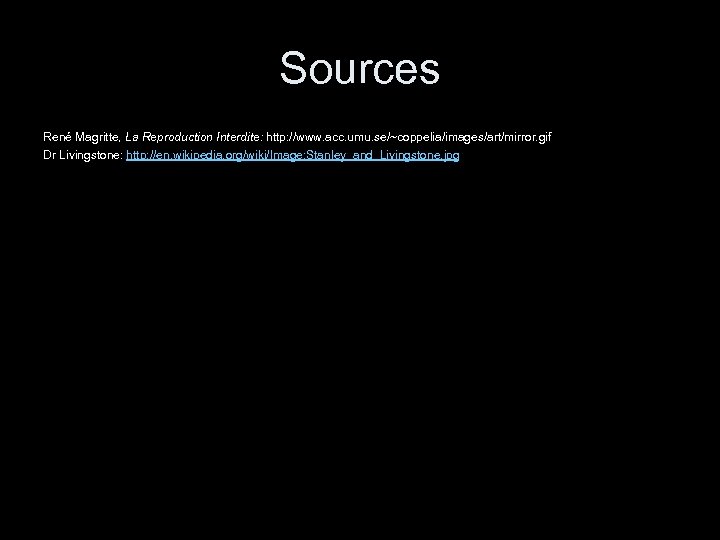 Скачать презентацию Auto Biography Self and Other autobiography about self

Auto/Biography, Self and Other

autobiography (about self) vs. biography auto. written in first person, by I, who is both subject and object biography in third person, distinct from invisible narrator

Wife Wanted, I divorced a year ago and seek a normal level-headed woman intersted in marriage and family. In my 30 s. I'm tall, handsome and in great shape. I'm a millionaire, have many interests. I seek an attractive woman, 20 s or 30 s with a great body. Snobby types will prefer someone else. Please send picture. -from Alain de Botton, Kiss and Tell

psychological terms: self is split into many roles conscious Unconscious expressive repressive Freud: I (ego), above-I (super-ego), other (id) Lacan: psyche site of lack (RIS) Kristeva: psyche site of desire socio-political terms: self not as fixed entity but as a changing identity also socio-historical conditions as much as psychological ones 'them' vs. 'us' who counts as part of our self, who is other?

from the author’s preface to Ernest Jones, The Life and Work of Sigmund Freud The task of compiling a biography of Freud is a dauntingly stupendous one. The data are so extensive that only a seletion of them – though it is to be hoped a representative one – can be presented; there will remain ample room for more intensive studies of particular phases of his development. The reasons why I nevertheless yielded to the suggestion that I should undertake it were the considerations pressed on me that I was the only survivor of a samll circle of co-workers (the ‘Committee’) in constant intimate ontact with Feud, that I had been a close friend forty years and also during that period had played a centeral part in what has been called the ‘psycho-analytical movement. ’

My having passed through the identical disciplines as Freud on the way to psycho-analysis – philosophy, neurology, disorders of speech, psychopathology, in that order – has helped me to follow the work of his pre-analytical period and its transition into the analytical one. Perhaps the face of my being the only foreigner in that circle gave me an opportunity for some degree of greater objectivity than the others; immeasurably great as was my respet and admiration for both the personality and achievements of Freud, my own hero-worshipping propensities had been worked through before I encountered him.

And Freud’s extraordinary personal integrity – an outstanding feature of his personality – so impressed itself on those near to him that I can scarcely imagine a greater profanation of one’s respet fo rhim than to present an idealized portrait of someone remote from humanity. His claim to greatness, indeed, lies largely in the honesty and courage with which he struggled and overcame his own inner difficulties and emotional conflicts by means which have been of inestimable value to others.

Me thynketh it acordaunt to resoun To telle yow al the condicioun Of ech of hem, so as it semed me, And whiche they weren, and of what degree. Chauteclere is unaware of the “lessons” he provides.

some contemporary theorists write auto/biography or life-writing both leave open idea of who is writing whose life can be called hi/story, relationship between history and story also faction rather than fiction

Travel writing closely related, of cross-cultural significance lives of people are put in comparison, sometimes a clash of cultures sometimes incidental to some other purpose-military, administrative, scientific construct other cultures in relation to one's own 'other' sees in relationship more/less than observer's culture exotic/expected, savage/civilized, natural/artificial some people may be seen on their own terms, become not other at all

Henry Morton Stanley, How I Found Livingstone My heart beats fast, but I must not let my face betray my emotions, lest it shall detract from the dignity of a white man appearing under such extraordinary circumstances. So I did that which I thought was most dignified. I pushed back the crowds, and, passing from the rear, walked down a living avenue of people, until I came in front of the semicircle of Arabs, in the front of which stood the white man with the grey beard. As I advanced slowly towards him I noticed he was pale, look wearied, had a grey beard, wore a bluish cap with a faded gold band round it, had on a red-sleeved waistcoat, and a pair of grey tweed trousers. I would have run to him, only I was a coward in the presence of such a mob— would have embraced him, only, he being an Englishman, I did not know he would receive me; so I did what cowardice and false pride suggested was the best thing—walked deliberately to him, took off my hat, and said: “Dr. Livingstone, I presume? ” “Yes, ” said he, with a kind smile, lifting his cap slightly.

Lecture 3 The Social Self “ NO