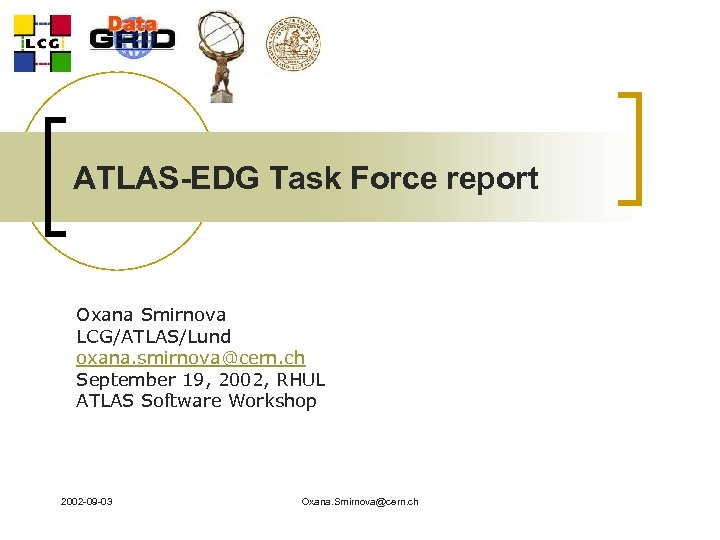 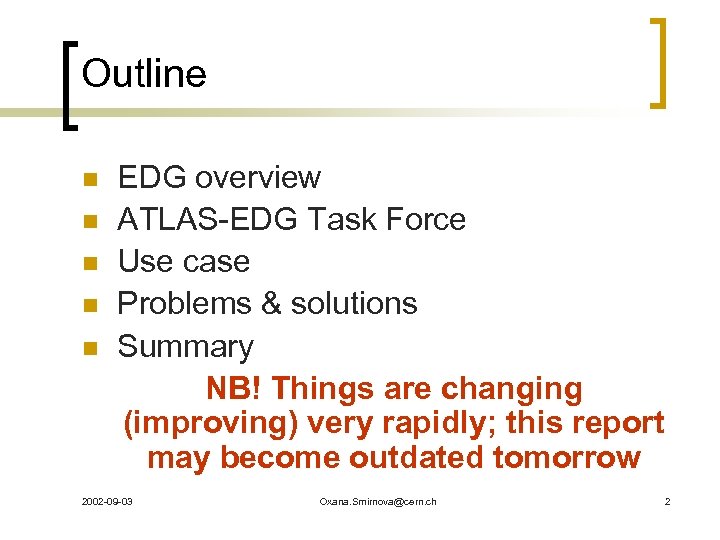 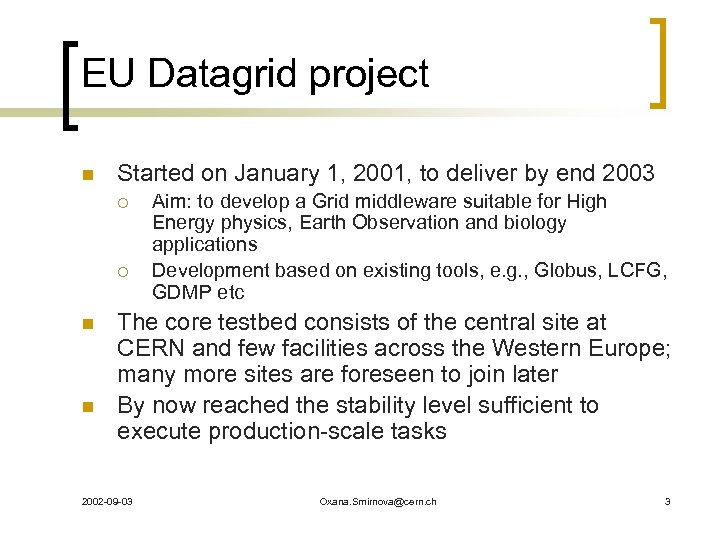 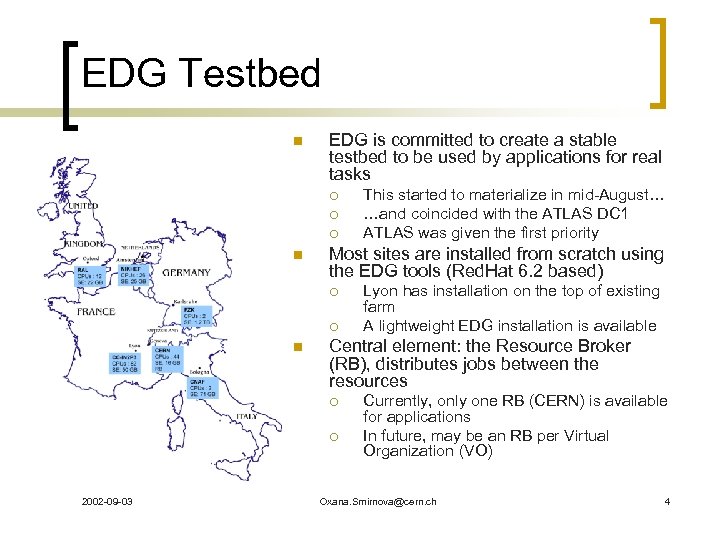 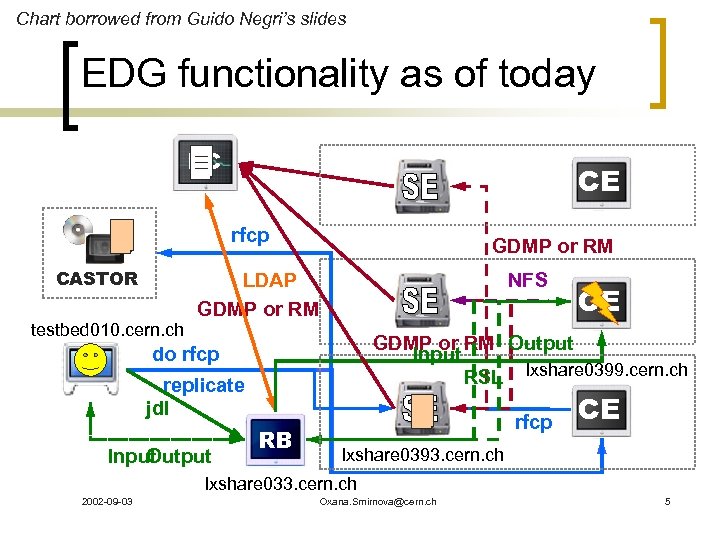 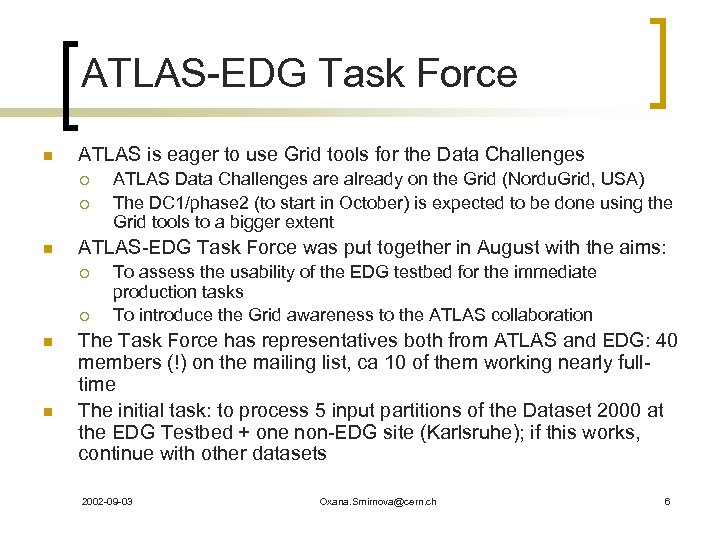 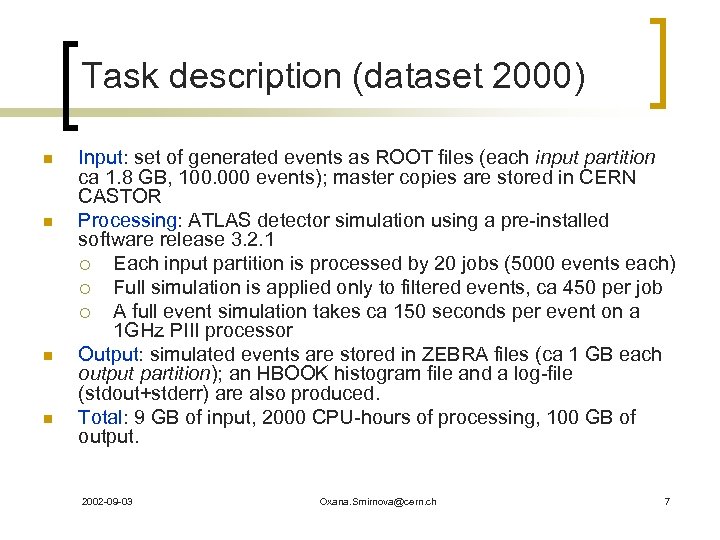 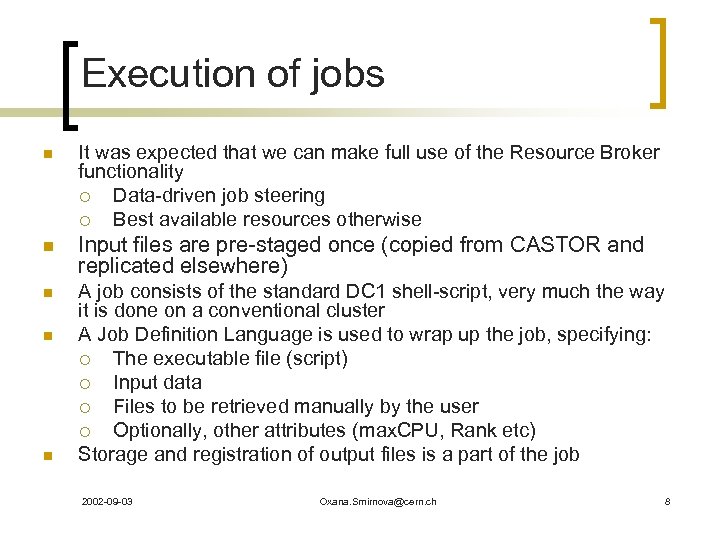 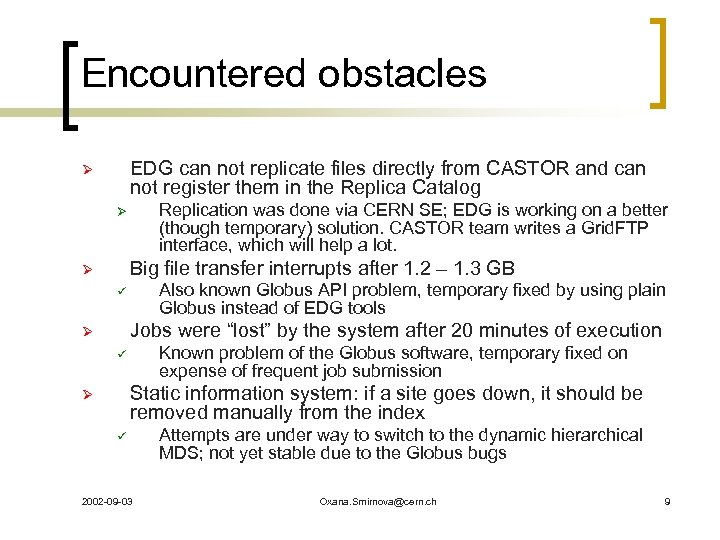 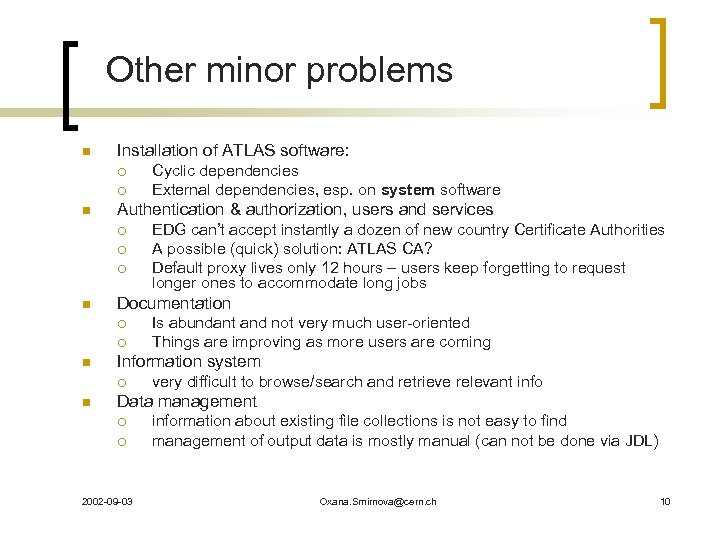 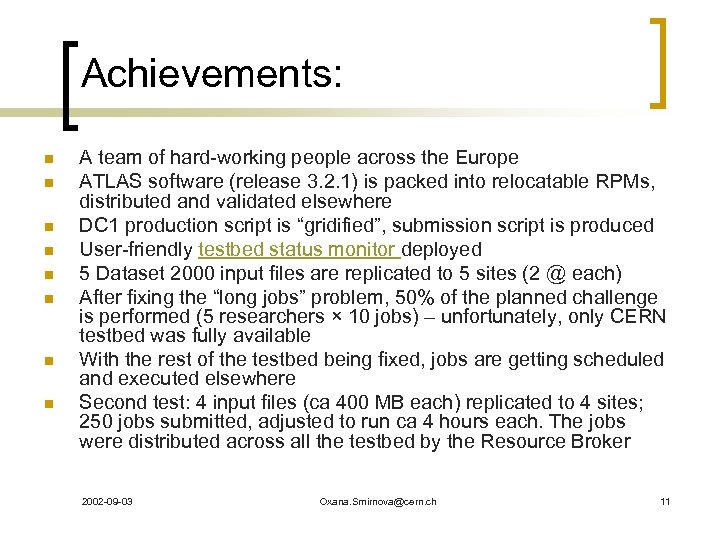 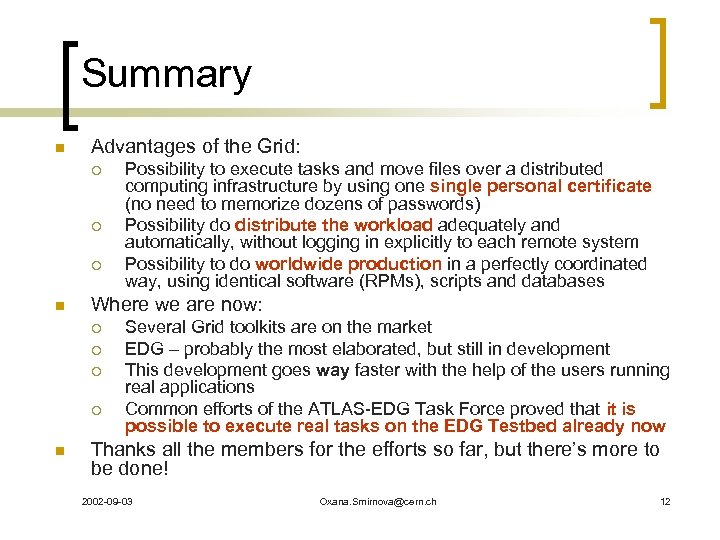 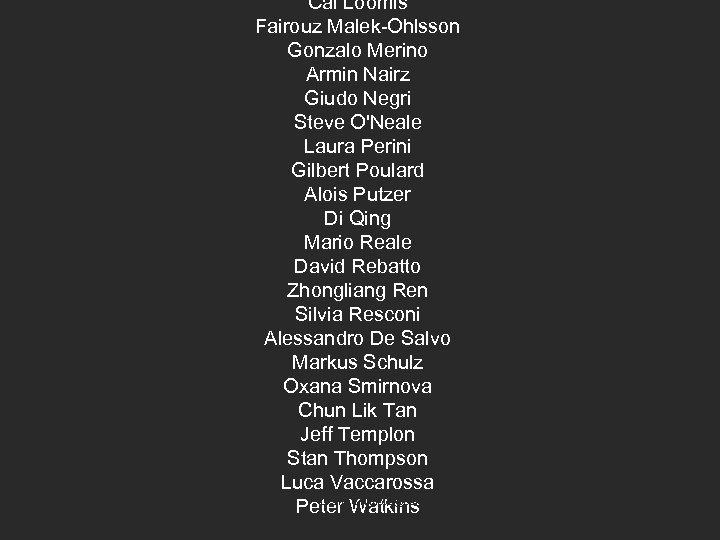 EDG Testbed n EDG is committed to create a stable testbed to be used by applications for real tasks ¡ ¡ ¡ n Most sites are installed from scratch using the EDG tools (Red. Hat 6. 2 based) ¡ ¡ n Lyon has installation on the top of existing farm A lightweight EDG installation is available Central element: the Resource Broker (RB), distributes jobs between the resources ¡ ¡ 2002 -09 -03 This started to materialize in mid-August… …and coincided with the ATLAS DC 1 ATLAS was given the first priority Currently, only one RB (CERN) is available for applications In future, may be an RB per Virtual Organization (VO) Oxana. [email protected] ch 4

ATLAS-EDG Task Force n ATLAS is eager to use Grid tools for the Data Challenges ¡ ¡ n ATLAS-EDG Task Force was put together in August with the aims: ¡ ¡ n n ATLAS Data Challenges are already on the Grid (Nordu. Grid, USA) The DC 1/phase 2 (to start in October) is expected to be done using the Grid tools to a bigger extent To assess the usability of the EDG testbed for the immediate production tasks To introduce the Grid awareness to the ATLAS collaboration The Task Force has representatives both from ATLAS and EDG: 40 members (!) on the mailing list, ca 10 of them working nearly fulltime The initial task: to process 5 input partitions of the Dataset 2000 at the EDG Testbed + one non-EDG site (Karlsruhe); if this works, continue with other datasets 2002 -09 -03 Oxana. [email protected] ch 6

Execution of jobs n It was expected that we can make full use of the Resource Broker functionality ¡ Data-driven job steering ¡ Best available resources otherwise n Input files are pre-staged once (copied from CASTOR and replicated elsewhere) n A job consists of the standard DC 1 shell-script, very much the way it is done on a conventional cluster A Job Definition Language is used to wrap up the job, specifying: ¡ The executable file (script) ¡ Input data ¡ Files to be retrieved manually by the user ¡ Optionally, other attributes (max. CPU, Rank etc) Storage and registration of output files is a part of the job n n 2002 -09 -03 Oxana. [email protected] ch 8

Encountered obstacles EDG can not replicate files directly from CASTOR and can not register them in the Replica Catalog Ø Replication was done via CERN SE; EDG is working on a better (though temporary) solution. CASTOR team writes a Grid. FTP interface, which will help a lot. Ø Big file transfer interrupts after 1. 2 – 1. 3 GB Ø Also known Globus API problem, temporary fixed by using plain Globus instead of EDG tools ü Jobs were “lost” by the system after 20 minutes of execution Ø Known problem of the Globus software, temporary fixed on expense of frequent job submission ü Static information system: if a site goes down, it should be removed manually from the index Ø ü 2002 -09 -03 Attempts are under way to switch to the dynamic hierarchical MDS; not yet stable due to the Globus bugs Oxana. [email protected] ch 9

Achievements: n n n n A team of hard-working people across the Europe ATLAS software (release 3. 2. 1) is packed into relocatable RPMs, distributed and validated elsewhere DC 1 production script is “gridified”, submission script is produced User-friendly testbed status monitor deployed 5 Dataset 2000 input files are replicated to 5 sites (2 @ each) After fixing the “long jobs” problem, 50% of the planned challenge is performed (5 researchers × 10 jobs) – unfortunately, only CERN testbed was fully available With the rest of the testbed being fixed, jobs are getting scheduled and executed elsewhere Second test: 4 input files (ca 400 MB each) replicated to 4 sites; 250 jobs submitted, adjusted to run ca 4 hours each. The jobs were distributed across all the testbed by the Resource Broker 2002 -09 -03 Oxana. [email protected] ch 11

Summary n Advantages of the Grid: ¡ ¡ ¡ n Where we are now: ¡ ¡ n Possibility to execute tasks and move files over a distributed computing infrastructure by using one single personal certificate (no need to memorize dozens of passwords) Possibility do distribute the workload adequately and automatically, without logging in explicitly to each remote system Possibility to do worldwide production in a perfectly coordinated way, using identical software (RPMs), scripts and databases Several Grid toolkits are on the market EDG – probably the most elaborated, but still in development This development goes way faster with the help of the users running real applications Common efforts of the ATLAS-EDG Task Force proved that it is possible to execute real tasks on the EDG Testbed already now Thanks all the members for the efforts so far, but there’s more to be done! 2002 -09 -03 Oxana. [email protected] ch 12