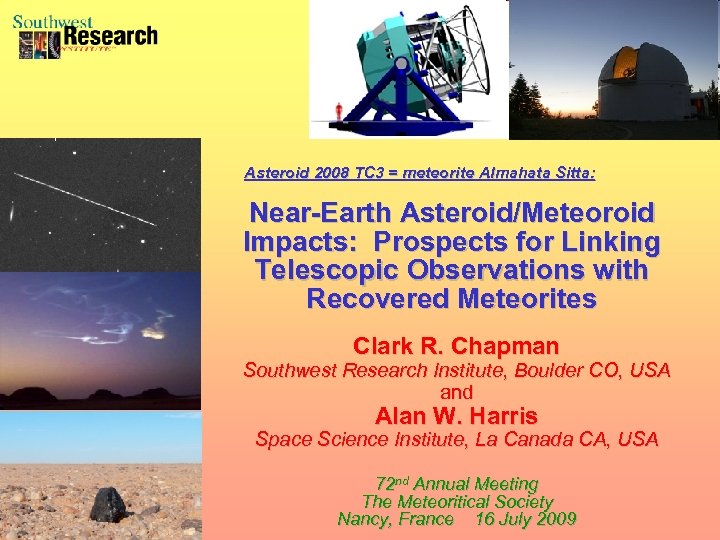 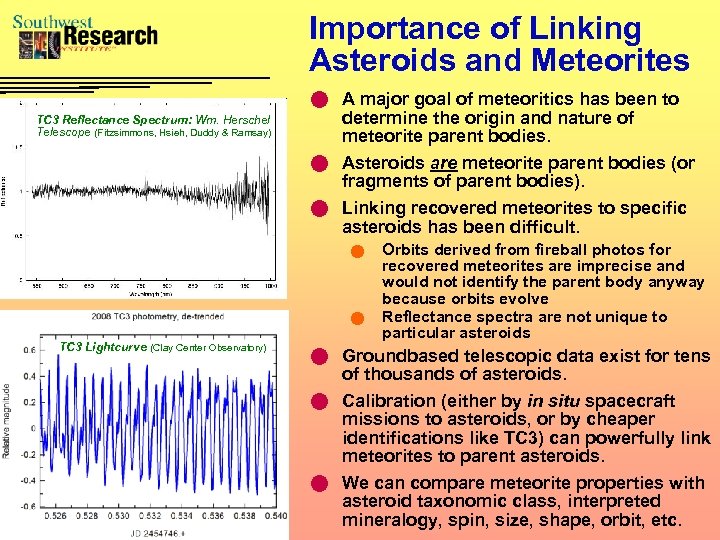 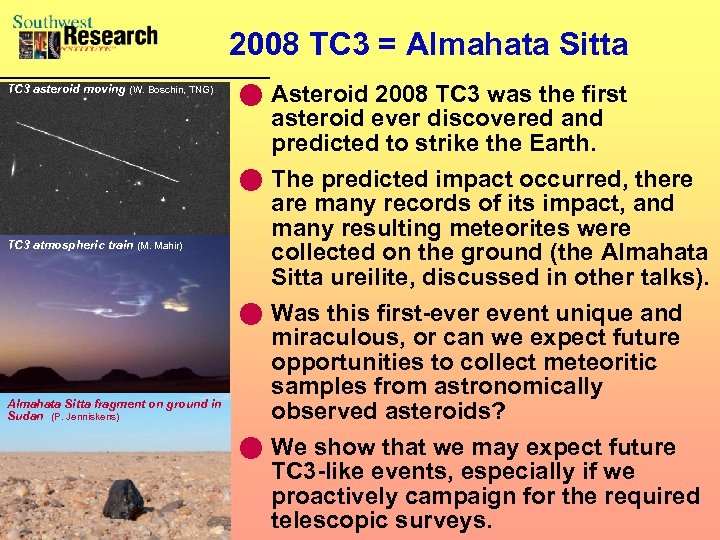 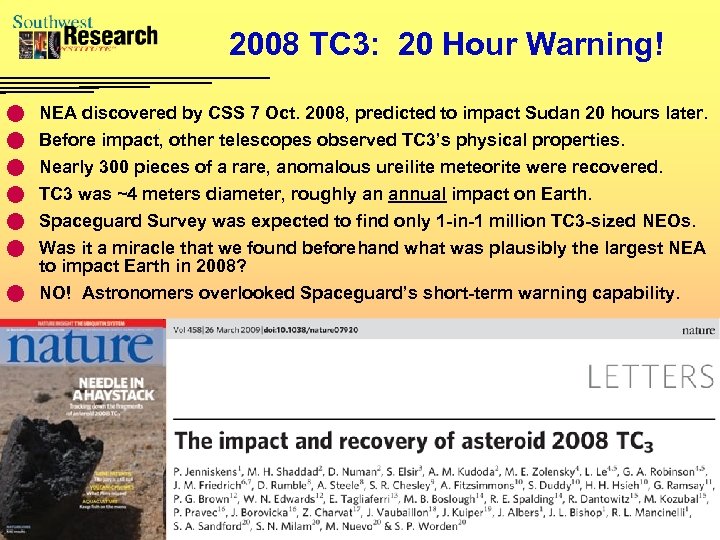 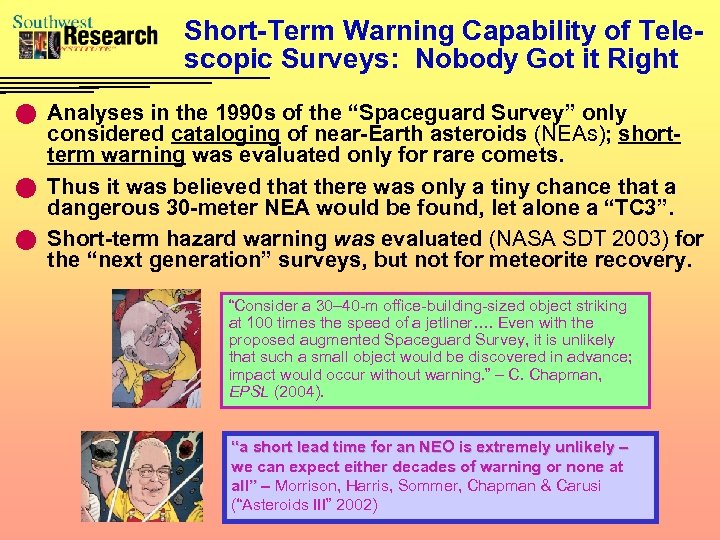 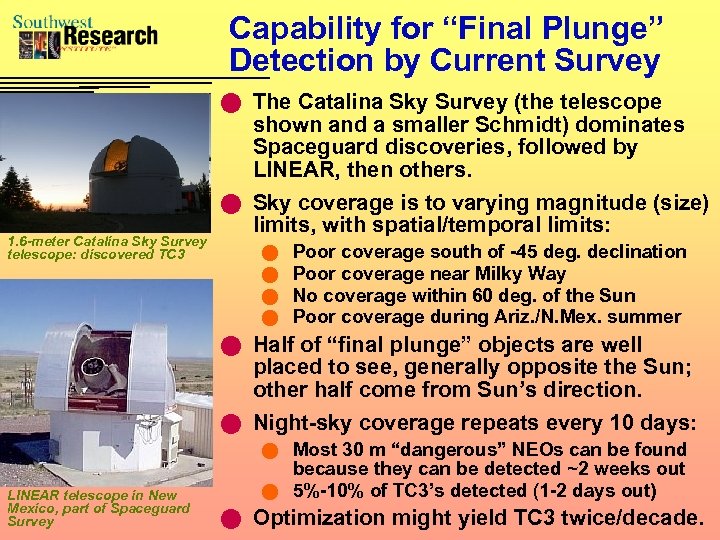 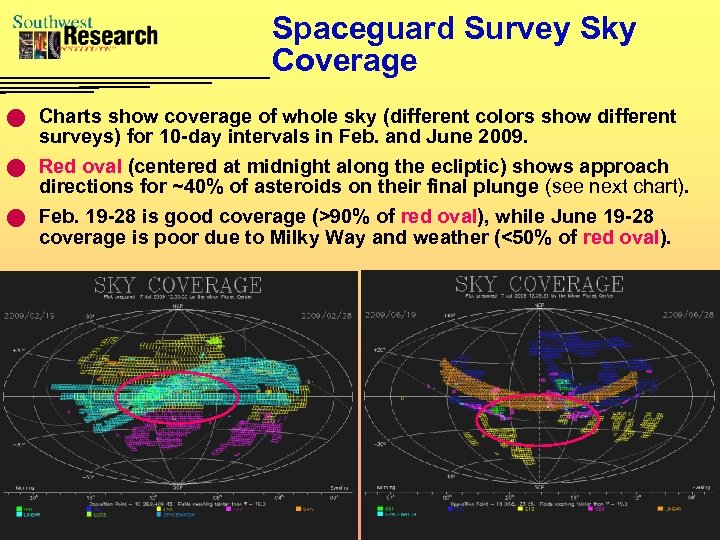 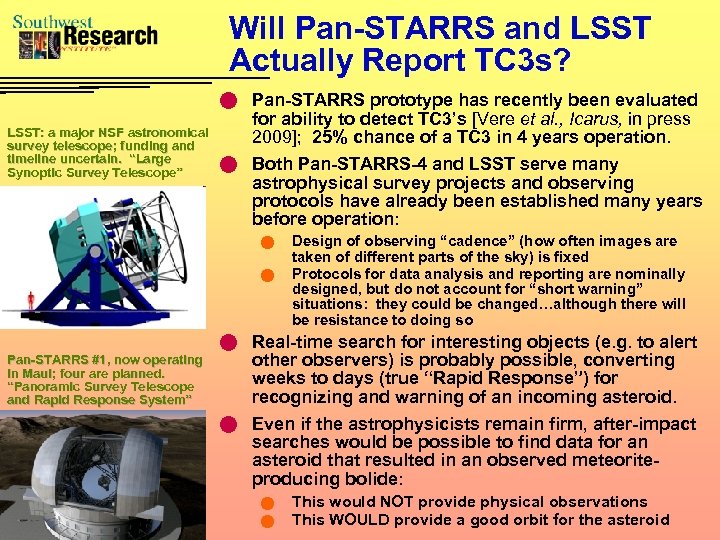 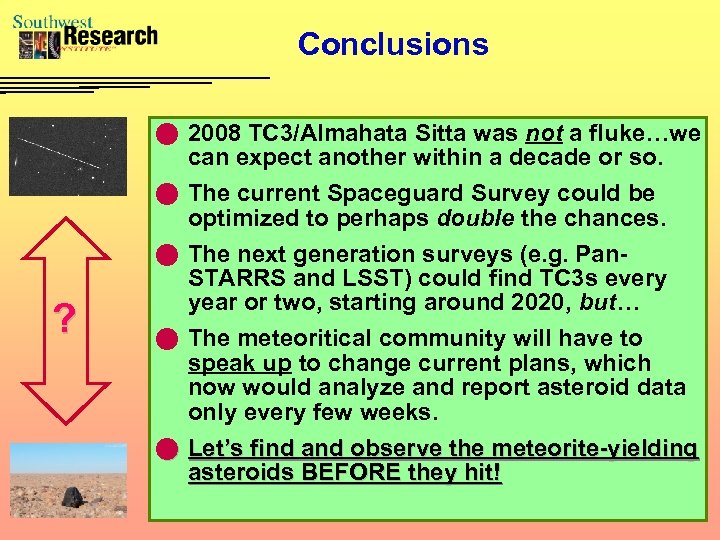 2008 TC 3 = Almahata Sitta TC 3 asteroid moving (W. Boschin, TNG) TC 3 atmospheric train (M. Mahir) Almahata Sitta fragment on ground in Sudan (P. Jenniskens) n Asteroid 2008 TC 3 was the first asteroid ever discovered and predicted to strike the Earth. n The predicted impact occurred, there are many records of its impact, and many resulting meteorites were collected on the ground (the Almahata Sitta ureilite, discussed in other talks). n Was this first-ever event unique and miraculous, or can we expect future opportunities to collect meteoritic samples from astronomically observed asteroids? n We show that we may expect future TC 3 -like events, especially if we proactively campaign for the required telescopic surveys.

Short-Term Warning Capability of Telescopic Surveys: Nobody Got it Right n Analyses in the 1990 s of the “Spaceguard Survey” only considered cataloging of near-Earth asteroids (NEAs); shortterm warning was evaluated only for rare comets. n Thus it was believed that there was only a tiny chance that a dangerous 30 -meter NEA would be found, let alone a “TC 3”. n Short-term hazard warning was evaluated (NASA SDT 2003) for the “next generation” surveys, but not for meteorite recovery. “Consider a 30– 40 -m office-building-sized object striking at 100 times the speed of a jetliner…. Even with the proposed augmented Spaceguard Survey, it is unlikely that such a small object would be discovered in advance; impact would occur without warning. ” – C. Chapman, EPSL (2004). “a short lead time for an NEO is extremely unlikely – we can expect either decades of warning or none at all” – Morrison, Harris, Sommer, Chapman & Carusi (“Asteroids III” 2002)

Capability for “Final Plunge” Detection by Current Survey n The Catalina Sky Survey (the telescope 1. 6 -meter Catalina Sky Survey telescope: discovered TC 3 shown and a smaller Schmidt) dominates Spaceguard discoveries, followed by LINEAR, then others. n Sky coverage is to varying magnitude (size) limits, with spatial/temporal limits: n n Poor coverage south of -45 deg. declination Poor coverage near Milky Way No coverage within 60 deg. of the Sun Poor coverage during Ariz. /N. Mex. summer n Half of “final plunge” objects are well placed to see, generally opposite the Sun; other half come from Sun’s direction. n Night-sky coverage repeats every 10 days: Most 30 m “dangerous” NEOs can be found because they can be detected ~2 weeks out n 5%-10% of TC 3’s detected (1 -2 days out) n LINEAR telescope in New Mexico, part of Spaceguard Survey n Optimization might yield TC 3 twice/decade.

Searching for Final Plungers n Red box indicates general range surveyed by Spaceguard telescopes. n Known Potentially Hazardous Asteroids (PHAs) were used to simulate direction from which impactors come: 53% of them are well within the survey range, coming from the general anti-solar direction. There is a concentration within the red oval (which is plotted in sky coverage charts). n Maximum warning time (days to observe before impact) depends on asteroid brightness (size) and on limiting magnitude of survey (V~20. 5 for Spaceguard, ~24 for next generation surveys). n Next generation surveys “could” find most night-time TC 3 s. But will they?

Will Pan-STARRS and LSST Actually Report TC 3 s? n Pan-STARRS prototype has recently been evaluated LSST: a major NSF astronomical survey telescope; funding and timeline uncertain. “Large Synoptic Survey Telescope” for ability to detect TC 3’s [Vere et al. , Icarus, in press 2009]; 25% chance of a TC 3 in 4 years operation. n Both Pan-STARRS-4 and LSST serve many astrophysical survey projects and observing protocols have already been established many years before operation: n n Design of observing “cadence” (how often images are taken of different parts of the sky) is fixed Protocols for data analysis and reporting are nominally designed, but do not account for “short warning” situations: they could be changed…although there will be resistance to doing so n Real-time search for interesting objects (e. g. to alert Pan-STARRS #1, now operating in Maui; four are planned. “Panoramic Survey Telescope and Rapid Response System” other observers) is probably possible, converting weeks to days (true “Rapid Response”) for recognizing and warning of an incoming asteroid. n Even if the astrophysicists remain firm, after-impact searches would be possible to find data for an asteroid that resulted in an observed meteoriteproducing bolide: n n This would NOT provide physical observations This WOULD provide a good orbit for the asteroid

Conclusions n 2008 TC 3/Almahata Sitta was not a fluke…we can expect another within a decade or so. n The current Spaceguard Survey could be n ? n n optimized to perhaps double the chances. The next generation surveys (e. g. Pan. STARRS and LSST) could find TC 3 s every year or two, starting around 2020, but… The meteoritical community will have to speak up to change current plans, which now would analyze and report asteroid data only every few weeks. Let’s find and observe the meteorite-yielding asteroids BEFORE they hit!