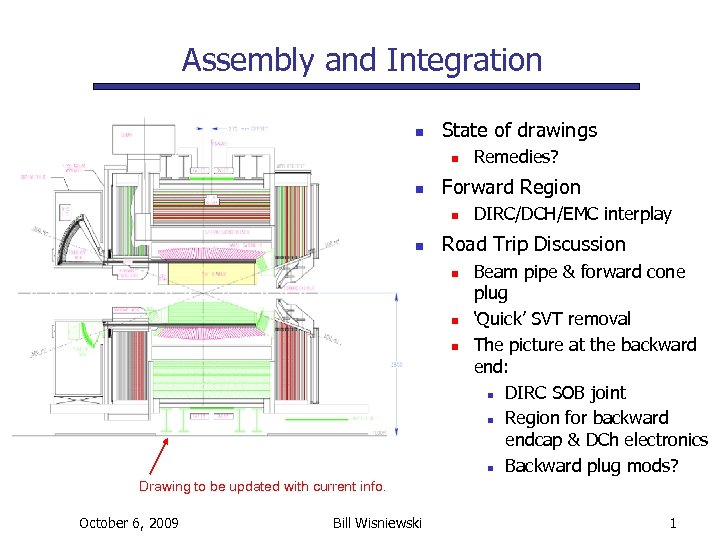 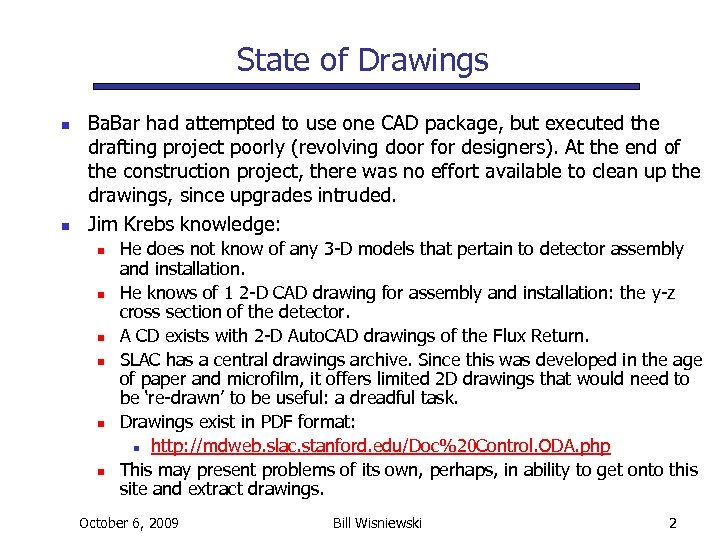 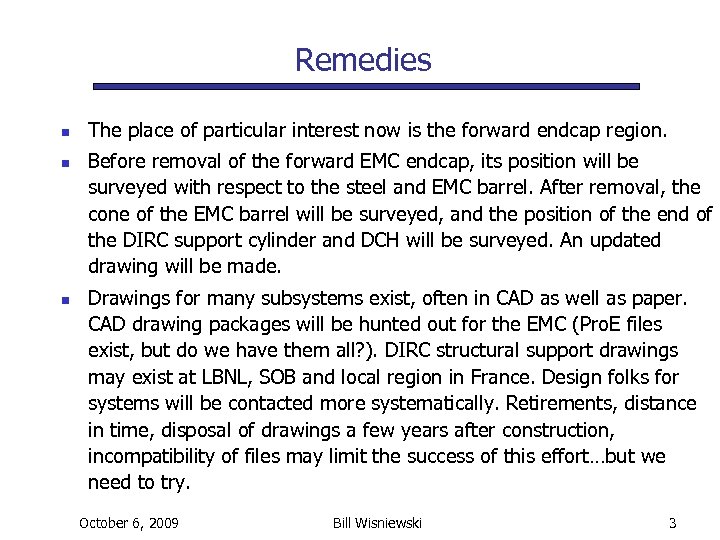 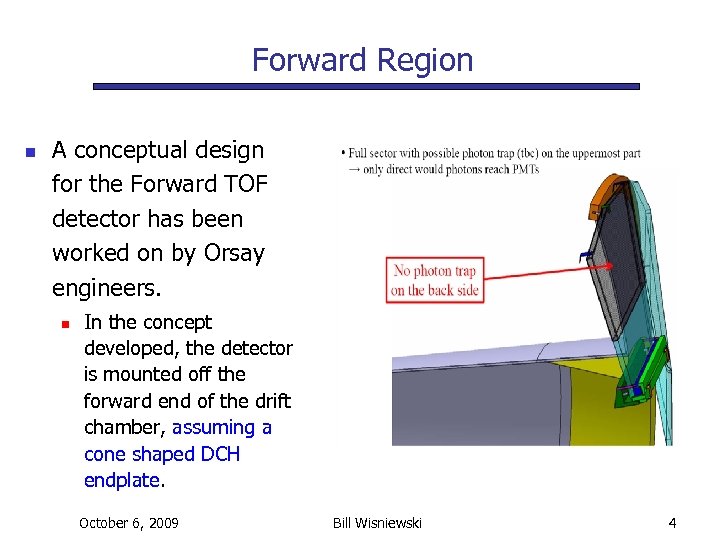 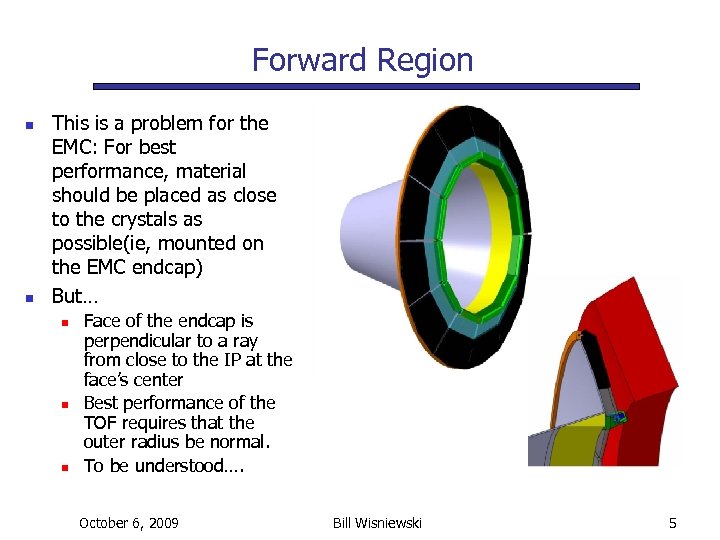 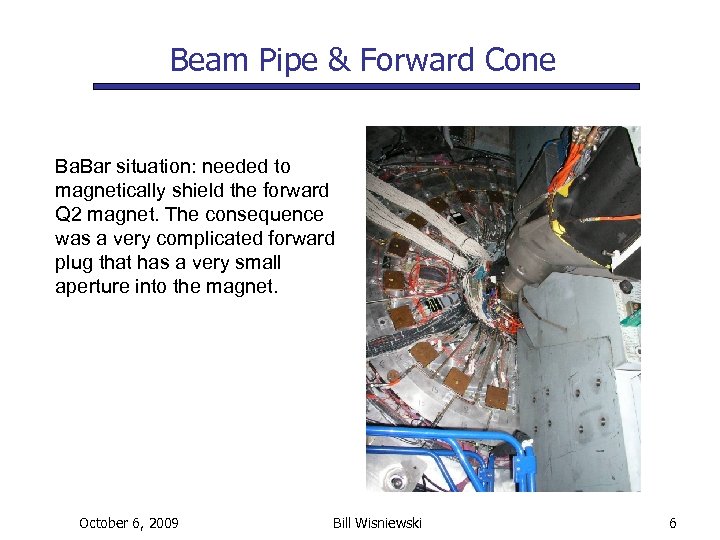 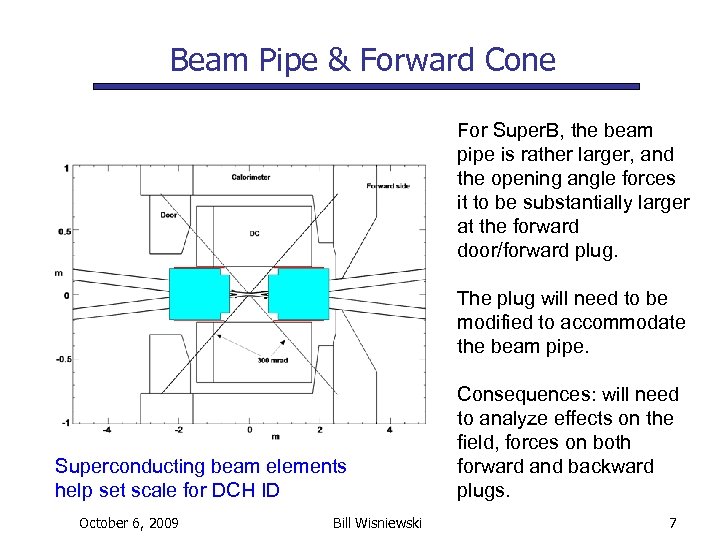 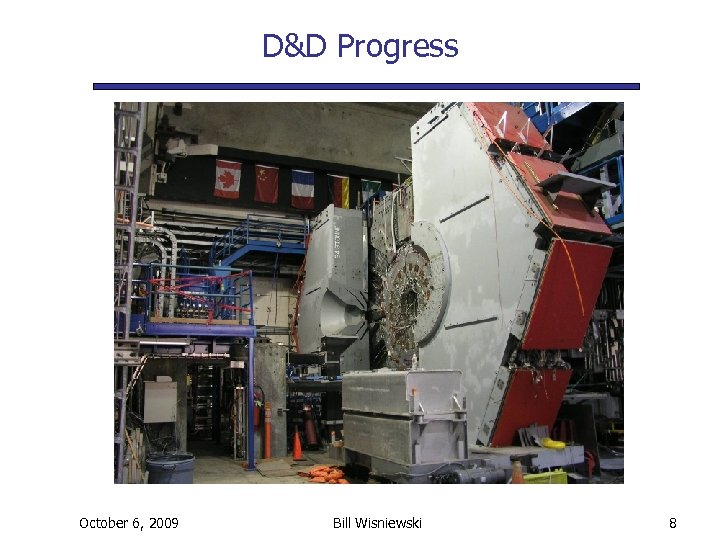 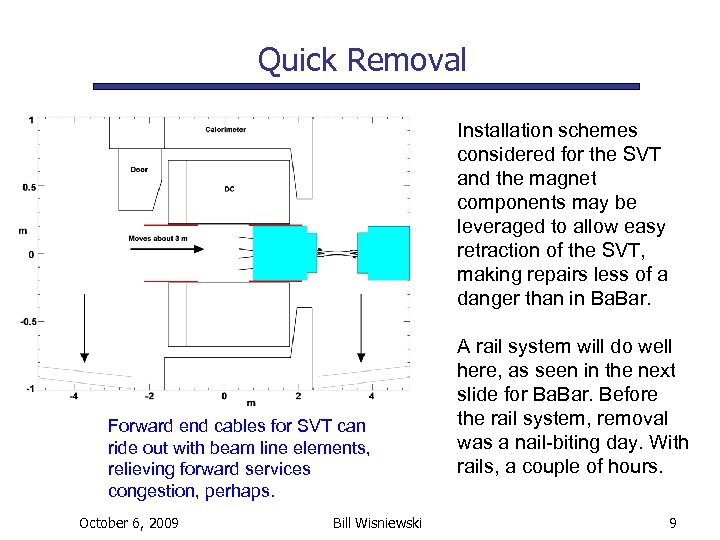 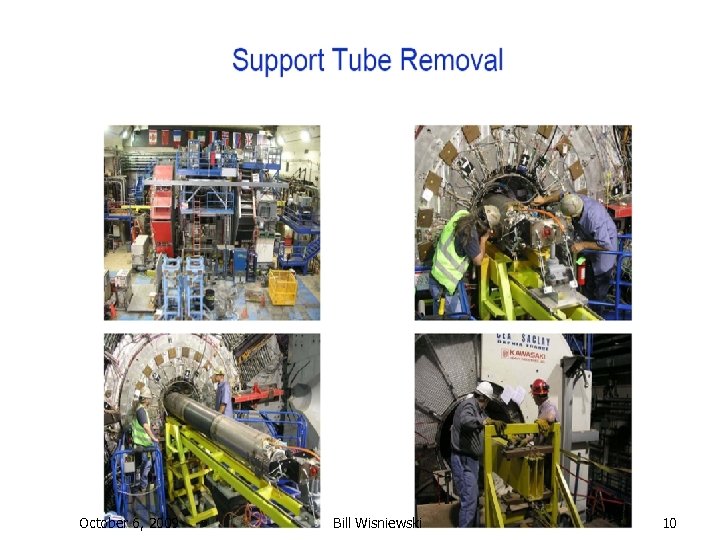 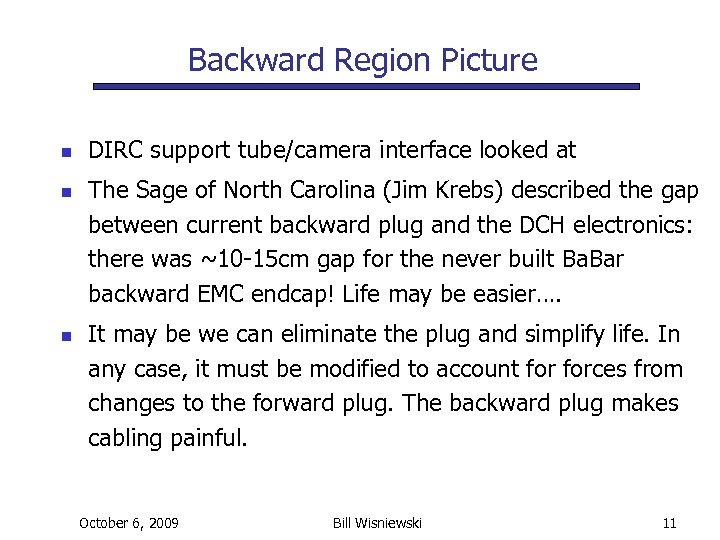 State of Drawings n n Ba. Bar had attempted to use one CAD package, but executed the drafting project poorly (revolving door for designers). At the end of the construction project, there was no effort available to clean up the drawings, since upgrades intruded. Jim Krebs knowledge: n n n He does not know of any 3 -D models that pertain to detector assembly and installation. He knows of 1 2 -D CAD drawing for assembly and installation: the y-z cross section of the detector. A CD exists with 2 -D Auto. CAD drawings of the Flux Return. SLAC has a central drawings archive. Since this was developed in the age of paper and microfilm, it offers limited 2 D drawings that would need to be ‘re-drawn’ to be useful: a dreadful task. Drawings exist in PDF format: n http: //mdweb. slac. stanford. edu/Doc%20 Control. ODA. php This may present problems of its own, perhaps, in ability to get onto this site and extract drawings. October 6, 2009 Bill Wisniewski 2

Remedies n n n The place of particular interest now is the forward endcap region. Before removal of the forward EMC endcap, its position will be surveyed with respect to the steel and EMC barrel. After removal, the cone of the EMC barrel will be surveyed, and the position of the end of the DIRC support cylinder and DCH will be surveyed. An updated drawing will be made. Drawings for many subsystems exist, often in CAD as well as paper. CAD drawing packages will be hunted out for the EMC (Pro. E files exist, but do we have them all? ). DIRC structural support drawings may exist at LBNL, SOB and local region in France. Design folks for systems will be contacted more systematically. Retirements, distance in time, disposal of drawings a few years after construction, incompatibility of files may limit the success of this effort…but we need to try. October 6, 2009 Bill Wisniewski 3

Forward Region n A conceptual design for the Forward TOF detector has been worked on by Orsay engineers. n In the concept developed, the detector is mounted off the forward end of the drift chamber, assuming a cone shaped DCH endplate. October 6, 2009 Bill Wisniewski 4

Forward Region n n This is a problem for the EMC: For best performance, material should be placed as close to the crystals as possible(ie, mounted on the EMC endcap) But… n n n Face of the endcap is perpendicular to a ray from close to the IP at the face’s center Best performance of the TOF requires that the outer radius be normal. To be understood…. October 6, 2009 Bill Wisniewski 5

Beam Pipe & Forward Cone For Super. B, the beam pipe is rather larger, and the opening angle forces it to be substantially larger at the forward door/forward plug. The plug will need to be modified to accommodate the beam pipe. Superconducting beam elements help set scale for DCH ID October 6, 2009 Bill Wisniewski Consequences: will need to analyze effects on the field, forces on both forward and backward plugs. 7

Quick Removal Installation schemes considered for the SVT and the magnet components may be leveraged to allow easy retraction of the SVT, making repairs less of a danger than in Ba. Bar. Forward end cables for SVT can ride out with beam line elements, relieving forward services congestion, perhaps. October 6, 2009 Bill Wisniewski A rail system will do well here, as seen in the next slide for Ba. Bar. Before the rail system, removal was a nail-biting day. With rails, a couple of hours. 9

Backward Region Picture n n n DIRC support tube/camera interface looked at The Sage of North Carolina (Jim Krebs) described the gap between current backward plug and the DCH electronics: there was ~10 -15 cm gap for the never built Ba. Bar backward EMC endcap! Life may be easier…. It may be we can eliminate the plug and simplify life. In any case, it must be modified to account forces from changes to the forward plug. The backward plug makes cabling painful. October 6, 2009 Bill Wisniewski 11