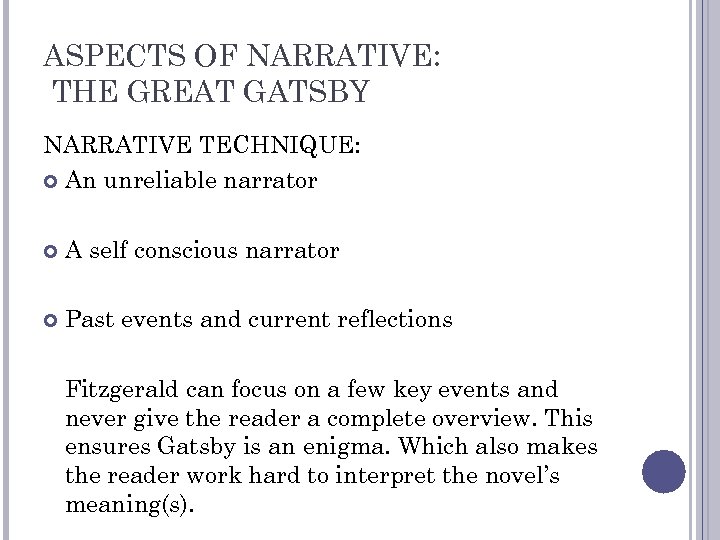 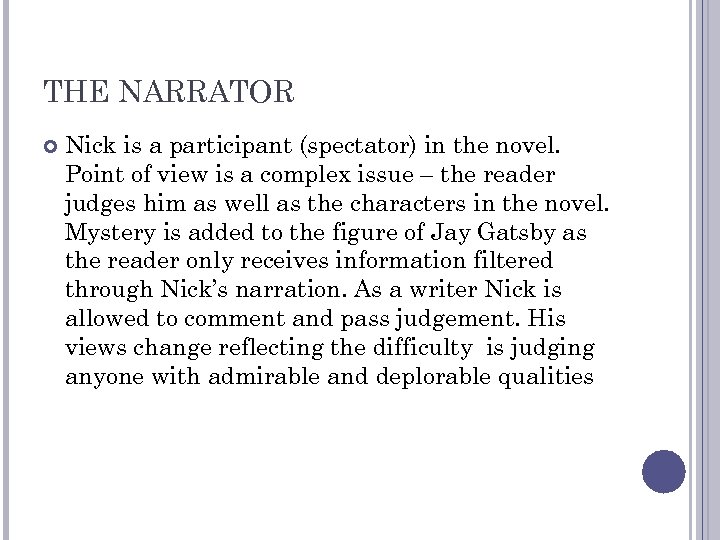 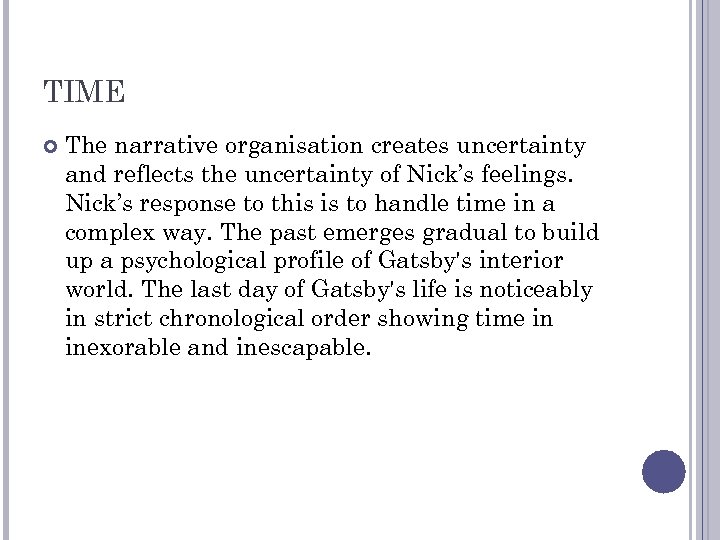 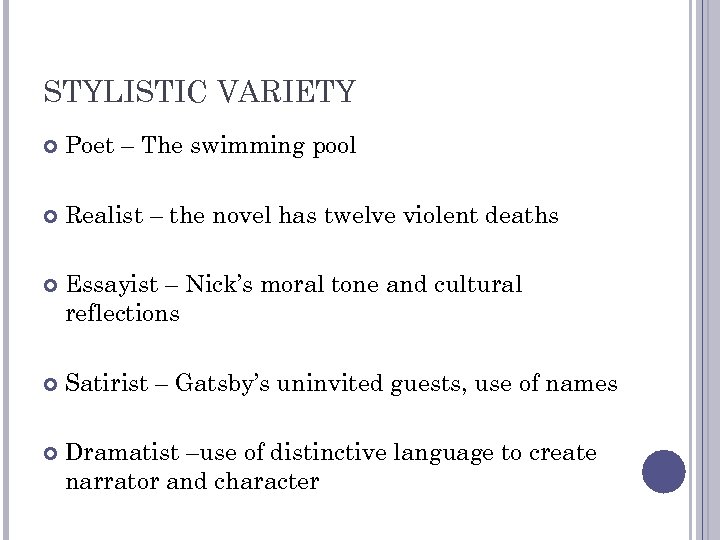 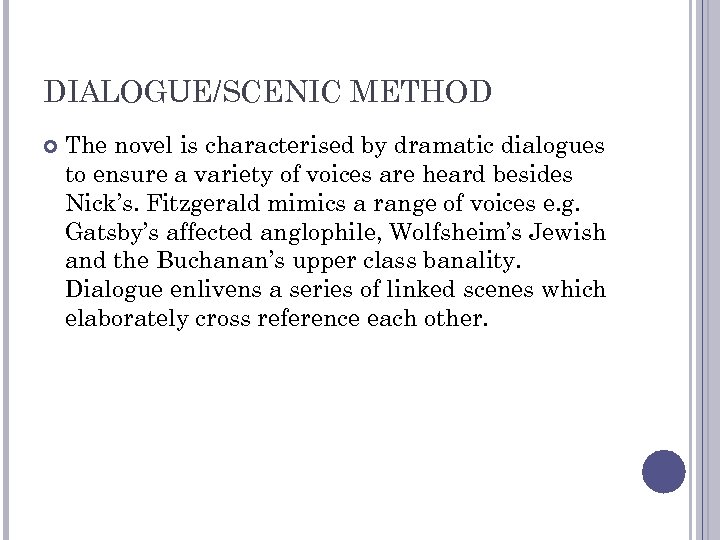 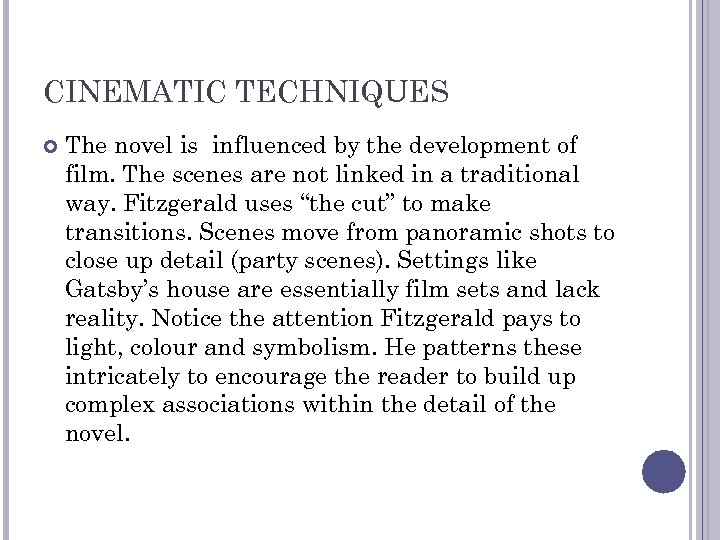 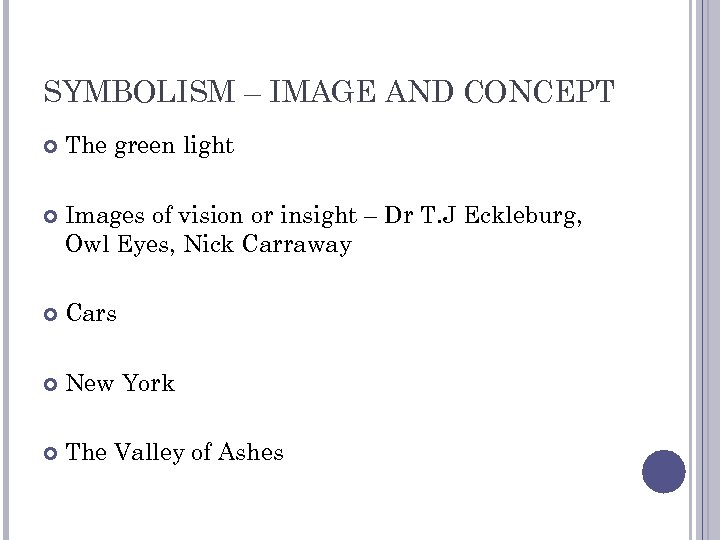 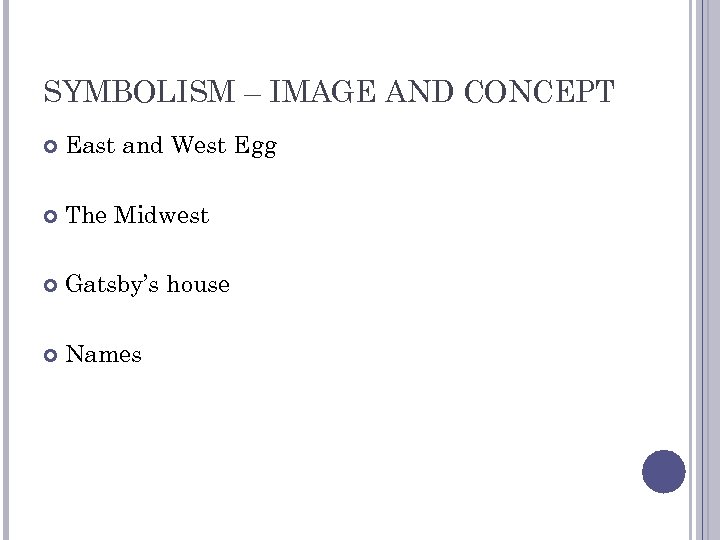 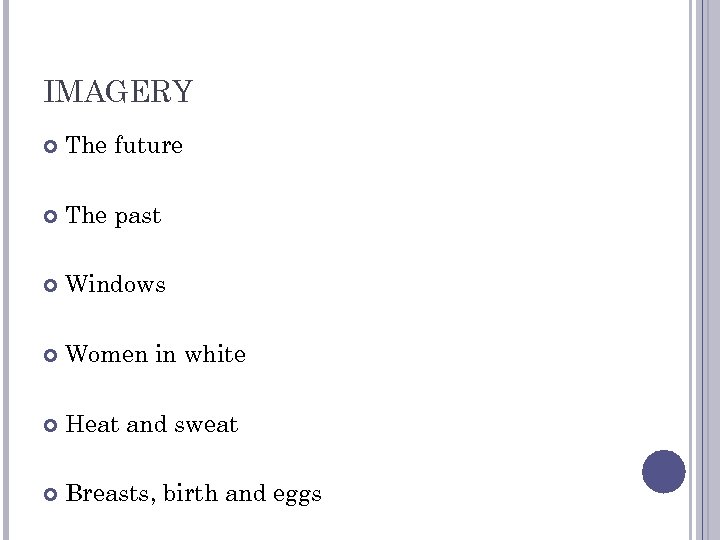 ASPECTS OF NARRATIVE: THE GREAT GATSBY NARRATIVE TECHNIQUE: An unreliable narrator A self conscious narrator Past events and current reflections Fitzgerald can focus on a few key events and never give the reader a complete overview. This ensures Gatsby is an enigma. Which also makes the reader work hard to interpret the novel’s meaning(s).

THE NARRATOR Nick is a participant (spectator) in the novel. Point of view is a complex issue – the reader judges him as well as the characters in the novel. Mystery is added to the figure of Jay Gatsby as the reader only receives information filtered through Nick’s narration. As a writer Nick is allowed to comment and pass judgement. His views change reflecting the difficulty is judging anyone with admirable and deplorable qualities

TIME The narrative organisation creates uncertainty and reflects the uncertainty of Nick’s feelings. Nick’s response to this is to handle time in a complex way. The past emerges gradual to build up a psychological profile of Gatsby's interior world. The last day of Gatsby's life is noticeably in strict chronological order showing time in inexorable and inescapable.

DIALOGUE/SCENIC METHOD The novel is characterised by dramatic dialogues to ensure a variety of voices are heard besides Nick’s. Fitzgerald mimics a range of voices e. g. Gatsby’s affected anglophile, Wolfsheim’s Jewish and the Buchanan’s upper class banality. Dialogue enlivens a series of linked scenes which elaborately cross reference each other.

CINEMATIC TECHNIQUES The novel is influenced by the development of film. The scenes are not linked in a traditional way. Fitzgerald uses “the cut” to make transitions. Scenes move from panoramic shots to close up detail (party scenes). Settings like Gatsby’s house are essentially film sets and lack reality. Notice the attention Fitzgerald pays to light, colour and symbolism. He patterns these intricately to encourage the reader to build up complex associations within the detail of the novel.

IMAGERY The future The past Windows Women in white Heat and sweat Breasts, birth and eggs