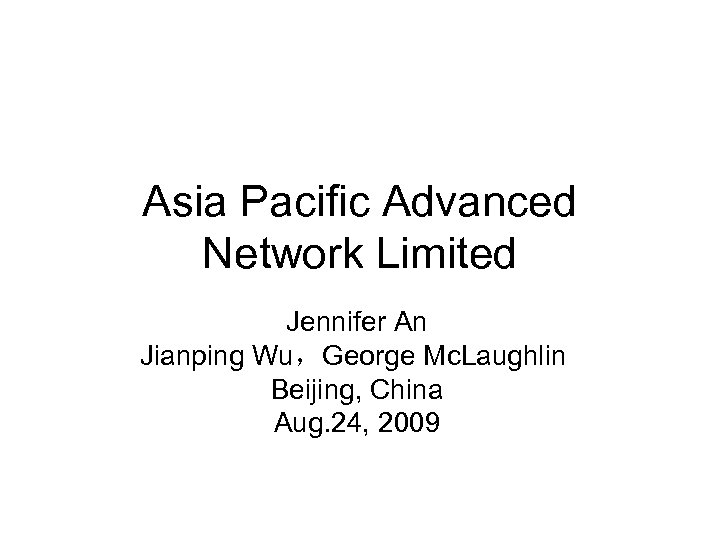 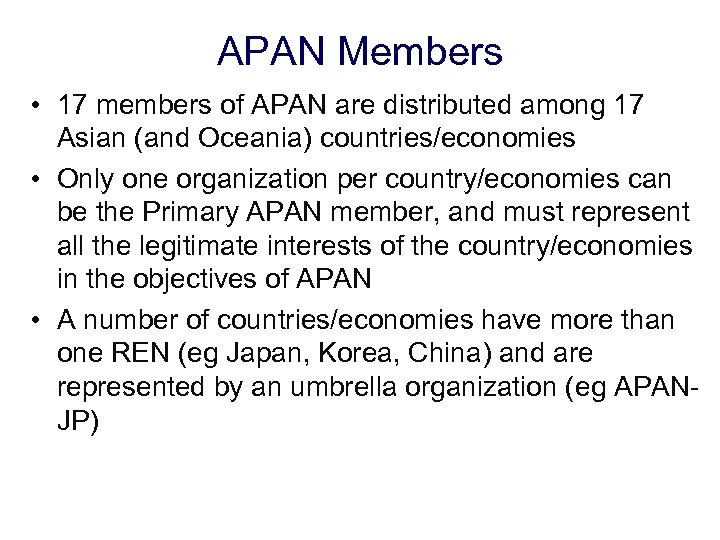 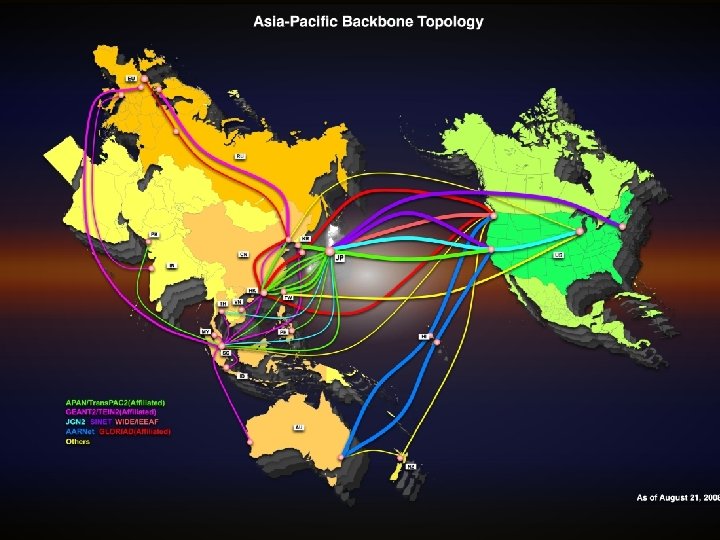 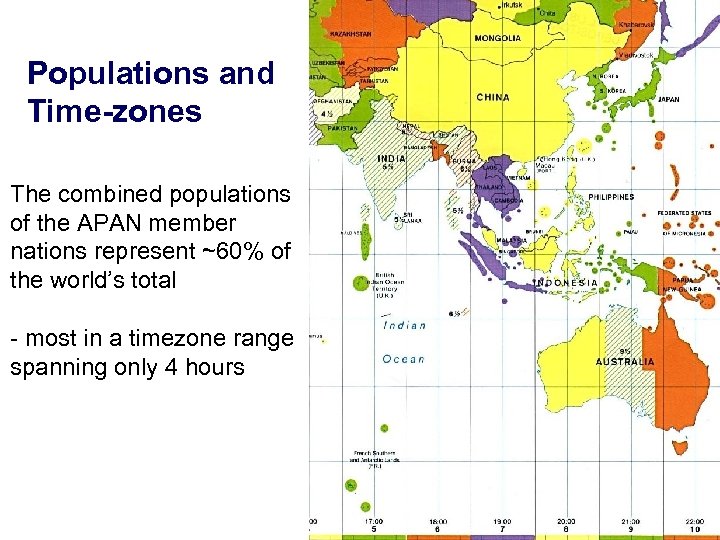 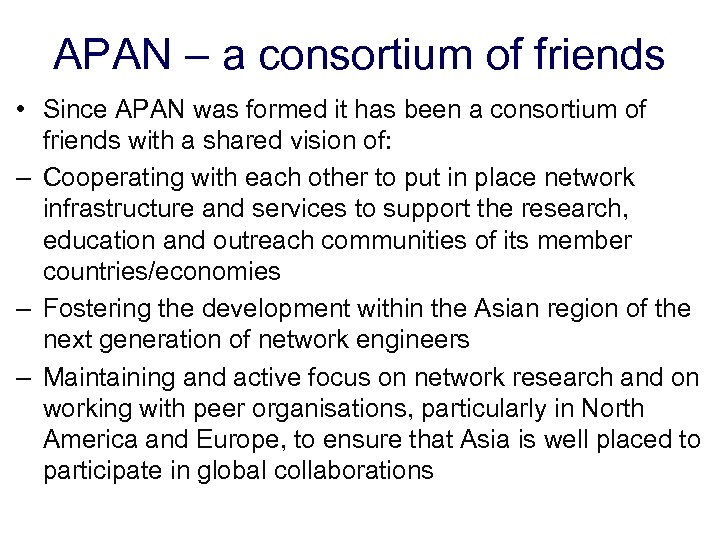 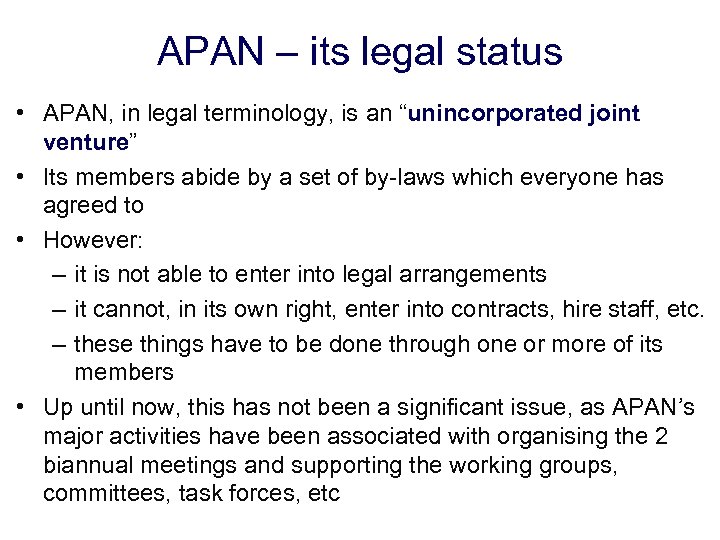 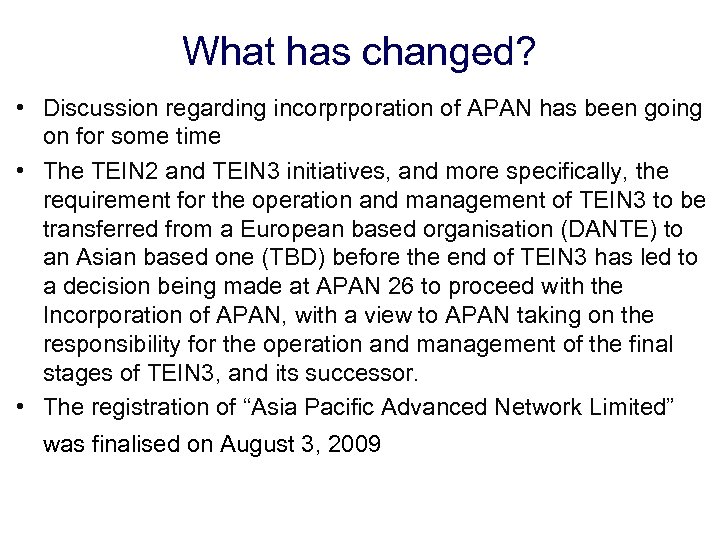 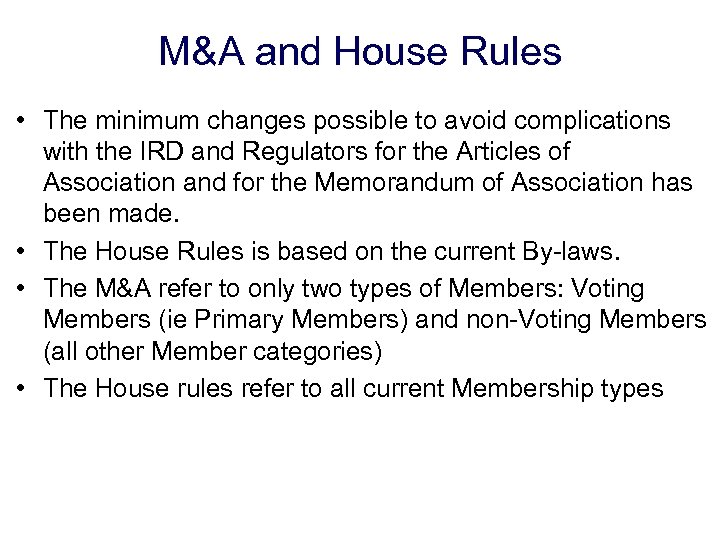 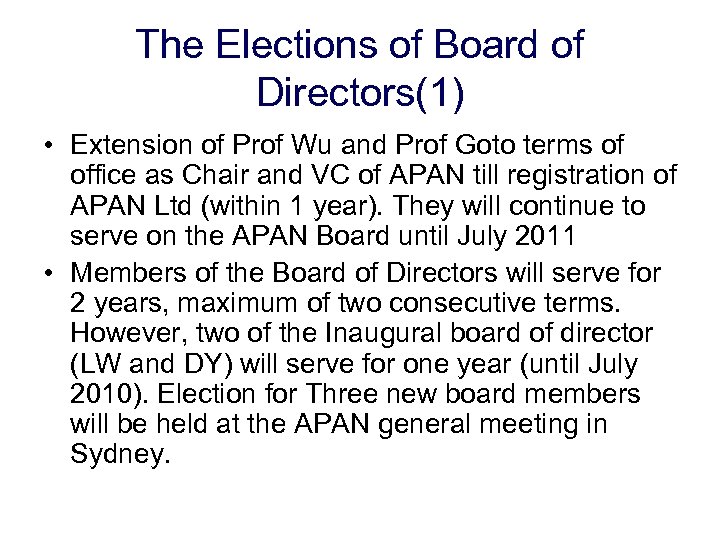 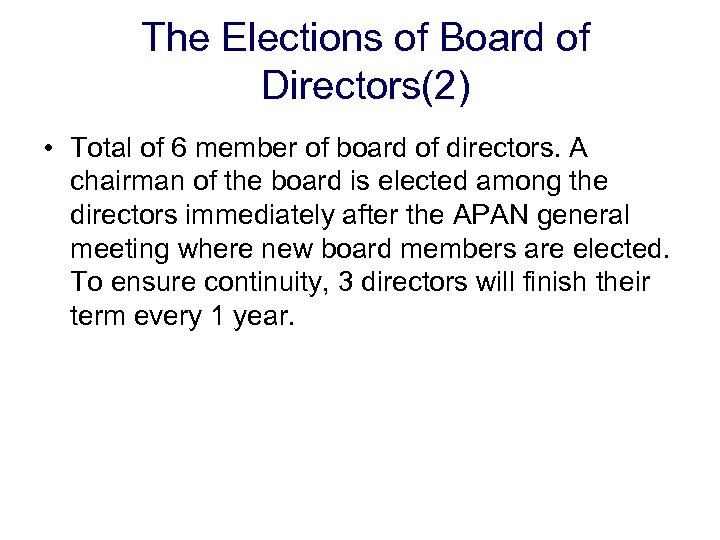 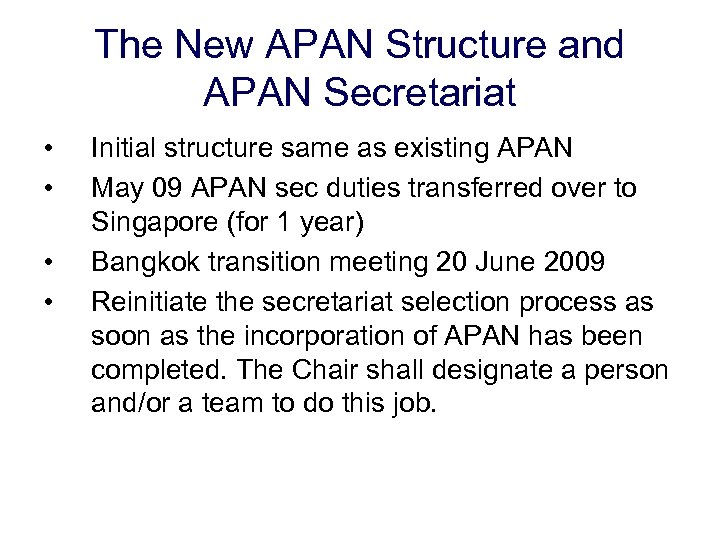 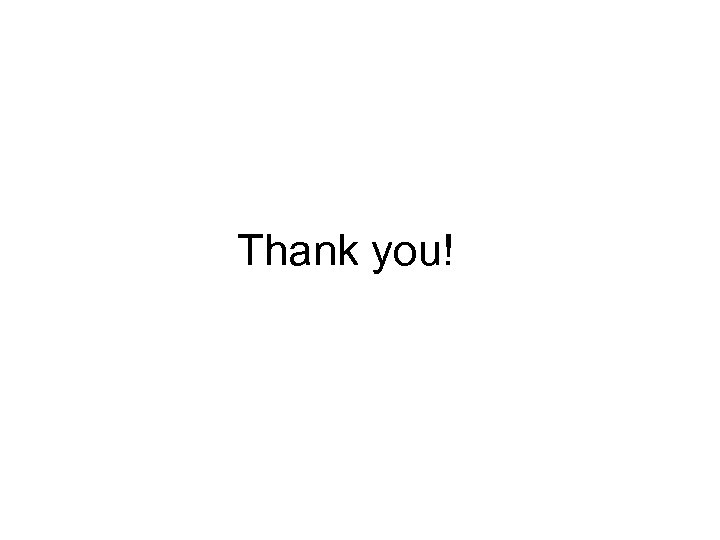 APAN – a consortium of friends • Since APAN was formed it has been a consortium of friends with a shared vision of: – Cooperating with each other to put in place network infrastructure and services to support the research, education and outreach communities of its member countries/economies – Fostering the development within the Asian region of the next generation of network engineers – Maintaining and active focus on network research and on working with peer organisations, particularly in North America and Europe, to ensure that Asia is well placed to participate in global collaborations

APAN – its legal status • APAN, in legal terminology, is an “unincorporated joint venture” • Its members abide by a set of by-laws which everyone has agreed to • However: – it is not able to enter into legal arrangements – it cannot, in its own right, enter into contracts, hire staff, etc. – these things have to be done through one or more of its members • Up until now, this has not been a significant issue, as APAN’s major activities have been associated with organising the 2 biannual meetings and supporting the working groups, committees, task forces, etc

What has changed? • Discussion regarding incorprporation of APAN has been going on for some time • The TEIN 2 and TEIN 3 initiatives, and more specifically, the requirement for the operation and management of TEIN 3 to be transferred from a European based organisation (DANTE) to an Asian based one (TBD) before the end of TEIN 3 has led to a decision being made at APAN 26 to proceed with the Incorporation of APAN, with a view to APAN taking on the responsibility for the operation and management of the final stages of TEIN 3, and its successor. • The registration of “Asia Pacific Advanced Network Limited” was finalised on August 3, 2009

M&A and House Rules • The minimum changes possible to avoid complications with the IRD and Regulators for the Articles of Association and for the Memorandum of Association has been made. • The House Rules is based on the current By-laws. • The M&A refer to only two types of Members: Voting Members (ie Primary Members) and non-Voting Members (all other Member categories) • The House rules refer to all current Membership types

The Elections of Board of Directors(1) • Extension of Prof Wu and Prof Goto terms of office as Chair and VC of APAN till registration of APAN Ltd (within 1 year). They will continue to serve on the APAN Board until July 2011 • Members of the Board of Directors will serve for 2 years, maximum of two consecutive terms. However, two of the Inaugural board of director (LW and DY) will serve for one year (until July 2010). Election for Three new board members will be held at the APAN general meeting in Sydney.

The Elections of Board of Directors(2) • Total of 6 member of board of directors. A chairman of the board is elected among the directors immediately after the APAN general meeting where new board members are elected. To ensure continuity, 3 directors will finish their term every 1 year.

The New APAN Structure and APAN Secretariat • • Initial structure same as existing APAN May 09 APAN sec duties transferred over to Singapore (for 1 year) Bangkok transition meeting 20 June 2009 Reinitiate the secretariat selection process as soon as the incorporation of APAN has been completed. The Chair shall designate a person and/or a team to do this job.