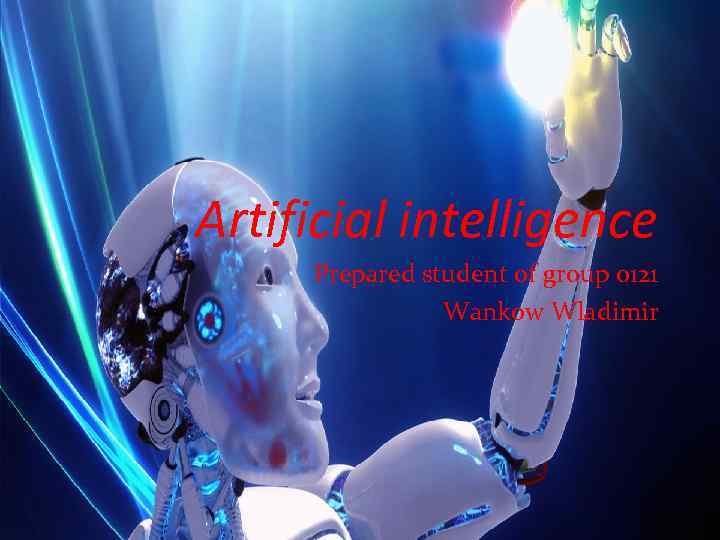 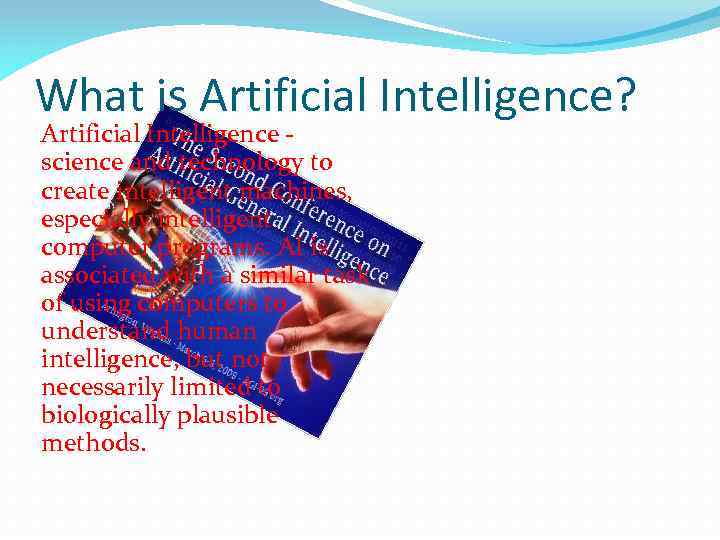 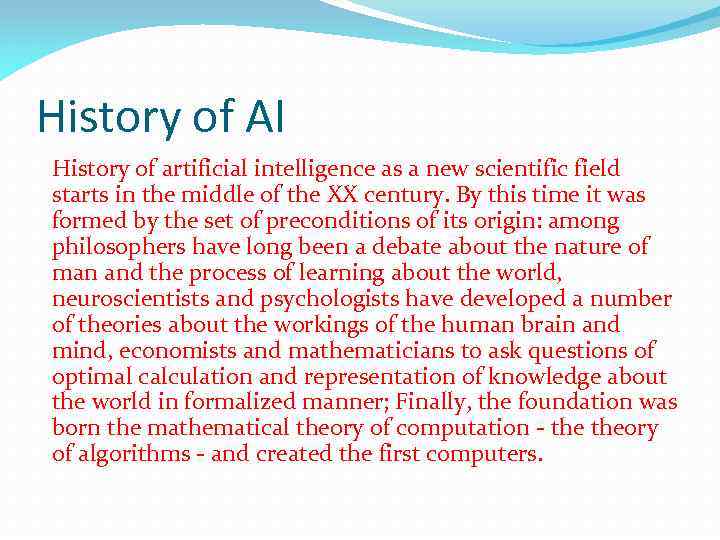 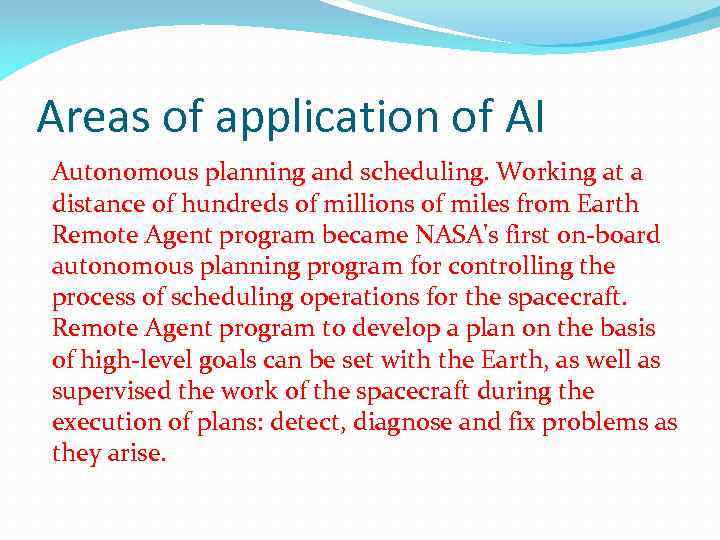 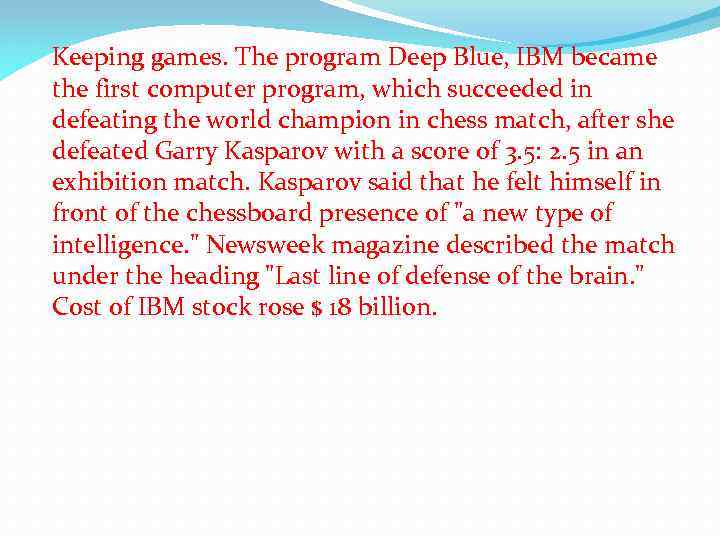 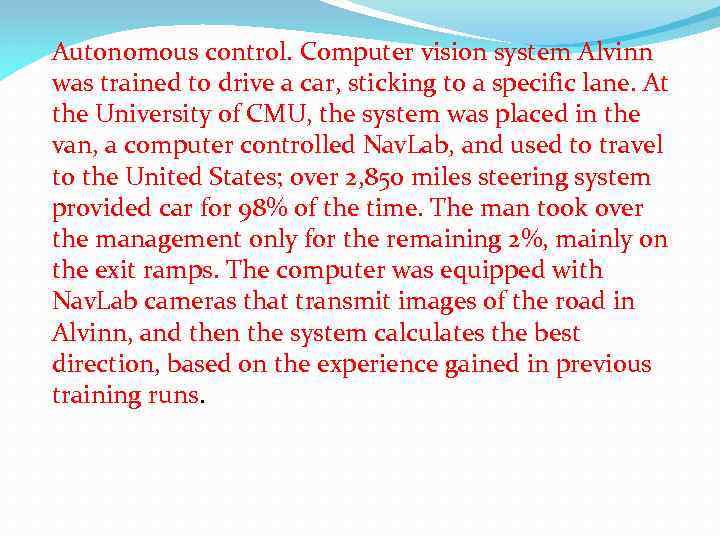 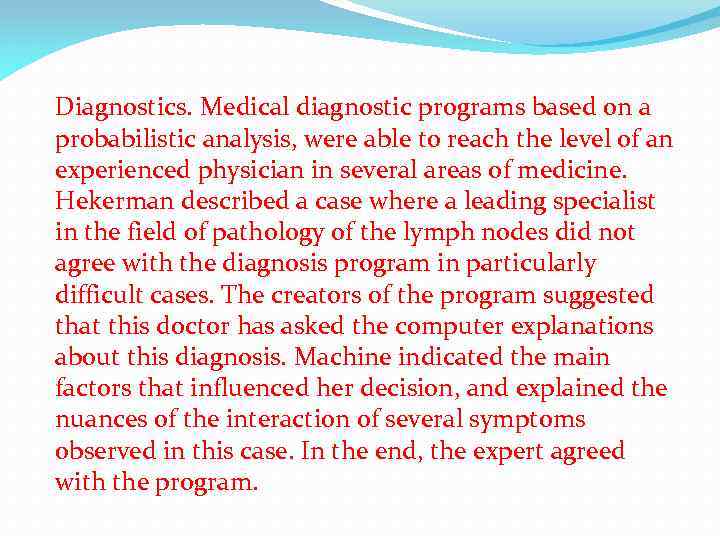 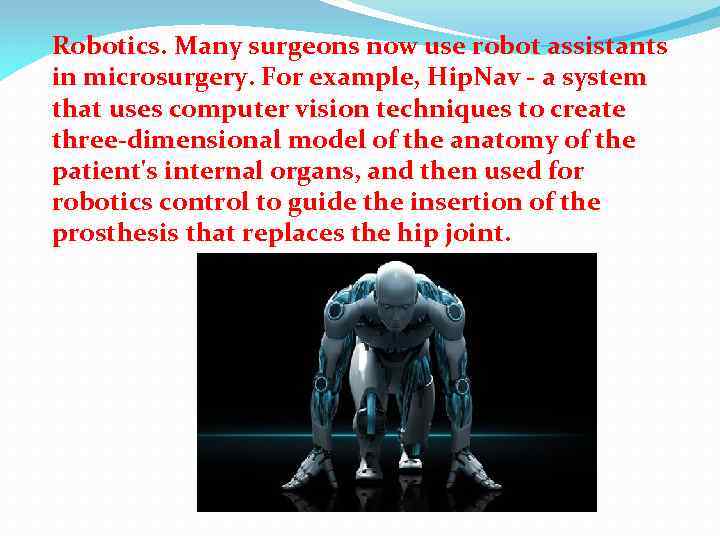 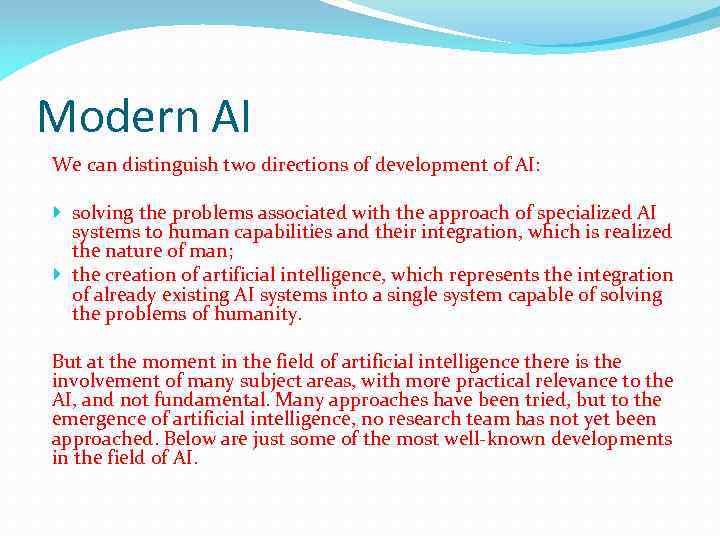 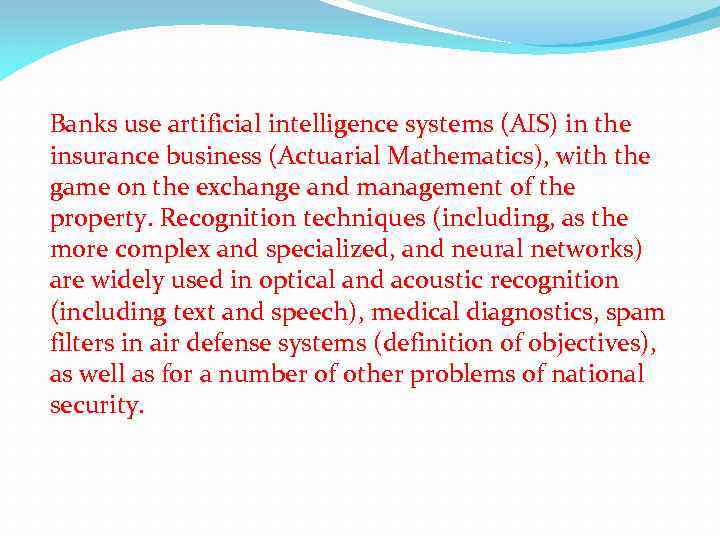 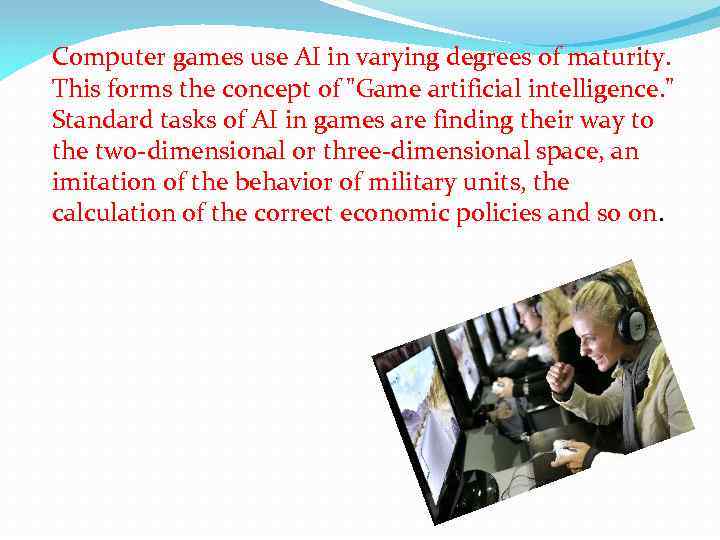 History of AI History of artificial intelligence as a new scientific field starts in the middle of the XX century. By this time it was formed by the set of preconditions of its origin: among philosophers have long been a debate about the nature of man and the process of learning about the world, neuroscientists and psychologists have developed a number of theories about the workings of the human brain and mind, economists and mathematicians to ask questions of optimal calculation and representation of knowledge about the world in formalized manner; Finally, the foundation was born the mathematical theory of computation - theory of algorithms - and created the first computers.

Areas of application of AI Autonomous planning and scheduling. Working at a distance of hundreds of millions of miles from Earth Remote Agent program became NASA's first on-board autonomous planning program for controlling the process of scheduling operations for the spacecraft. Remote Agent program to develop a plan on the basis of high-level goals can be set with the Earth, as well as supervised the work of the spacecraft during the execution of plans: detect, diagnose and fix problems as they arise.

Keeping games. The program Deep Blue, IBM became the first computer program, which succeeded in defeating the world champion in chess match, after she defeated Garry Kasparov with a score of 3. 5: 2. 5 in an exhibition match. Kasparov said that he felt himself in front of the chessboard presence of "a new type of intelligence. " Newsweek magazine described the match under the heading "Last line of defense of the brain. " Cost of IBM stock rose $ 18 billion.

Autonomous control. Computer vision system Alvinn was trained to drive a car, sticking to a specific lane. At the University of CMU, the system was placed in the van, a computer controlled Nav. Lab, and used to travel to the United States; over 2, 850 miles steering system provided car for 98% of the time. The man took over the management only for the remaining 2%, mainly on the exit ramps. The computer was equipped with Nav. Lab cameras that transmit images of the road in Alvinn, and then the system calculates the best direction, based on the experience gained in previous training runs.

Diagnostics. Medical diagnostic programs based on a probabilistic analysis, were able to reach the level of an experienced physician in several areas of medicine. Hekerman described a case where a leading specialist in the field of pathology of the lymph nodes did not agree with the diagnosis program in particularly difficult cases. The creators of the program suggested that this doctor has asked the computer explanations about this diagnosis. Machine indicated the main factors that influenced her decision, and explained the nuances of the interaction of several symptoms observed in this case. In the end, the expert agreed with the program.

Robotics. Many surgeons now use robot assistants in microsurgery. For example, Hip. Nav - a system that uses computer vision techniques to create three-dimensional model of the anatomy of the patient's internal organs, and then used for robotics control to guide the insertion of the prosthesis that replaces the hip joint.

Modern AI We can distinguish two directions of development of AI: solving the problems associated with the approach of specialized AI systems to human capabilities and their integration, which is realized the nature of man; the creation of artificial intelligence, which represents the integration of already existing AI systems into a single system capable of solving the problems of humanity. But at the moment in the field of artificial intelligence there is the involvement of many subject areas, with more practical relevance to the AI, and not fundamental. Many approaches have been tried, but to the emergence of artificial intelligence, no research team has not yet been approached. Below are just some of the most well-known developments in the field of AI.

Banks use artificial intelligence systems (AIS) in the insurance business (Actuarial Mathematics), with the game on the exchange and management of the property. Recognition techniques (including, as the more complex and specialized, and neural networks) are widely used in optical and acoustic recognition (including text and speech), medical diagnostics, spam filters in air defense systems (definition of objectives), as well as for a number of other problems of national security.

Computer games use AI in varying degrees of maturity. This forms the concept of "Game artificial intelligence. " Standard tasks of AI in games are finding their way to the two-dimensional or three-dimensional space, an imitation of the behavior of military units, the calculation of the correct economic policies and so on.

Howard Gardner’s: Multiple Intelligences Presented to you by