Arbitration court of London Has executed the student 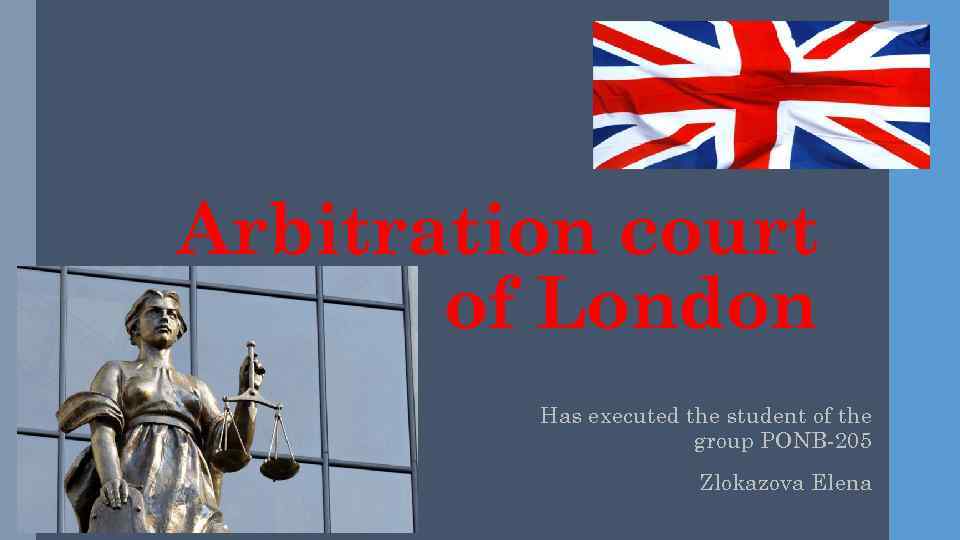 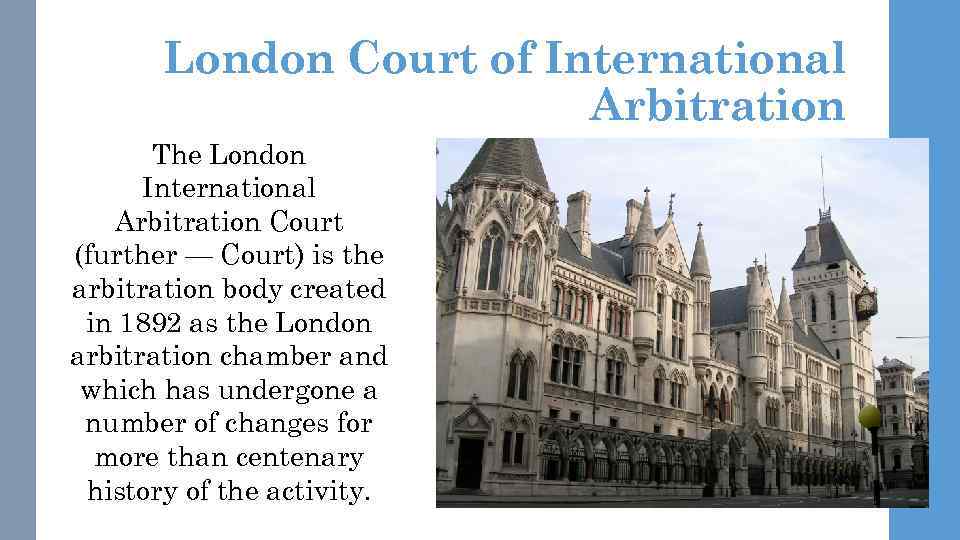 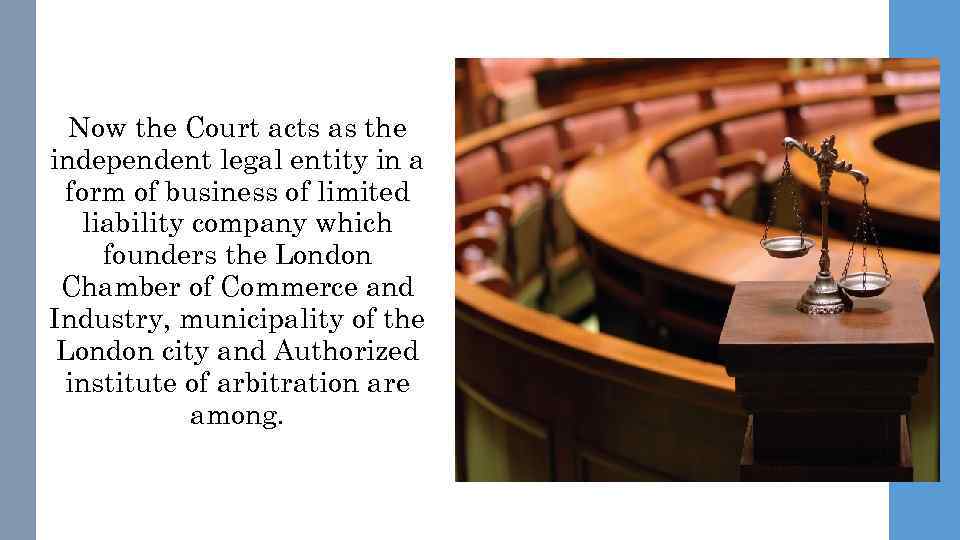 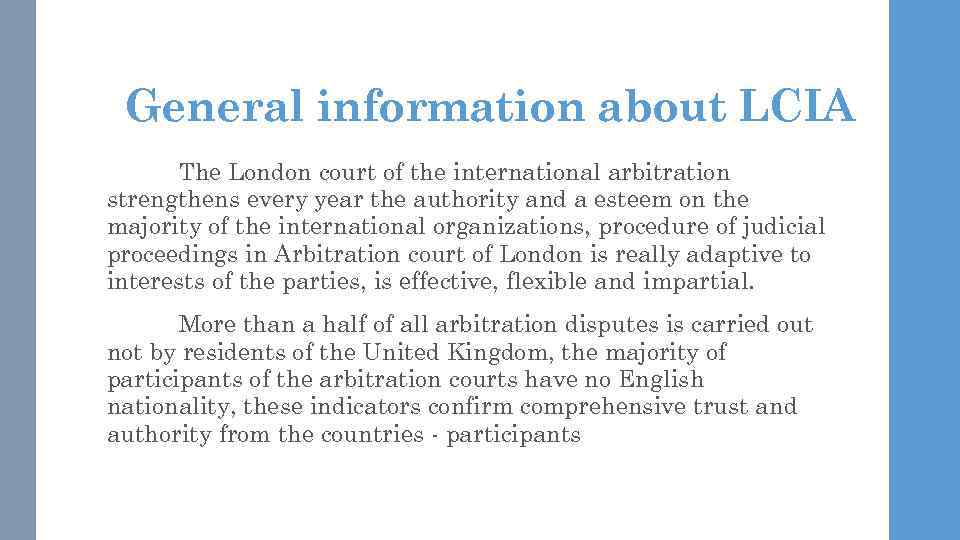 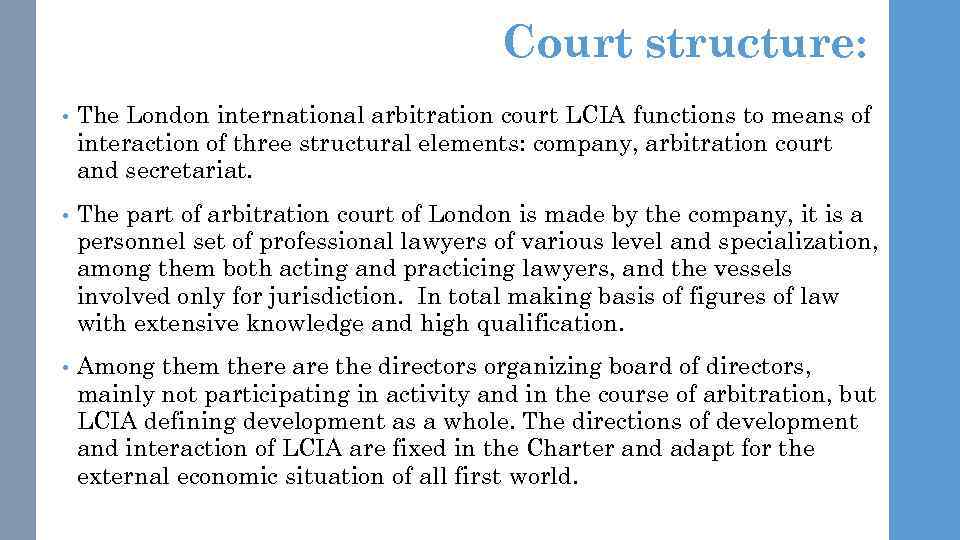 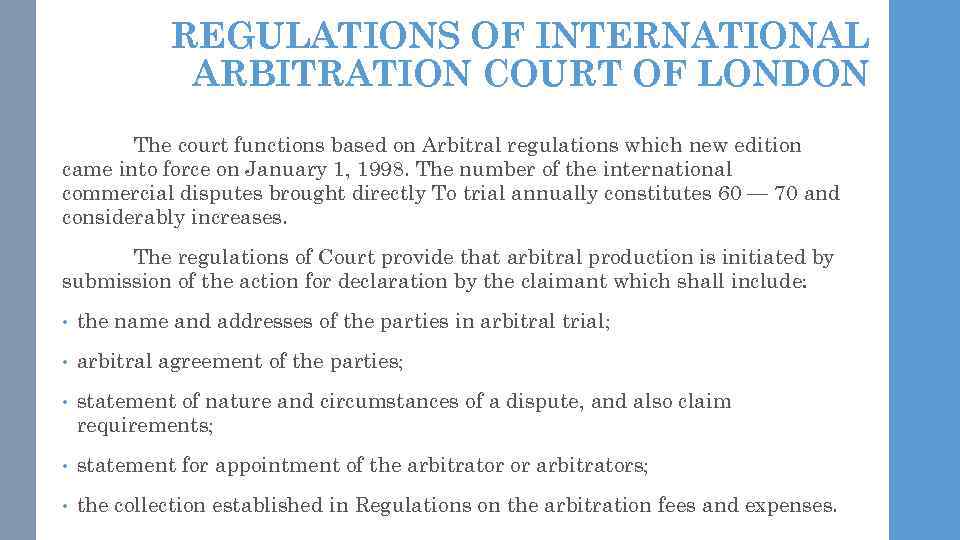 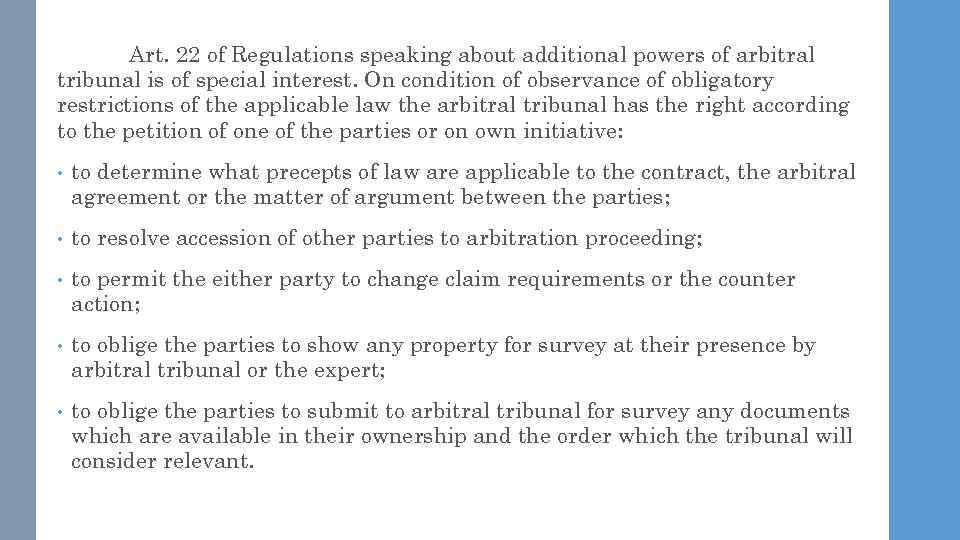 Скачать презентацию Arbitration court of London Has executed the student

Now the Court acts as the independent legal entity in a form of business of limited liability company which founders the London Chamber of Commerce and Industry, municipality of the London city and Authorized institute of arbitration are among.

General information about LCIA The London court of the international arbitration strengthens every year the authority and a esteem on the majority of the international organizations, procedure of judicial proceedings in Arbitration court of London is really adaptive to interests of the parties, is effective, flexible and impartial. More than a half of all arbitration disputes is carried out not by residents of the United Kingdom, the majority of participants of the arbitration courts have no English nationality, these indicators confirm comprehensive trust and authority from the countries - participants

Court structure: • The London international arbitration court LCIA functions to means of interaction of three structural elements: company, arbitration court and secretariat. • The part of arbitration court of London is made by the company, it is a personnel set of professional lawyers of various level and specialization, among them both acting and practicing lawyers, and the vessels involved only for jurisdiction. In total making basis of figures of law with extensive knowledge and high qualification. • Among them there are the directors organizing board of directors, mainly not participating in activity and in the course of arbitration, but LCIA defining development as a whole. The directions of development and interaction of LCIA are fixed in the Charter and adapt for the external economic situation of all first world.

REGULATIONS OF INTERNATIONAL ARBITRATION COURT OF LONDON The court functions based on Arbitral regulations which new edition came into force on January 1, 1998. The number of the international commercial disputes brought directly To trial annually constitutes 60 — 70 and considerably increases. The regulations of Court provide that arbitral production is initiated by submission of the action for declaration by the claimant which shall include: • the name and addresses of the parties in arbitral trial; • arbitral agreement of the parties; • statement of nature and circumstances of a dispute, and also claim requirements; • statement for appointment of the arbitrator or arbitrators; • the collection established in Regulations on the arbitration fees and expenses.

The parties can determine the venue of arbitration proceeding. If they didn't seize this opportunity, London or other more reasonable place according to the judicial discretion will be the place of arbitration. Arbitration proceeding is conducted in language in which the arbitral agreement is constituted if the parties didn't agree about other. Any party can be provided by the practicing lawyers or other persons on condition of presentation of such proof of their powers what the arbitral tribunal can demand (Art. 16 — 18).

Having analysed contents of regulations, it is possible to draw a conclusion that, despite distinctions in regulation details, there are general approaches in their organization and functioning: • the institution arbitration exercises tough administrative control of appointment, branch and replacement of arbitrators; • strict requirements concerning their impartiality and independence are imposed to arbitrators, and reasonable doubts in it lead to their unconditional disqualification; • the arbitral decision is passed in the place of arbitration proceeding by a majority vote of arbitrators and comes into force from the moment of its removal, being final for the parties and obligatory to unconditional execution.

The court of London supported Friedman's Letter. One in a dispute with shareholders of Turkcell Letter. One which headquarters is in Luxembourg acquired the right to redeem shares of the Turkish telecommunication company at other shareholder of Cukurova Mehmet Karamekhmet and national bank of Turkey of Ziraat. The Turkish shareholders are obliged to be determined by the judgment in 60 -day time whether they are ready to redeem shares of Turkcell for $2, 7 billion or to sell the packet for $2, 8 billion. "We are very happy with the award of arbitration in London, supported our line item. We already long time try to find a way out of this ten-year deadlock to remove the company from corporate management" — the managing partner of L 1 Technology Alexey Reznikovich commented on the judgment of Londonga. Since 2007 Friedman's Alfa Group tries to receive control over Turkcell operator with the Turkish company Cukurova. In 2014 Cukurova paid Alfa Group for a share in Turkcell of $1, 6 billion. In the fall of 2015 of Alfa Telecom submitted the application to anti-monopoly committee of Turkey for acquisition of a controlling stock of Turkcell. On April 1, 2016 the Turkish shareholder suggested to redeem a share of Alfa Group.

London Court of International Arbitration The