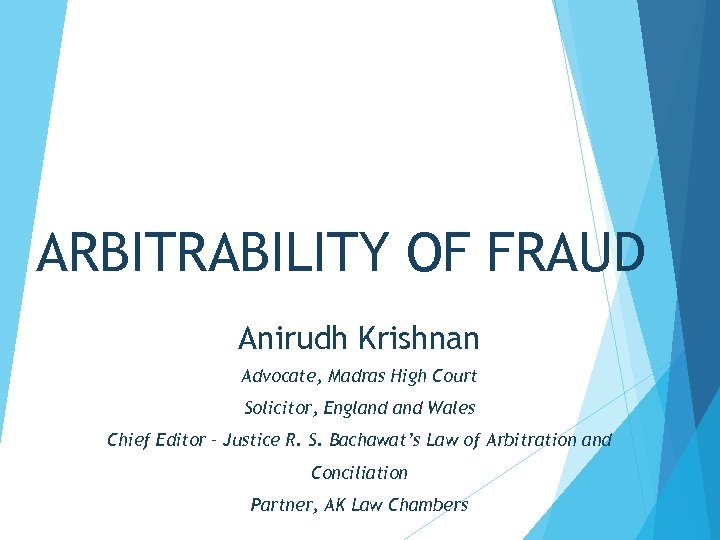 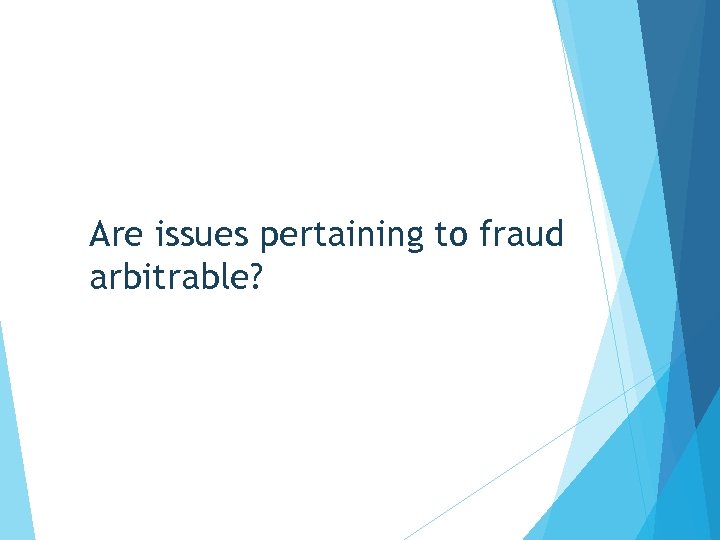 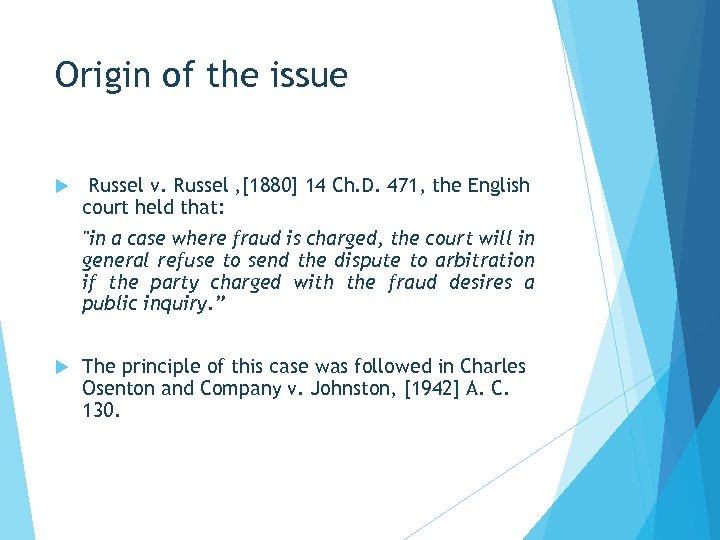 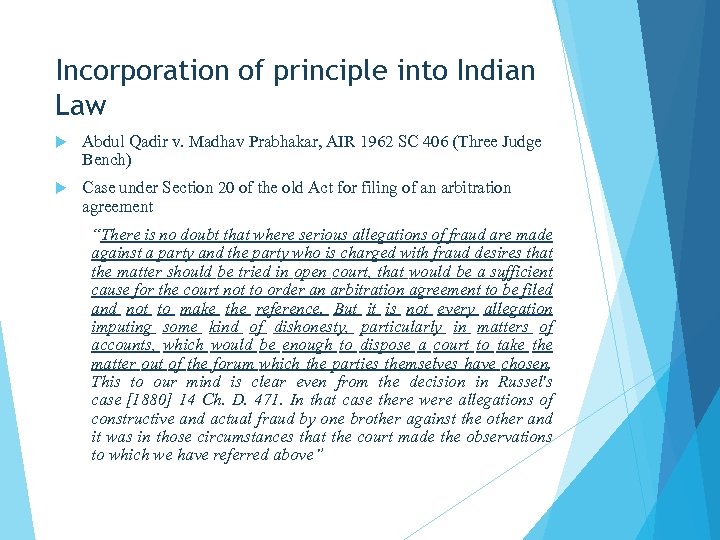 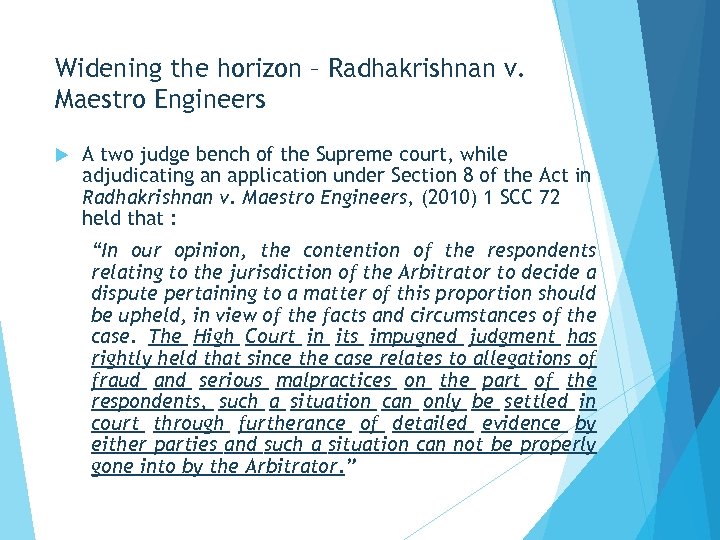 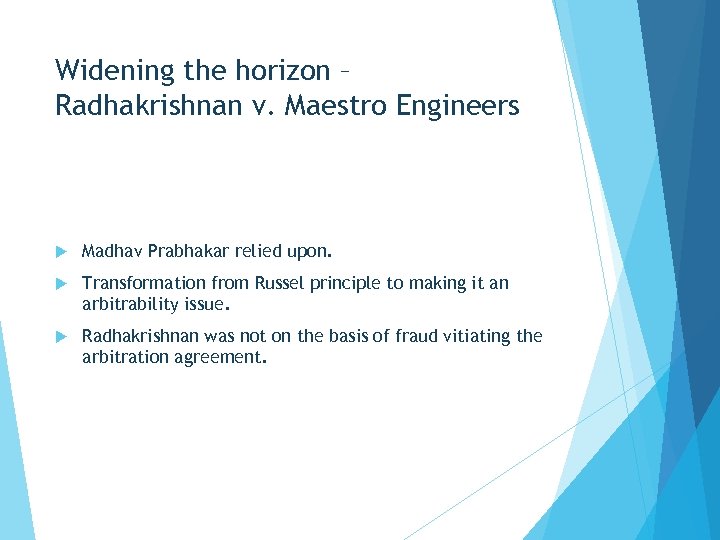 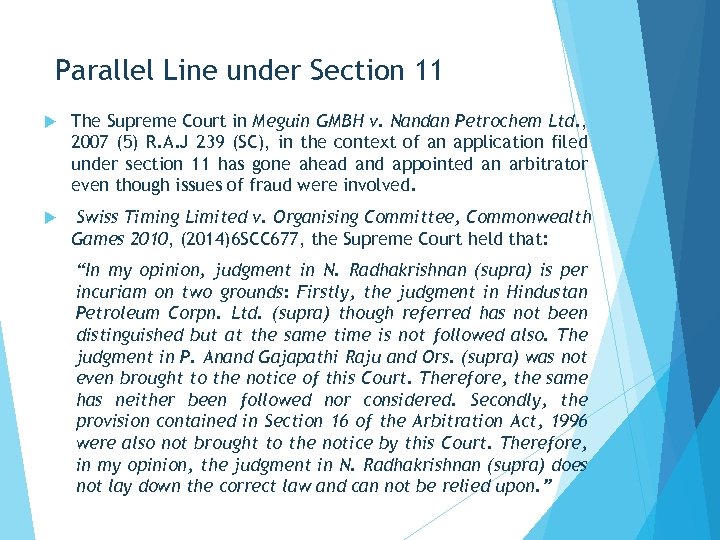 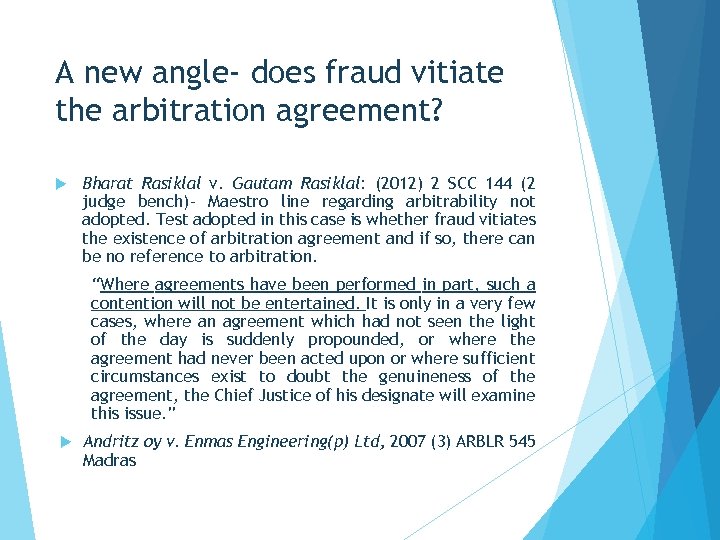 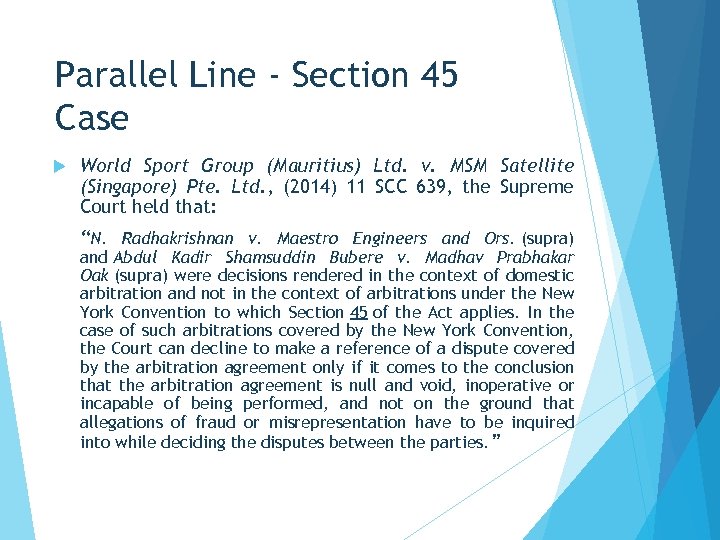 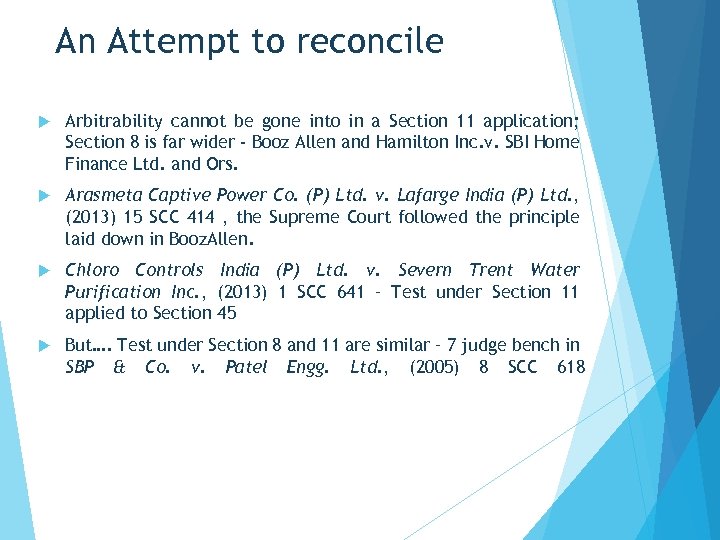 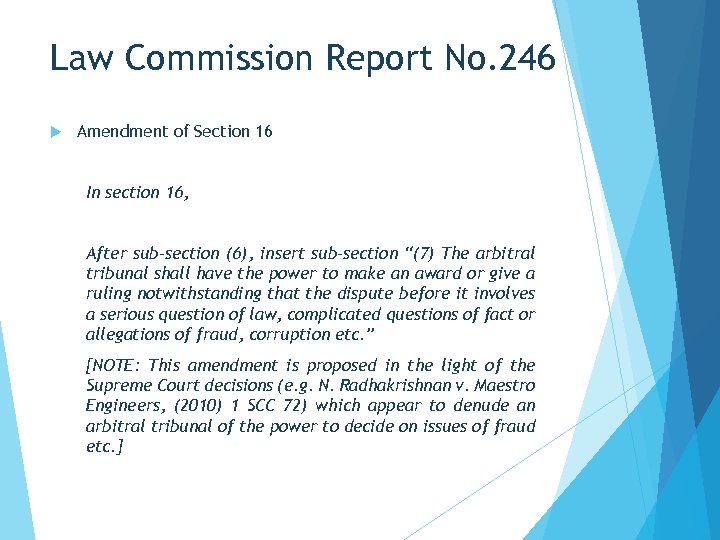 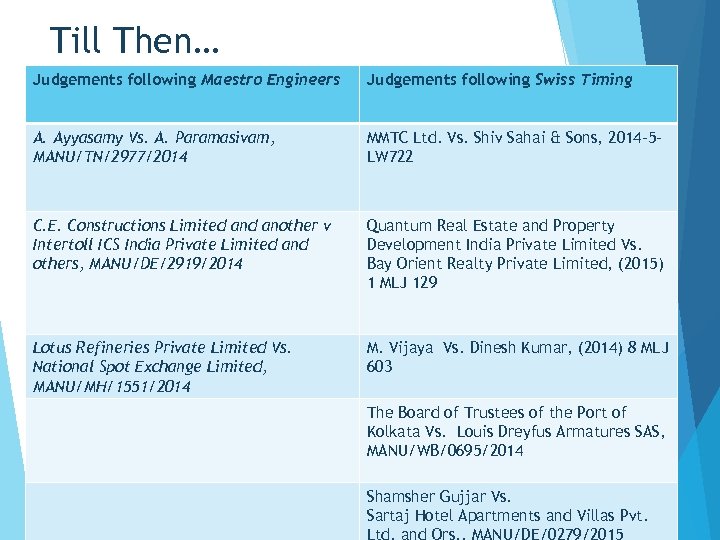 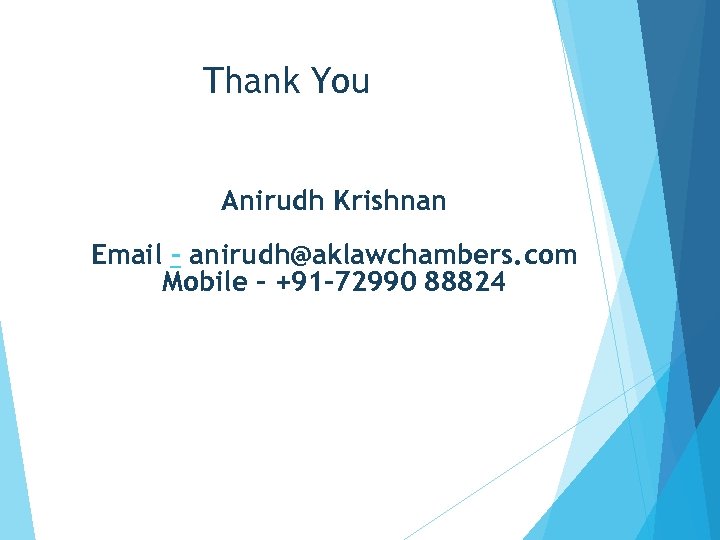 Are issues pertaining to fraud arbitrable?

Origin of the issue Russel v. Russel , [1880] 14 Ch. D. 471, the English court held that: "in a case where fraud is charged, the court will in general refuse to send the dispute to arbitration if the party charged with the fraud desires a public inquiry. ” The principle of this case was followed in Charles Osenton and Company v. Johnston, [1942] A. C. 130.

Incorporation of principle into Indian Law Abdul Qadir v. Madhav Prabhakar, AIR 1962 SC 406 (Three Judge Bench) Case under Section 20 of the old Act for filing of an arbitration agreement “There is no doubt that where serious allegations of fraud are made against a party and the party who is charged with fraud desires that the matter should be tried in open court, that would be a sufficient cause for the court not to order an arbitration agreement to be filed and not to make the reference. But it is not every allegation imputing some kind of dishonesty, particularly in matters of accounts, which would be enough to dispose a court to take the matter out of the forum which the parties themselves have chosen. This to our mind is clear even from the decision in Russel's case [1880] 14 Ch. D. 471. In that case there were allegations of constructive and actual fraud by one brother against the other and it was in those circumstances that the court made the observations to which we have referred above”

Widening the horizon – Radhakrishnan v. Maestro Engineers A two judge bench of the Supreme court, while adjudicating an application under Section 8 of the Act in Radhakrishnan v. Maestro Engineers, (2010) 1 SCC 72 held that : “In our opinion, the contention of the respondents relating to the jurisdiction of the Arbitrator to decide a dispute pertaining to a matter of this proportion should be upheld, in view of the facts and circumstances of the case. The High Court in its impugned judgment has rightly held that since the case relates to allegations of fraud and serious malpractices on the part of the respondents, such a situation can only be settled in court through furtherance of detailed evidence by either parties and such a situation can not be properly gone into by the Arbitrator. ”

Widening the horizon – Radhakrishnan v. Maestro Engineers Madhav Prabhakar relied upon. Transformation from Russel principle to making it an arbitrability issue. Radhakrishnan was not on the basis of fraud vitiating the arbitration agreement.

Parallel Line under Section 11 The Supreme Court in Meguin GMBH v. Nandan Petrochem Ltd. , 2007 (5) R. A. J 239 (SC), in the context of an application filed under section 11 has gone ahead and appointed an arbitrator even though issues of fraud were involved. Swiss Timing Limited v. Organising Committee, Commonwealth Games 2010, (2014)6 SCC 677, the Supreme Court held that: “In my opinion, judgment in N. Radhakrishnan (supra) is per incuriam on two grounds: Firstly, the judgment in Hindustan Petroleum Corpn. Ltd. (supra) though referred has not been distinguished but at the same time is not followed also. The judgment in P. Anand Gajapathi Raju and Ors. (supra) was not even brought to the notice of this Court. Therefore, the same has neither been followed nor considered. Secondly, the provision contained in Section 16 of the Arbitration Act, 1996 were also not brought to the notice by this Court. Therefore, in my opinion, the judgment in N. Radhakrishnan (supra) does not lay down the correct law and can not be relied upon. ”

A new angle- does fraud vitiate the arbitration agreement? Bharat Rasiklal v. Gautam Rasiklal: (2012) 2 SCC 144 (2 judge bench)- Maestro line regarding arbitrability not adopted. Test adopted in this case is whether fraud vitiates the existence of arbitration agreement and if so, there can be no reference to arbitration. “Where agreements have been performed in part, such a contention will not be entertained. It is only in a very few cases, where an agreement which had not seen the light of the day is suddenly propounded, or where the agreement had never been acted upon or where sufficient circumstances exist to doubt the genuineness of the agreement, the Chief Justice of his designate will examine this issue. ” Andritz oy v. Enmas Engineering(p) Ltd, 2007 (3) ARBLR 545 Madras

Parallel Line - Section 45 Case World Sport Group (Mauritius) Ltd. v. MSM Satellite (Singapore) Pte. Ltd. , (2014) 11 SCC 639, the Supreme Court held that: “N. Radhakrishnan v. Maestro Engineers and Ors. (supra) and Abdul Kadir Shamsuddin Bubere v. Madhav Prabhakar Oak (supra) were decisions rendered in the context of domestic arbitration and not in the context of arbitrations under the New York Convention to which Section 45 of the Act applies. In the case of such arbitrations covered by the New York Convention, the Court can decline to make a reference of a dispute covered by the arbitration agreement only if it comes to the conclusion that the arbitration agreement is null and void, inoperative or incapable of being performed, and not on the ground that allegations of fraud or misrepresentation have to be inquired into while deciding the disputes between the parties. ”

Law Commission Report No. 246 Amendment of Section 16 In section 16, After sub-section (6), insert sub-section “(7) The arbitral tribunal shall have the power to make an award or give a ruling notwithstanding that the dispute before it involves a serious question of law, complicated questions of fact or allegations of fraud, corruption etc. ” [NOTE: This amendment is proposed in the light of the Supreme Court decisions (e. g. N. Radhakrishnan v. Maestro Engineers, (2010) 1 SCC 72) which appear to denude an arbitral tribunal of the power to decide on issues of fraud etc. ]