Application of The Recovery Model in Clinical Practice 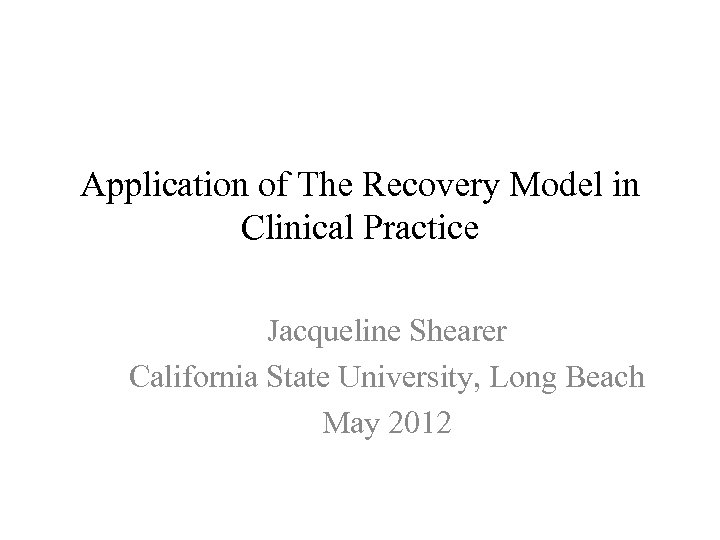 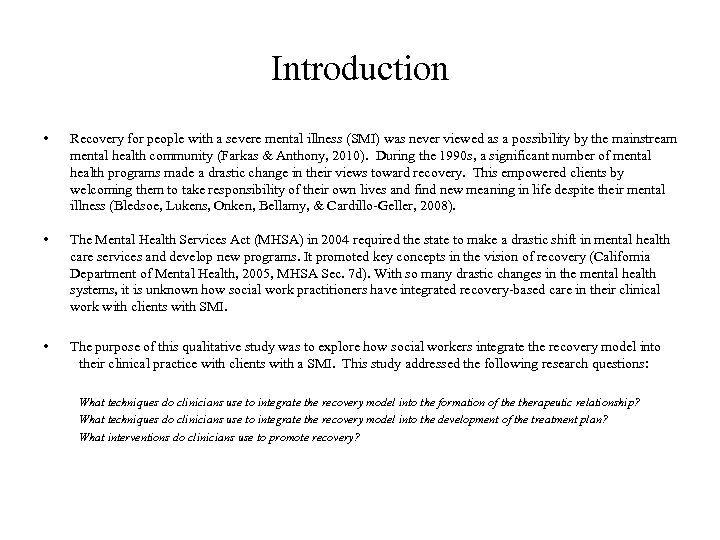 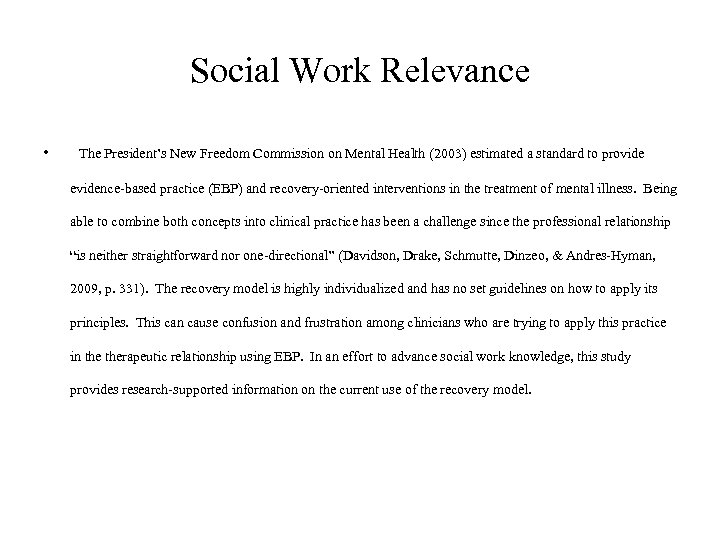 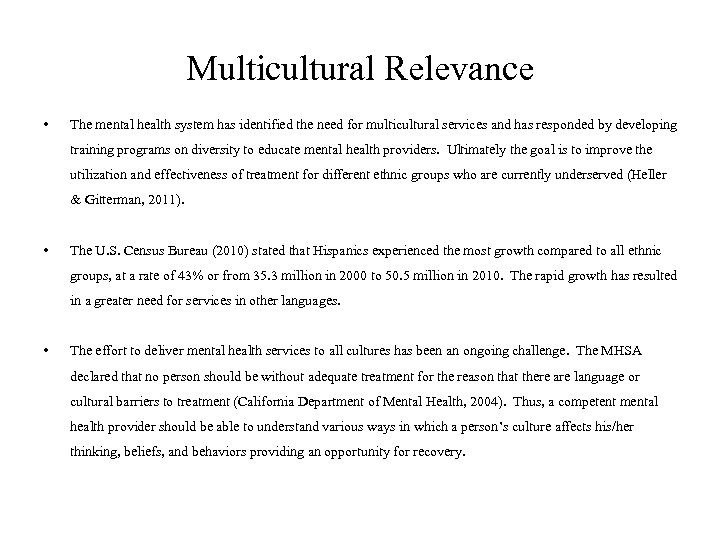 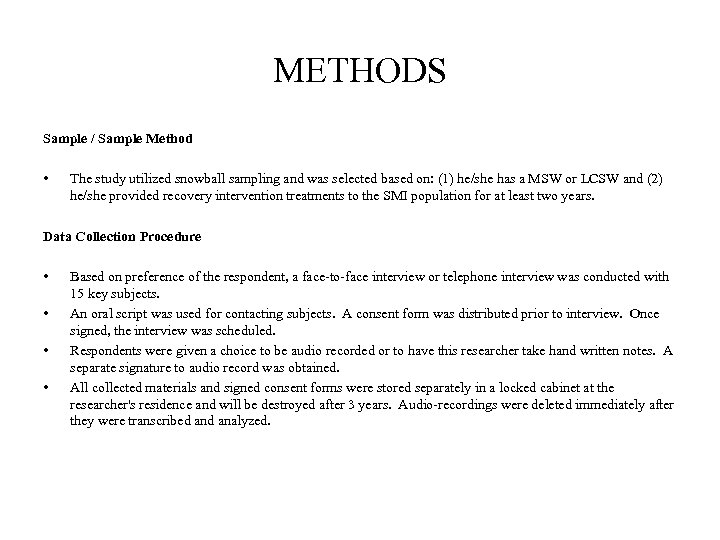 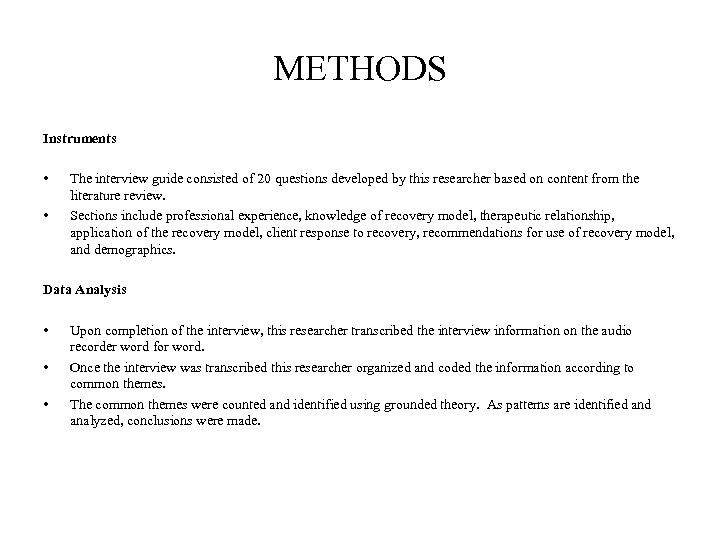 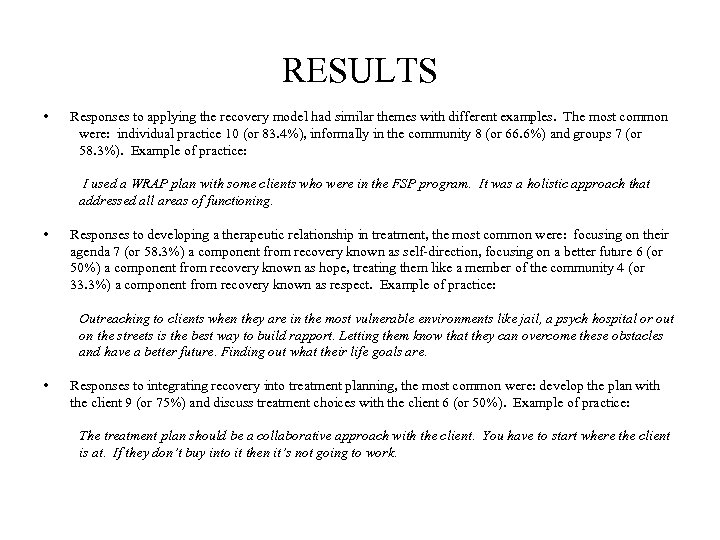 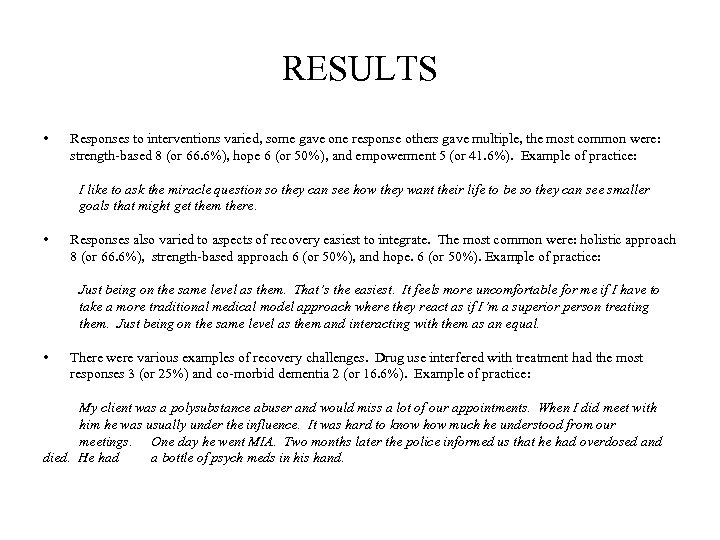 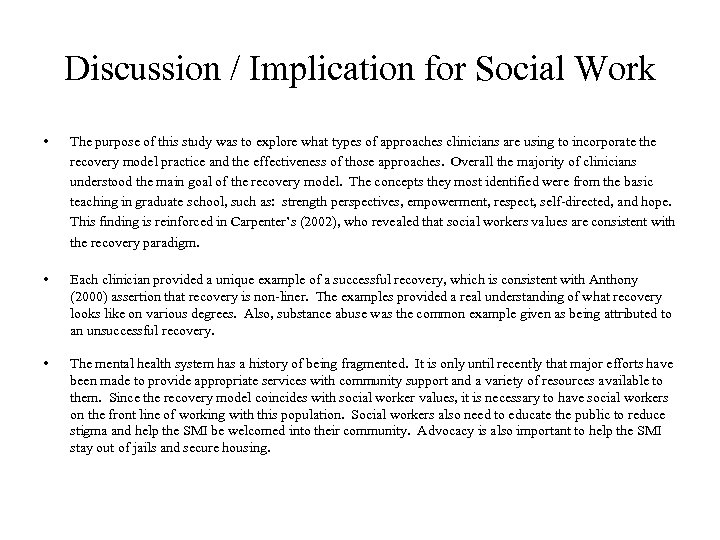 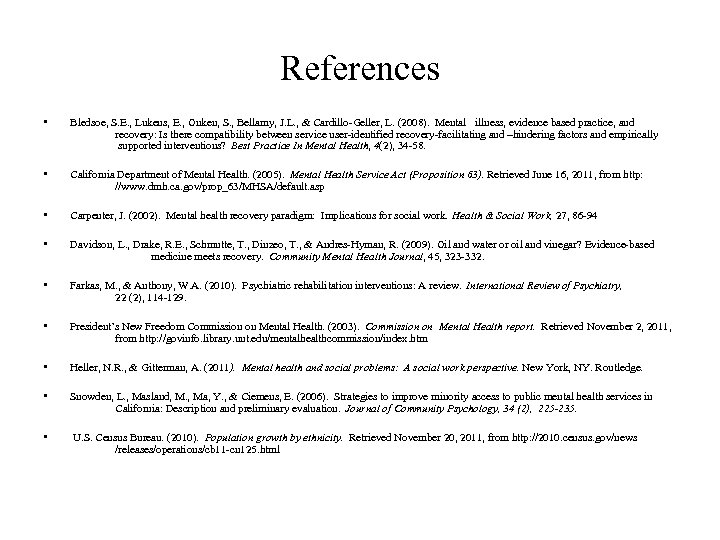 Скачать презентацию Application of The Recovery Model in Clinical Practice

Introduction • Recovery for people with a severe mental illness (SMI) was never viewed as a possibility by the mainstream mental health community (Farkas & Anthony, 2010). During the 1990 s, a significant number of mental health programs made a drastic change in their views toward recovery. This empowered clients by welcoming them to take responsibility of their own lives and find new meaning in life despite their mental illness (Bledsoe, Lukens, Onken, Bellamy, & Cardillo-Geller, 2008). • The Mental Health Services Act (MHSA) in 2004 required the state to make a drastic shift in mental health care services and develop new programs. It promoted key concepts in the vision of recovery (California Department of Mental Health, 2005, MHSA Sec. 7 d). With so many drastic changes in the mental health systems, it is unknown how social work practitioners have integrated recovery-based care in their clinical work with clients with SMI. • The purpose of this qualitative study was to explore how social workers integrate the recovery model into their clinical practice with clients with a SMI. This study addressed the following research questions: What techniques do clinicians use to integrate the recovery model into the formation of therapeutic relationship? What techniques do clinicians use to integrate the recovery model into the development of the treatment plan? What interventions do clinicians use to promote recovery?

Social Work Relevance • The President’s New Freedom Commission on Mental Health (2003) estimated a standard to provide evidence-based practice (EBP) and recovery-oriented interventions in the treatment of mental illness. Being able to combine both concepts into clinical practice has been a challenge since the professional relationship “is neither straightforward nor one-directional” (Davidson, Drake, Schmutte, Dinzeo, & Andres-Hyman, 2009, p. 331). The recovery model is highly individualized and has no set guidelines on how to apply its principles. This can cause confusion and frustration among clinicians who are trying to apply this practice in therapeutic relationship using EBP. In an effort to advance social work knowledge, this study provides research-supported information on the current use of the recovery model.

Multicultural Relevance • The mental health system has identified the need for multicultural services and has responded by developing training programs on diversity to educate mental health providers. Ultimately the goal is to improve the utilization and effectiveness of treatment for different ethnic groups who are currently underserved (Heller & Gitterman, 2011). • The U. S. Census Bureau (2010) stated that Hispanics experienced the most growth compared to all ethnic groups, at a rate of 43% or from 35. 3 million in 2000 to 50. 5 million in 2010. The rapid growth has resulted in a greater need for services in other languages. • The effort to deliver mental health services to all cultures has been an ongoing challenge. The MHSA declared that no person should be without adequate treatment for the reason that there are language or cultural barriers to treatment (California Department of Mental Health, 2004). Thus, a competent mental health provider should be able to understand various ways in which a person’s culture affects his/her thinking, beliefs, and behaviors providing an opportunity for recovery.

METHODS Sample / Sample Method • The study utilized snowball sampling and was selected based on: (1) he/she has a MSW or LCSW and (2) he/she provided recovery intervention treatments to the SMI population for at least two years. Data Collection Procedure • • Based on preference of the respondent, a face-to-face interview or telephone interview was conducted with 15 key subjects. An oral script was used for contacting subjects. A consent form was distributed prior to interview. Once signed, the interview was scheduled. Respondents were given a choice to be audio recorded or to have this researcher take hand written notes. A separate signature to audio record was obtained. All collected materials and signed consent forms were stored separately in a locked cabinet at the researcher's residence and will be destroyed after 3 years. Audio-recordings were deleted immediately after they were transcribed analyzed.

RESULTS • Responses to applying the recovery model had similar themes with different examples. The most common were: individual practice 10 (or 83. 4%), informally in the community 8 (or 66. 6%) and groups 7 (or 58. 3%). Example of practice: I used a WRAP plan with some clients who were in the FSP program. It was a holistic approach that addressed all areas of functioning. • Responses to developing a therapeutic relationship in treatment, the most common were: focusing on their agenda 7 (or 58. 3%) a component from recovery known as self-direction, focusing on a better future 6 (or 50%) a component from recovery known as hope, treating them like a member of the community 4 (or 33. 3%) a component from recovery known as respect. Example of practice: Outreaching to clients when they are in the most vulnerable environments like jail, a psych hospital or out on the streets is the best way to build rapport. Letting them know that they can overcome these obstacles and have a better future. Finding out what their life goals are. • Responses to integrating recovery into treatment planning, the most common were: develop the plan with the client 9 (or 75%) and discuss treatment choices with the client 6 (or 50%). Example of practice: The treatment plan should be a collaborative approach with the client. You have to start where the client is at. If they don’t buy into it then it’s not going to work.

RESULTS • Responses to interventions varied, some gave one response others gave multiple, the most common were: strength-based 8 (or 66. 6%), hope 6 (or 50%), and empowerment 5 (or 41. 6%). Example of practice: I like to ask the miracle question so they can see how they want their life to be so they can see smaller goals that might get them there. • Responses also varied to aspects of recovery easiest to integrate. The most common were: holistic approach 8 (or 66. 6%), strength-based approach 6 (or 50%), and hope. 6 (or 50%). Example of practice: Just being on the same level as them. That’s the easiest. It feels more uncomfortable for me if I have to take a more traditional medical model approach where they react as if I’m a superior person treating them. Just being on the same level as them and interacting with them as an equal. • There were various examples of recovery challenges. Drug use interfered with treatment had the most responses 3 (or 25%) and co-morbid dementia 2 (or 16. 6%). Example of practice: My client was a polysubstance abuser and would miss a lot of our appointments. When I did meet with him he was usually under the influence. It was hard to know how much he understood from our meetings. One day he went MIA. Two months later the police informed us that he had overdosed and died. He had a bottle of psych meds in his hand.

Discussion / Implication for Social Work • The purpose of this study was to explore what types of approaches clinicians are using to incorporate the recovery model practice and the effectiveness of those approaches. Overall the majority of clinicians understood the main goal of the recovery model. The concepts they most identified were from the basic teaching in graduate school, such as: strength perspectives, empowerment, respect, self-directed, and hope. This finding is reinforced in Carpenter’s (2002), who revealed that social workers values are consistent with the recovery paradigm. • Each clinician provided a unique example of a successful recovery, which is consistent with Anthony (2000) assertion that recovery is non-liner. The examples provided a real understanding of what recovery looks like on various degrees. Also, substance abuse was the common example given as being attributed to an unsuccessful recovery. • The mental health system has a history of being fragmented. It is only until recently that major efforts have been made to provide appropriate services with community support and a variety of resources available to them. Since the recovery model coincides with social worker values, it is necessary to have social workers on the front line of working with this population. Social workers also need to educate the public to reduce stigma and help the SMI be welcomed into their community. Advocacy is also important to help the SMI stay out of jails and secure housing.