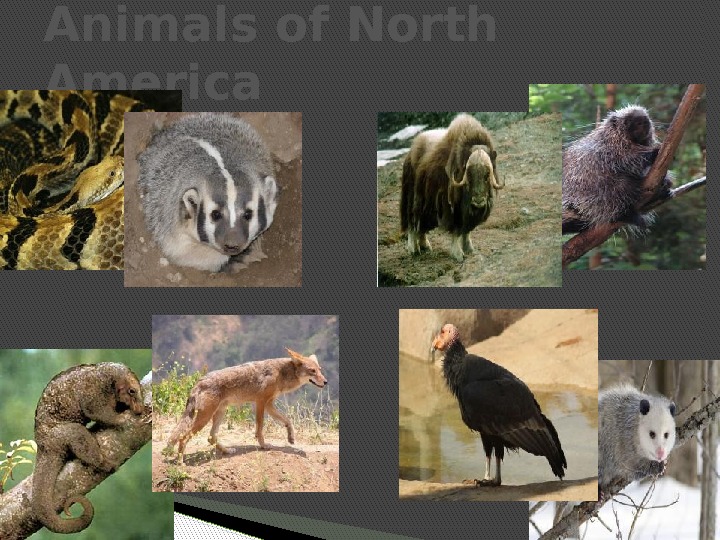 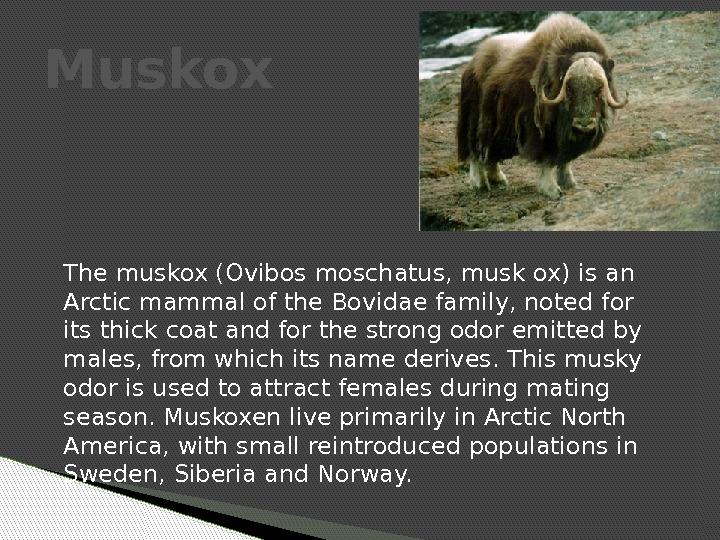 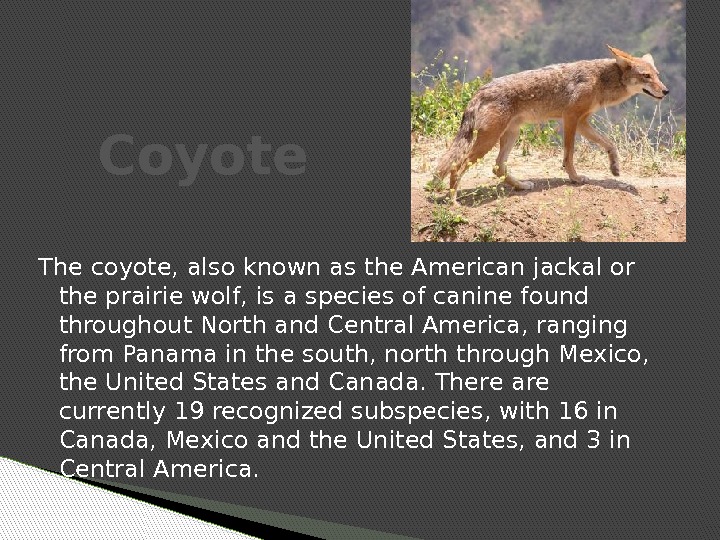 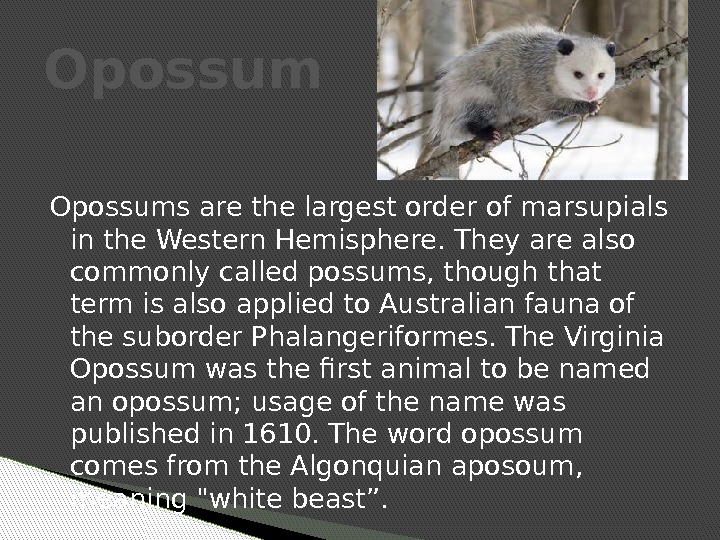 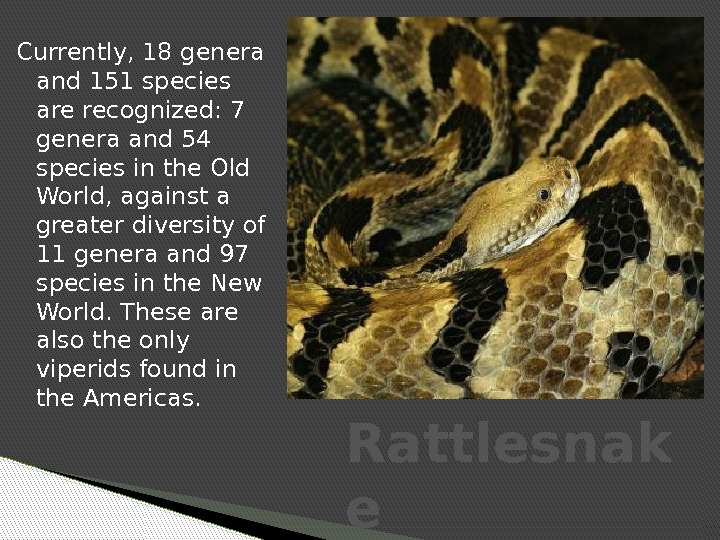 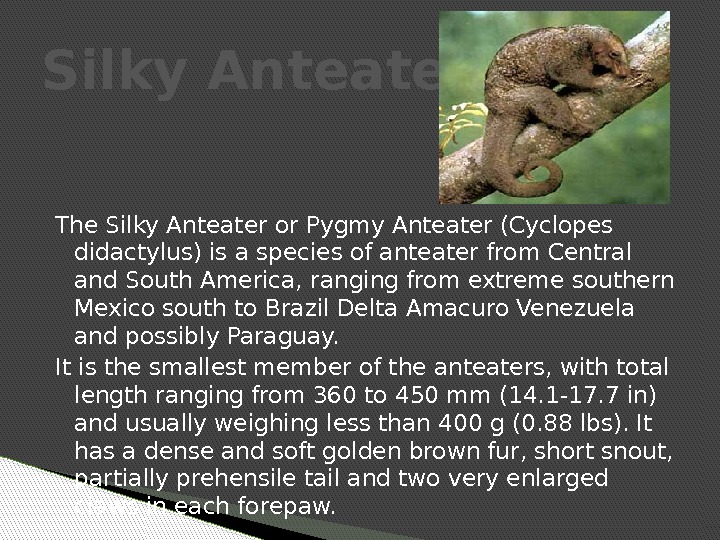 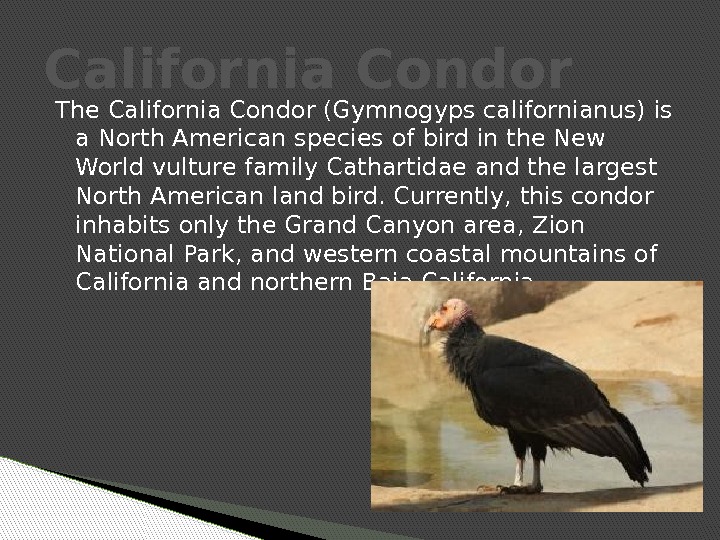 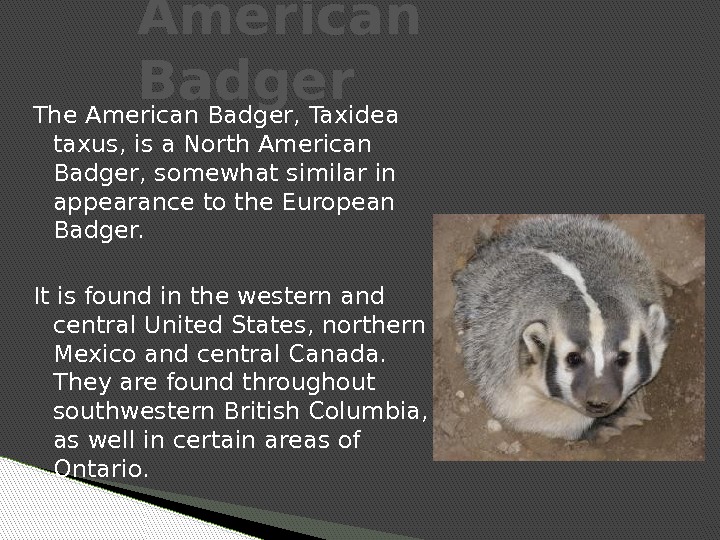 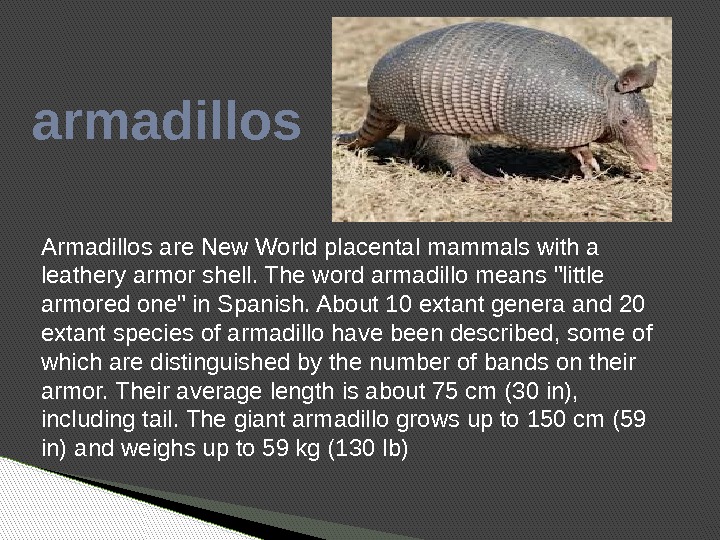 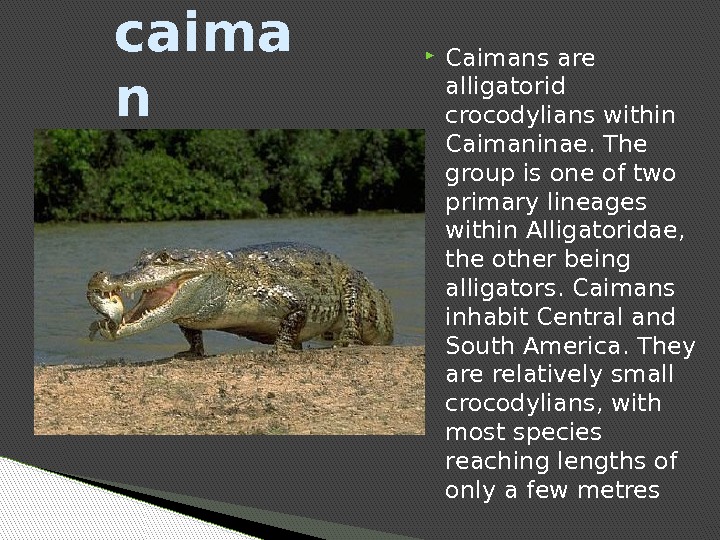 Muskox The muskox (Ovibos moschatus, musk ox) is an Arctic mammal of the Bovidae family, noted for its thick coat and for the strong odor emitted by males, from which its name derives. This musky odor is used to attract females during mating season. Muskoxen live primarily in Arctic North America, with small reintroduced populations in Sweden, Siberia and Norway.

The coyote, also known as the American jackal or the prairie wolf, is a species of canine found throughout North and Central America, ranging from Panama in the south, north through Mexico, the United States and Canada. There are currently 19 recognized subspecies, with 16 in Canada, Mexico and the United States, and 3 in Central America. Coyote

Opossums are the largest order of marsupials in the Western Hemisphere. They are also commonly called possums, though that term is also applied to Australian fauna of the suborder Phalangeriformes. The Virginia Opossum was the first animal to be named an opossum; usage of the name was published in 1610. The word opossum comes from the Algonquian aposoum, meaning «white beast”. Opossum

The Silky Anteater or Pygmy Anteater (Cyclopes didactylus) is a species of anteater from Central and South America, ranging from extreme southern Mexico south to Brazil Delta Amacuro Venezuela and possibly Paraguay. It is the smallest member of the anteaters, with total length ranging from 360 to 450 mm (14. 1 -17. 7 in) and usually weighing less than 400 g (0. 88 lbs). It has a dense and soft golden brown fur, short snout, partially prehensile tail and two very enlarged claws in each forepaw. Silky Anteater

armadillos Armadillos are New World placental mammals with a leathery armor shell. The word armadillo means «little armored one» in Spanish. About 10 extant genera and 20 extant species of armadillo have been described, some of which are distinguished by the number of bands on their armor. Their average length is about 75 cm (30 in), including tail. The giant armadillo grows up to 150 cm (59 in) and weighs up to 59 kg (130 lb)

Caimans are alligatorid crocodylians within Caimaninae. The group is one of two primary lineages within Alligatoridae, the other being alligators. Caimans inhabit Central and South America. They are relatively small crocodylians, with most species reaching lengths of only a few metrescaima n