An Introduction to Language and Linguistics Chapter 9 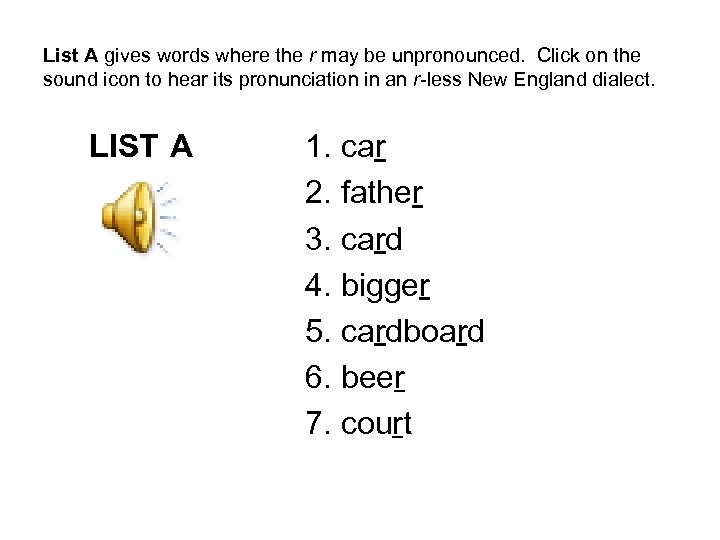 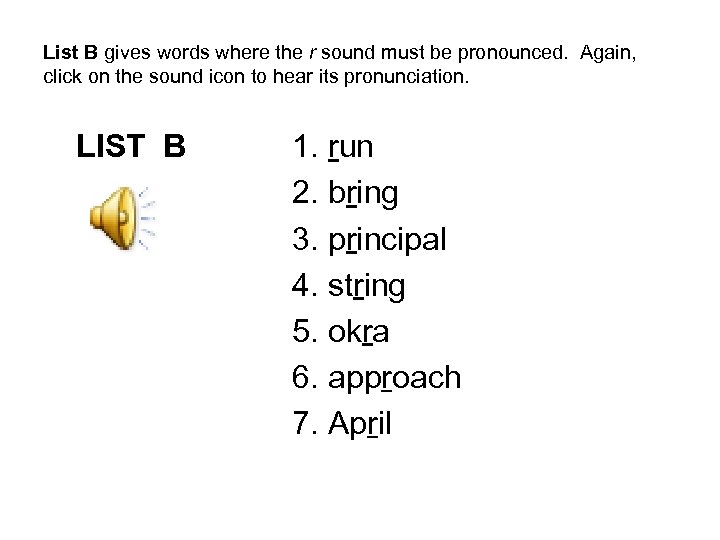 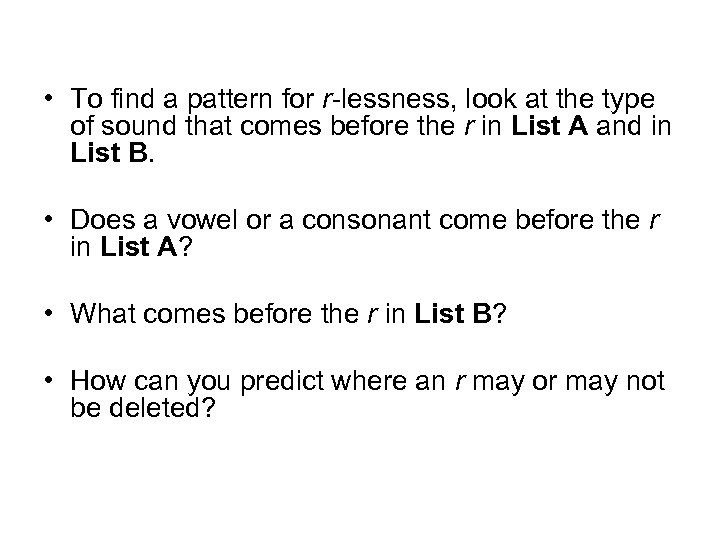 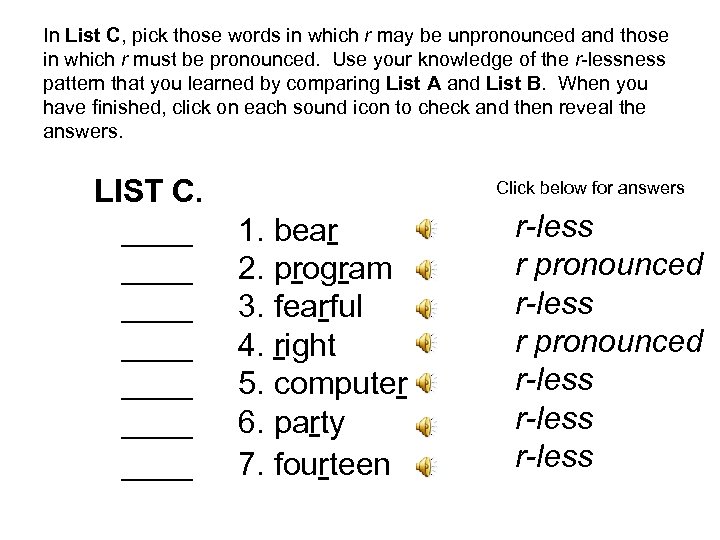 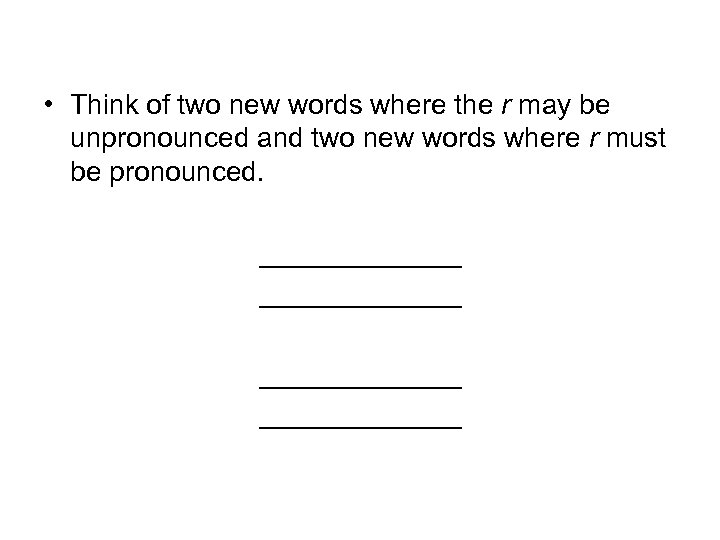 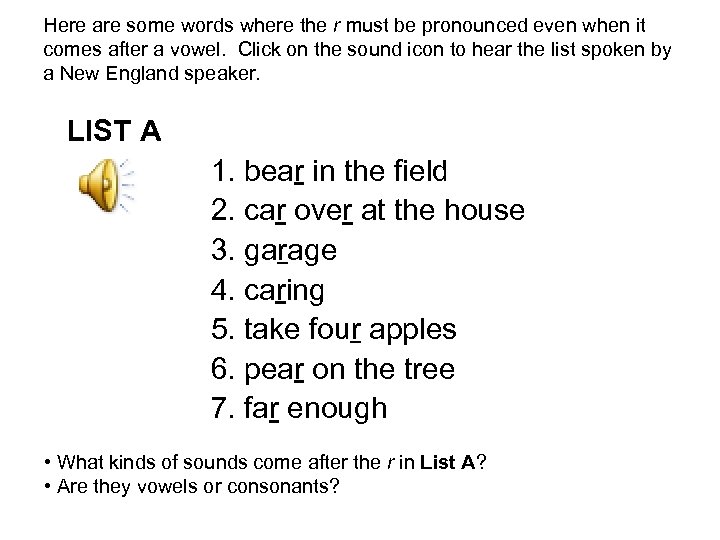 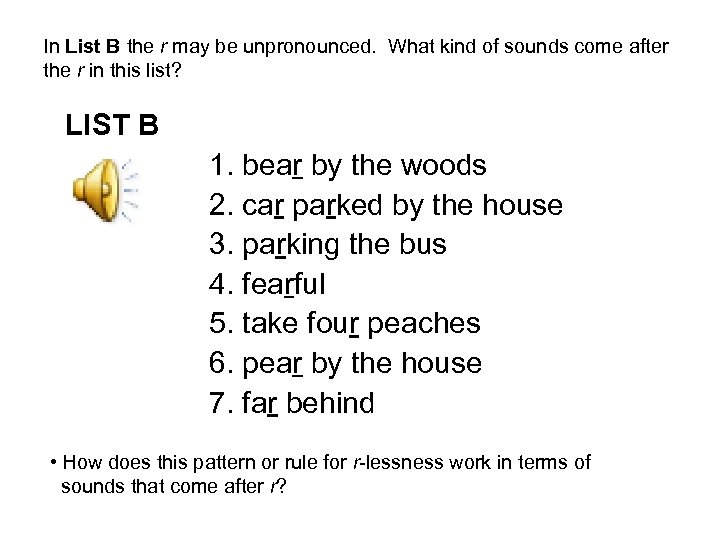 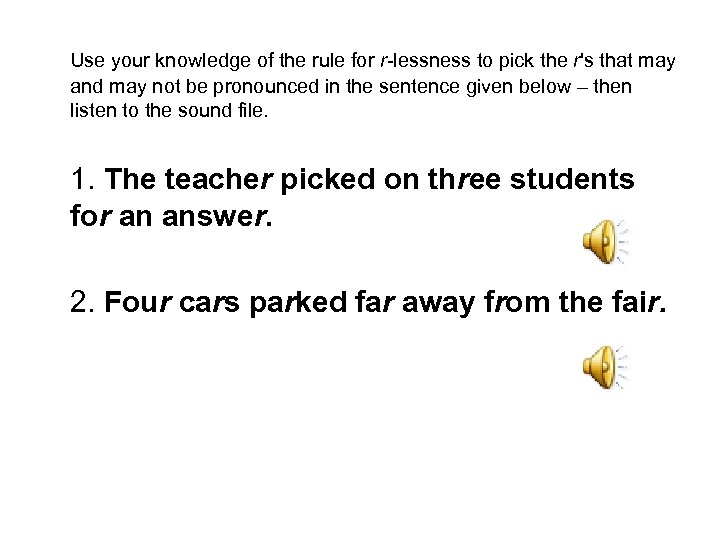 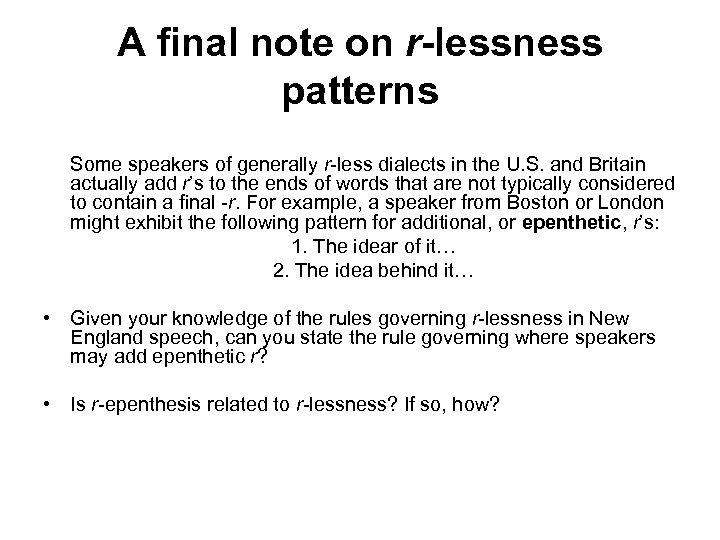 Скачать презентацию An Introduction to Language and Linguistics Chapter 9

An Introduction to Language and Linguistics Chapter 9 Dialect Variation by Natalie Schilling-Estes EXERCISE 1 New England r-lessness (adapted by permission from Walt Wolfram) In New England a number of other dialects of English, the r sound in words like car or poor may be reduced to a vowel sound or not pronounced at all, so that these words sound like [ca: ] and [poə]. This phenomenon is sometimes called r-lessness. However, it is not the case in r-less dialects that all r’s are unpronounced. Instead, r is not pronounced in certain places in words but is pronounced in others. By comparing lists of words where the r may be unpronounced with lists of words where it may be pronounced, we can figure out a pattern for r-lessness. www. cambridge. org/fasold © Cambridge University Press

List A gives words where the r may be unpronounced. Click on the sound icon to hear its pronunciation in an r-less New England dialect. LIST A 1. car 2. father 3. card 4. bigger 5. cardboard 6. beer 7. court

List B gives words where the r sound must be pronounced. Again, click on the sound icon to hear its pronunciation. LIST B 1. run 2. bring 3. principal 4. string 5. okra 6. approach 7. April

In List C, pick those words in which r may be unpronounced and those in which r must be pronounced. Use your knowledge of the r-lessness pattern that you learned by comparing List A and List B. When you have finished, click on each sound icon to check and then reveal the answers. LIST C. ____ ____ Click below for answers 1. bear 2. program 3. fearful 4. right 5. computer 6. party 7. fourteen r-less r pronounced r-less

More about r-lessness patterns We have just seen that r-lessness only takes place when the r is preceded by a vowel. Now we are going to look at the kinds of sounds that may come after the r in some dialects of English. Let's see if we can figure out the pattern.

Here are some words where the r must be pronounced even when it comes after a vowel. Click on the sound icon to hear the list spoken by a New England speaker. LIST A 1. bear in the field 2. car over at the house 3. garage 4. caring 5. take four apples 6. pear on the tree 7. far enough • What kinds of sounds come after the r in List A? • Are they vowels or consonants?

In List B the r may be unpronounced. What kind of sounds come after the r in this list? LIST B 1. bear by the woods 2. car parked by the house 3. parking the bus 4. fearful 5. take four peaches 6. pear by the house 7. far behind • How does this pattern or rule for r-lessness work in terms of sounds that come after r?

Use your knowledge of the rule for r-lessness to pick the r's that may and may not be pronounced in the sentence given below – then listen to the sound file. 1. The teacher picked on three students for an answer. 2. Four cars parked far away from the fair.

A final note on r-lessness patterns Some speakers of generally r-less dialects in the U. S. and Britain actually add r’s to the ends of words that are not typically considered to contain a final -r. For example, a speaker from Boston or London might exhibit the following pattern for additional, or epenthetic, r’s: 1. The idear of it… 2. The idea behind it… • Given your knowledge of the rules governing r-lessness in New England speech, can you state the rule governing where speakers may add epenthetic r? • Is r-epenthesis related to r-lessness? If so, how?