An evaluation of the objectives and learning outcomes 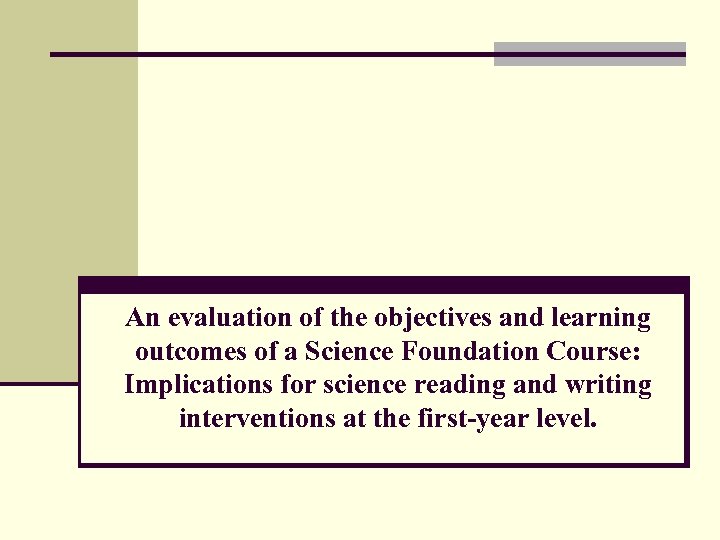 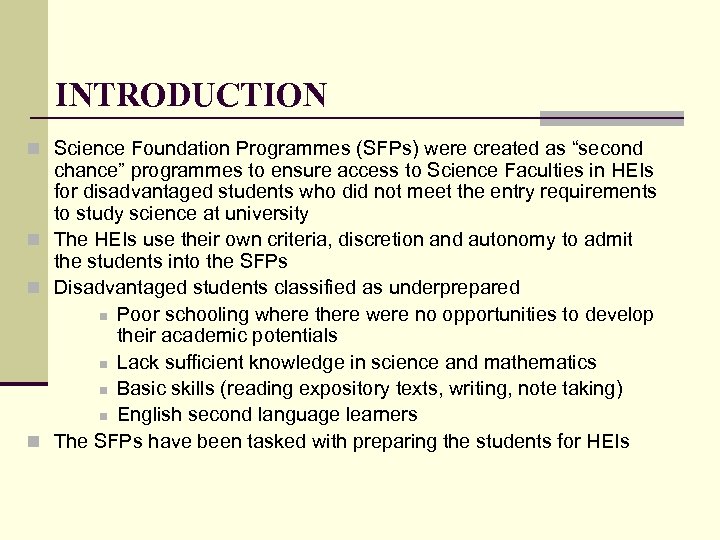 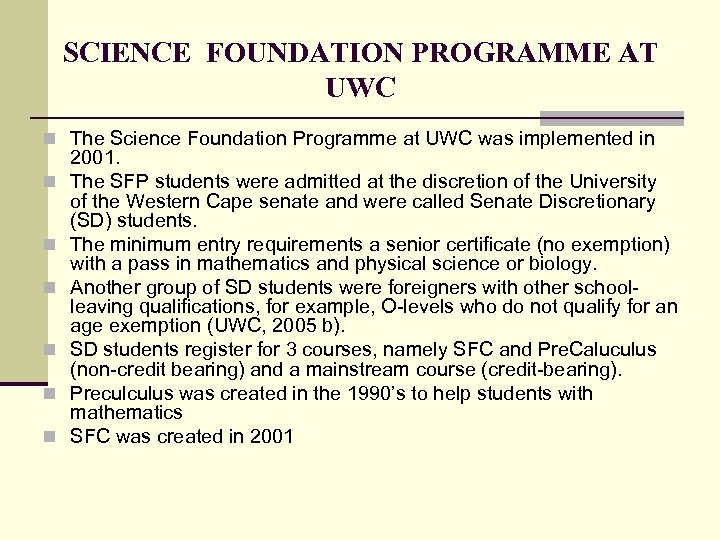 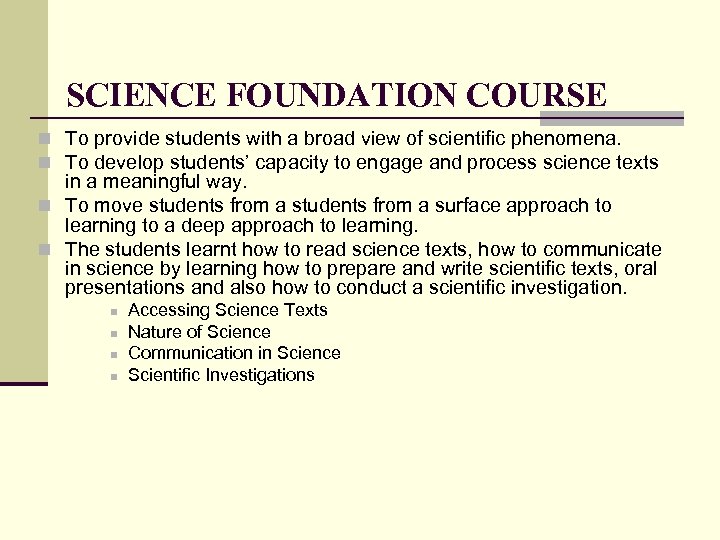 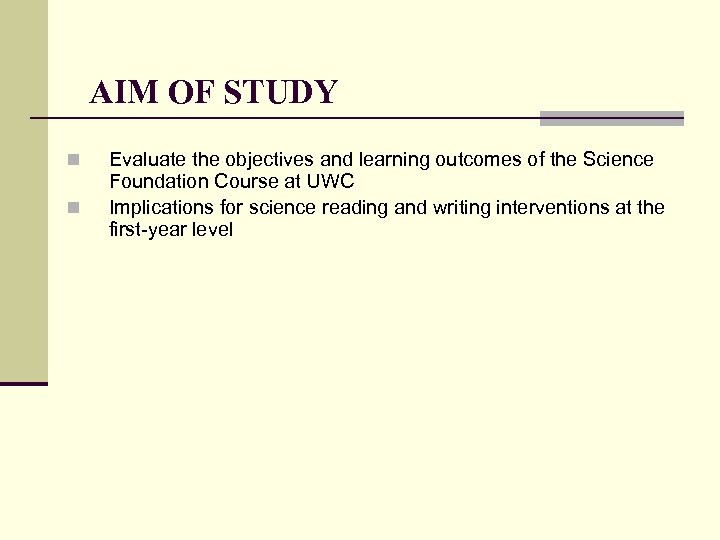 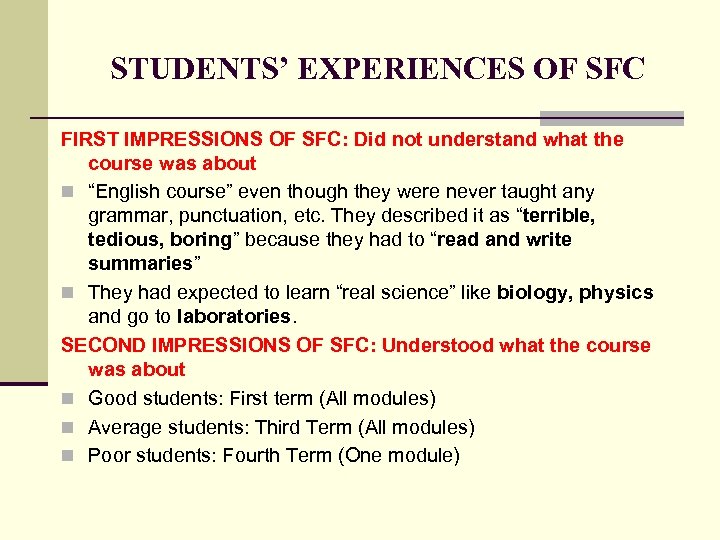 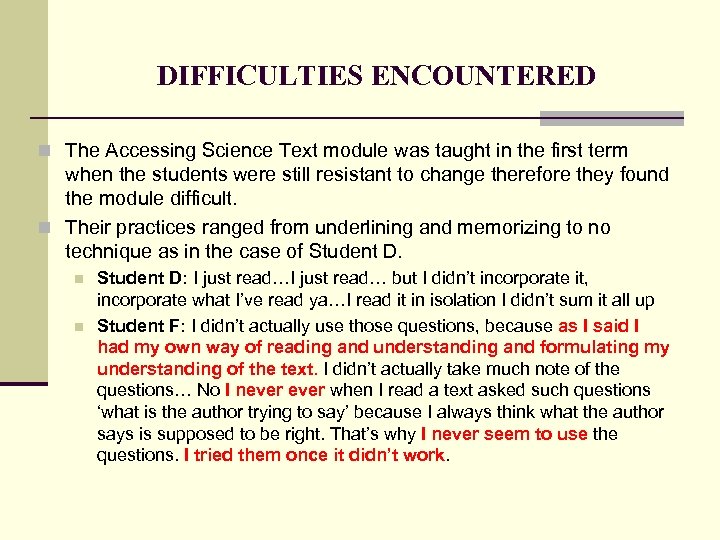 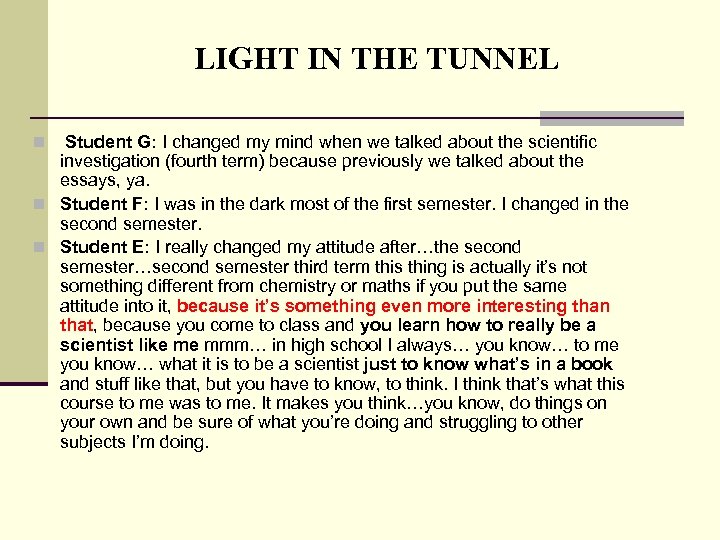 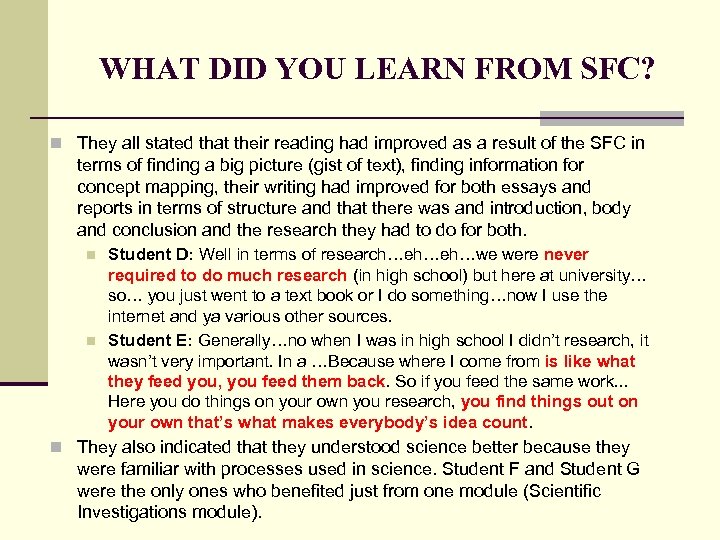 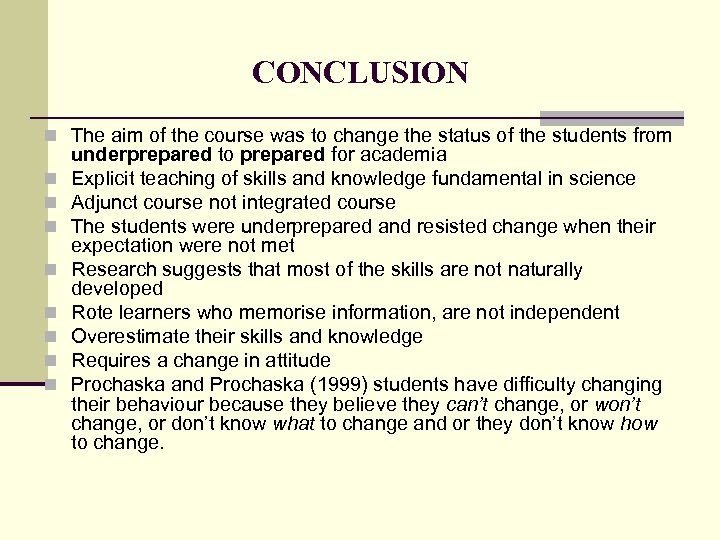 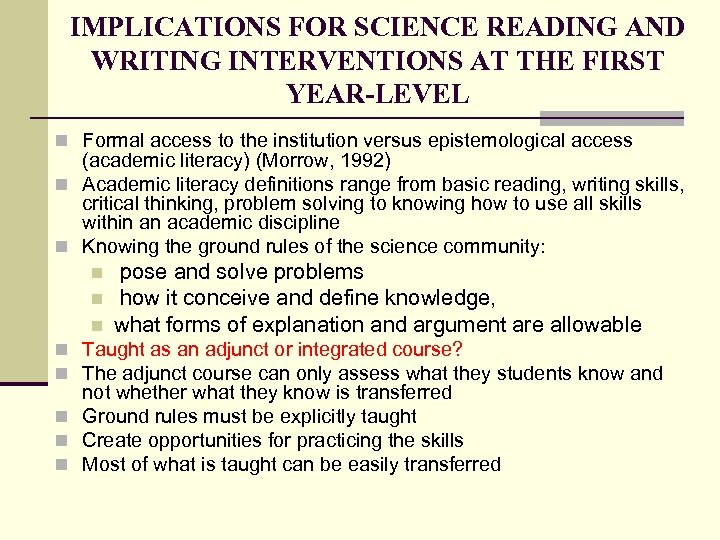 Скачать презентацию An evaluation of the objectives and learning outcomes

An evaluation of the objectives and learning outcomes of a Science Foundation Course: Implications for science reading and writing interventions at the first-year level.

INTRODUCTION n Science Foundation Programmes (SFPs) were created as “second chance” programmes to ensure access to Science Faculties in HEIs for disadvantaged students who did not meet the entry requirements to study science at university n The HEIs use their own criteria, discretion and autonomy to admit the students into the SFPs n Disadvantaged students classified as underprepared n Poor schooling where there were no opportunities to develop their academic potentials n Lack sufficient knowledge in science and mathematics n Basic skills (reading expository texts, writing, note taking) n English second language learners n The SFPs have been tasked with preparing the students for HEIs

SCIENCE FOUNDATION PROGRAMME AT UWC n The Science Foundation Programme at UWC was implemented in n n n 2001. The SFP students were admitted at the discretion of the University of the Western Cape senate and were called Senate Discretionary (SD) students. The minimum entry requirements a senior certificate (no exemption) with a pass in mathematics and physical science or biology. Another group of SD students were foreigners with other schoolleaving qualifications, for example, O-levels who do not qualify for an age exemption (UWC, 2005 b). SD students register for 3 courses, namely SFC and Pre. Caluculus (non-credit bearing) and a mainstream course (credit-bearing). Preculculus was created in the 1990’s to help students with mathematics SFC was created in 2001

SCIENCE FOUNDATION COURSE n To provide students with a broad view of scientific phenomena. n To develop students’ capacity to engage and process science texts in a meaningful way. n To move students from a surface approach to learning to a deep approach to learning. n The students learnt how to read science texts, how to communicate in science by learning how to prepare and write scientific texts, oral presentations and also how to conduct a scientific investigation. n n Accessing Science Texts Nature of Science Communication in Science Scientific Investigations

n Evaluation entails determining the worth or value of something n Evaluation measure expected outcomes and unexpected n n n n outcomes Expected outcomes: what the students learnt Unexpected outcomes: what the students experience was and how it may have affected their performance what they expected to learn, what they learnt, how they would judge the Science Foundation Course Interviews from 7 students divided into 3 groups (good, average and poor performers) after completing the course Good performers : 60 – 100% Average performers: 50 – 59% Poor performers: Below 50%

STUDENTS’ EXPERIENCES OF SFC FIRST IMPRESSIONS OF SFC: Did not understand what the course was about n “English course” even though they were never taught any grammar, punctuation, etc. They described it as “terrible, tedious, boring” because they had to “read and write summaries” n They had expected to learn “real science” like biology, physics and go to laboratories. SECOND IMPRESSIONS OF SFC: Understood what the course was about n Good students: First term (All modules) n Average students: Third Term (All modules) n Poor students: Fourth Term (One module)

DIFFICULTIES ENCOUNTERED n The Accessing Science Text module was taught in the first term when the students were still resistant to change therefore they found the module difficult. n Their practices ranged from underlining and memorizing to no technique as in the case of Student D. n n Student D: I just read… but I didn’t incorporate it, incorporate what I’ve read ya…I read it in isolation I didn’t sum it all up Student F: I didn’t actually use those questions, because as I said I had my own way of reading and understanding and formulating my understanding of the text. I didn’t actually take much note of the questions… No I never when I read a text asked such questions ‘what is the author trying to say’ because I always think what the author says is supposed to be right. That’s why I never seem to use the questions. I tried them once it didn’t work.

LIGHT IN THE TUNNEL Student G: I changed my mind when we talked about the scientific investigation (fourth term) because previously we talked about the essays, ya. n Student F: I was in the dark most of the first semester. I changed in the second semester. n Student E: I really changed my attitude after…the second semester…second semester third term this thing is actually it’s not something different from chemistry or maths if you put the same attitude into it, because it’s something even more interesting than that, because you come to class and you learn how to really be a scientist like me mmm… in high school I always… you know… to me you know… what it is to be a scientist just to know what’s in a book and stuff like that, but you have to know, to think. I think that’s what this course to me was to me. It makes you think…you know, do things on your own and be sure of what you’re doing and struggling to other subjects I’m doing. n

WHAT DID YOU LEARN FROM SFC? n They all stated that their reading had improved as a result of the SFC in terms of finding a big picture (gist of text), finding information for concept mapping, their writing had improved for both essays and reports in terms of structure and that there was and introduction, body and conclusion and the research they had to do for both. n n Student D: Well in terms of research…eh…eh…we were never required to do much research (in high school) but here at university… so… you just went to a text book or I do something…now I use the internet and ya various other sources. Student E: Generally…no when I was in high school I didn’t research, it wasn’t very important. In a …Because where I come from is like what they feed you, you feed them back. So if you feed the same work. . . Here you do things on your own you research, you find things out on your own that’s what makes everybody’s idea count. n They also indicated that they understood science better because they were familiar with processes used in science. Student F and Student G were the only ones who benefited just from one module (Scientific Investigations module).

CONCLUSION n The aim of the course was to change the status of the students from n n n n underprepared to prepared for academia Explicit teaching of skills and knowledge fundamental in science Adjunct course not integrated course The students were underprepared and resisted change when their expectation were not met Research suggests that most of the skills are not naturally developed Rote learners who memorise information, are not independent Overestimate their skills and knowledge Requires a change in attitude Prochaska and Prochaska (1999) students have difficulty changing their behaviour because they believe they can’t change, or won’t change, or don’t know what to change and or they don’t know how to change.

IMPLICATIONS FOR SCIENCE READING AND WRITING INTERVENTIONS AT THE FIRST YEAR-LEVEL n Formal access to the institution versus epistemological access (academic literacy) (Morrow, 1992) n Academic literacy definitions range from basic reading, writing skills, critical thinking, problem solving to knowing how to use all skills within an academic discipline n Knowing the ground rules of the science community: n n n pose and solve problems how it conceive and define knowledge, what forms of explanation and argument are allowable n Taught as an adjunct or integrated course? n The adjunct course can only assess what they students know and not whether what they know is transferred n Ground rules must be explicitly taught n Create opportunities for practicing the skills n Most of what is taught can be easily transferred