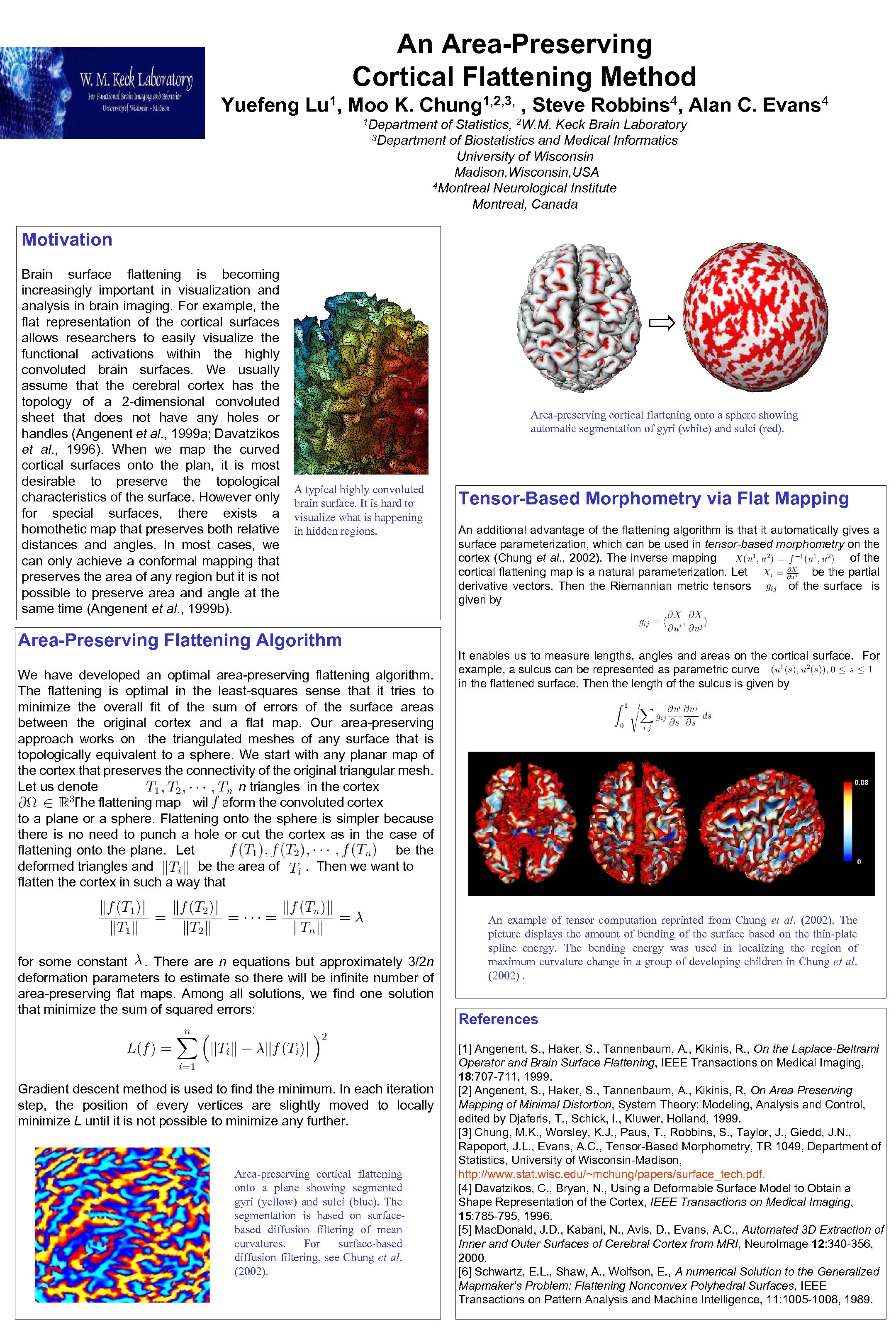 An Area-Preserving Cortical Flattening Method Yuefeng 1, Lu Moo K. 1, 2, 3, Chung , Steve 4, Robbins Alan C. 4 Evans 1 Department of Statistics, 2 W. M. Keck Brain Laboratory 3 Department of Biostatistics and Medical Informatics University of Wisconsin Madison, Wisconsin, USA 4 Montreal Neurological Institute Montreal, Canada Motivation Brain surface flattening is becoming increasingly important in visualization and analysis in brain imaging. For example, the flat representation of the cortical surfaces allows researchers to easily visualize the functional activations within the highly convoluted brain surfaces. We usually assume that the cerebral cortex has the topology of a 2 -dimensional convoluted sheet that does not have any holes or handles (Angenent et al. , 1999 a; Davatzikos et al. , 1996). When we map the curved cortical surfaces onto the plan, it is most desirable to preserve the topological characteristics of the surface. However only for special surfaces, there exists a homothetic map that preserves both relative distances and angles. In most cases, we can only achieve a conformal mapping that preserves the area of any region but it is not possible to preserve area and angle at the same time (Angenent et al. , 1999 b). age 16. 1. Area-preserving cortical flattening onto a sphere showing automatic segmentation of gyri (white) and sulci (red). A typical highly convoluted brain surface. It is hard to visualize what is happening in hidden regions. Area-Preserving Flattening Algorithm We have developed an optimal area-preserving flattening algorithm. The flattening is optimal in the least-squares sense that it tries to minimize the overall fit of the sum of errors of the surface areas between the original cortex and a flat map. Our area-preserving approach works on the triangulated meshes of any surface that is topologically equivalent to a sphere. We start with any planar map of the cortex that preserves the connectivity of the original triangular mesh. Let us denote to be n triangles in the cortex. The flattening map will deform the convoluted cortex to a plane or a sphere. Flattening onto the sphere is simpler because there is no need to punch a hole or cut the cortex as in the case of flattening onto the plane. Let be the deformed triangles and be the area of. Then we want to flatten the cortex in such a way that for some constant. There are n equations but approximately 3/2 n deformation parameters to estimate so there will be infinite number of area-preserving flat maps. Among all solutions, we find one solution that minimize the sum of squared errors: Gradient descent method is used to find the minimum. In each iteration step, the position of every vertices are slightly moved to locally minimize L until it is not possible to minimize any further. Area-preserving cortical flattening onto a plane showing segmented gyri (yellow) and sulci (blue). The segmentation is based on surfacebased diffusion filtering of mean curvatures. For surface-based diffusion filtering, see Chung et al. (2002). Tensor-Based Morphometry via Flat Mapping An additional advantage of the flattening algorithm is that it automatically gives a surface parameterization, which can be used in tensor-based morphometry on the cortex (Chung et al. , 2002). The inverse mapping of the cortical flattening map is a natural parameterization. Let be the partial derivative vectors. Then the Riemannian metric tensors of the surface is given by It enables us to measure lengths, angles and areas on the cortical surface. For example, a sulcus can be represented as parametric curve in the flattened surface. Then the length of the sulcus is given by An example of tensor computation reprinted from Chung et al. (2002). The picture displays the amount of bending of the surface based on the thin-plate spline energy. The bending energy was used in localizing the region of maximum curvature change in a group of developing children in Chung et al. (2002). References [1] Angenent, S. , Haker, S. , Tannenbaum, A. , Kikinis, R. , On the Laplace-Beltrami Operator and Brain Surface Flattening, IEEE Transactions on Medical Imaging, 18: 707 -711, 1999. [2] Angenent, S. , Haker, S. , Tannenbaum, A. , Kikinis, R, On Area Preserving Mapping of Minimal Distortion, System Theory: Modeling, Analysis and Control, edited by Djaferis, T. , Schick, I. , Kluwer, Holland, 1999. [3] Chung, M. K. , Worsley, K. J. , Paus, T. , Robbins, S. , Taylor, J. , Giedd, J. N. , Rapoport, J. L. , Evans, A. C. , Tensor-Based Morphometry, TR 1049, Department of Statistics, University of Wisconsin-Madison, http: //www. stat. wisc. edu/~mchung/papers/surface_tech. pdf. [4] Davatzikos, C. , Bryan, N. , Using a Deformable Surface Model to Obtain a Shape Representation of the Cortex, IEEE Transactions on Medical Imaging, 15: 785 -795, 1996. [5] Mac. Donald, J. D. , Kabani, N. , Avis, D. , Evans, A. C. , Automated 3 D Extraction of Inner and Outer Surfaces of Cerebral Cortex from MRI, Neuro. Image 12: 340 -356, 2000. [6] Schwartz, E. L. , Shaw, A. , Wolfson, E. , A numerical Solution to the Generalized Mapmaker’s Problem: Flattening Nonconvex Polyhedral Surfaces, IEEE Transactions on Pattern Analysis and Machine Intelligence, 11: 1005 -1008, 1989.