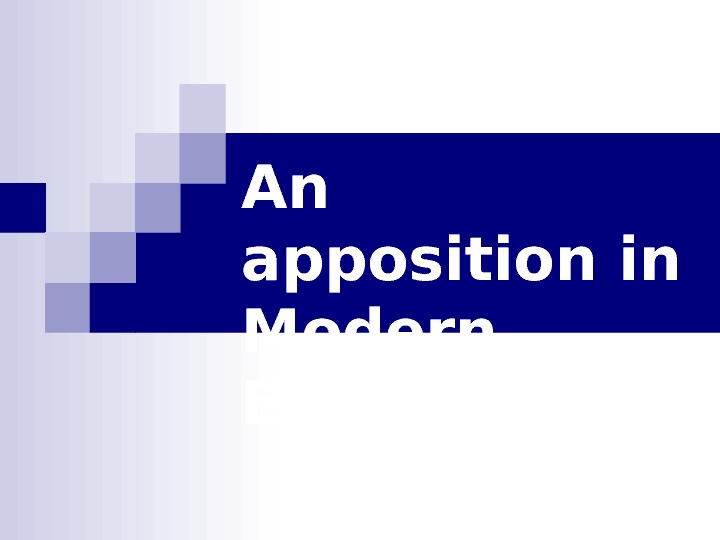 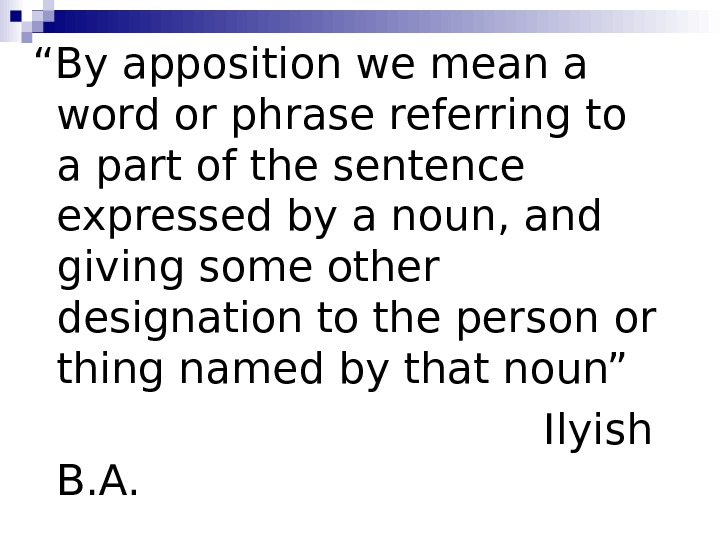 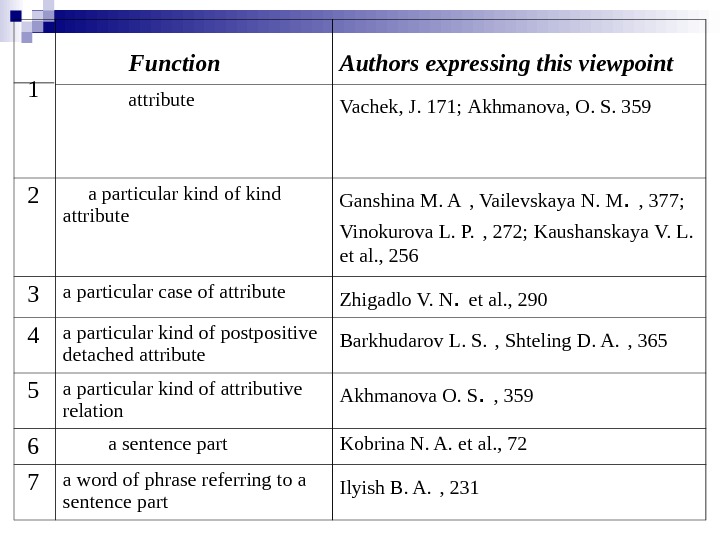 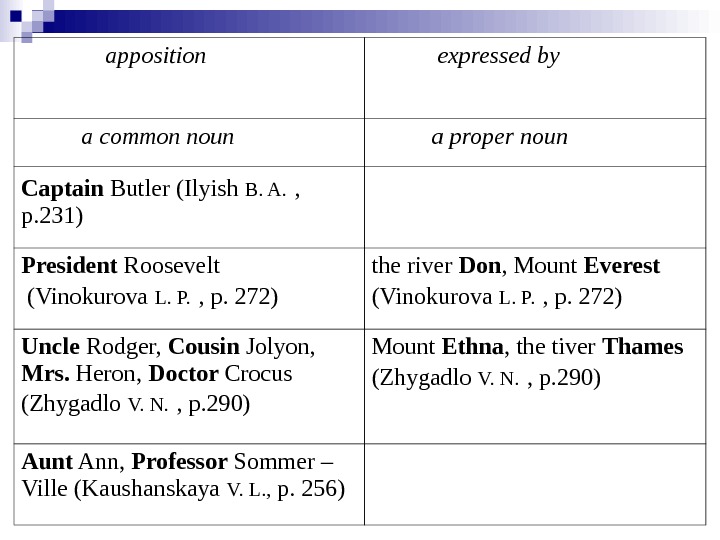 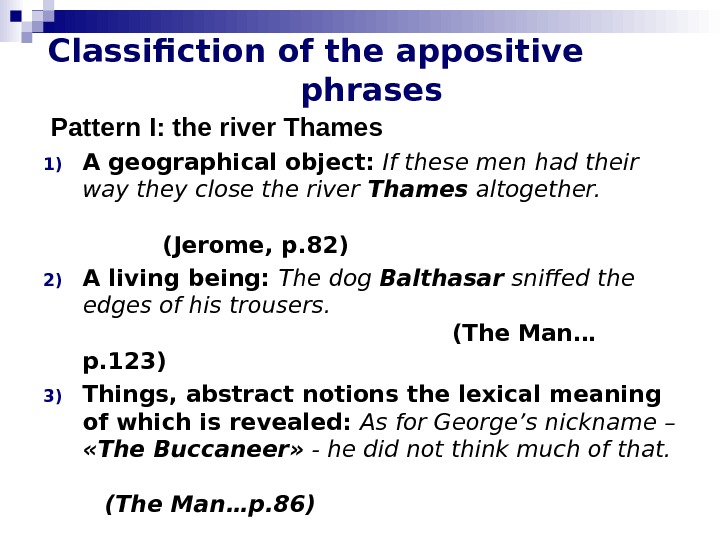 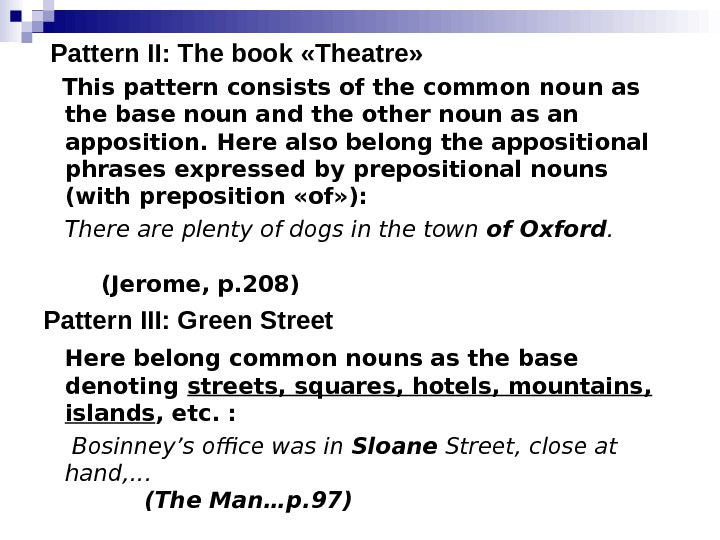 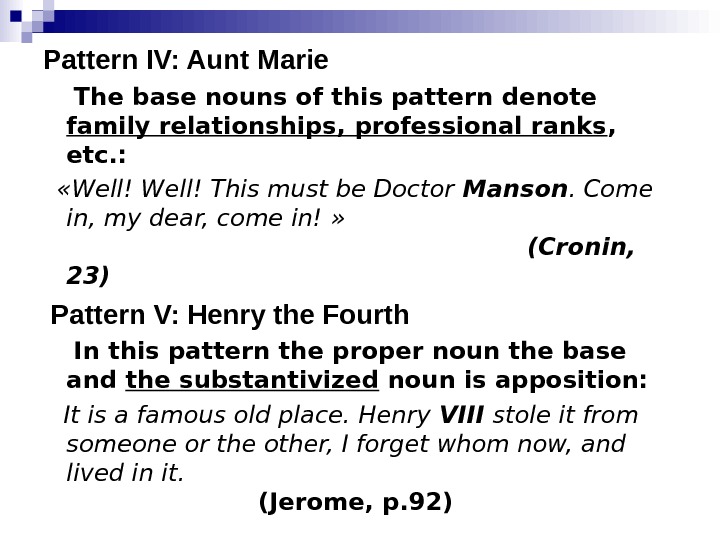 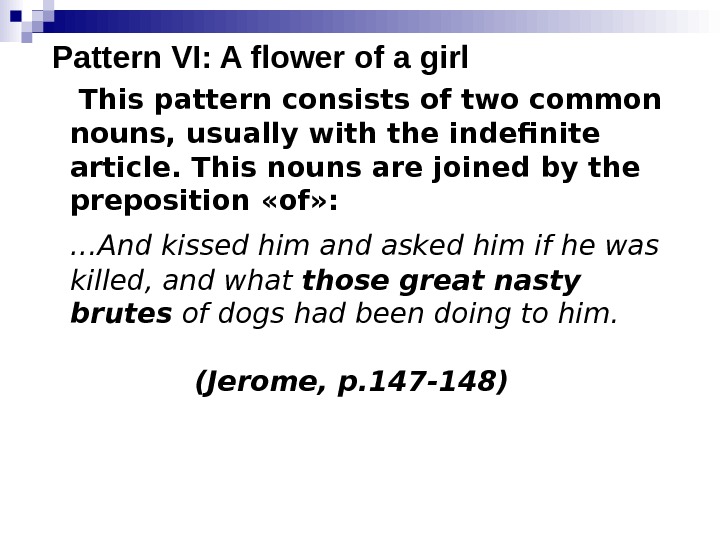 Скачать презентацию An apposition in Modern English “ By

Описание презентации An apposition in Modern English “ By по слайдам

An apposition in Modern English

“ By apposition we mean a word or phrase referring to a part of the sentence expressed by a noun, and giving some other designation to the person or thing named by that noun” Ilyish B. A.

Classifiction of the appositive phrases Pattern І: the river Thames 1) A geographical object: If these men had their way they close the river Thames altogether. (Jerome, p. 82) 2) A living being: The dog Balthasar sniffed the edges of his trousers. (The Man… p. 123) 3) Things, abstract notions the lexical meaning of which is revealed: As for George’s nickname – « The Buccaneer » — he did not think much of that. (The Man…p. 86)

Pattern ІІ : The book « Theatre » This pattern consists of the common noun as the base noun and the other noun as an apposition. Here also belong the appositional phrases expressed by prepositional nouns (with preposition « of » ): There are plenty of dogs in the town of Oxford. (Jerome, p. 208) Pattern ΙΙΙ: Green Street Here belong common nouns as the base denoting streets, squares, hotels, mountains, islands , etc. : Bosinney’s office was in Sloane Street, close at hand, … (The Man…p. 97)

Pattern ΙV: Aunt Marie The base nouns of this pattern denote family relationships, professional ranks , etc. : « Well! This must be Doctor Manson. Come in, my dear, come in! » (Cronin, 23) Pattern V: Henry the Fourth In this pattern the proper noun the base and the substantivized noun is apposition: It is a famous old place. Henry VIII stole it from someone or the other, I forget whom now, and lived in it. (Jerome, p. 92)

Pattern VI: A flower of a girl This pattern consists of two common nouns, usually with the indefinite article. This nouns are joined by the preposition « of » : … And kissed him and asked him if he was killed, and what those great nasty brutes of dogs had been doing to him. (Jerome, p. 147 -148)