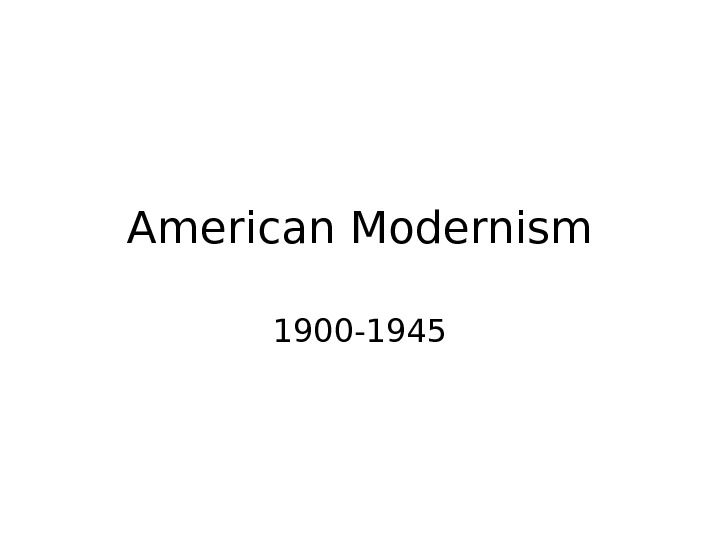 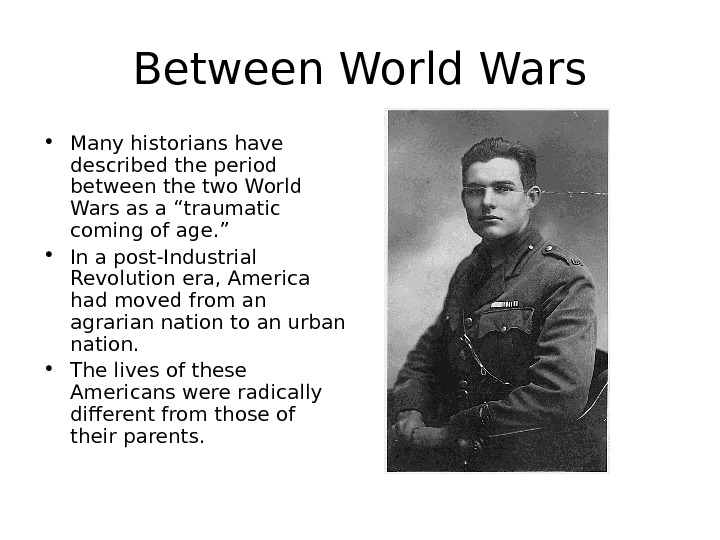 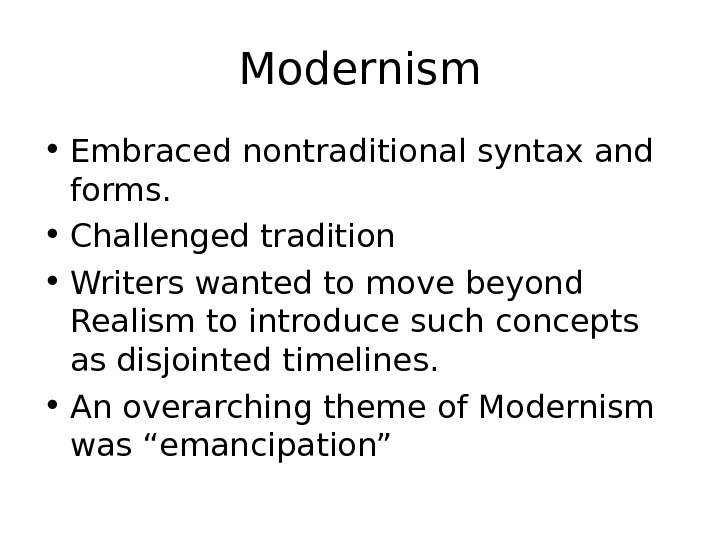 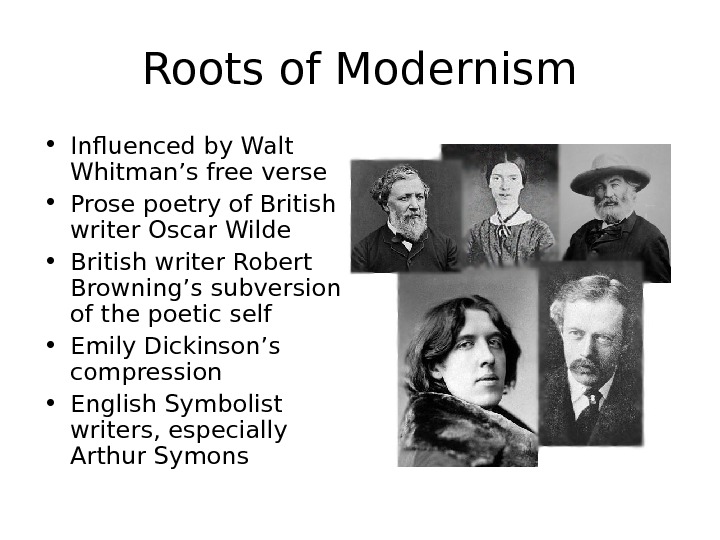 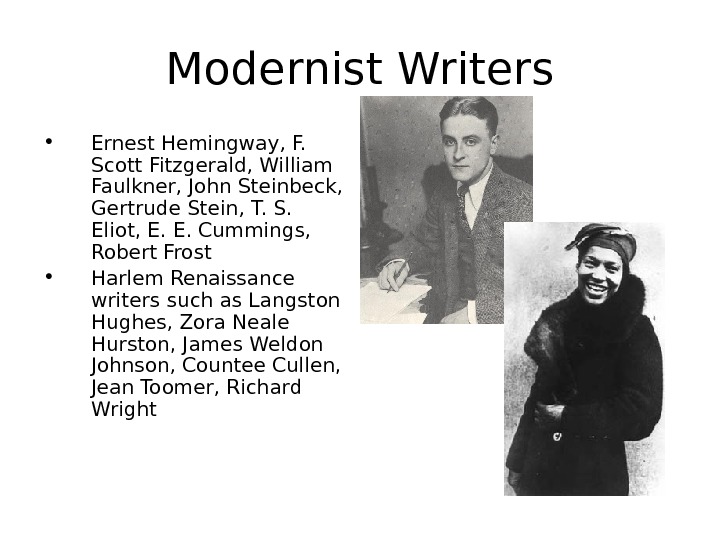 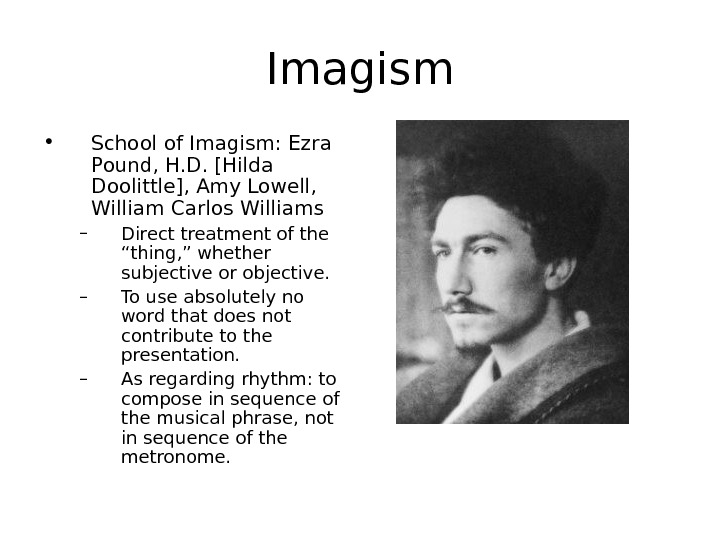 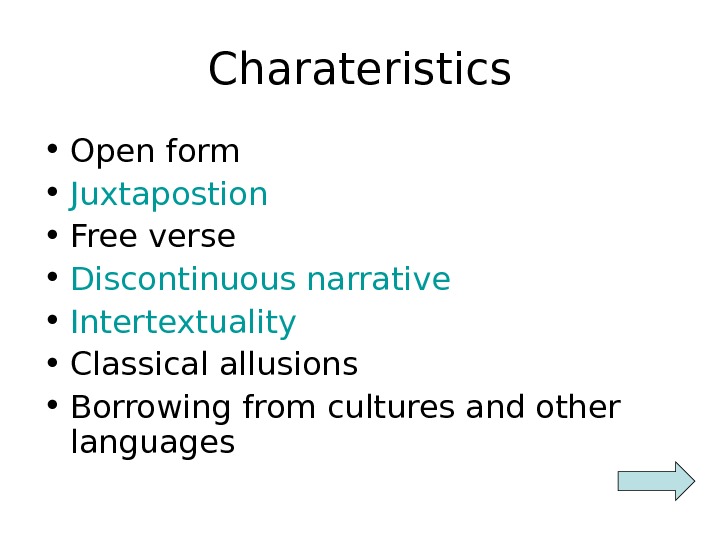 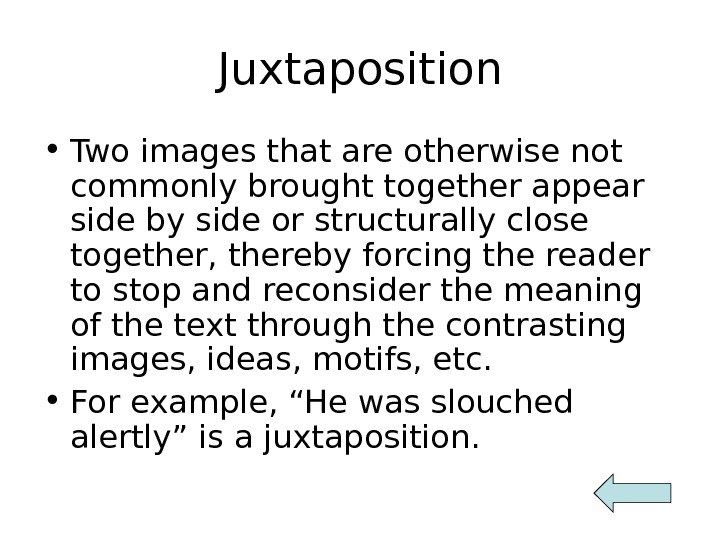 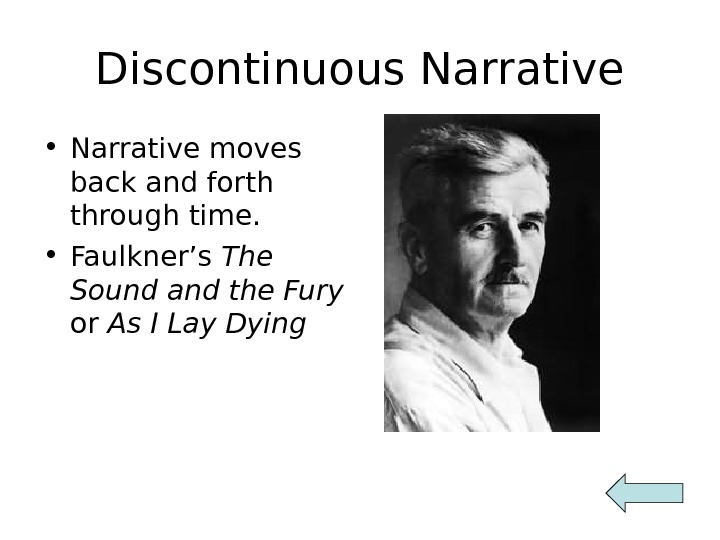 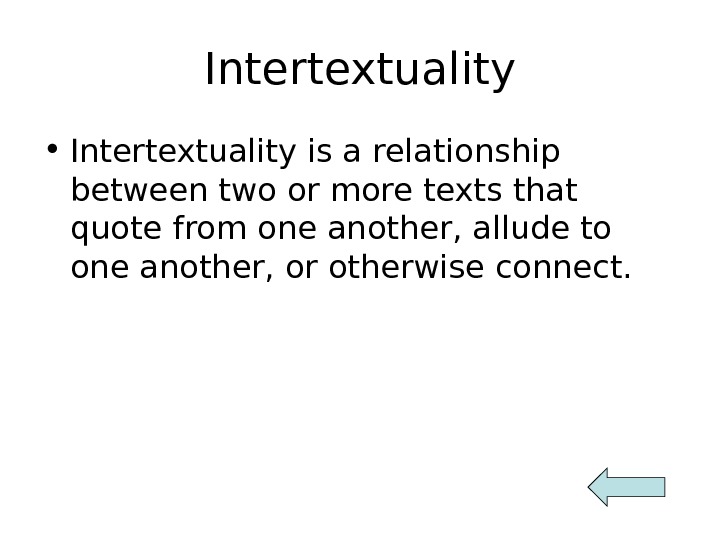 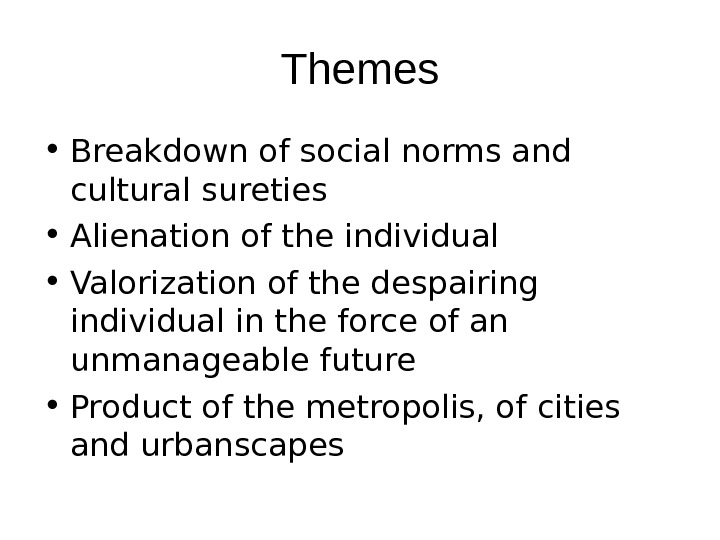 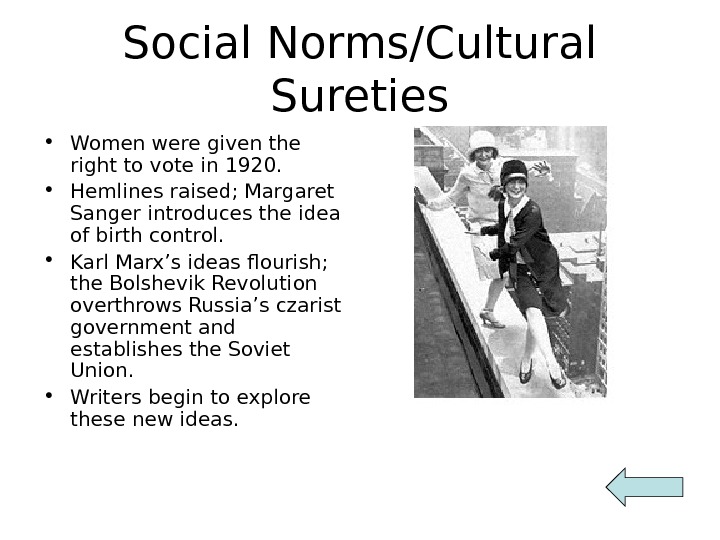 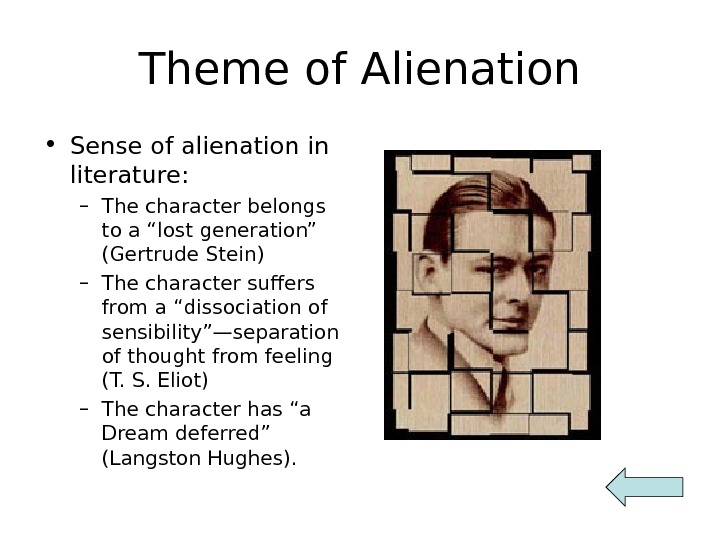 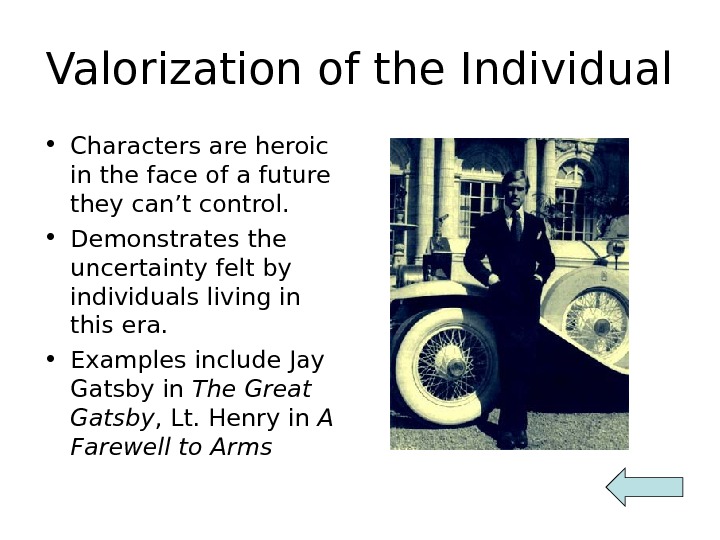 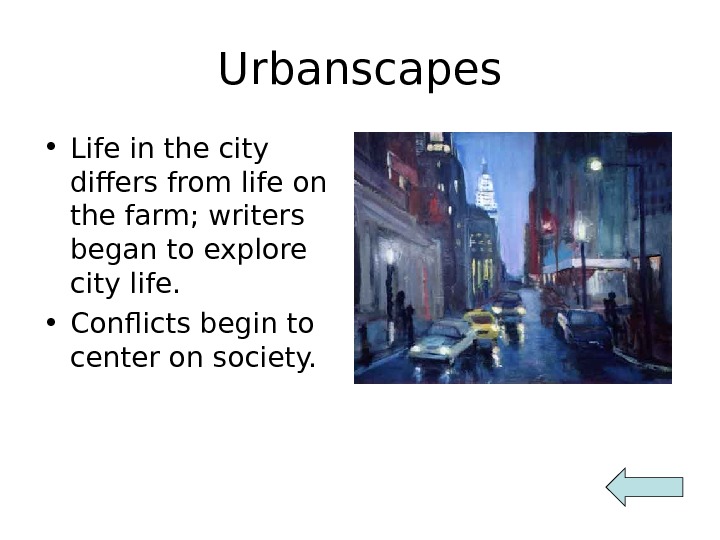 Between World Wars • Many historians have described the period between the two World Wars as a “traumatic coming of age. ” • In a post-Industrial Revolution era, America had moved from an agrarian nation to an urban nation. • The lives of these Americans were radically different from those of their parents.

Modernism • Embraced nontraditional syntax and forms. • Challenged tradition • Writers wanted to move beyond Realism to introduce such concepts as disjointed timelines. • An overarching theme of Modernism was “emancipation”

Imagism • School of Imagism: Ezra Pound, H. D. [Hilda Doolittle], Amy Lowell, William Carlos Williams – Direct treatment of the “thing, ” whether subjective or objective. – To use absolutely no word that does not contribute to the presentation. – As regarding rhythm: to compose in sequence of the musical phrase, not in sequence of the metronome.

Juxtaposition • Two images that are otherwise not commonly brought together appear side by side or structurally close together, thereby forcing the reader to stop and reconsider the meaning of the text through the contrasting images, ideas, motifs, etc. • For example, “He was slouched alertly” is a juxtaposition.

Discontinuous Narrative • Narrative moves back and forth through time. • Faulkner’s The Sound and the Fury or As I Lay Dying

Themes • Breakdown of social norms and cultural sureties • Alienation of the individual • Valorization of the despairing individual in the force of an unmanageable future • Product of the metropolis, of cities and urbanscapes

Valorization of the Individual • Characters are heroic in the face of a future they can’t control. • Demonstrates the uncertainty felt by individuals living in this era. • Examples include Jay Gatsby in The Great Gatsby , Lt. Henry in A Farewell to Arms

Urbanscapes • Life in the city differs from life on the farm; writers began to explore city life. • Conflicts begin to center on society.