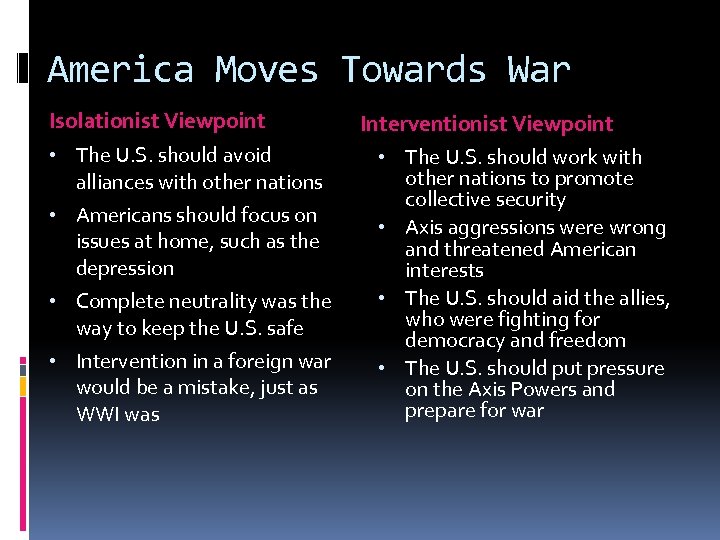 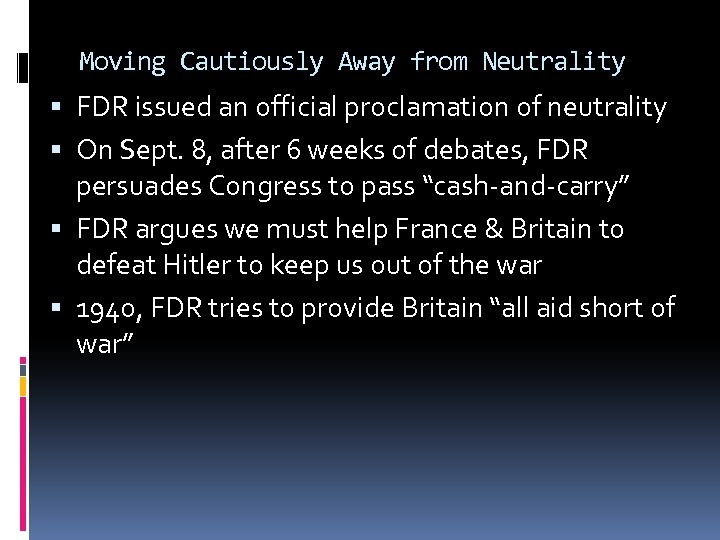 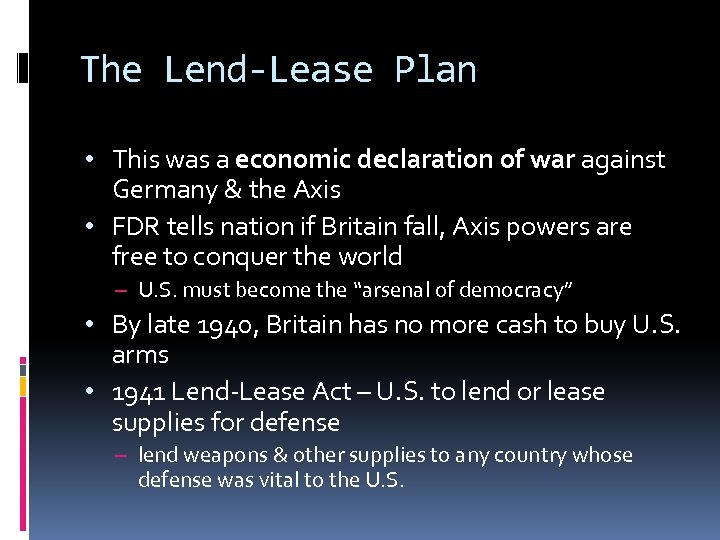 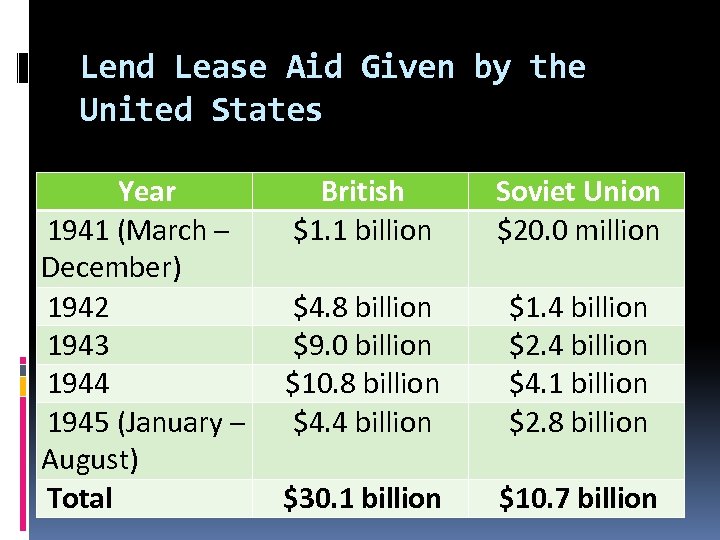 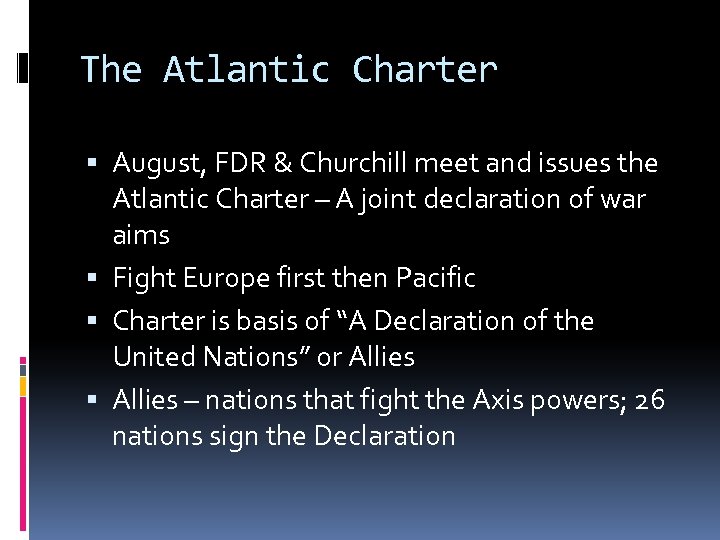 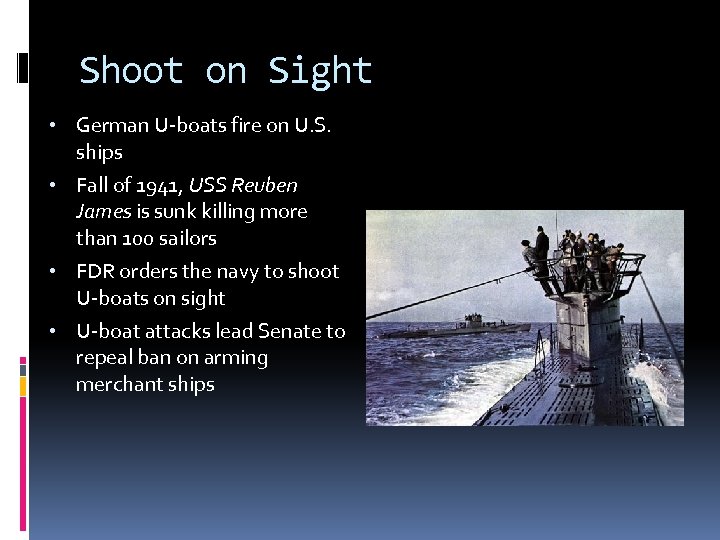 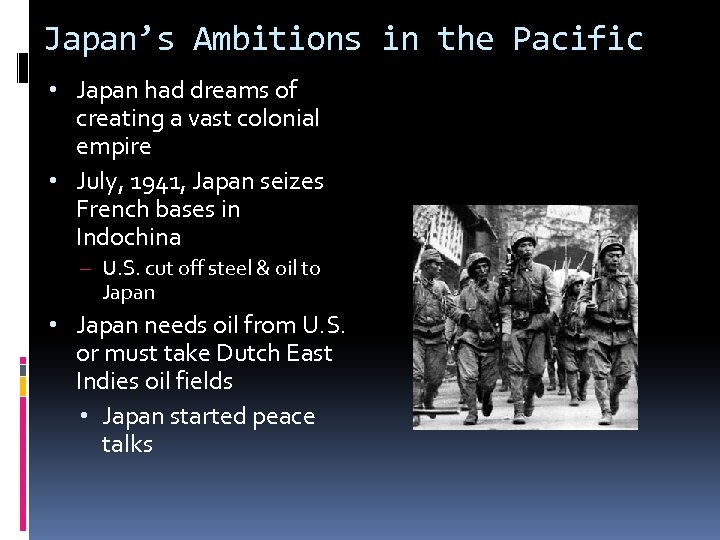 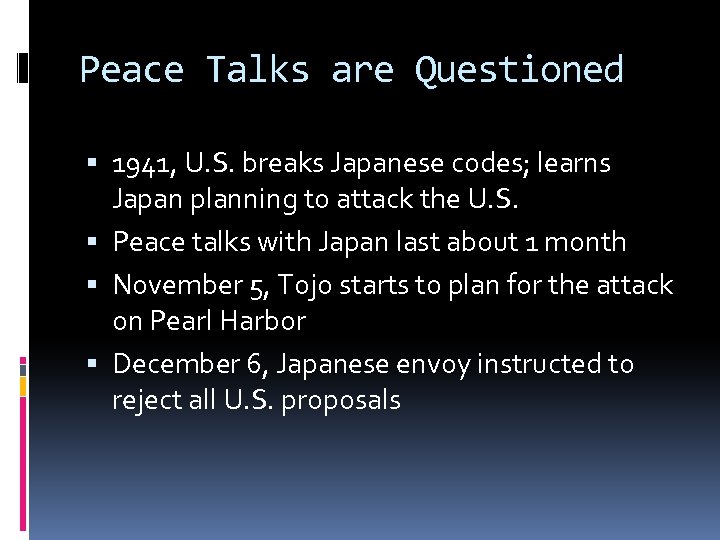 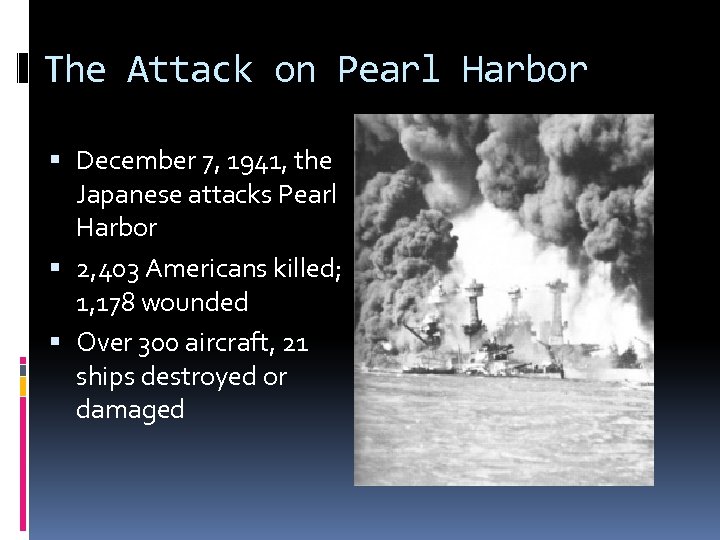 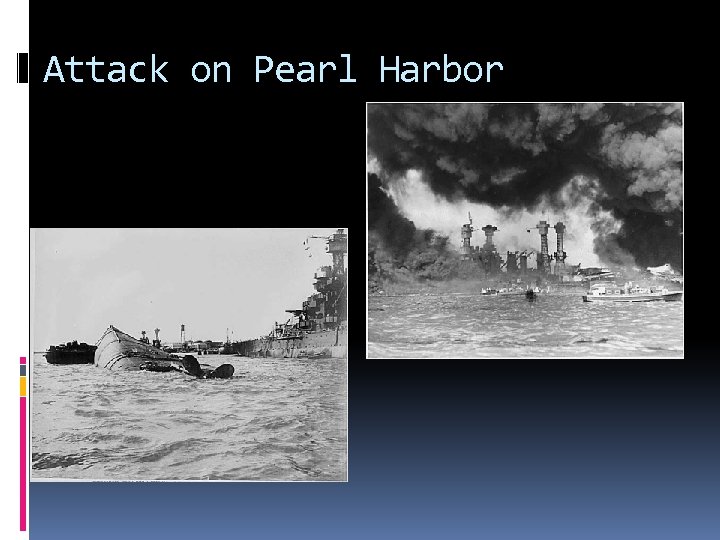 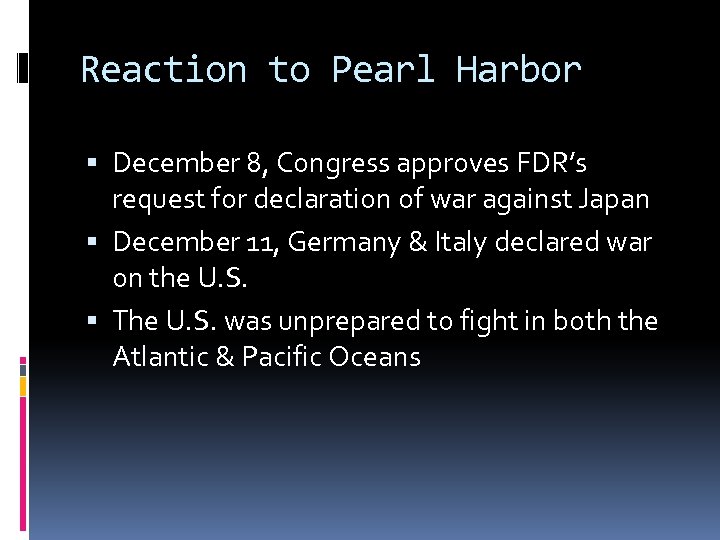 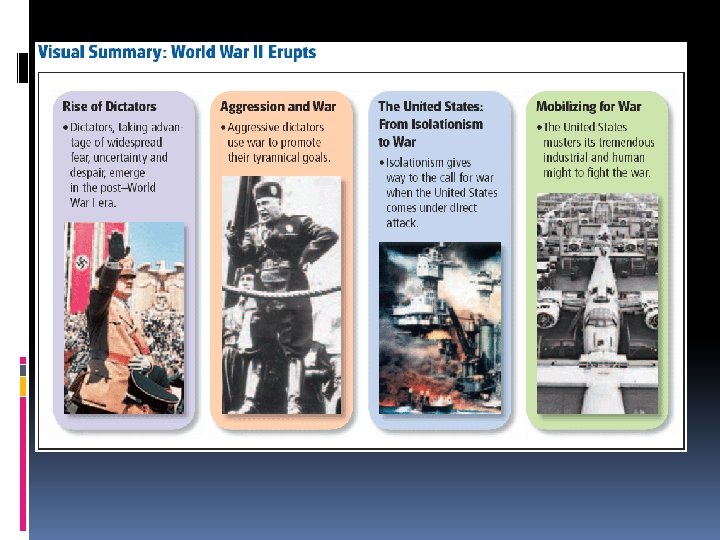 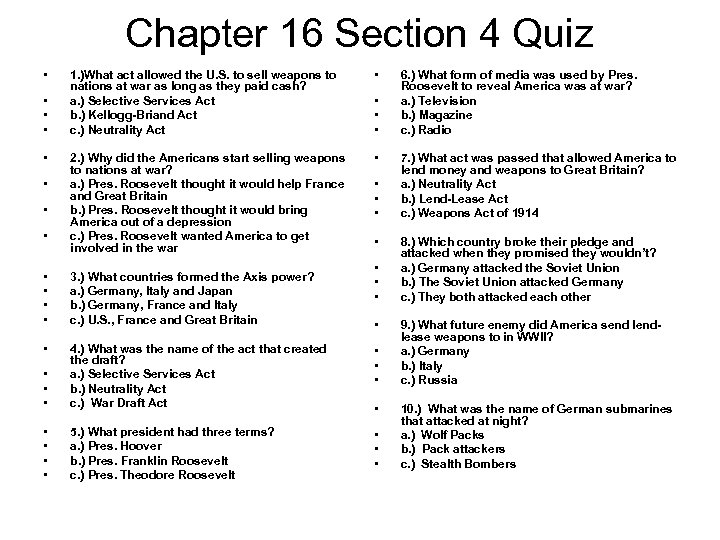 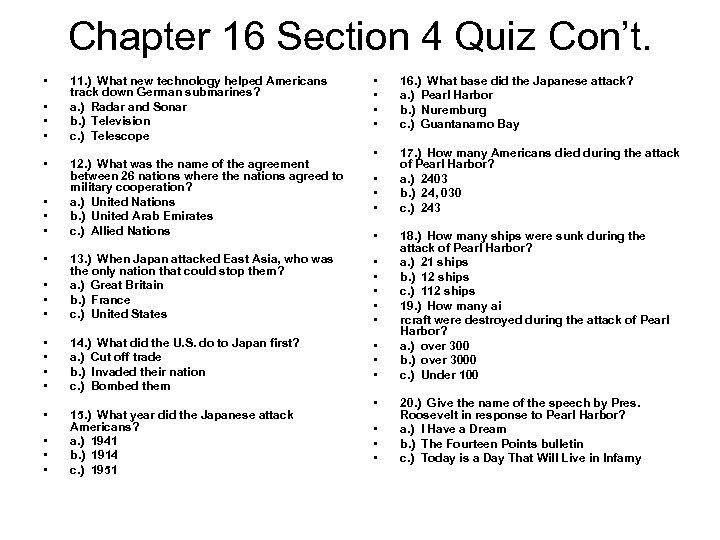 Moving Cautiously Away from Neutrality FDR issued an official proclamation of neutrality On Sept. 8, after 6 weeks of debates, FDR persuades Congress to pass “cash-and-carry” FDR argues we must help France & Britain to defeat Hitler to keep us out of the war 1940, FDR tries to provide Britain “all aid short of war”

The Lend-Lease Plan • This was a economic declaration of war against Germany & the Axis • FDR tells nation if Britain fall, Axis powers are free to conquer the world – U. S. must become the “arsenal of democracy” • By late 1940, Britain has no more cash to buy U. S. arms • 1941 Lend-Lease Act – U. S. to lend or lease supplies for defense – lend weapons & other supplies to any country whose defense was vital to the U. S.

Peace Talks are Questioned 1941, U. S. breaks Japanese codes; learns Japan planning to attack the U. S. Peace talks with Japan last about 1 month November 5, Tojo starts to plan for the attack on Pearl Harbor December 6, Japanese envoy instructed to reject all U. S. proposals

Reaction to Pearl Harbor December 8, Congress approves FDR’s request for declaration of war against Japan December 11, Germany & Italy declared war on the U. S. The U. S. was unprepared to fight in both the Atlantic & Pacific Oceans

Chapter 16 Section 4 Quiz • • 1. )What act allowed the U. S. to sell weapons to nations at war as long as they paid cash? a. ) Selective Services Act b. ) Kellogg-Briand Act c. ) Neutrality Act • 2. ) Why did the Americans start selling weapons to nations at war? a. ) Pres. Roosevelt thought it would help France and Great Britain b. ) Pres. Roosevelt thought it would bring America out of a depression c. ) Pres. Roosevelt wanted America to get involved in the war • • • • 3. ) What countries formed the Axis power? a. ) Germany, Italy and Japan b. ) Germany, France and Italy c. ) U. S. , France and Great Britain • • 4. ) What was the name of the act that created the draft? a. ) Selective Services Act b. ) Neutrality Act c. ) War Draft Act • • 5. ) What president had three terms? a. ) Pres. Hoover b. ) Pres. Franklin Roosevelt c. ) Pres. Theodore Roosevelt • • • 6. ) What form of media was used by Pres. Roosevelt to reveal America was at war? a. ) Television b. ) Magazine c. ) Radio 7. ) What act was passed that allowed America to lend money and weapons to Great Britain? a. ) Neutrality Act b. ) Lend-Lease Act c. ) Weapons Act of 1914 8. ) Which country broke their pledge and attacked when they promised they wouldn’t? a. ) Germany attacked the Soviet Union b. ) The Soviet Union attacked Germany c. ) They both attacked each other 9. ) What future enemy did America send lendlease weapons to in WWII? a. ) Germany b. ) Italy c. ) Russia 10. ) What was the name of German submarines that attacked at night? a. ) Wolf Packs b. ) Pack attackers c. ) Stealth Bombers