Alternative Fuels Ethanol What is ethanol 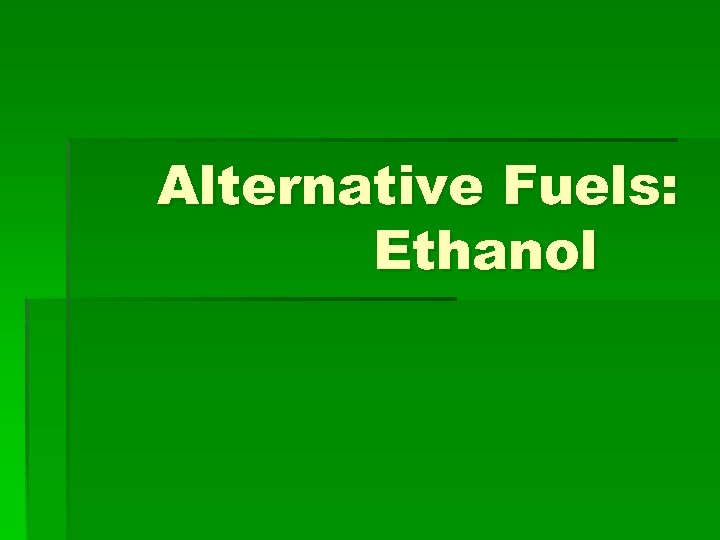 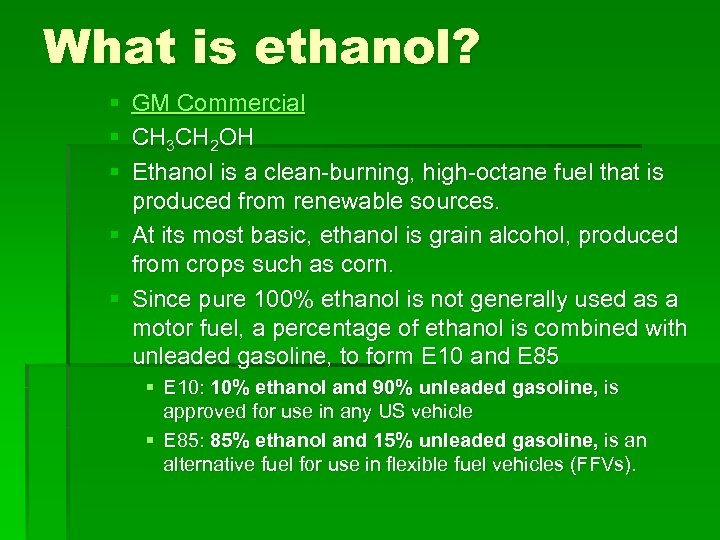 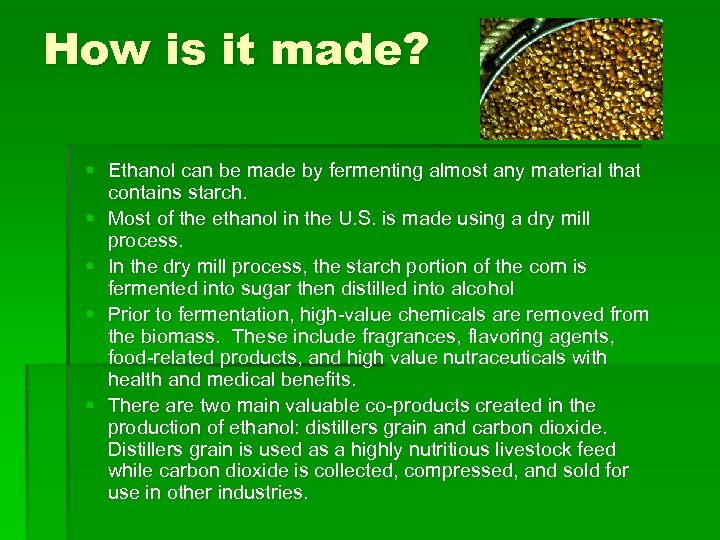 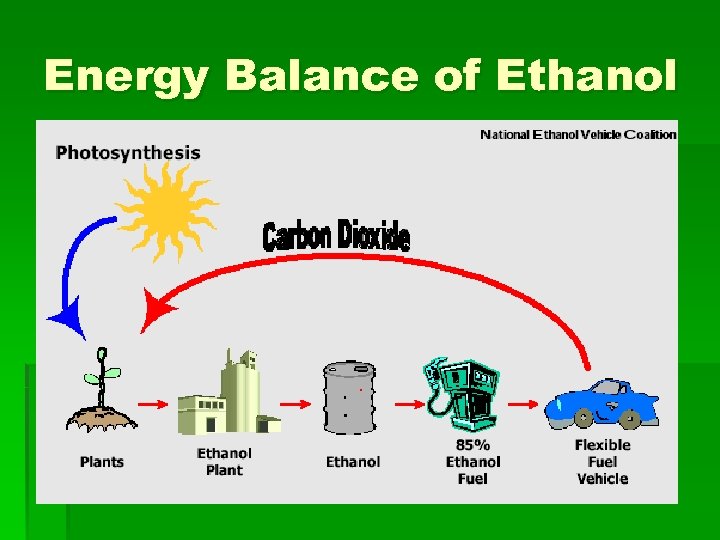 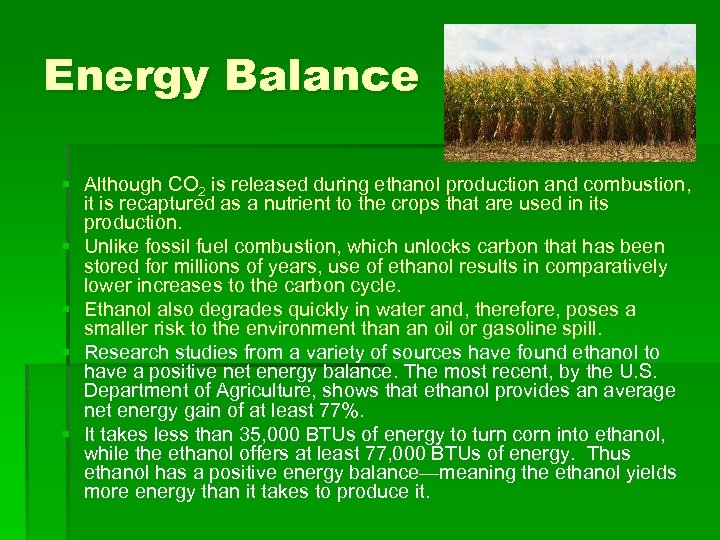 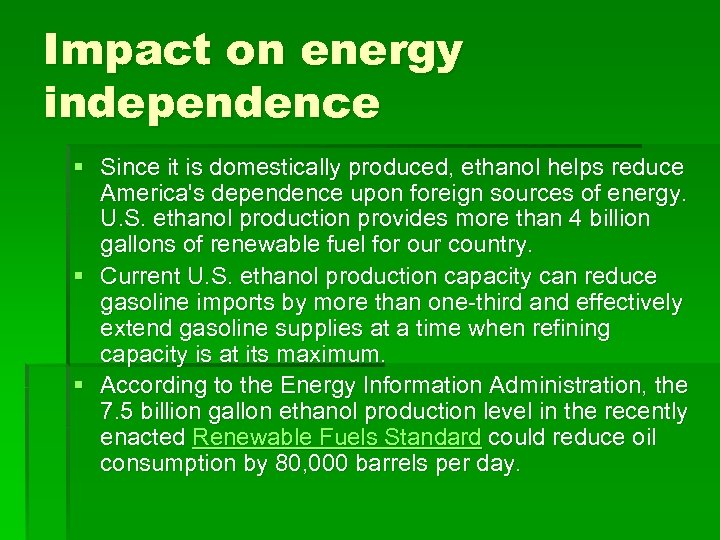 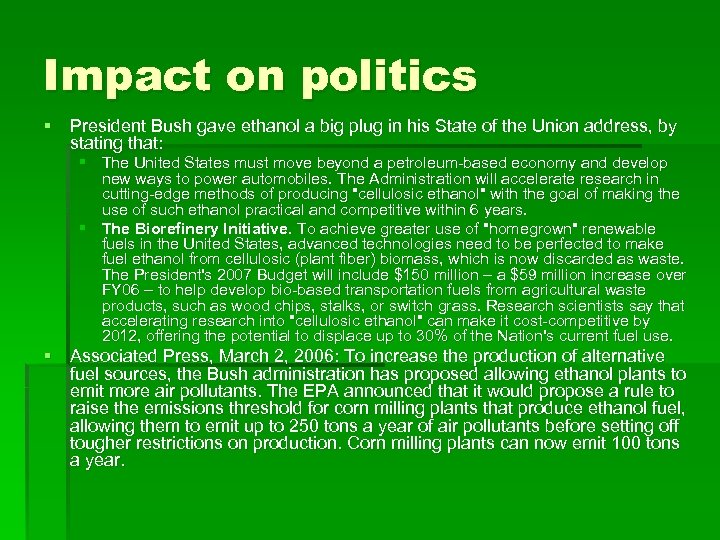 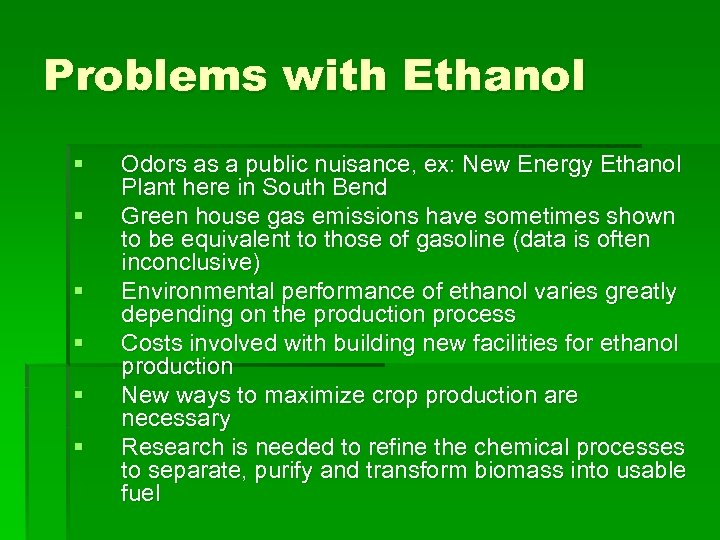 How is it made? § Ethanol can be made by fermenting almost any material that contains starch. § Most of the ethanol in the U. S. is made using a dry mill process. § In the dry mill process, the starch portion of the corn is fermented into sugar then distilled into alcohol § Prior to fermentation, high-value chemicals are removed from the biomass. These include fragrances, flavoring agents, food-related products, and high value nutraceuticals with health and medical benefits. § There are two main valuable co-products created in the production of ethanol: distillers grain and carbon dioxide. Distillers grain is used as a highly nutritious livestock feed while carbon dioxide is collected, compressed, and sold for use in other industries.

Energy Balance § Although CO 2 is released during ethanol production and combustion, it is recaptured as a nutrient to the crops that are used in its production. § Unlike fossil fuel combustion, which unlocks carbon that has been stored for millions of years, use of ethanol results in comparatively lower increases to the carbon cycle. § Ethanol also degrades quickly in water and, therefore, poses a smaller risk to the environment than an oil or gasoline spill. § Research studies from a variety of sources have found ethanol to have a positive net energy balance. The most recent, by the U. S. Department of Agriculture, shows that ethanol provides an average net energy gain of at least 77%. § It takes less than 35, 000 BTUs of energy to turn corn into ethanol, while the ethanol offers at least 77, 000 BTUs of energy. Thus ethanol has a positive energy balance—meaning the ethanol yields more energy than it takes to produce it.

Impact on air quality § Using ethanol-blended fuel has a positive impact on air quality. By adding oxygen to the combustion process which reduces exhaust emissions—resulting in a cleaner fuel for cleaner air. § Ethanol reduces the emissions of carbon monoxide, VOX, and toxic air emissions: § Since ethanol is an alcohol based product, it does not produce hydrocarbons when being burned or during evaporation thus decreasing the rate of ground level ozone formation. § Ethanol reduces pollution through the volumetric displacement of gasoline. The use of ethanol results in reductions in every pollutant regulated by the EPA, including ozone, air toxins, carbon monoxide, particulate matter, and NOX.

Impact on energy independence § Since it is domestically produced, ethanol helps reduce America's dependence upon foreign sources of energy. U. S. ethanol production provides more than 4 billion gallons of renewable fuel for our country. § Current U. S. ethanol production capacity can reduce gasoline imports by more than one-third and effectively extend gasoline supplies at a time when refining capacity is at its maximum. § According to the Energy Information Administration, the 7. 5 billion gallon ethanol production level in the recently enacted Renewable Fuels Standard could reduce oil consumption by 80, 000 barrels per day.

Impact on economy § In a 1997 study The Economic Impact of the Demand for Ethanol, Northwestern University’s Kellogg School of Management found that: § § § During ethanol plant construction, approximately 370 local jobs are created. During ethanol plant operation, up to 4, 000 local jobs are created. Ethanol plant construction creates $60 million to $130 million in additional income. § Ethanol plant operation creates $47 million to $100 million in additional income. § American-made, renewable ethanol directly displaces crude oil we would need to import, offering our country critically needed independence and security from foreign sources of energy. § The U. S. Department of Agriculture has concluded that a 100 million gallon ethanol facility could create 2, 250 local jobs for a single community. Ethanol production creates domestic markets for corn and adds 4 -6 cents a bushel for each 100 million bushels used. Better prices mean less reliance on government subsidy programs not to mention higher income and greater independence for farmers.

Impact on auto industry § Ethanol could be the alternative fuel source that catapults sales of American auto manufacturers. § GM and Ford are looking for environmental fixes that are quicker and cheaper than the more costly hybrids and futuristic fuel cells. Both companies started promoting flexible-fuel vehicles (FFVs) aggressively this year. § General Motors tied their new campaign "Live Green, Go Yellow. '' to not only Super Bowl Sunday but the opening of the Winter Olympics as well. § Since only about 600 of the nation's 170, 000 filling stations sell E 85, both companies have begun programs to install E 85 pumps at more stations.

Impact on politics § President Bush gave ethanol a big plug in his State of the Union address, by stating that: § The United States must move beyond a petroleum-based economy and develop new ways to power automobiles. The Administration will accelerate research in cutting-edge methods of producing "cellulosic ethanol" with the goal of making the use of such ethanol practical and competitive within 6 years. § The Biorefinery Initiative. To achieve greater use of "homegrown" renewable fuels in the United States, advanced technologies need to be perfected to make fuel ethanol from cellulosic (plant fiber) biomass, which is now discarded as waste. The President's 2007 Budget will include $150 million – a $59 million increase over FY 06 – to help develop bio-based transportation fuels from agricultural waste products, such as wood chips, stalks, or switch grass. Research scientists say that accelerating research into "cellulosic ethanol" can make it cost-competitive by 2012, offering the potential to displace up to 30% of the Nation's current fuel use. § Associated Press, March 2, 2006: To increase the production of alternative fuel sources, the Bush administration has proposed allowing ethanol plants to emit more air pollutants. The EPA announced that it would propose a rule to raise the emissions threshold for corn milling plants that produce ethanol fuel, allowing them to emit up to 250 tons a year of air pollutants before setting off tougher restrictions on production. Corn milling plants can now emit 100 tons a year.

Problems with Ethanol § § § Odors as a public nuisance, ex: New Energy Ethanol Plant here in South Bend Green house gas emissions have sometimes shown to be equivalent to those of gasoline (data is often inconclusive) Environmental performance of ethanol varies greatly depending on the production process Costs involved with building new facilities for ethanol production New ways to maximize crop production are necessary Research is needed to refine the chemical processes to separate, purify and transform biomass into usable fuel

Conclusion § Do the benefits outweigh the costs associated with ethanol production? § Ethanol helps communities to meet clean air standards, farmers to find new markets for their products, and America to replace foreign crude oil with a renewable source grown domestically.

Use Passive instead of Active 1. Roger Bacon

Types of questions I am a pupil