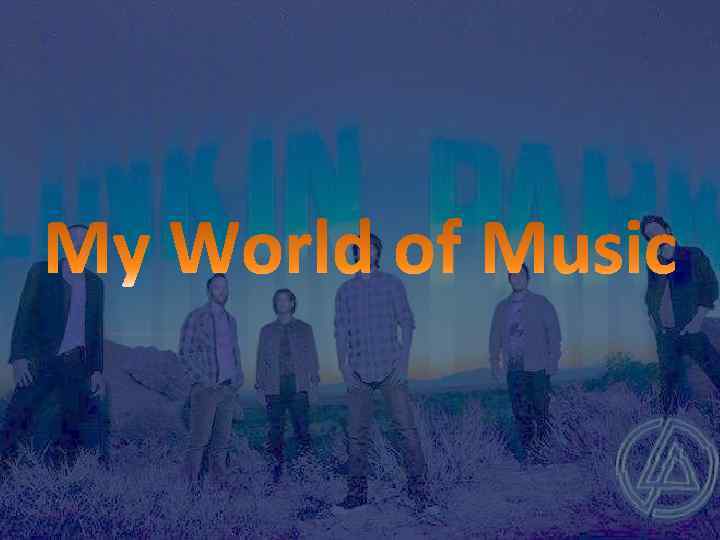 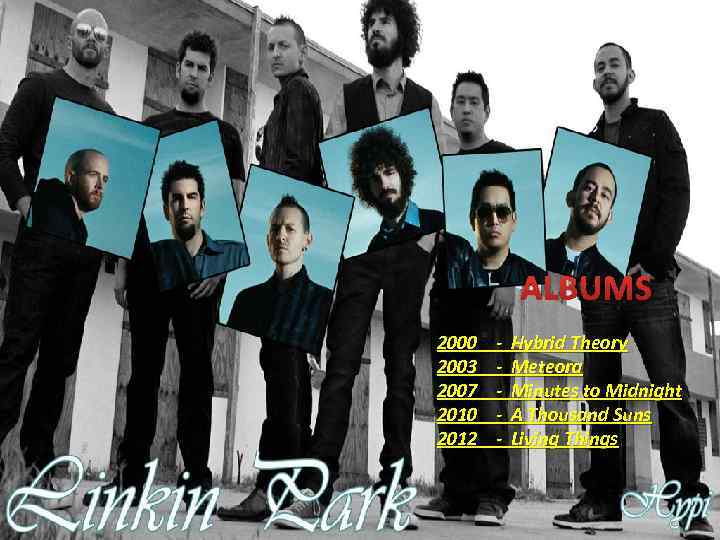 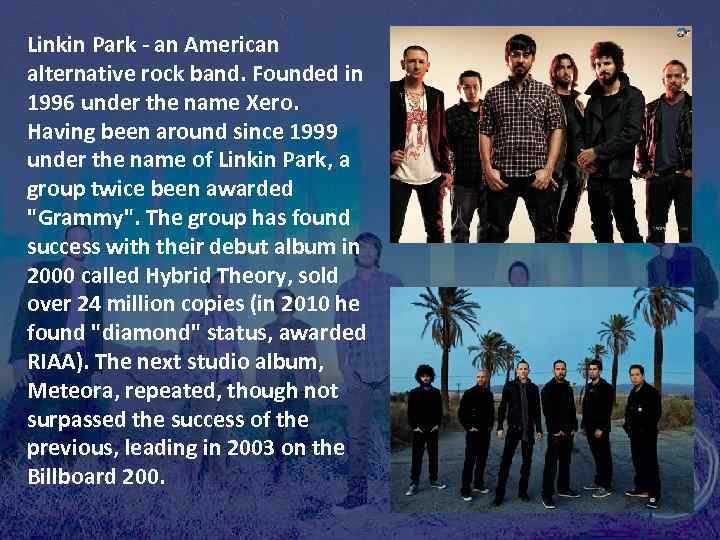 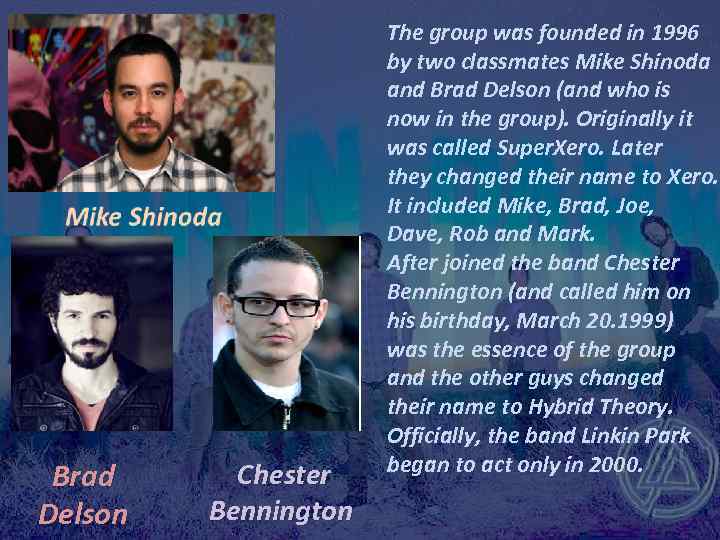 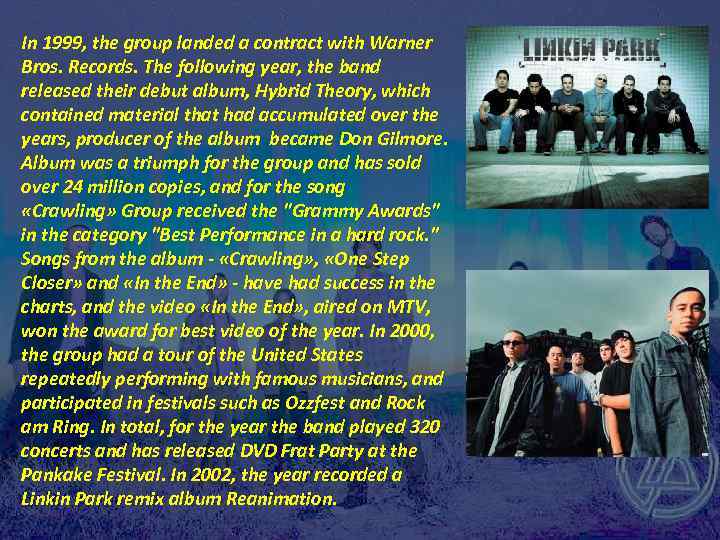 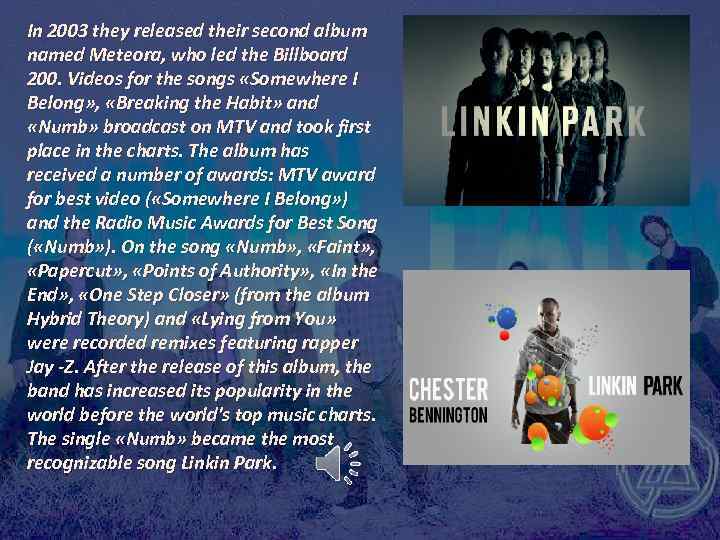 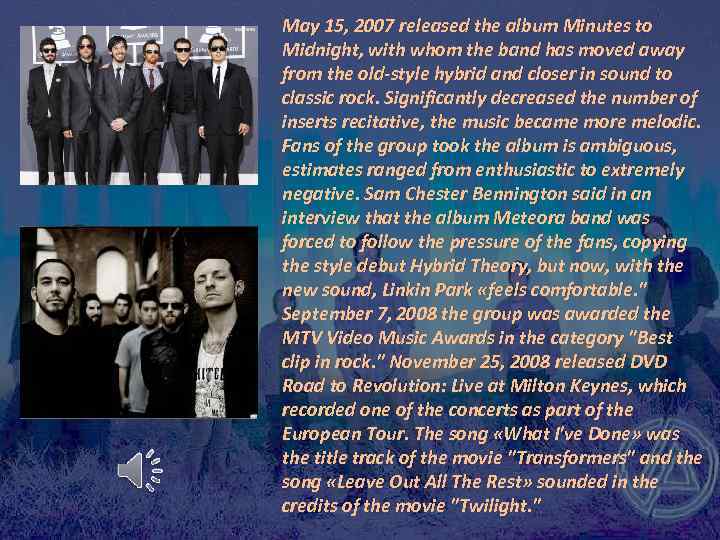 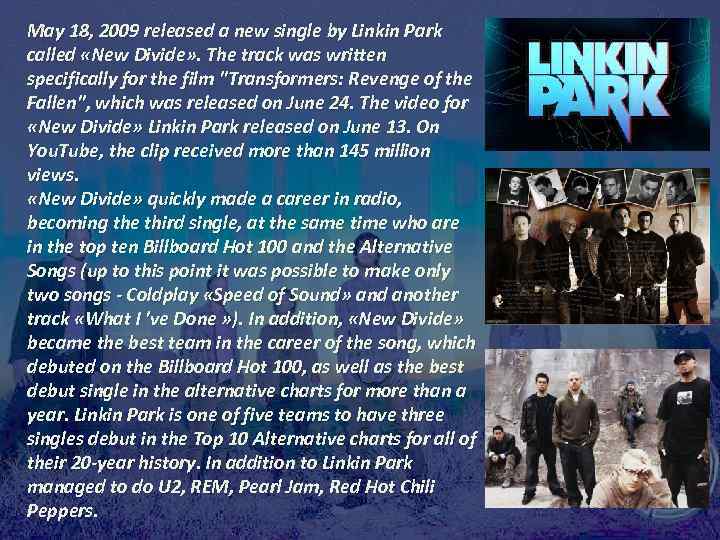 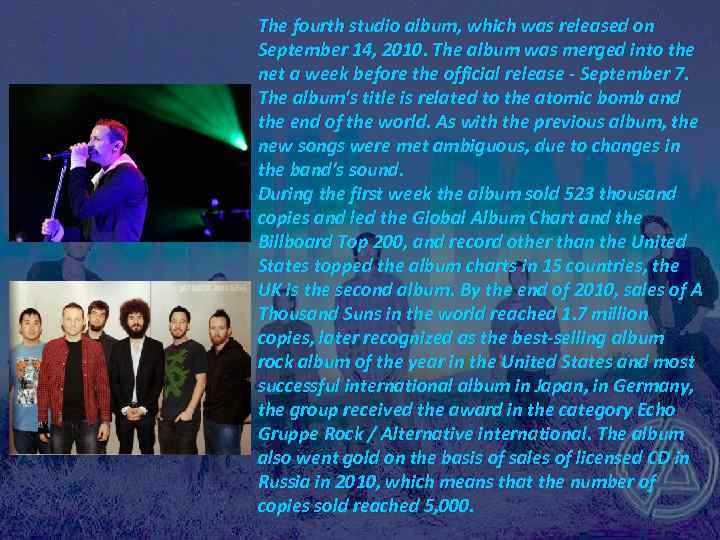 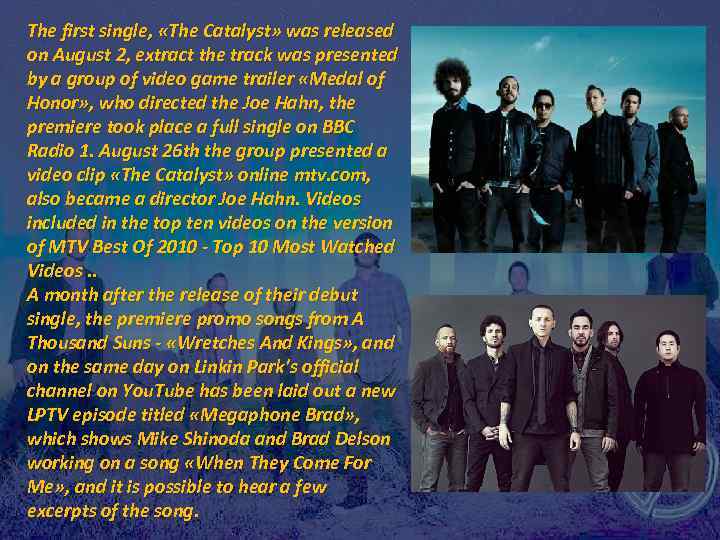 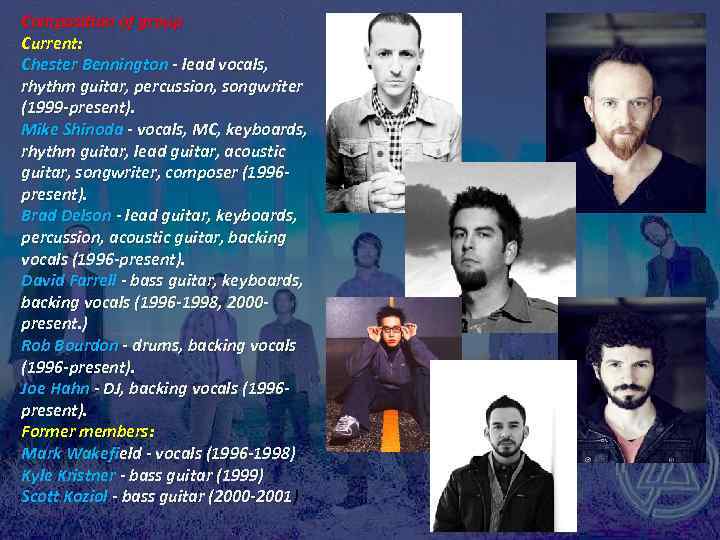 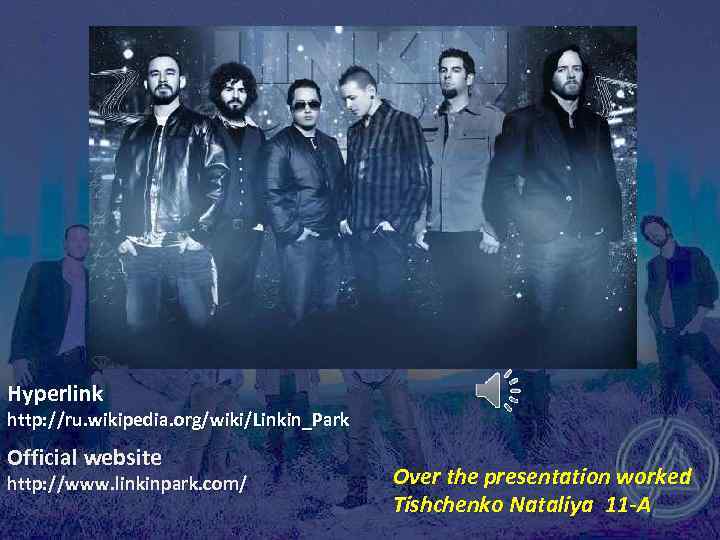 Linkin Park - an American alternative rock band. Founded in 1996 under the name Xero. Having been around since 1999 under the name of Linkin Park, a group twice been awarded "Grammy". The group has found success with their debut album in 2000 called Hybrid Theory, sold over 24 million copies (in 2010 he found "diamond" status, awarded RIAA). The next studio album, Meteora, repeated, though not surpassed the success of the previous, leading in 2003 on the Billboard 200.

Brad Delson Chester Bennington The group was founded in 1996 by two classmates Mike Shinoda and Brad Delson (and who is now in the group). Originally it was called Super. Xero. Later they changed their name to Xero. It included Mike, Brad, Joe, Dave, Rob and Mark. After joined the band Chester Bennington (and called him on his birthday, March 20. 1999) was the essence of the group and the other guys changed their name to Hybrid Theory. Officially, the band Linkin Park began to act only in 2000.

In 1999, the group landed a contract with Warner Bros. Records. The following year, the band released their debut album, Hybrid Theory, which contained material that had accumulated over the years, producer of the album became Don Gilmore. Album was a triumph for the group and has sold over 24 million copies, and for the song «Crawling» Group received the "Grammy Awards" in the category "Best Performance in a hard rock. " Songs from the album - «Crawling» , «One Step Closer» and «In the End» - have had success in the charts, and the video «In the End» , aired on MTV, won the award for best video of the year. In 2000, the group had a tour of the United States repeatedly performing with famous musicians, and participated in festivals such as Ozzfest and Rock am Ring. In total, for the year the band played 320 concerts and has released DVD Frat Party at the Pankake Festival. In 2002, the year recorded a Linkin Park remix album Reanimation.

In 2003 they released their second album named Meteora, who led the Billboard 200. Videos for the songs «Somewhere I Belong» , «Breaking the Habit» and «Numb» broadcast on MTV and took first place in the charts. The album has received a number of awards: MTV award for best video ( «Somewhere I Belong» ) and the Radio Music Awards for Best Song ( «Numb» ). On the song «Numb» , «Faint» , «Papercut» , «Points of Authority» , «In the End» , «One Step Closer» (from the album Hybrid Theory) and «Lying from You» were recorded remixes featuring rapper Jay -Z. After the release of this album, the band has increased its popularity in the world before the world's top music charts. The single «Numb» became the most recognizable song Linkin Park.

May 15, 2007 released the album Minutes to Midnight, with whom the band has moved away from the old-style hybrid and closer in sound to classic rock. Significantly decreased the number of inserts recitative, the music became more melodic. Fans of the group took the album is ambiguous, estimates ranged from enthusiastic to extremely negative. Sam Chester Bennington said in an interview that the album Meteora band was forced to follow the pressure of the fans, copying the style debut Hybrid Theory, but now, with the new sound, Linkin Park «feels comfortable. " September 7, 2008 the group was awarded the MTV Video Music Awards in the category "Best clip in rock. " November 25, 2008 released DVD Road to Revolution: Live at Milton Keynes, which recorded one of the concerts as part of the European Tour. The song «What I've Done» was the title track of the movie "Transformers" and the song «Leave Out All The Rest» sounded in the credits of the movie "Twilight. "

May 18, 2009 released a new single by Linkin Park called «New Divide» . The track was written specifically for the film "Transformers: Revenge of the Fallen", which was released on June 24. The video for «New Divide» Linkin Park released on June 13. On You. Tube, the clip received more than 145 million views. «New Divide» quickly made a career in radio, becoming the third single, at the same time who are in the top ten Billboard Hot 100 and the Alternative Songs (up to this point it was possible to make only two songs - Coldplay «Speed of Sound» and another track «What I 've Done » ). In addition, «New Divide» became the best team in the career of the song, which debuted on the Billboard Hot 100, as well as the best debut single in the alternative charts for more than a year. Linkin Park is one of five teams to have three singles debut in the Top 10 Alternative charts for all of their 20 -year history. In addition to Linkin Park managed to do U 2, REM, Pearl Jam, Red Hot Chili Peppers.

The fourth studio album, which was released on September 14, 2010. The album was merged into the net a week before the official release - September 7. The album's title is related to the atomic bomb and the end of the world. As with the previous album, the new songs were met ambiguous, due to changes in the band's sound. During the first week the album sold 523 thousand copies and led the Global Album Chart and the Billboard Top 200, and record other than the United States topped the album charts in 15 countries, the UK is the second album. By the end of 2010, sales of A Thousand Suns in the world reached 1. 7 million copies, later recognized as the best-selling album rock album of the year in the United States and most successful international album in Japan, in Germany, the group received the award in the category Echo Gruppe Rock / Alternative international. The album also went gold on the basis of sales of licensed CD in Russia in 2010, which means that the number of copies sold reached 5, 000.

The first single, «The Catalyst» was released on August 2, extract the track was presented by a group of video game trailer «Medal of Honor» , who directed the Joe Hahn, the premiere took place a full single on BBC Radio 1. August 26 th the group presented a video clip «The Catalyst» online mtv. com, also became a director Joe Hahn. Videos included in the top ten videos on the version of MTV Best Of 2010 - Top 10 Most Watched Videos. . A month after the release of their debut single, the premiere promo songs from A Thousand Suns - «Wretches And Kings» , and on the same day on Linkin Park's official channel on You. Tube has been laid out a new LPTV episode titled «Megaphone Brad» , which shows Mike Shinoda and Brad Delson working on a song «When They Come For Me» , and it is possible to hear a few excerpts of the song.

September 3 Warner Music Group DE in his official profile on the audio hosting Sound Cloud placed 28 -second clip of Linkin Park's next single titled «Waiting for the End» . September 7 full version of this song, the band introduced on My. Space, a full release occurred Oct. 1, 2010. The single allowed the band to head for the tenth time chart Alternative Songs, the track was also one of the most playable group's singles on the radio. The video clip was nominated for the MTV Video Music Awards in the category of "Best Special Effects. " February 22, the premiere of the video for the third single from the album «Burning in the Skies» , a full single was released March 21, 2011. May 27, 2011, the release of the latest single from A Thousand Suns - «Iridescent» , is the title track soundtrack for the movie "Transformers 3: Dark of the Moon", but is somewhat different from the album version.

In late January, Mike Shinoda, while at the festival "Sundance" as the composer of the film "The Raid", confirmed that the new album will be released in mid 2012. January 31 LPU Video Chat with Rob Bourdon. When asked fans whether aggressive album, the guys responded positively. March 24 All Access Music Group announced that Linkin Park's new single will be called «Burn It Down» , and he shall go out April 16, 2012. 28 March this information has been officially confirmed by Mike Shinoda. . For two weeks in different cities around the world took the game Scavengers Hunt, after which, May 24, at 22: 30 Moscow time, live in the London radio station BBC Radio Division 1 was presented to fans another song from the album, «Lies Greed Misery. "Also, «Lies Greed Misery» can be heard in one of the first trailer, showing gameplay «Medal of Honor: Warfighter» . The song «Powerless» became a soundtrack for the film "Abraham Lincoln: Vampire Hunter. " The single «Castle of Glass» became the soundtrack for the game «Medal of Honor: Warfighter» . October 19 was released single "Lost in the Echo".