Aggregate Supply and Demand Chapter 5 AS 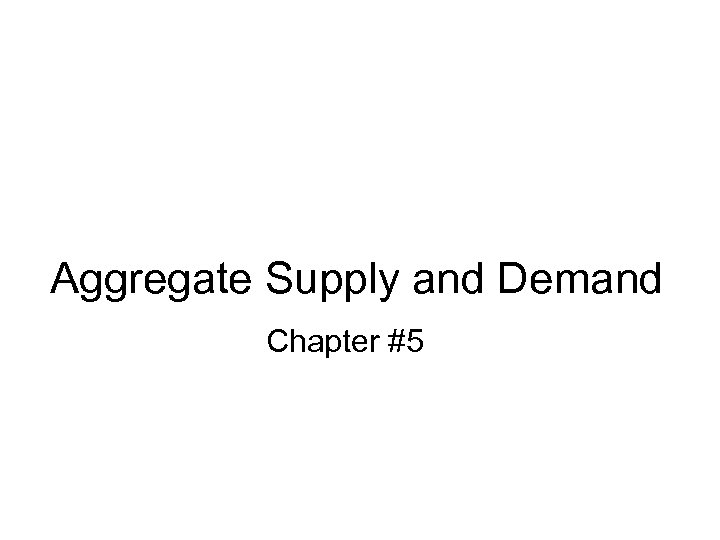 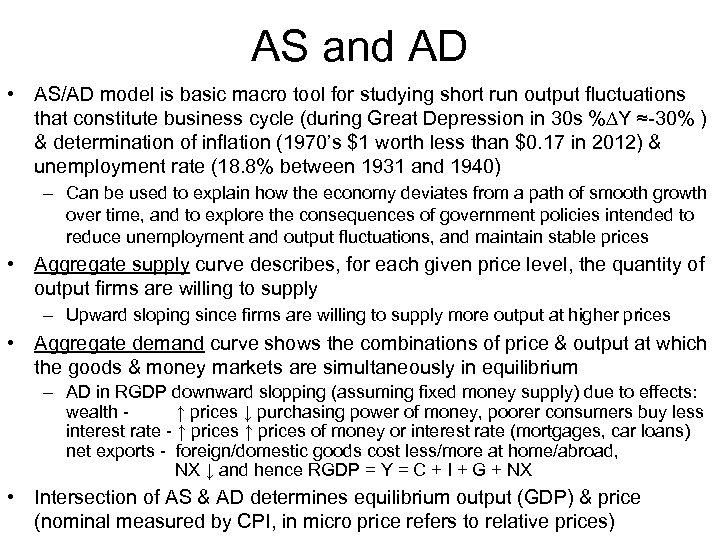 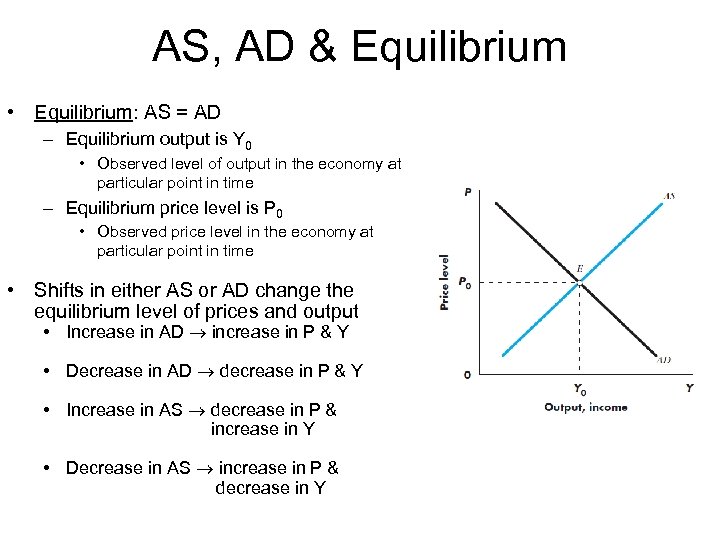 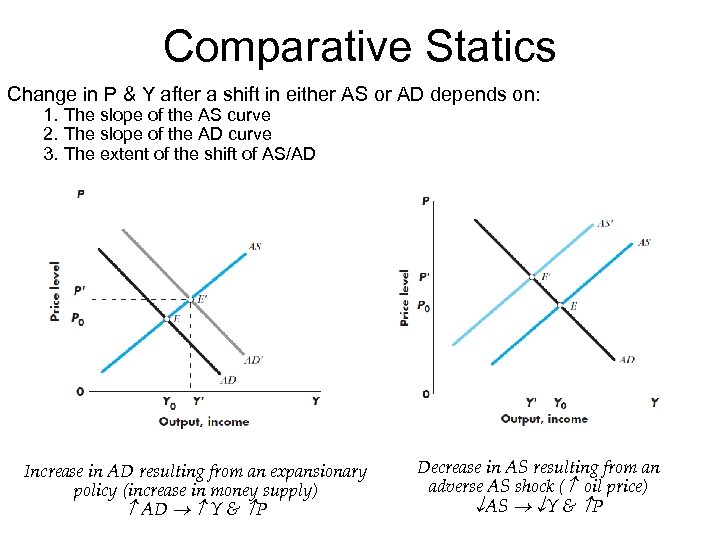 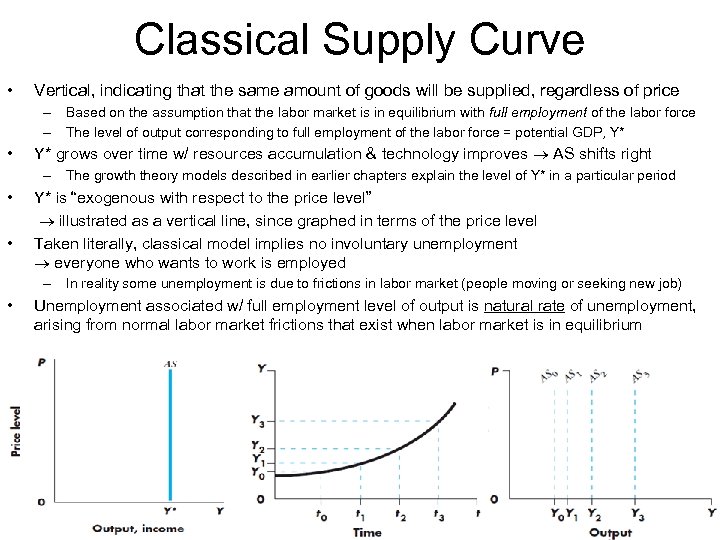 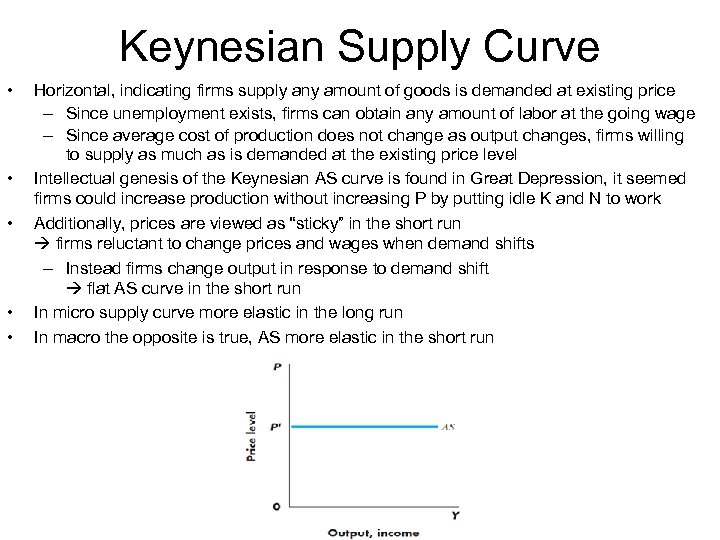 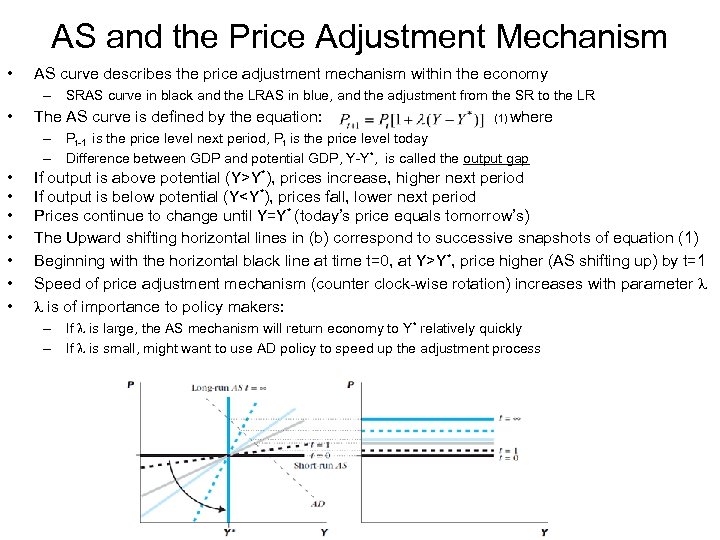 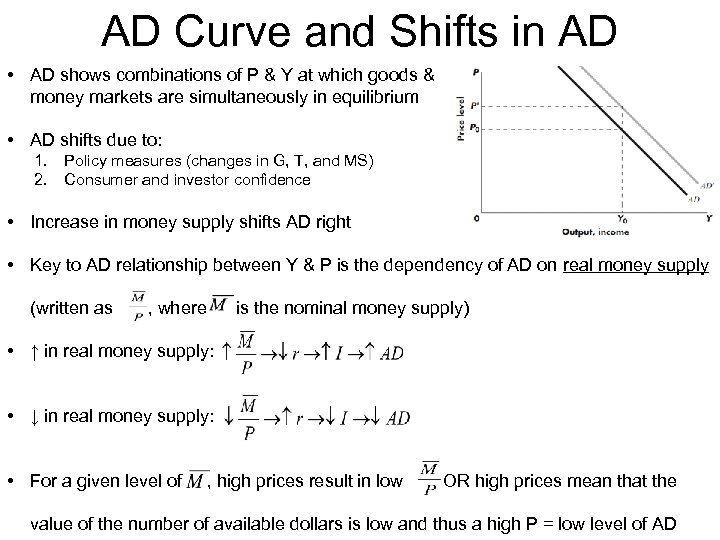 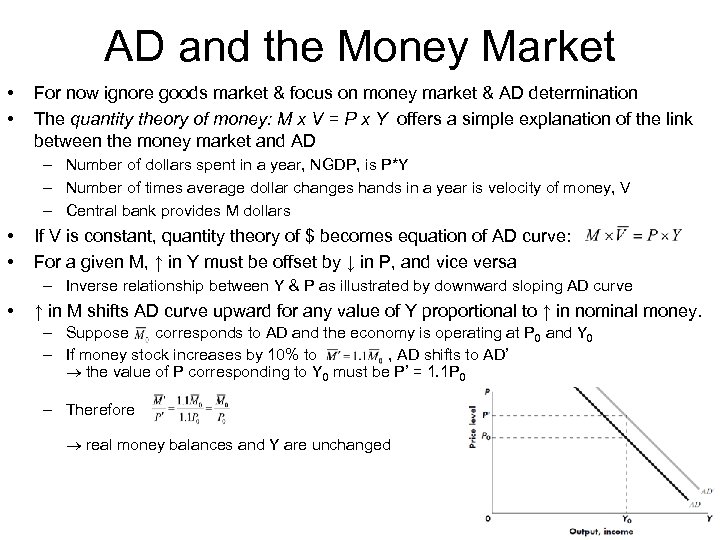 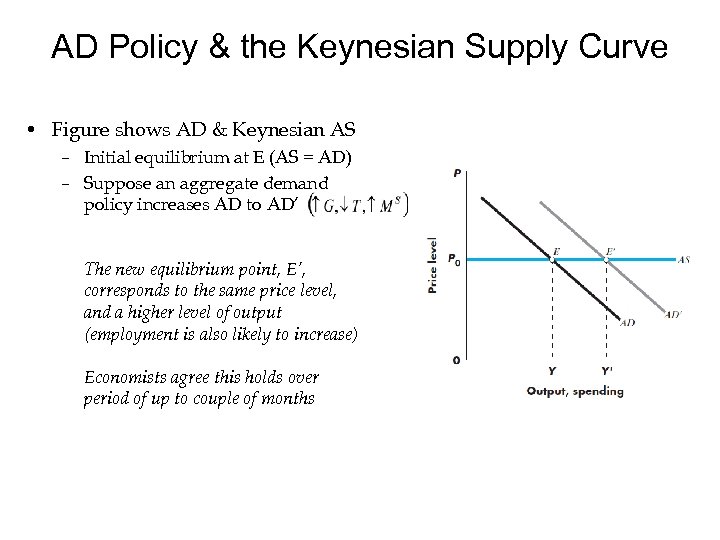 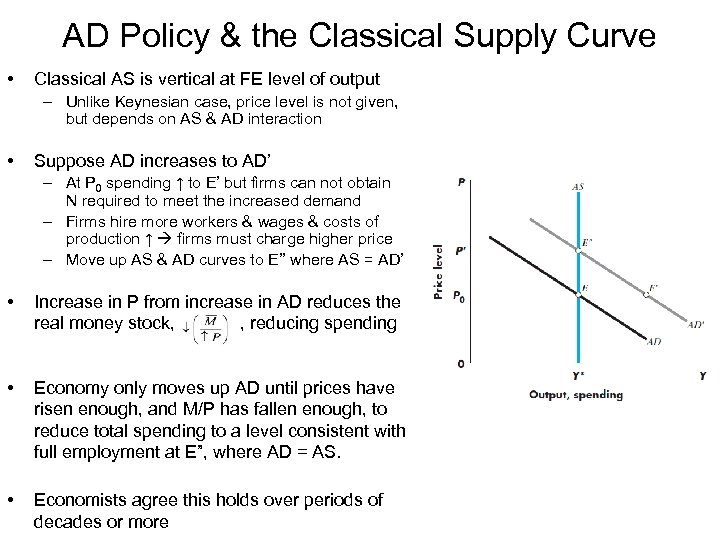 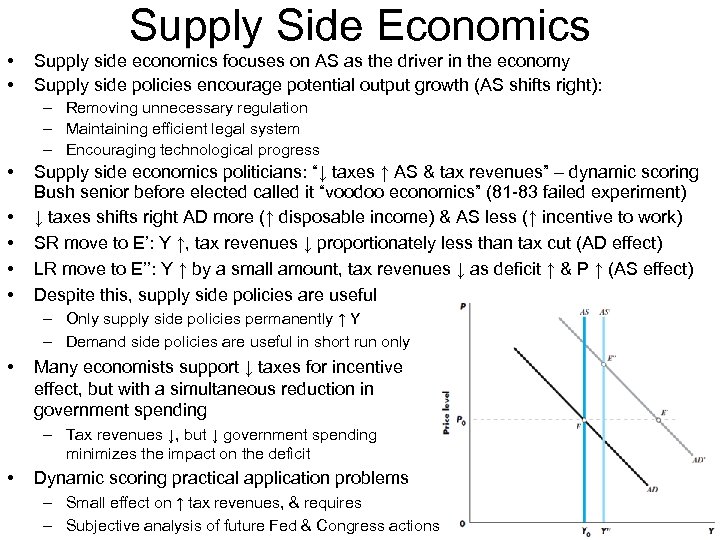 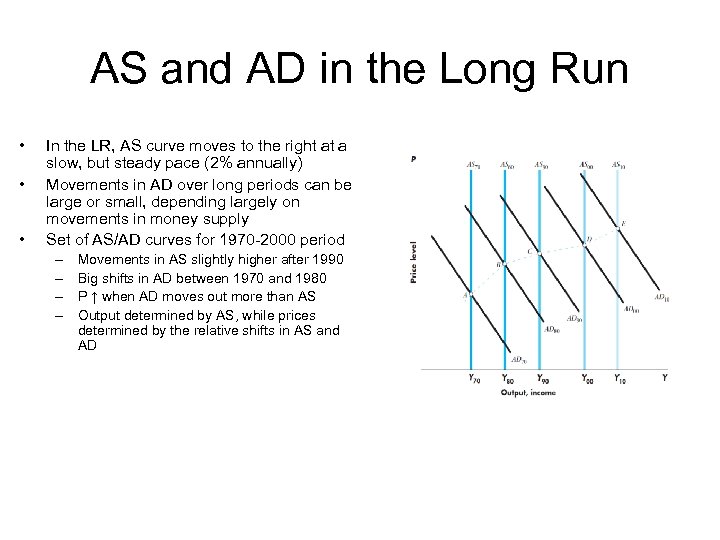 AS and AD • AS/AD model is basic macro tool for studying short run output fluctuations that constitute business cycle (during Great Depression in 30 s %∆Y ≈-30% ) & determination of inflation (1970’s $1 worth less than $0. 17 in 2012) & unemployment rate (18. 8% between 1931 and 1940) – Can be used to explain how the economy deviates from a path of smooth growth over time, and to explore the consequences of government policies intended to reduce unemployment and output fluctuations, and maintain stable prices • Aggregate supply curve describes, for each given price level, the quantity of output firms are willing to supply – Upward sloping since firms are willing to supply more output at higher prices • Aggregate demand curve shows the combinations of price & output at which the goods & money markets are simultaneously in equilibrium – AD in RGDP downward slopping (assuming fixed money supply) due to effects: wealth ↑ prices ↓ purchasing power of money, poorer consumers buy less interest rate - ↑ prices of money or interest rate (mortgages, car loans) net exports - foreign/domestic goods cost less/more at home/abroad, NX ↓ and hence RGDP = Y = C + I + G + NX • Intersection of AS & AD determines equilibrium output (GDP) & price (nominal measured by CPI, in micro price refers to relative prices)

Classical Supply Curve • Vertical, indicating that the same amount of goods will be supplied, regardless of price – Based on the assumption that the labor market is in equilibrium with full employment of the labor force – The level of output corresponding to full employment of the labor force = potential GDP, Y* • Y* grows over time w/ resources accumulation & technology improves AS shifts right – The growth theory models described in earlier chapters explain the level of Y* in a particular period • • Y* is “exogenous with respect to the price level” illustrated as a vertical line, since graphed in terms of the price level Taken literally, classical model implies no involuntary unemployment everyone who wants to work is employed – In reality some unemployment is due to frictions in labor market (people moving or seeking new job) • Unemployment associated w/ full employment level of output is natural rate of unemployment, arising from normal labor market frictions that exist when labor market is in equilibrium

Keynesian Supply Curve • • • Horizontal, indicating firms supply any amount of goods is demanded at existing price – Since unemployment exists, firms can obtain any amount of labor at the going wage – Since average cost of production does not change as output changes, firms willing to supply as much as is demanded at the existing price level Intellectual genesis of the Keynesian AS curve is found in Great Depression, it seemed firms could increase production without increasing P by putting idle K and N to work Additionally, prices are viewed as “sticky” in the short run firms reluctant to change prices and wages when demand shifts – Instead firms change output in response to demand shift flat AS curve in the short run In micro supply curve more elastic in the long run In macro the opposite is true, AS more elastic in the short run

AS and the Price Adjustment Mechanism • AS curve describes the price adjustment mechanism within the economy – SRAS curve in black and the LRAS in blue, and the adjustment from the SR to the LR • The AS curve is defined by the equation: (1) where – Pt-1 is the price level next period, Pt is the price level today – Difference between GDP and potential GDP, Y-Y*, is called the output gap • • If output is above potential (Y>Y*), prices increase, higher next period If output is below potential (Y

AD and the Money Market • • For now ignore goods market & focus on money market & AD determination The quantity theory of money: M x V = P x Y offers a simple explanation of the link between the money market and AD – Number of dollars spent in a year, NGDP, is P*Y – Number of times average dollar changes hands in a year is velocity of money, V – Central bank provides M dollars • • If V is constant, quantity theory of $ becomes equation of AD curve: For a given M, ↑ in Y must be offset by ↓ in P, and vice versa – Inverse relationship between Y & P as illustrated by downward sloping AD curve • ↑ in M shifts AD curve upward for any value of Y proportional to ↑ in nominal money. – Suppose corresponds to AD and the economy is operating at P 0 and Y 0 – If money stock increases by 10% to , AD shifts to AD’ the value of P corresponding to Y 0 must be P’ = 1. 1 P 0 – Therefore real money balances and Y are unchanged

AD Policy & the Keynesian Supply Curve • Figure shows AD & Keynesian AS – Initial equilibrium at E (AS = AD) – Suppose an aggregate demand policy increases AD to AD’ The new equilibrium point, E’, corresponds to the same price level, and a higher level of output (employment is also likely to increase) Economists agree this holds over period of up to couple of months

AD Policy & the Classical Supply Curve • Classical AS is vertical at FE level of output – Unlike Keynesian case, price level is not given, but depends on AS & AD interaction • Suppose AD increases to AD’ – At P 0 spending ↑ to E’ but firms can not obtain N required to meet the increased demand – Firms hire more workers & wages & costs of production ↑ firms must charge higher price – Move up AS & AD curves to E’’ where AS = AD’ • Increase in P from increase in AD reduces the real money stock, , reducing spending • Economy only moves up AD until prices have risen enough, and M/P has fallen enough, to reduce total spending to a level consistent with full employment at E”, where AD = AS. • Economists agree this holds over periods of decades or more

AS and AD in the Long Run • • • In the LR, AS curve moves to the right at a slow, but steady pace (2% annually) Movements in AD over long periods can be large or small, depending largely on movements in money supply Set of AS/AD curves for 1970 -2000 period – – Movements in AS slightly higher after 1990 Big shifts in AD between 1970 and 1980 P ↑ when AD moves out more than AS Output determined by AS, while prices determined by the relative shifts in AS and AD