Age and Sex Estimates of Subadult Ilia from 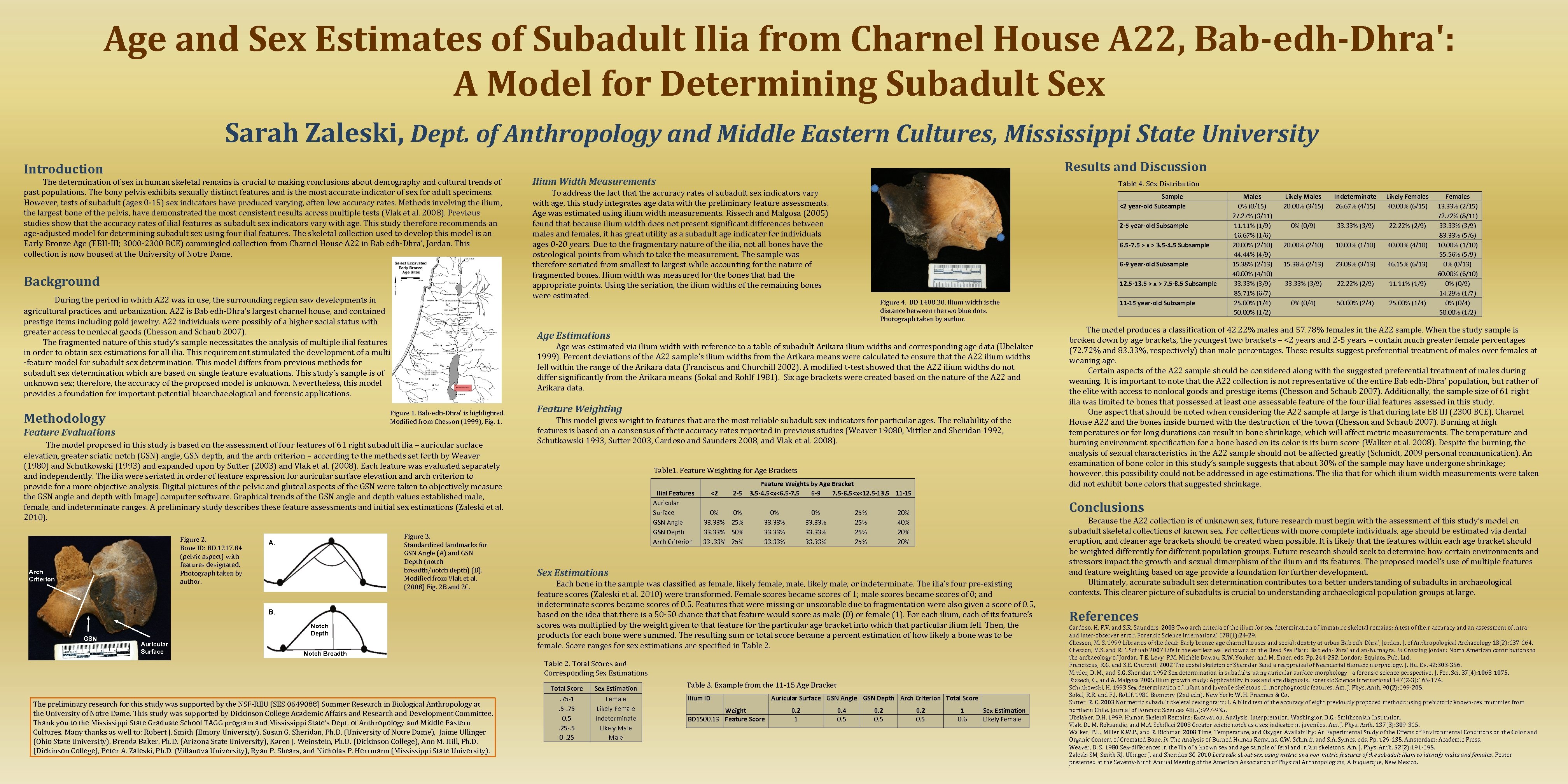 Скачать презентацию Age and Sex Estimates of Subadult Ilia from

Age and Sex Estimates of Subadult Ilia from Charnel House A 22, Bab-edh-Dhra': A Model for Determining Subadult Sex Sarah Zaleski, Dept. of Anthropology and Middle Eastern Cultures, Mississippi State University Results and Discussion Introduction The determination of sex in human skeletal remains is crucial to making conclusions about demography and cultural trends of past populations. The bony pelvis exhibits sexually distinct features and is the most accurate indicator of sex for adult specimens. However, tests of subadult (ages 0 -15) sex indicators have produced varying, often low accuracy rates. Methods involving the ilium, the largest bone of the pelvis, have demonstrated the most consistent results across multiple tests (Vlak et al. 2008). Previous studies show that the accuracy rates of ilial features as subadult sex indicators vary with age. This study therefore recommends an age-adjusted model for determining subadult sex using four ilial features. The skeletal collection used to develop this model is an Early Bronze Age (EBII-III; 3000 -2300 BCE) commingled collection from Charnel House A 22 in Bab edh-Dhra’, Jordan. This collection is now housed at the University of Notre Dame. Background During the period in which A 22 was in use, the surrounding region saw developments in agricultural practices and urbanization. A 22 is Bab edh-Dhra’s largest charnel house, and contained prestige items including gold jewelry. A 22 individuals were possibly of a higher social status with greater access to nonlocal goods (Chesson and Schaub 2007). The fragmented nature of this study’s sample necessitates the analysis of multiple ilial features in order to obtain sex estimations for all ilia. This requirement stimulated the development of a multi -feature model for subadult sex determination. This model differs from previous methods for subadult sex determination which are based on single feature evaluations. This study’s sample is of unknown sex; therefore, the accuracy of the proposed model is unknown. Nevertheless, this model provides a foundation for important potential bioarchaeological and forensic applications. To address the fact that the accuracy rates of subadult sex indicators vary with age, this study integrates age data with the preliminary feature assessments. Age was estimated using ilium width measurements. Rissech and Malgosa (2005) found that because ilium width does not present significant differences between males and females, it has great utility as a subadult age indicator for individuals ages 0 -20 years. Due to the fragmentary nature of the ilia, not all bones have the osteological points from which to take the measurement. The sample was therefore seriated from smallest to largest while accounting for the nature of fragmented bones. Ilium width was measured for the bones that had the appropriate points. Using the seriation, the ilium widths of the remaining bones were estimated. Feature Weighting This model gives weight to features that are the most reliable subadult sex indicators for particular ages. The reliability of the features is based on a consensus of their accuracy rates reported in previous studies (Weaver 19080, Mittler and Sheridan 1992, Schutkowski 1993, Sutter 2003, Cardoso and Saunders 2008, and Vlak et al. 2008). elevation, greater sciatic notch (GSN) angle, GSN depth, and the arch criterion – according to the methods set forth by Weaver (1980) and Schutkowski (1993) and expanded upon by Sutter (2003) and Vlak et al. (2008). Each feature was evaluated separately and independently. The ilia were seriated in order of feature expression for auricular surface elevation and arch criterion to provide for a more objective analysis. Digital pictures of the pelvic and gluteal aspects of the GSN were taken to objectively measure the GSN angle and depth with Image. J computer software. Graphical trends of the GSN angle and depth values established male, female, and indeterminate ranges. A preliminary study describes these feature assessments and initial sex estimations (Zaleski et al. 2010). Arch Criterion Figure 3. Standardized landmarks for GSN Angle (A) and GSN Depth (notch breadth/notch depth) (B). Modified from Vlak et al. (2008) Fig. 2 B and 2 C. A. B. GSN Notch Depth Auricular Surface Figure 4. BD 1408. 30. Ilium width is the distance between the two blue dots. Photograph taken by author. Age was estimated via ilium width with reference to a table of subadult Arikara ilium widths and corresponding age data (Ubelaker 1999). Percent deviations of the A 22 sample’s ilium widths from the Arikara means were calculated to ensure that the A 22 ilium widths fell within the range of the Arikara data (Franciscus and Churchill 2002). A modified t-test showed that the A 22 ilium widths do not differ significantly from the Arikara means (Sokal and Rohlf 1981). Six age brackets were created based on the nature of the A 22 and Arikara data. Feature Evaluations The model proposed in this study is based on the assessment of four features of 61 right subadult ilia – auricular surface Figure 2. Bone ID: BD. 1217. 84 (pelvic aspect) with features designated. Photograph taken by author. Table 4. Sex Distribution Age Estimations Figure 1. Bab-edh-Dhra’ is highlighted. Modified from Chesson (1999), Fig. 1. Methodology Ilium Width Measurements Notch Breadth Table 1. Feature Weighting for Age Brackets Ilial Features Auricular Surface GSN Angle GSN Depth Arch Criterion <2 2 -5 0% 0% 33. 33% 25% 33. 33% 50% 33. 33% 25% Feature Weights by Age Bracket 3. 5 -4. 5