African Peoples of the Americas Pg 12 -21 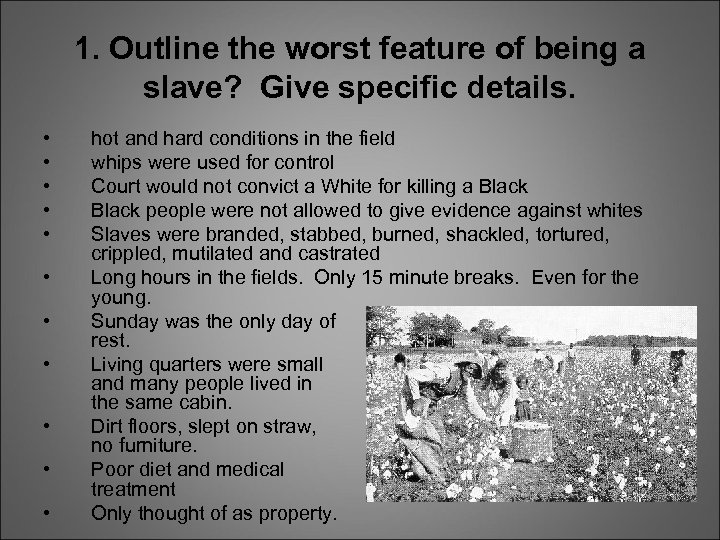 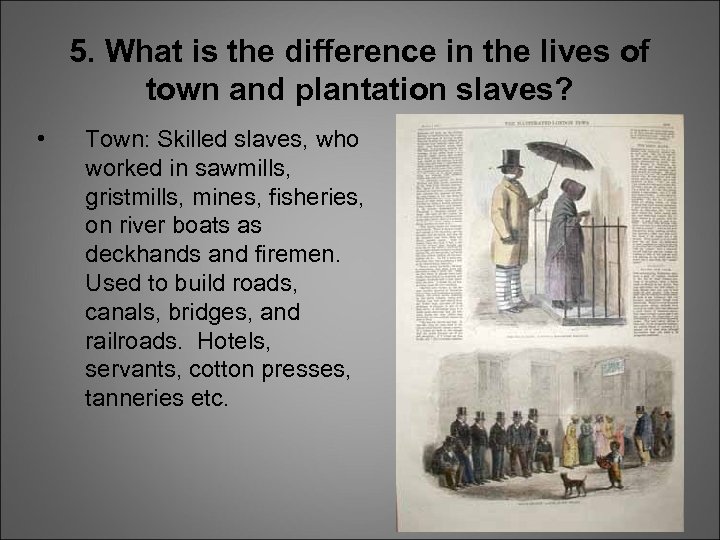 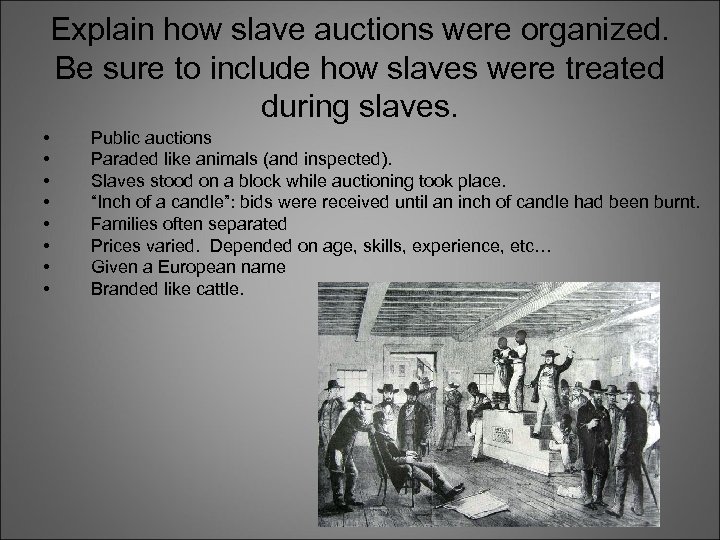 African Peoples of the Americas Pg 12 -21

1. Outline the worst feature of being a slave? Give specific details. • • • hot and hard conditions in the field whips were used for control Court would not convict a White for killing a Black people were not allowed to give evidence against whites Slaves were branded, stabbed, burned, shackled, tortured, crippled, mutilated and castrated Long hours in the fields. Only 15 minute breaks. Even for the young. Sunday was the only day of rest. Living quarters were small and many people lived in the same cabin. Dirt floors, slept on straw, no furniture. Poor diet and medical treatment Only thought of as property.

2. What was the attitude of slave owners towards their slaves? • • • Africans were nothing but brutes. Only property Whipped and beaten.

3 a. How were slaves punished by their owners? • Whipped, tortured, burned, beaten, shackled, etc… 3 b. Why did many slave owners and overseers treat their slaves so badly? • To ensure complete obedience. 3 c. Why did many slaves die before they reached the age of 40? • poor diet, lack of medical treatment, hard life.

4. Explain the difference between field hands and house servants. Field Hands: Hard work, regular punishment, poor diet, lack of medical care. House Servant: Coachman, cooks, maids and children’s nurses. Treated better, better clothes and food. It could be a punishment to be a house servant sent to the field.

5. What is the difference in the lives of town and plantation slaves? • Town: Skilled slaves, who worked in sawmills, gristmills, mines, fisheries, on river boats as deckhands and firemen. Used to build roads, canals, bridges, and railroads. Hotels, servants, cotton presses, tanneries etc.

6. Why were town slaves and those involved in industry forced to wear a numbered copper tag tied to their necks? Identification

7. What was manumission? When blacks could purchase their own liberty or freedom. They would be skilled and would work for another person. Half of their earnings went to their Master and they kept the other half to buy their freedom.

What was a scramble? Describe fully. Slaves were herded together to be sold on deck or in a nearby yard. They were sometimes sold at a fixed price per head, rather than being auctioned. The purchasers would rush and grab those they wanted to purchase.

Explain how slave auctions were organized. Be sure to include how slaves were treated during slaves. • • Public auctions Paraded like animals (and inspected). Slaves stood on a block while auctioning took place. “Inch of a candle”: bids were received until an inch of candle had been burnt. Families often separated Prices varied. Depended on age, skills, experience, etc… Given a European name Branded like cattle.

3. Do the sources all agree about the conditions at a sale? Why or why not. • • Yes, the sources agree that the conditions were deplorable, inhumane and disgusting. They all speak of different values for the slaves, of families being split apart, of branding and the economic exchange.

1 The Civil Rights Movement We have talked

The Use of African American Vernacular English in

What is ‘slavery? ’ What is ‘human trafficking?