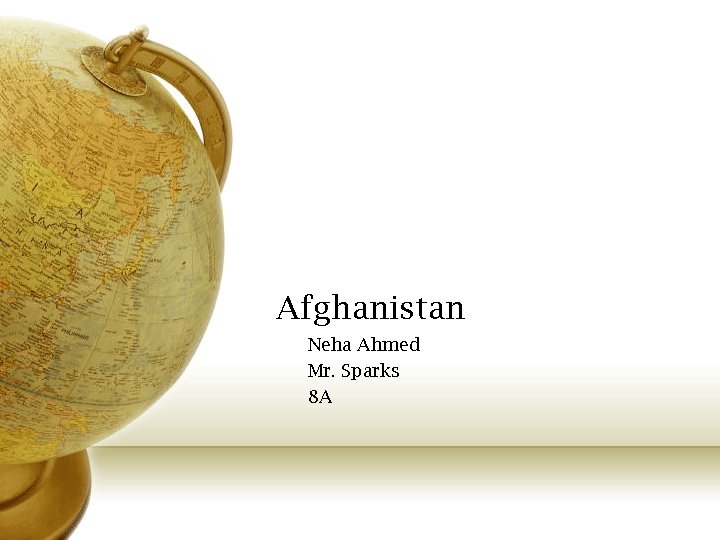 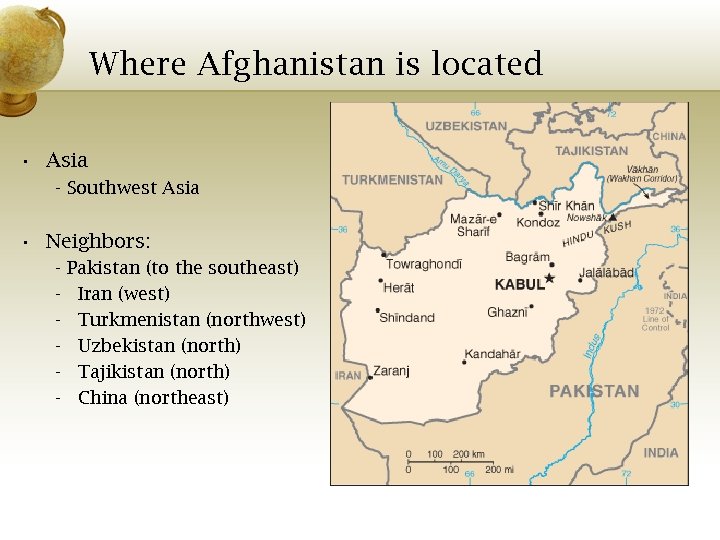 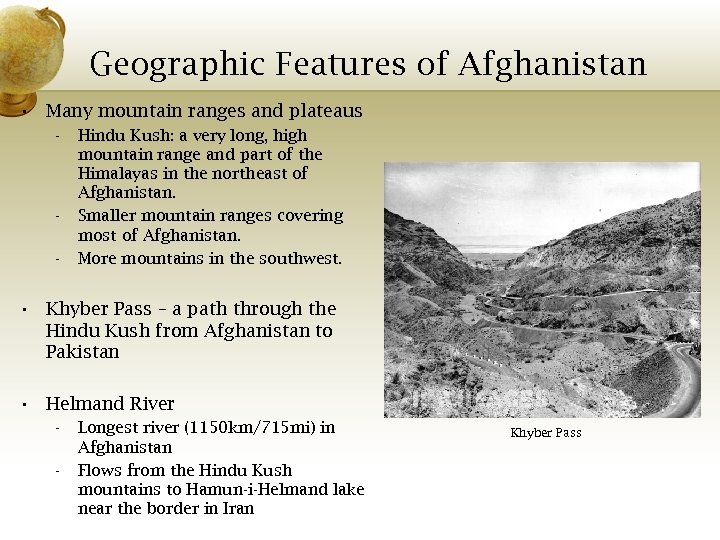 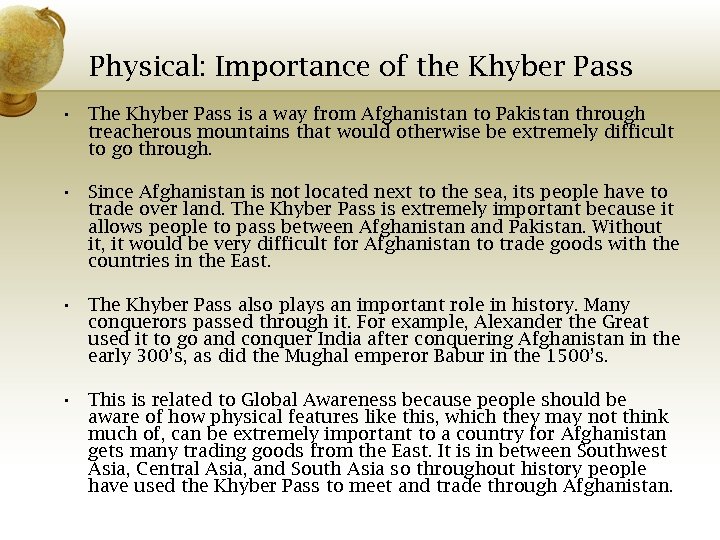 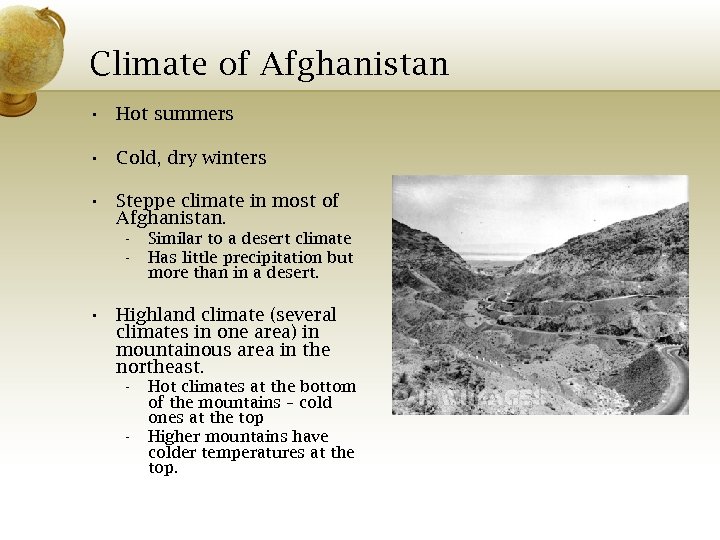 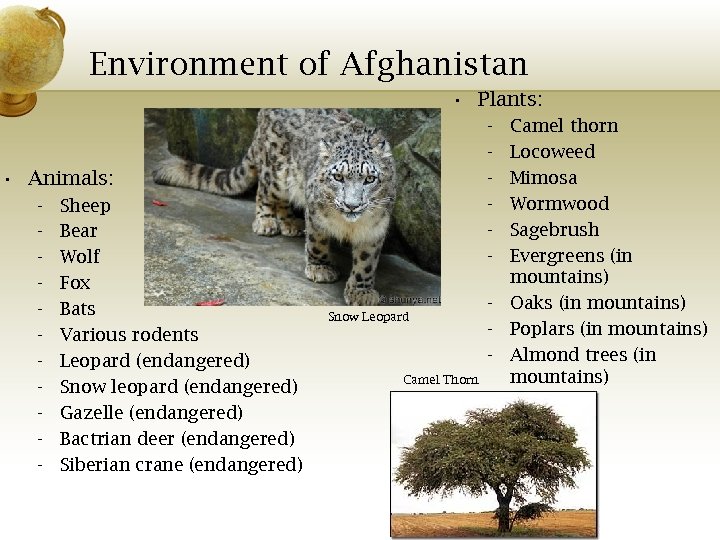 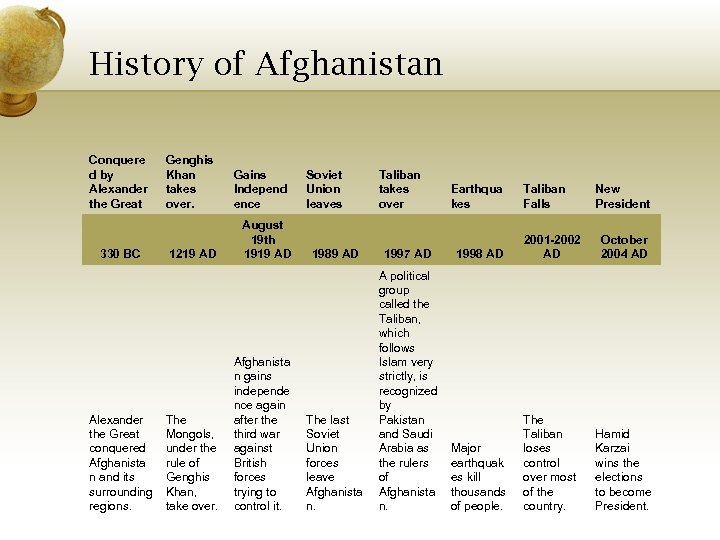 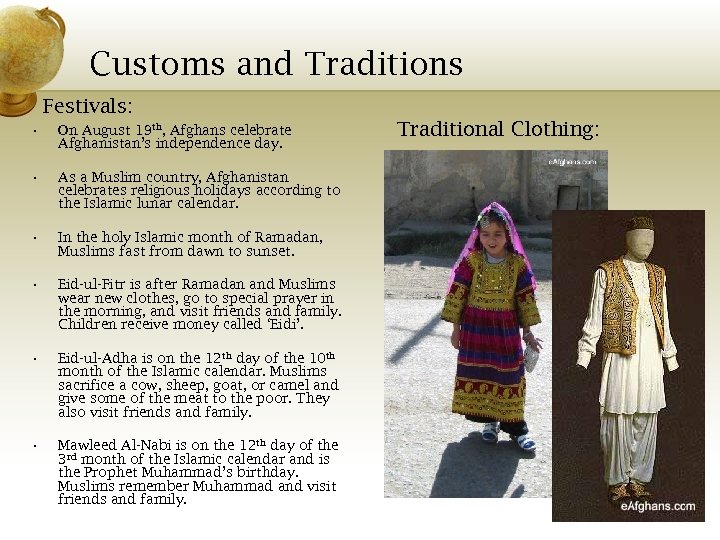 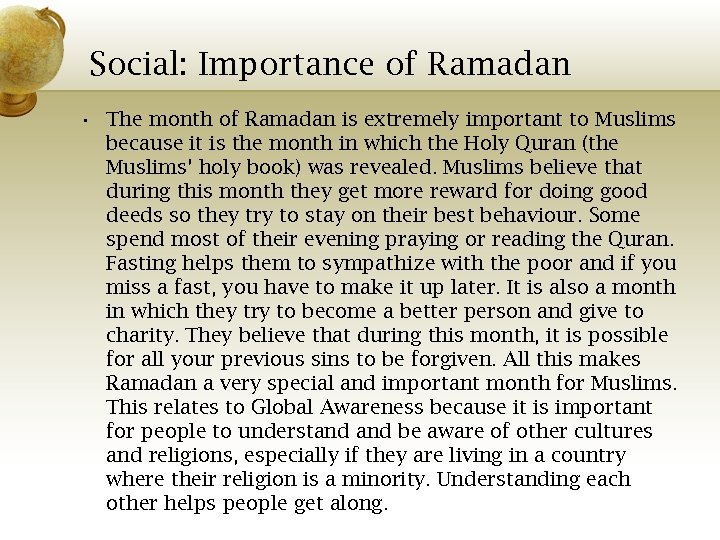 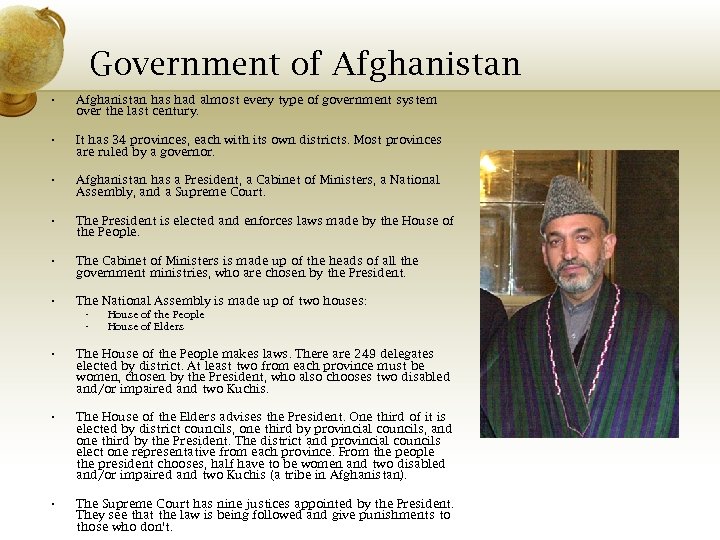 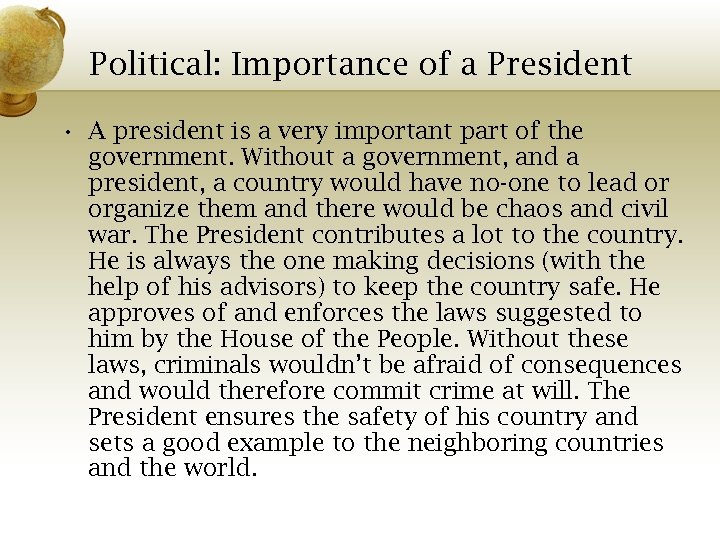 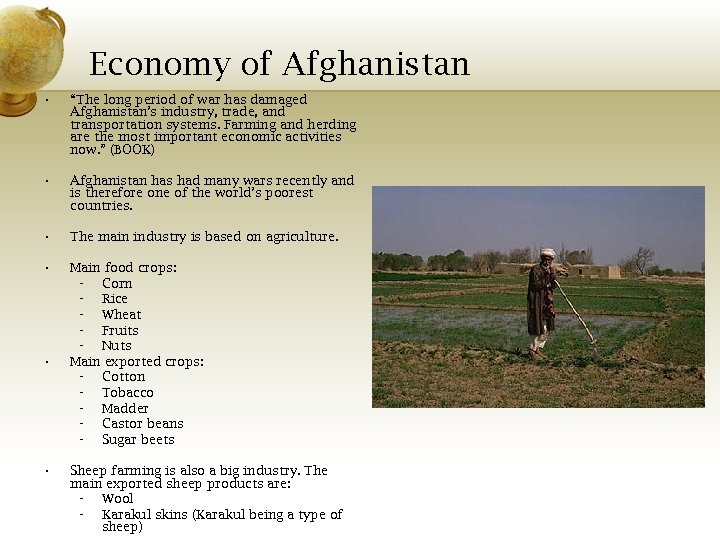 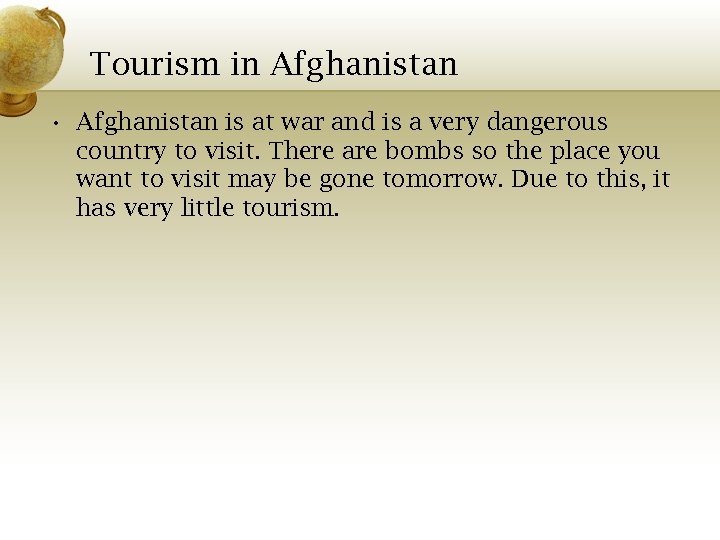 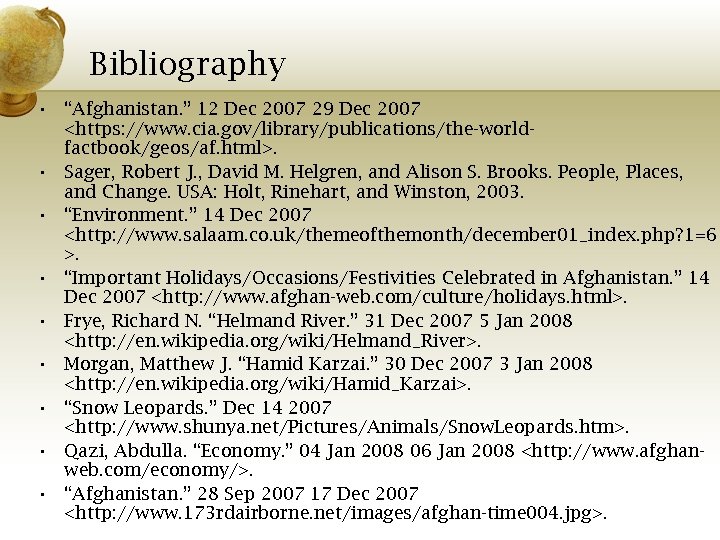 Physical: Importance of the Khyber Pass • The Khyber Pass is a way from Afghanistan to Pakistan through treacherous mountains that would otherwise be extremely difficult to go through. • Since Afghanistan is not located next to the sea, its people have to trade over land. The Khyber Pass is extremely important because it allows people to pass between Afghanistan and Pakistan. Without it, it would be very difficult for Afghanistan to trade goods with the countries in the East. • The Khyber Pass also plays an important role in history. Many conquerors passed through it. For example, Alexander the Great used it to go and conquer India after conquering Afghanistan in the early 300’s, as did the Mughal emperor Babur in the 1500’s. • This is related to Global Awareness because people should be aware of how physical features like this, which they may not think much of, can be extremely important to a country for Afghanistan gets many trading goods from the East. It is in between Southwest Asia, Central Asia, and South Asia so throughout history people have used the Khyber Pass to meet and trade through Afghanistan.

Climate of Afghanistan • Hot summers • Cold, dry winters • Steppe climate in most of Afghanistan. - Similar to a desert climate Has little precipitation but more than in a desert. • Highland climate (several climates in one area) in mountainous area in the northeast. - Hot climates at the bottom of the mountains – cold ones at the top Higher mountains have colder temperatures at the top.

Customs and Traditions Festivals: • On August 19 th, Afghans celebrate Afghanistan’s independence day. • As a Muslim country, Afghanistan celebrates religious holidays according to the Islamic lunar calendar. • In the holy Islamic month of Ramadan, Muslims fast from dawn to sunset. • Eid-ul-Fitr is after Ramadan and Muslims wear new clothes, go to special prayer in the morning, and visit friends and family. Children receive money called ‘Eidi’. • Eid-ul-Adha is on the 12 th day of the 10 th month of the Islamic calendar. Muslims sacrifice a cow, sheep, goat, or camel and give some of the meat to the poor. They also visit friends and family. • Mawleed Al-Nabi is on the 12 th day of the 3 rd month of the Islamic calendar and is the Prophet Muhammad’s birthday. Muslims remember Muhammad and visit friends and family. Traditional Clothing:

Social: Importance of Ramadan • The month of Ramadan is extremely important to Muslims because it is the month in which the Holy Quran (the Muslims’ holy book) was revealed. Muslims believe that during this month they get more reward for doing good deeds so they try to stay on their best behaviour. Some spend most of their evening praying or reading the Quran. Fasting helps them to sympathize with the poor and if you miss a fast, you have to make it up later. It is also a month in which they try to become a better person and give to charity. They believe that during this month, it is possible for all your previous sins to be forgiven. All this makes Ramadan a very special and important month for Muslims. This relates to Global Awareness because it is important for people to understand be aware of other cultures and religions, especially if they are living in a country where their religion is a minority. Understanding each other helps people get along.

Government of Afghanistan • Afghanistan has had almost every type of government system over the last century. • It has 34 provinces, each with its own districts. Most provinces are ruled by a governor. • Afghanistan has a President, a Cabinet of Ministers, a National Assembly, and a Supreme Court. • The President is elected and enforces laws made by the House of the People. • The Cabinet of Ministers is made up of the heads of all the government ministries, who are chosen by the President. • The National Assembly is made up of two houses: - House of the People House of Elders • The House of the People makes laws. There are 249 delegates elected by district. At least two from each province must be women, chosen by the President, who also chooses two disabled and/or impaired and two Kuchis. • The House of the Elders advises the President. One third of it is elected by district councils, one third by provincial councils, and one third by the President. The district and provincial councils elect one representative from each province. From the people the president chooses, half have to be women and two disabled and/or impaired and two Kuchis (a tribe in Afghanistan). • The Supreme Court has nine justices appointed by the President. They see that the law is being followed and give punishments to those who don’t.

Political: Importance of a President • A president is a very important part of the government. Without a government, and a president, a country would have no-one to lead or organize them and there would be chaos and civil war. The President contributes a lot to the country. He is always the one making decisions (with the help of his advisors) to keep the country safe. He approves of and enforces the laws suggested to him by the House of the People. Without these laws, criminals wouldn’t be afraid of consequences and would therefore commit crime at will. The President ensures the safety of his country and sets a good example to the neighboring countries and the world.

Economy of Afghanistan • “The long period of war has damaged Afghanistan’s industry, trade, and transportation systems. Farming and herding are the most important economic activities now. ” (BOOK) • Afghanistan has had many wars recently and is therefore one of the world’s poorest countries. • The main industry is based on agriculture. • Main food crops: - Corn - Rice - Wheat - Fruits - Nuts Main exported crops: - Cotton - Tobacco - Madder - Castor beans - Sugar beets • • Sheep farming is also a big industry. The main exported sheep products are: - Wool - Karakul skins (Karakul being a type of sheep)

Tourism in Afghanistan • Afghanistan is at war and is a very dangerous country to visit. There are bombs so the place you want to visit may be gone tomorrow. Due to this, it has very little tourism.