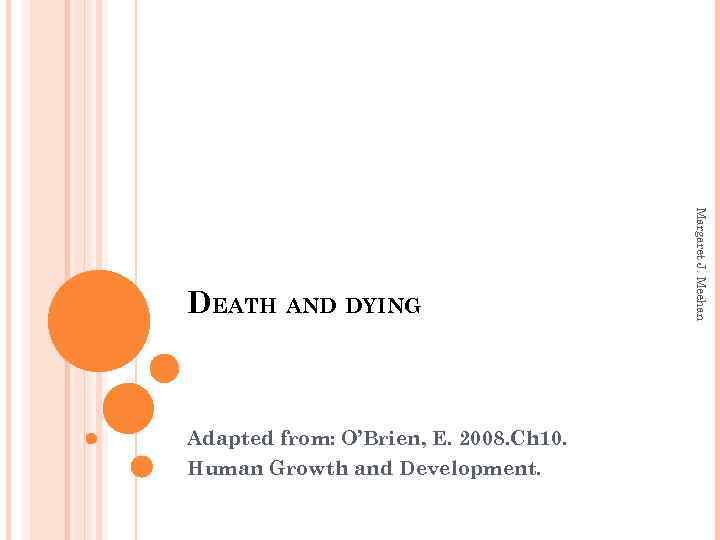 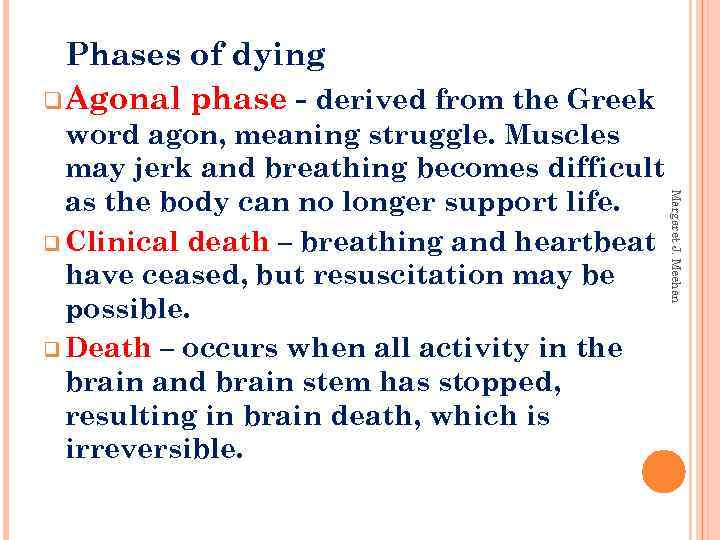 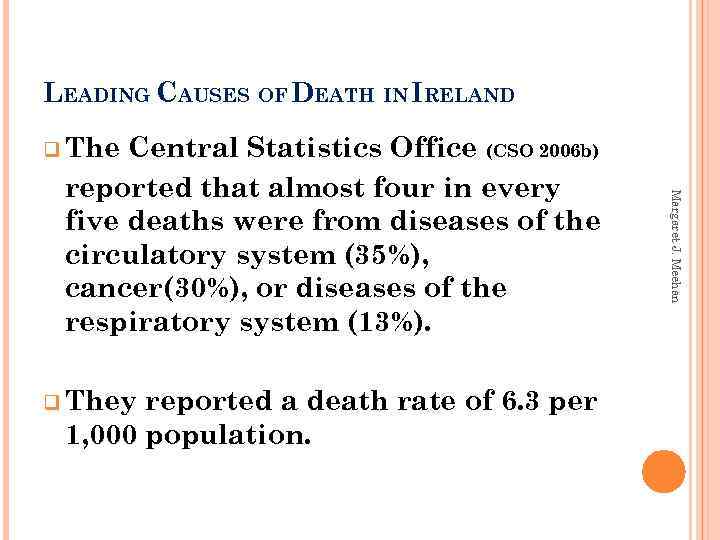 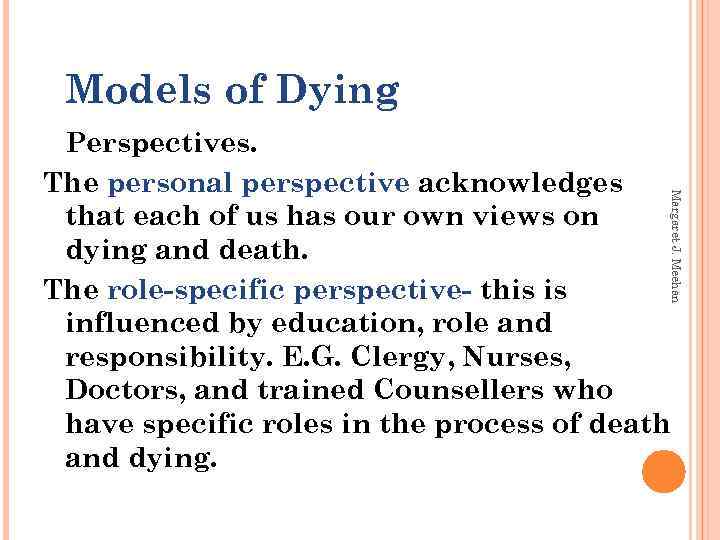 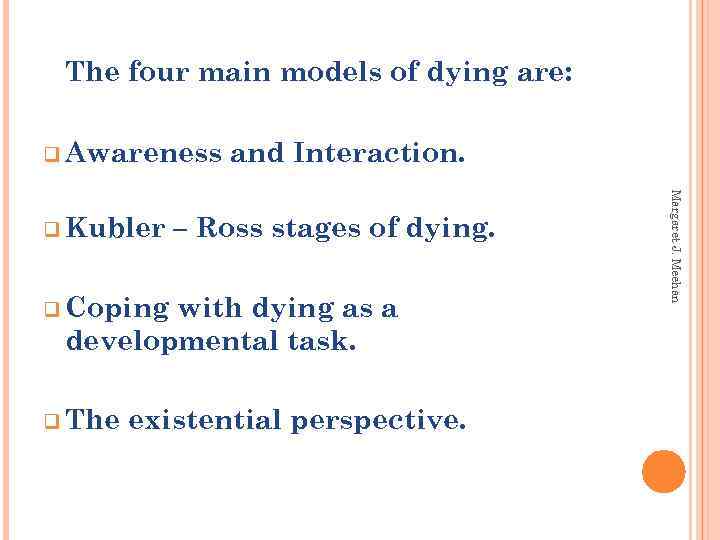 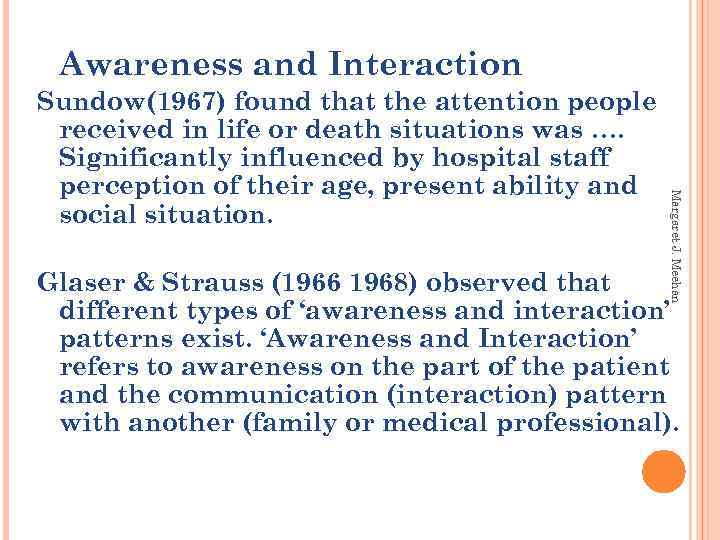 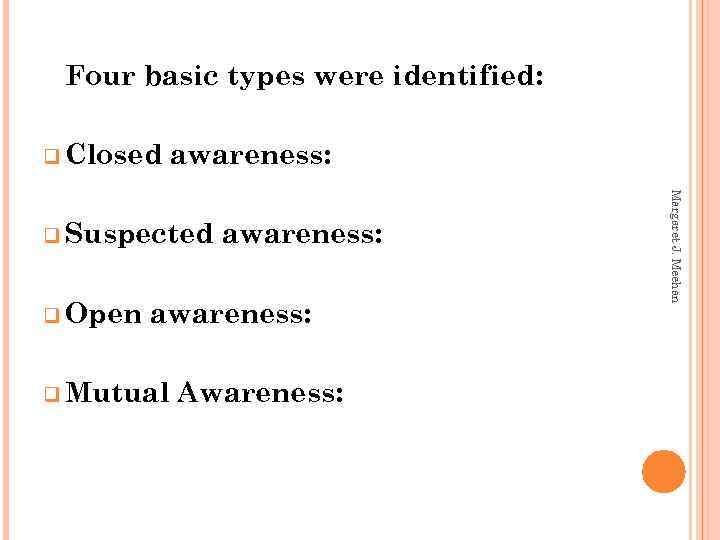 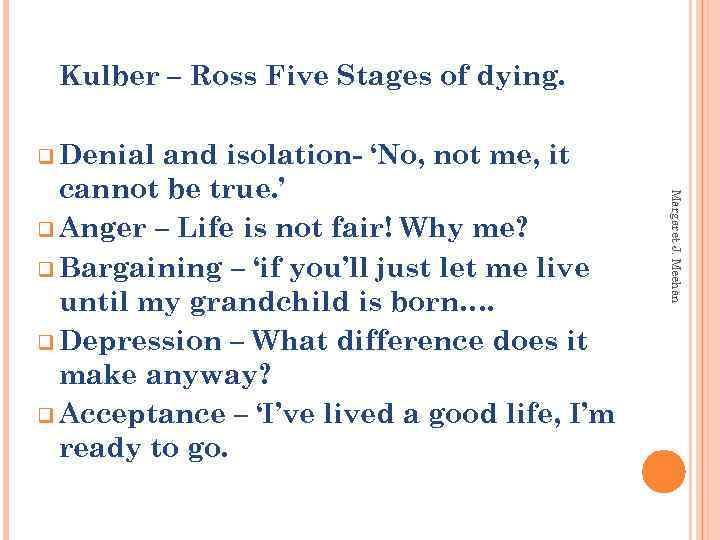 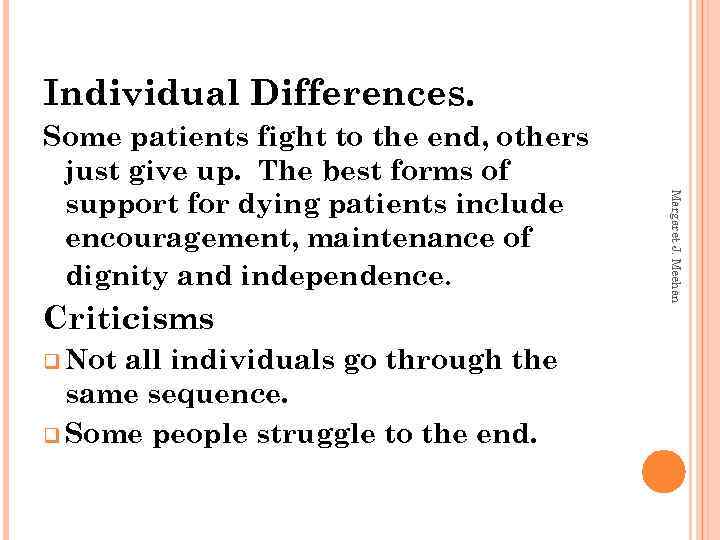 Phases of dying q Agonal phase - derived from the Greek Margaret J. Meehan word agon, meaning struggle. Muscles may jerk and breathing becomes difficult as the body can no longer support life. q Clinical death – breathing and heartbeat have ceased, but resuscitation may be possible. q Death – occurs when all activity in the brain and brain stem has stopped, resulting in brain death, which is irreversible.

LEADING CAUSES OF DEATH IN IRELAND q They reported a death rate of 6. 3 per 1, 000 population. Margaret J. Meehan Central Statistics Office (CSO 2006 b) reported that almost four in every five deaths were from diseases of the circulatory system (35%), cancer(30%), or diseases of the respiratory system (13%).

Models of Dying Margaret J. Meehan Perspectives. The personal perspective acknowledges that each of us has our own views on dying and death. The role-specific perspective- this is influenced by education, role and responsibility. E. G. Clergy, Nurses, Doctors, and trained Counsellers who have specific roles in the process of death and dying.

Awareness and Interaction Margaret J. Meehan Sundow(1967) found that the attention people received in life or death situations was …. Significantly influenced by hospital staff perception of their age, present ability and social situation. Glaser & Strauss (1966 1968) observed that different types of ‘awareness and interaction’ patterns exist. ‘Awareness and Interaction’ refers to awareness on the part of the patient and the communication (interaction) pattern with another (family or medical professional).

Kulber – Ross Five Stages of dying. q Denial Margaret J. Meehan and isolation- ‘No, not me, it cannot be true. ’ q Anger – Life is not fair! Why me? q Bargaining – ‘if you’ll just let me live until my grandchild is born…. q Depression – What difference does it make anyway? q Acceptance – ‘I’ve lived a good life, I’m ready to go.

Individual Differences. Criticisms q Not all individuals go through the same sequence. q Some people struggle to the end. Margaret J. Meehan Some patients fight to the end, others just give up. The best forms of support for dying patients include encouragement, maintenance of dignity and independence.