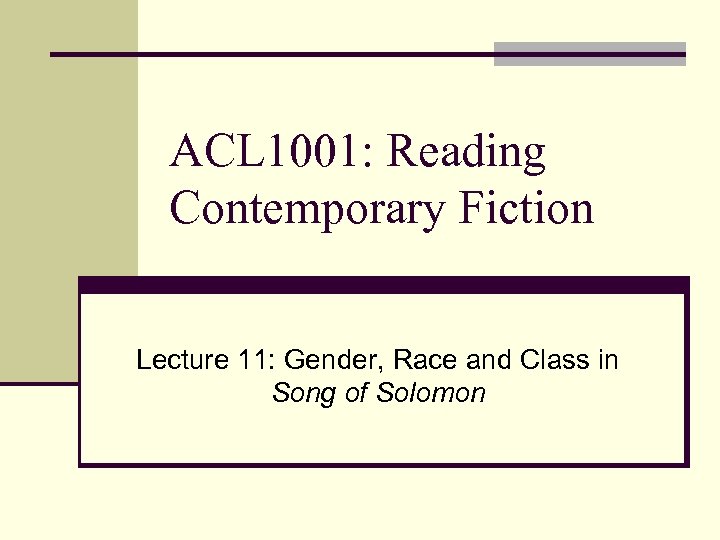 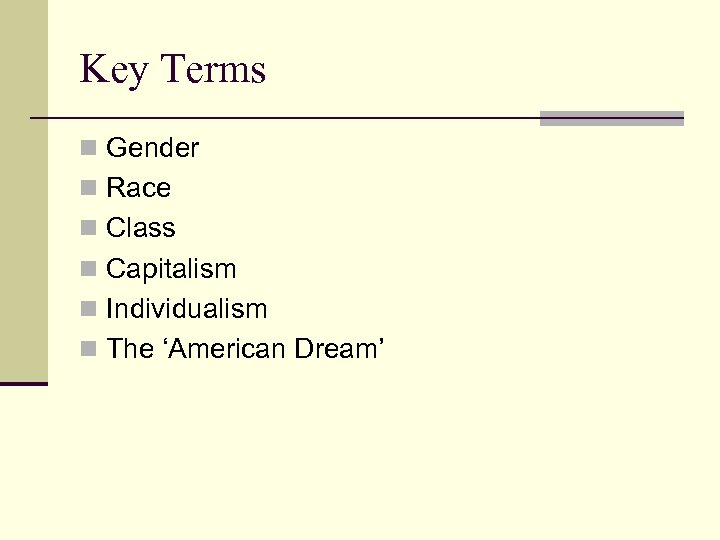 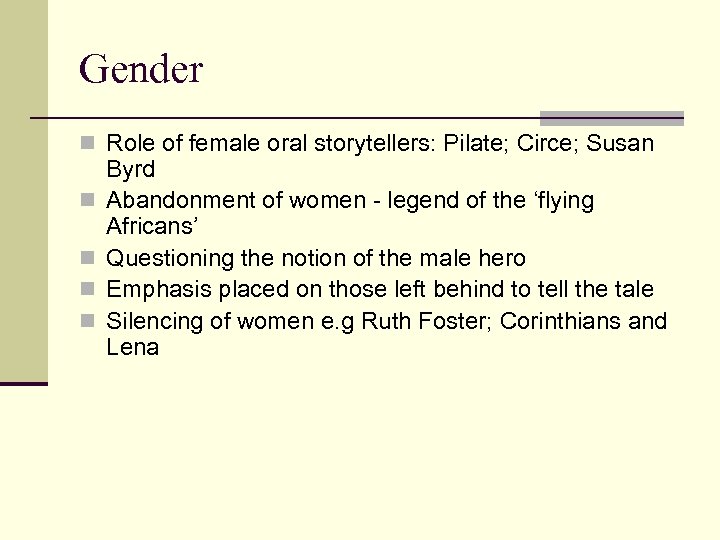 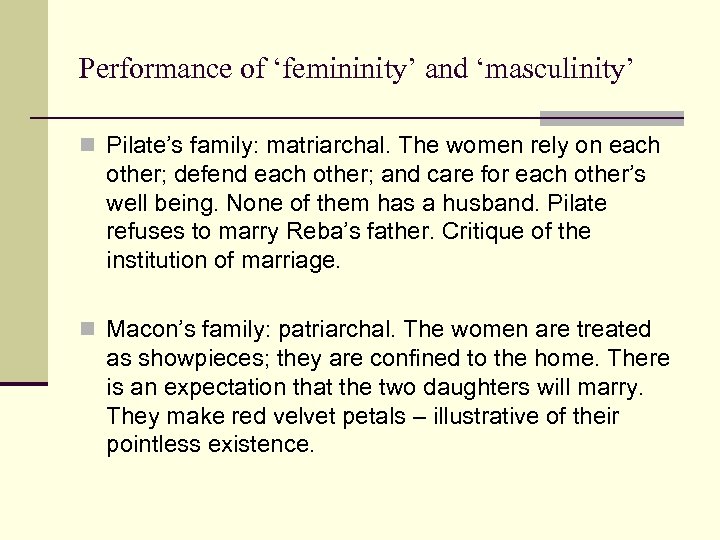 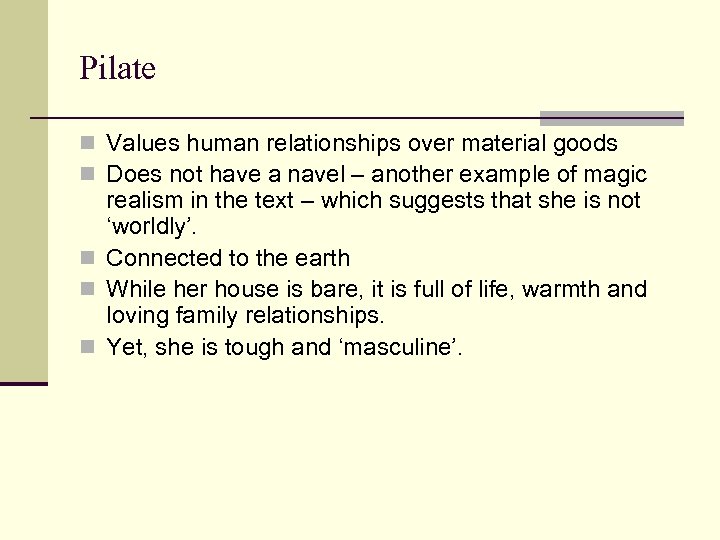 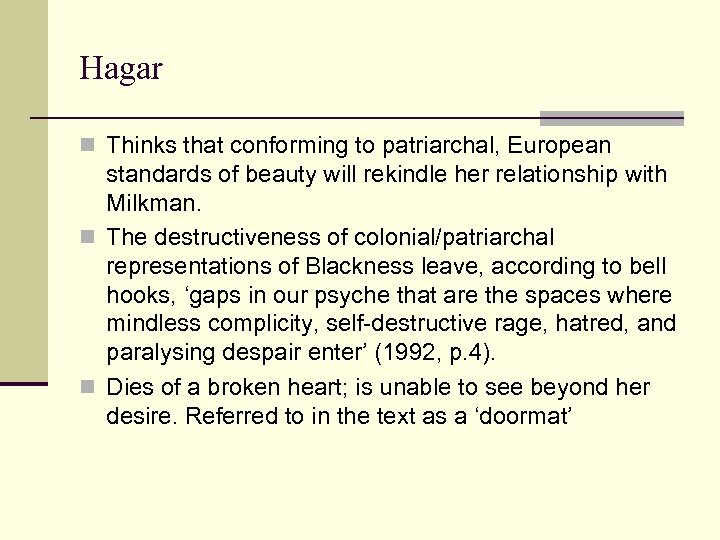 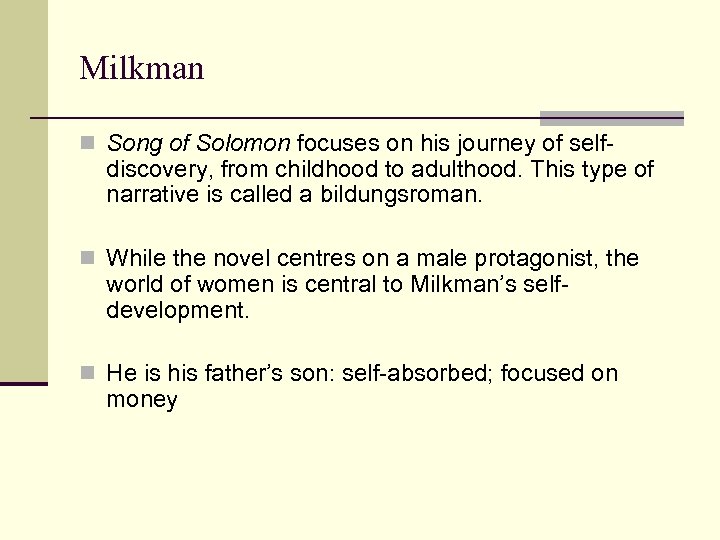 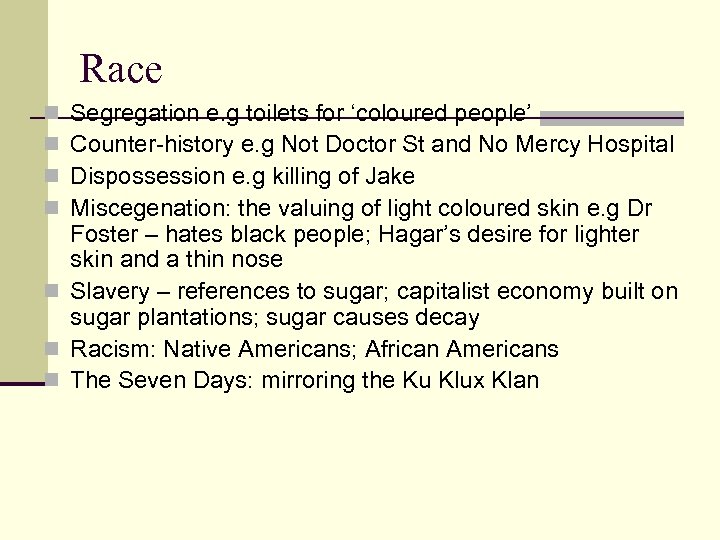 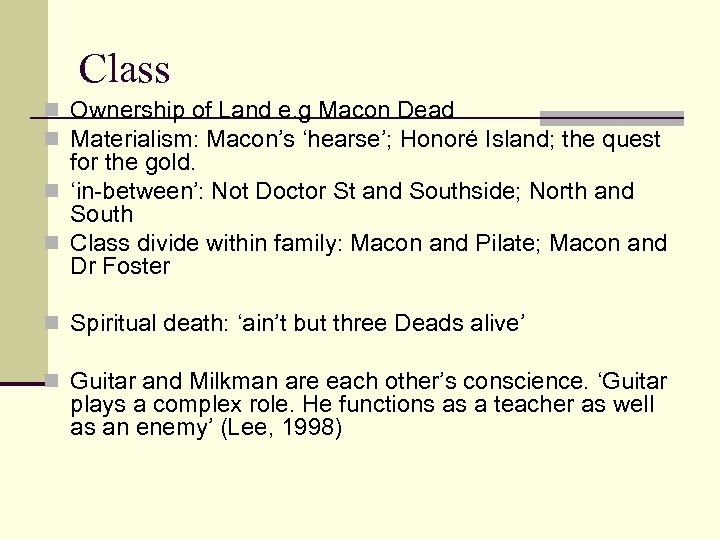 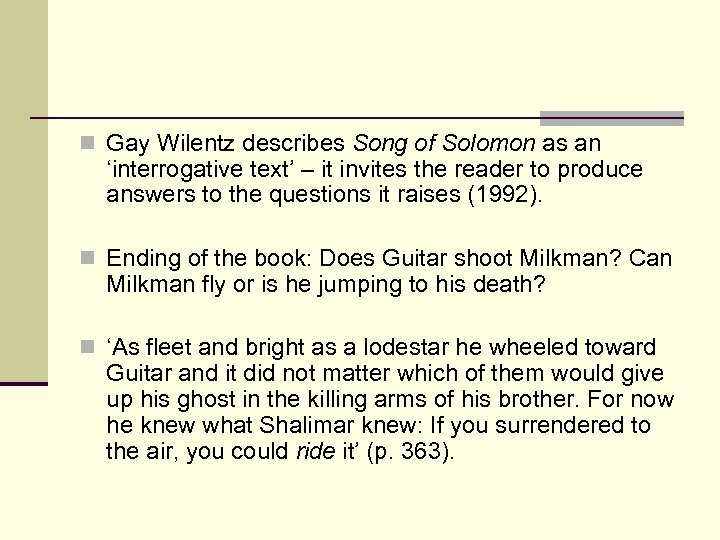 Performance of ‘femininity’ and ‘masculinity’ n Pilate’s family: matriarchal. The women rely on each other; defend each other; and care for each other’s well being. None of them has a husband. Pilate refuses to marry Reba’s father. Critique of the institution of marriage. n Macon’s family: patriarchal. The women are treated as showpieces; they are confined to the home. There is an expectation that the two daughters will marry. They make red velvet petals – illustrative of their pointless existence.

Pilate n Values human relationships over material goods n Does not have a navel – another example of magic realism in the text – which suggests that she is not ‘worldly’. n Connected to the earth n While her house is bare, it is full of life, warmth and loving family relationships. n Yet, she is tough and ‘masculine’.

Hagar n Thinks that conforming to patriarchal, European standards of beauty will rekindle her relationship with Milkman. n The destructiveness of colonial/patriarchal representations of Blackness leave, according to bell hooks, ‘gaps in our psyche that are the spaces where mindless complicity, self-destructive rage, hatred, and paralysing despair enter’ (1992, p. 4). n Dies of a broken heart; is unable to see beyond her desire. Referred to in the text as a ‘doormat’

Milkman n Song of Solomon focuses on his journey of self- discovery, from childhood to adulthood. This type of narrative is called a bildungsroman. n While the novel centres on a male protagonist, the world of women is central to Milkman’s selfdevelopment. n He is his father’s son: self-absorbed; focused on money

n Symbol of Milkman’s narcissism: the white peacock n ‘Sleeping with Hagar had made him generous. Or so he thought. Wide-spirited. Or so he imagined’ (p. 69). n Thinks the gold will help him to escape; family connections and understanding his ancestry are the keys to his freedom.

n Gay Wilentz describes Song of Solomon as an ‘interrogative text’ – it invites the reader to produce answers to the questions it raises (1992). n Ending of the book: Does Guitar shoot Milkman? Can Milkman fly or is he jumping to his death? n ‘As fleet and bright as a lodestar he wheeled toward Guitar and it did not matter which of them would give up his ghost in the killing arms of his brother. For now he knew what Shalimar knew: If you surrendered to the air, you could ride it’ (p. 363).