A stable Sri Lanka and China s rise in 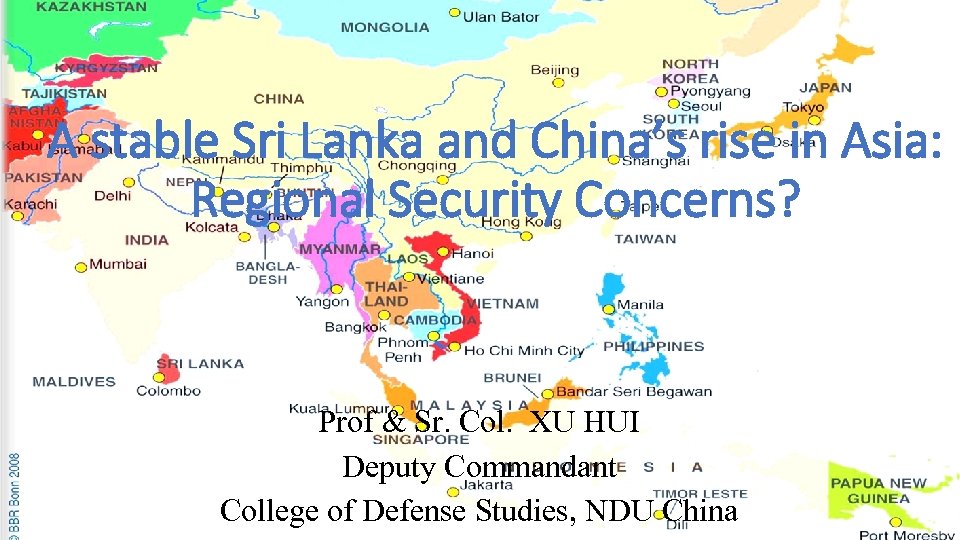 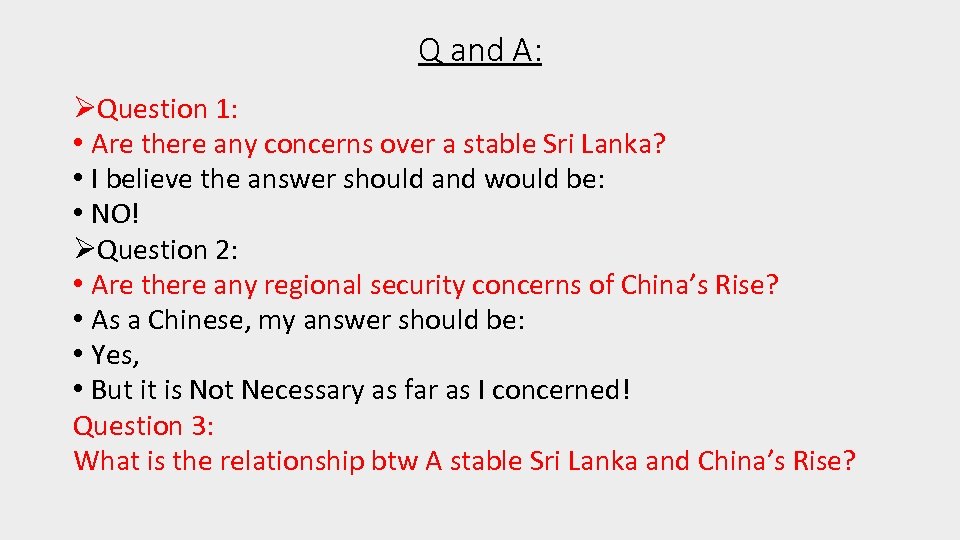 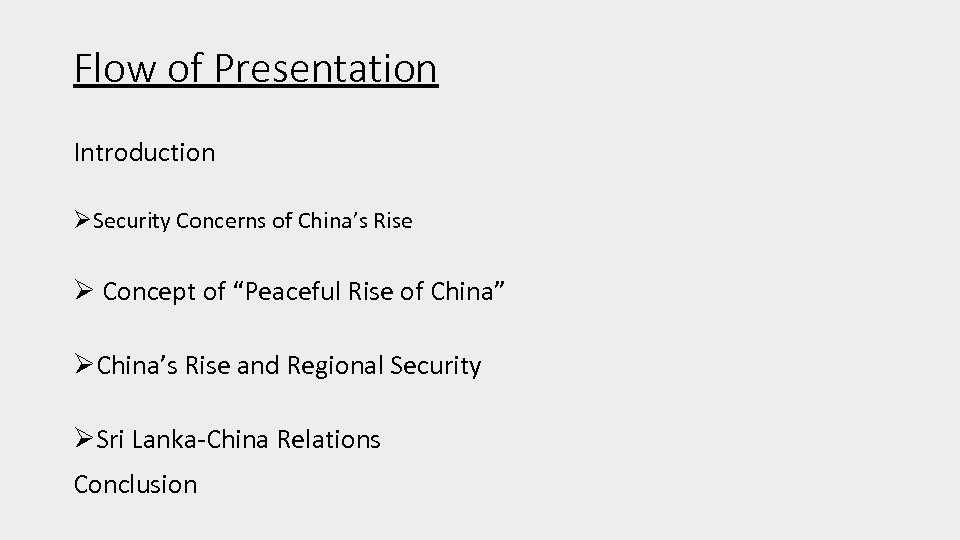 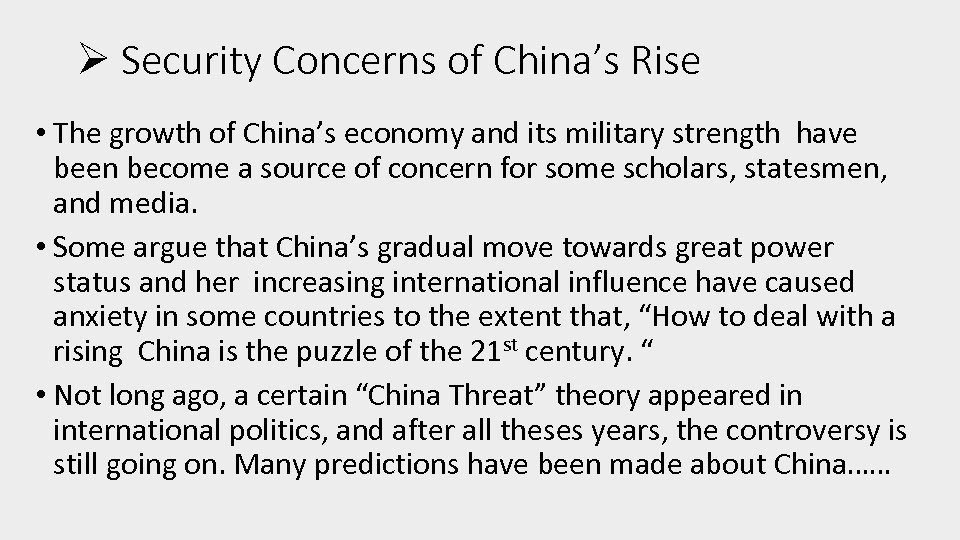 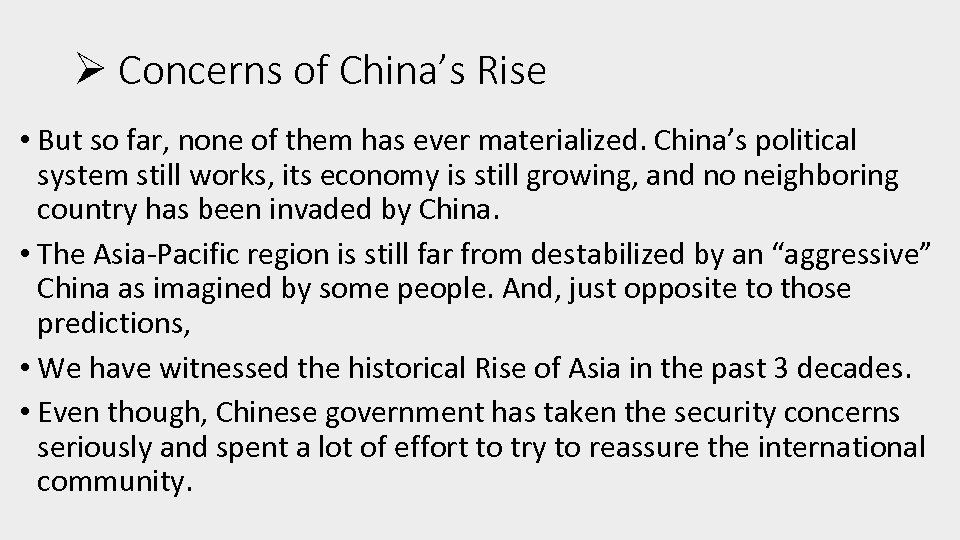 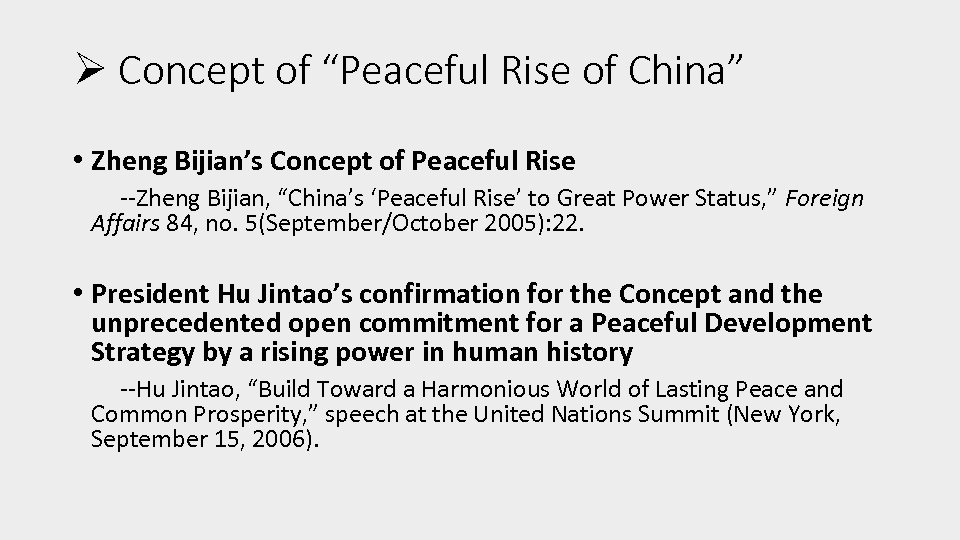 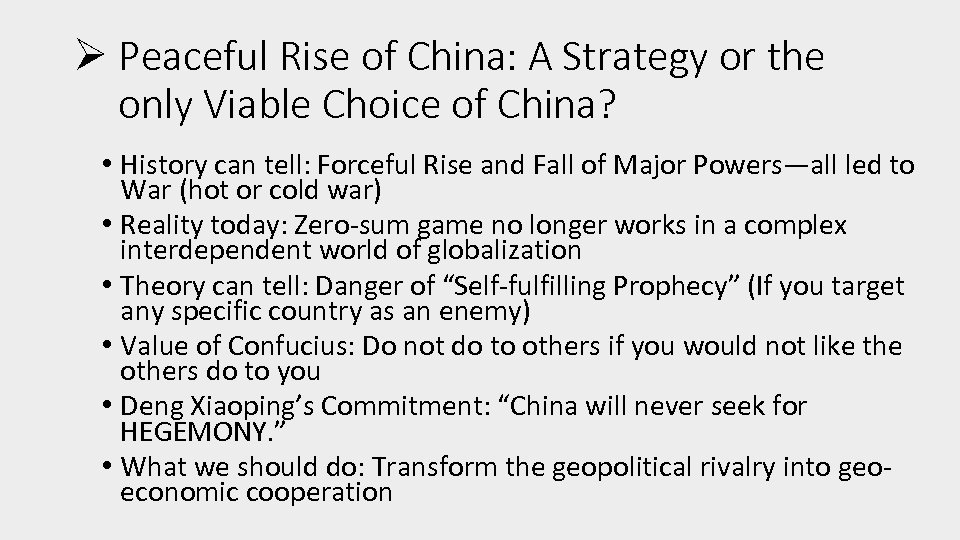 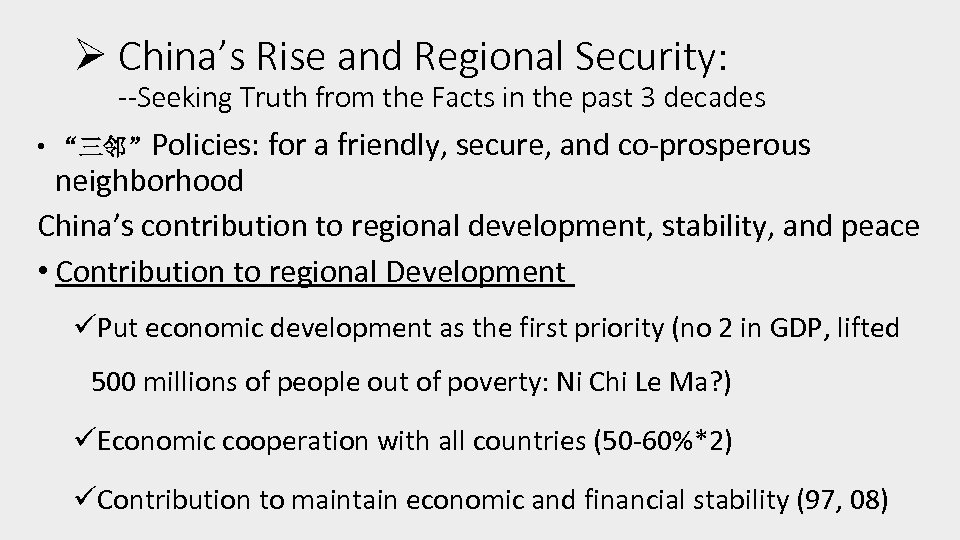 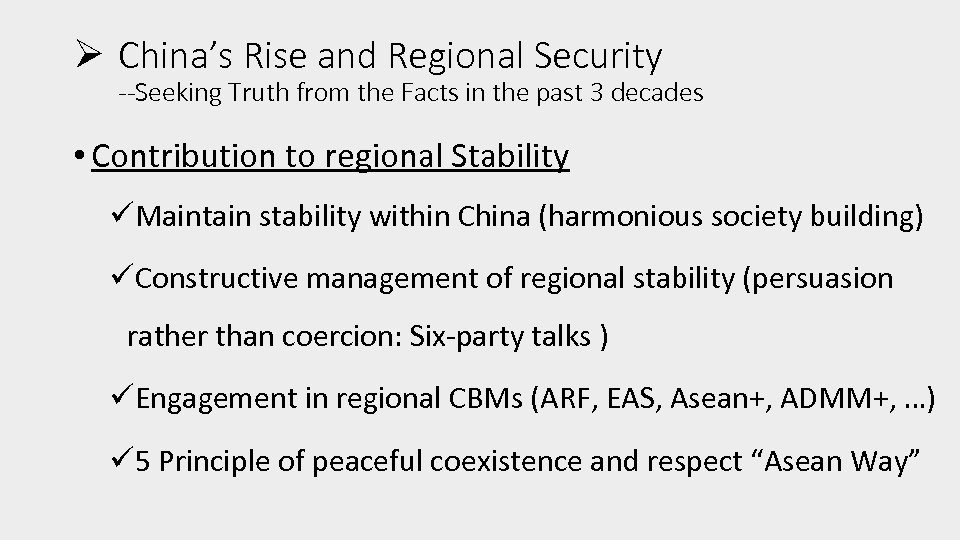 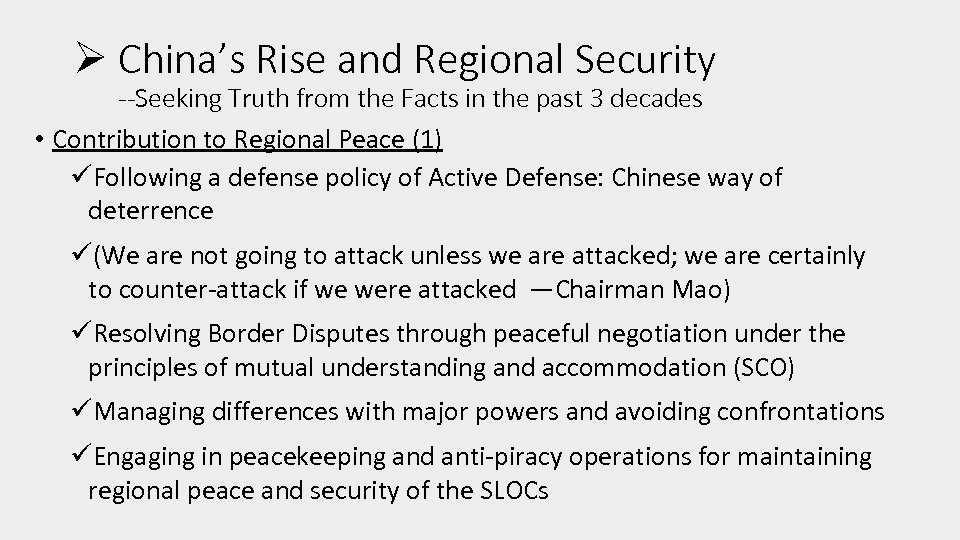 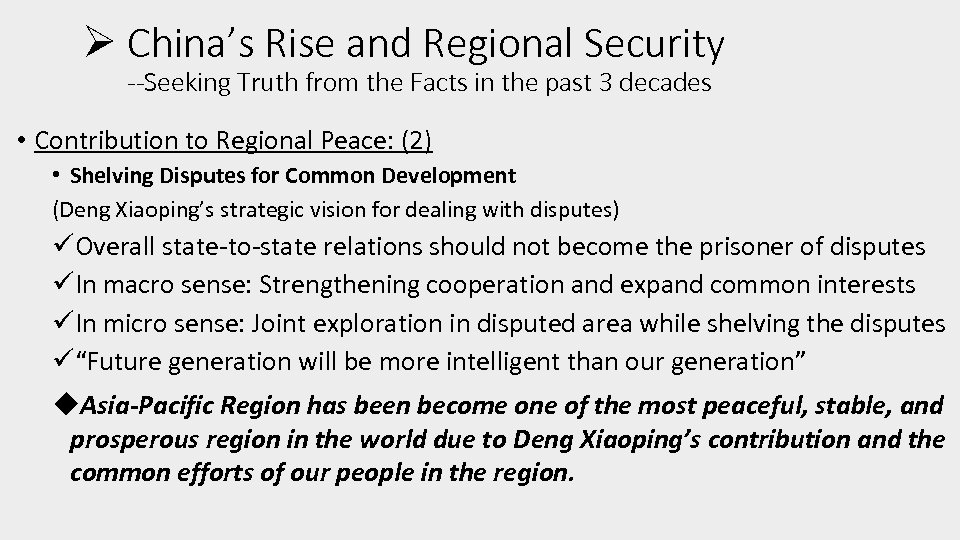 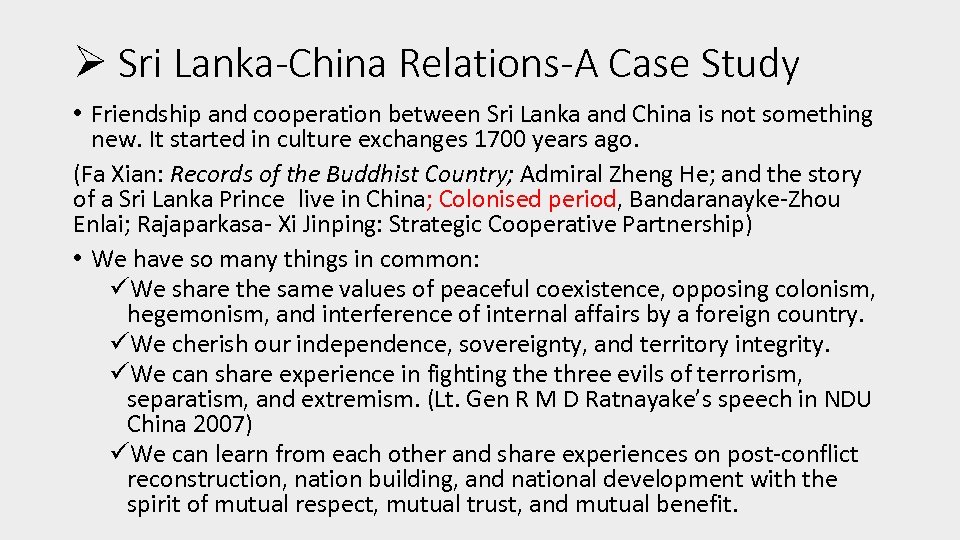 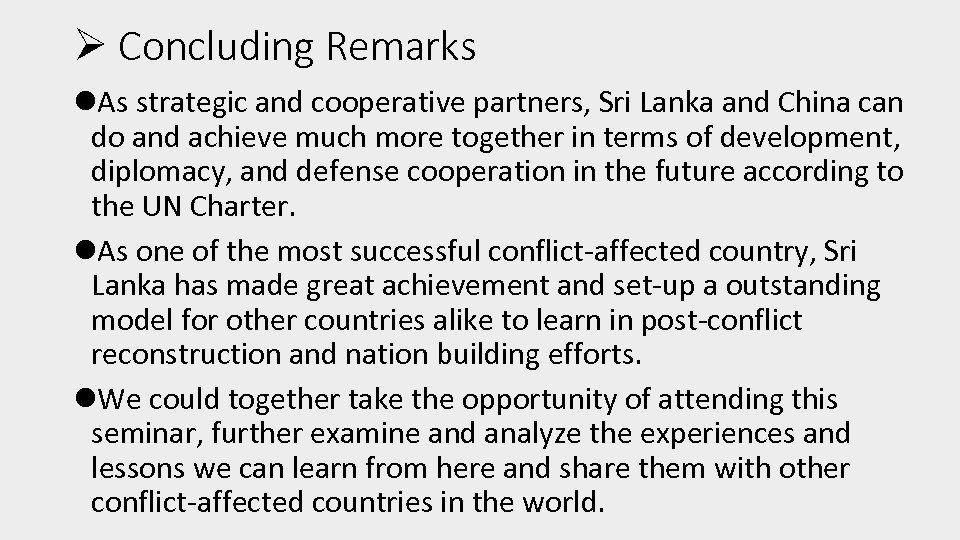 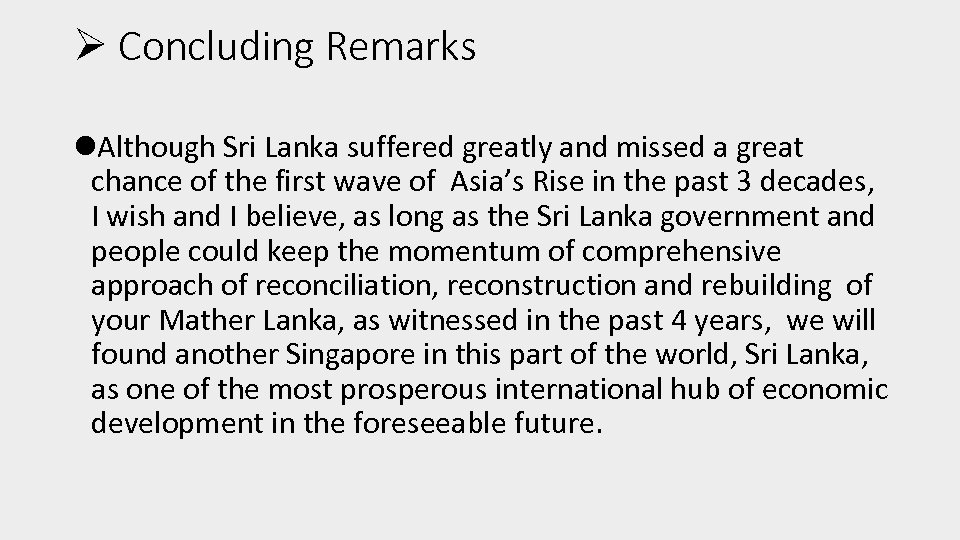 Q and A: ØQuestion 1: • Are there any concerns over a stable Sri Lanka? • I believe the answer should and would be: • NO! ØQuestion 2: • Are there any regional security concerns of China’s Rise? • As a Chinese, my answer should be: • Yes, • But it is Not Necessary as far as I concerned! Question 3: What is the relationship btw A stable Sri Lanka and China’s Rise?

Ø Security Concerns of China’s Rise • The growth of China’s economy and its military strength have been become a source of concern for some scholars, statesmen, and media. • Some argue that China’s gradual move towards great power status and her increasing international influence have caused anxiety in some countries to the extent that, “How to deal with a rising China is the puzzle of the 21 st century. “ • Not long ago, a certain “China Threat” theory appeared in international politics, and after all theses years, the controversy is still going on. Many predictions have been made about China……

Ø Concerns of China’s Rise • But so far, none of them has ever materialized. China’s political system still works, its economy is still growing, and no neighboring country has been invaded by China. • The Asia-Pacific region is still far from destabilized by an “aggressive” China as imagined by some people. And, just opposite to those predictions, • We have witnessed the historical Rise of Asia in the past 3 decades. • Even though, Chinese government has taken the security concerns seriously and spent a lot of effort to try to reassure the international community.

Ø Peaceful Rise of China: A Strategy or the only Viable Choice of China? • History can tell: Forceful Rise and Fall of Major Powers—all led to War (hot or cold war) • Reality today: Zero-sum game no longer works in a complex interdependent world of globalization • Theory can tell: Danger of “Self-fulfilling Prophecy” (If you target any specific country as an enemy) • Value of Confucius: Do not do to others if you would not like the others do to you • Deng Xiaoping’s Commitment: “China will never seek for HEGEMONY. ” • What we should do: Transform the geopolitical rivalry into geoeconomic cooperation

Ø China’s Rise and Regional Security: --Seeking Truth from the Facts in the past 3 decades • “三邻”Policies: for a friendly, secure, and co-prosperous neighborhood China’s contribution to regional development, stability, and peace • Contribution to regional Development üPut economic development as the first priority (no 2 in GDP, lifted 500 millions of people out of poverty: Ni Chi Le Ma? ) üEconomic cooperation with all countries (50 -60%*2) üContribution to maintain economic and financial stability (97, 08)

Ø China’s Rise and Regional Security --Seeking Truth from the Facts in the past 3 decades • Contribution to Regional Peace (1) üFollowing a defense policy of Active Defense: Chinese way of deterrence ü(We are not going to attack unless we are attacked; we are certainly to counter-attack if we were attacked —Chairman Mao) üResolving Border Disputes through peaceful negotiation under the principles of mutual understanding and accommodation (SCO) üManaging differences with major powers and avoiding confrontations üEngaging in peacekeeping and anti-piracy operations for maintaining regional peace and security of the SLOCs

Ø China’s Rise and Regional Security --Seeking Truth from the Facts in the past 3 decades • Contribution to Regional Peace: (2) • Shelving Disputes for Common Development (Deng Xiaoping’s strategic vision for dealing with disputes) üOverall state-to-state relations should not become the prisoner of disputes üIn macro sense: Strengthening cooperation and expand common interests üIn micro sense: Joint exploration in disputed area while shelving the disputes ü“Future generation will be more intelligent than our generation” u. Asia-Pacific Region has been become one of the most peaceful, stable, and prosperous region in the world due to Deng Xiaoping’s contribution and the common efforts of our people in the region.

Ø Sri Lanka-China Relations-A Case Study • Friendship and cooperation between Sri Lanka and China is not something new. It started in culture exchanges 1700 years ago. (Fa Xian: Records of the Buddhist Country; Admiral Zheng He; and the story of a Sri Lanka Prince live in China; Colonised period, Bandaranayke-Zhou Enlai; Rajaparkasa- Xi Jinping: Strategic Cooperative Partnership) • We have so many things in common: üWe share the same values of peaceful coexistence, opposing colonism, hegemonism, and interference of internal affairs by a foreign country. üWe cherish our independence, sovereignty, and territory integrity. üWe can share experience in fighting the three evils of terrorism, separatism, and extremism. (Lt. Gen R M D Ratnayake’s speech in NDU China 2007) üWe can learn from each other and share experiences on post-conflict reconstruction, nation building, and national development with the spirit of mutual respect, mutual trust, and mutual benefit.

Ø Concluding Remarks l. As strategic and cooperative partners, Sri Lanka and China can do and achieve much more together in terms of development, diplomacy, and defense cooperation in the future according to the UN Charter. l. As one of the most successful conflict-affected country, Sri Lanka has made great achievement and set-up a outstanding model for other countries alike to learn in post-conflict reconstruction and nation building efforts. l. We could together take the opportunity of attending this seminar, further examine and analyze the experiences and lessons we can learn from here and share them with other conflict-affected countries in the world.

Ø Concluding Remarks l. Although Sri Lanka suffered greatly and missed a great chance of the first wave of Asia’s Rise in the past 3 decades, I wish and I believe, as long as the Sri Lanka government and people could keep the momentum of comprehensive approach of reconciliation, reconstruction and rebuilding of your Mather Lanka, as witnessed in the past 4 years, we will found another Singapore in this part of the world, Sri Lanka, as one of the most prosperous international hub of economic development in the foreseeable future.