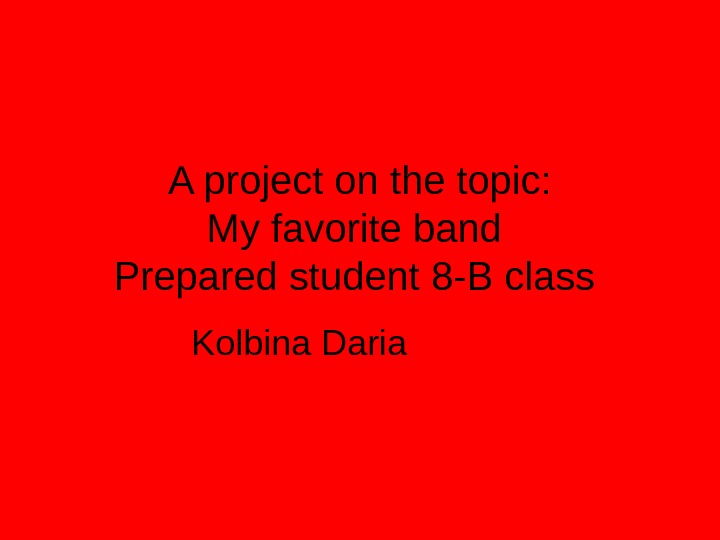 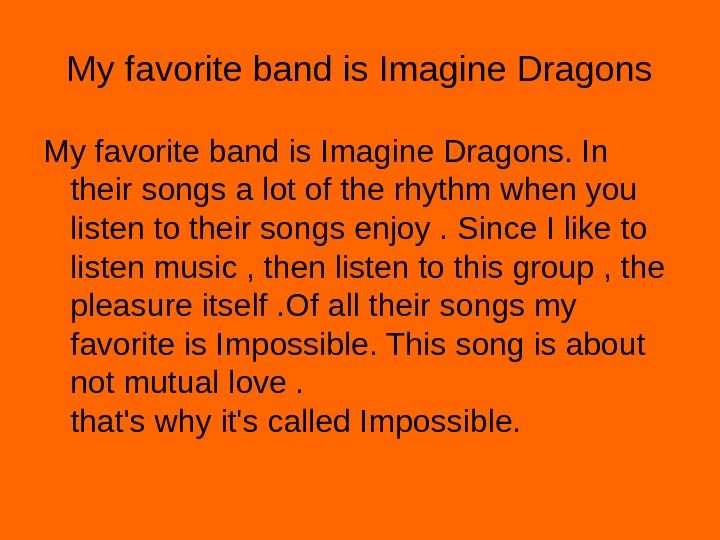 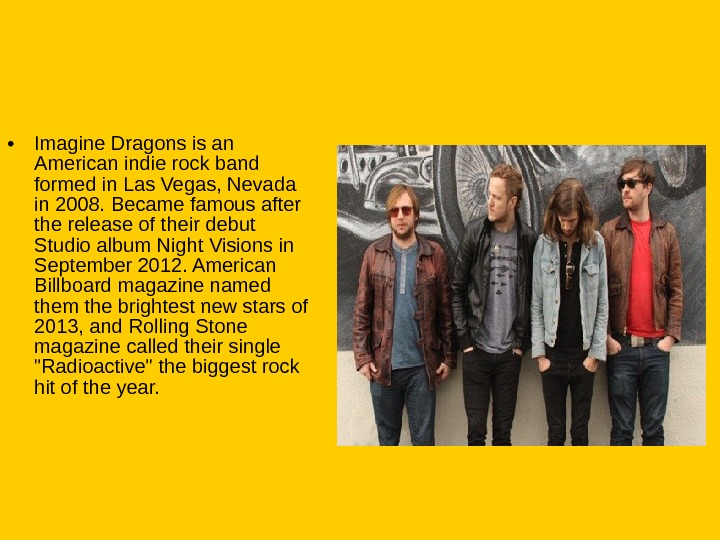 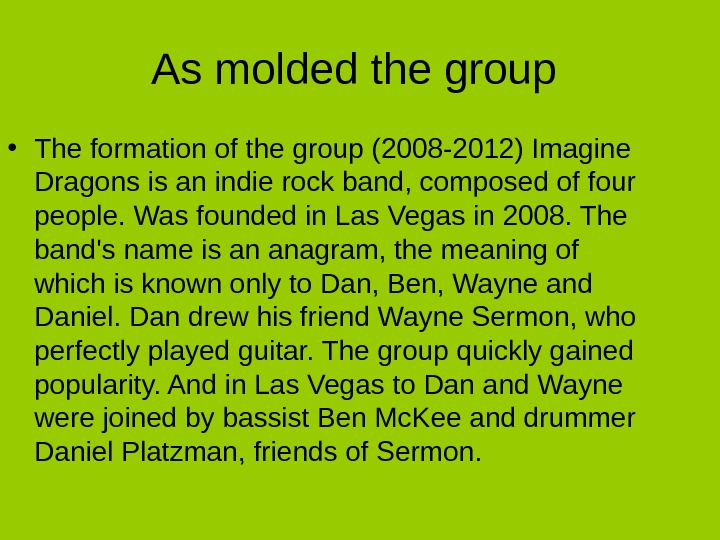 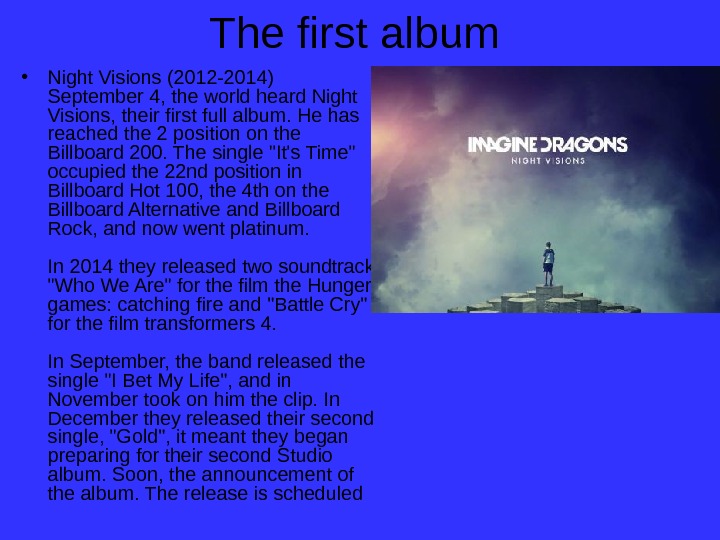 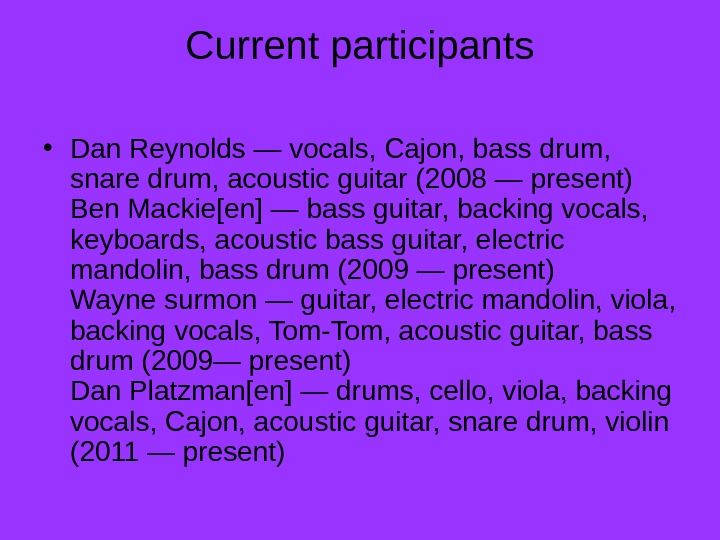 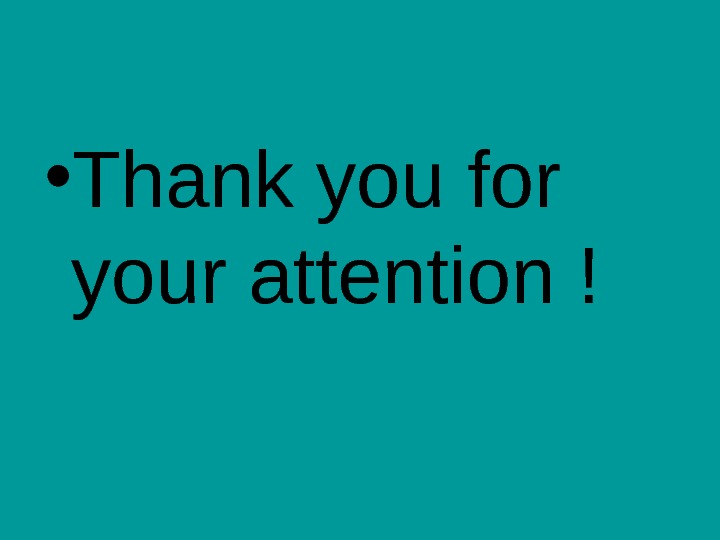 Скачать презентацию A project on the topic: My favorite band

Описание презентации A project on the topic: My favorite band по слайдам

A project on the topic: My favorite band Prepared student 8 -B class Kolbi na Daria

• Imagine Dragons is an American indie rock band formed in Las Vegas, Nevada in 2008. Became famous after the release of their debut Studio album Night Visions in September 2012. American Billboard magazine named them the brightest new stars of 2013, and Rolling Stone magazine called their single «Radioactive» the biggest rock hit of the year.

As molded the group • The formation of the group (2008 -2012) Imagine Dragons is an indie rock band, composed of four people. Was founded in Las Vegas in 2008. The band’s name is an anagram, the meaning of which is known only to Dan, Ben, Wayne and Daniel. Dan drew his friend Wayne Sermon, who perfectly played guitar. The group quickly gained popularity. And in Las Vegas to Dan and Wayne were joined by bassist Ben Mc. Kee and drummer Daniel Platzman, friends of Sermon.

The first contract • In early 2009 the guys start to work in the Studio. And on 1 February released his first EP imagine dragons. And 1 April of the following year the world saw them EPHell and silence (all of this was nominated for «Grammy» mark Needham). Both EP’s were recorded in a recording Studio battle born studios. Soon they were invited to perform at the annual festival bite of Las Vegas as «the Most requested band of 2010″ on local 107. 9 FM. They were chosen as headliners at the music festival summit Las Vegas and the Las Vegas » City. Life called them «a Band you must see live», they became «Best indie band 2010» by Las Vegas weekly, and has been awarded the «Best album of 2011» from Vegas seven magazine. In November 2011, imagine Dragons signed a contract with American record label category. They worked closely with producer Alex Da kid with whom they recorded their first disc in West Hollywood. Their EP was named continued silence and released on February 14, 2012. To the release of their debut album imagine Dragons prepared very carefully. «Releasing a series of EP, we probed the soil. We wanted our debut album was good, » he admitted in one interview Wayne.

The first album • Night Visions (2012 -2014) September 4, the world heard Night Visions, their first full album. He has reached the 2 position on the Billboard 200. The single «It’s Time» occupied the 22 nd position in Billboard Hot 100, the 4 th on the Billboard Alternative and Billboard Rock, and now went platinum. In 2014 they released two soundtrack, «Who We Are» for the film the Hunger games: catching fire and «Battle Cry» for the film transformers 4. In September, the band released the single «I Bet My Life», and in November took on him the clip. In December they released their second single, «Gold», it meant they began preparing for their second Studio album. Soon, the announcement of the album. The release is scheduled

• Thank you for your attention !