A presentation on The Nobel Prize in Medicine 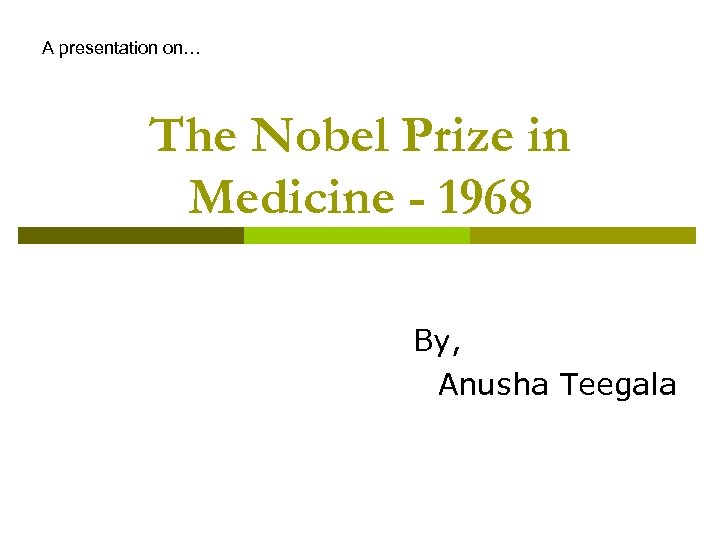 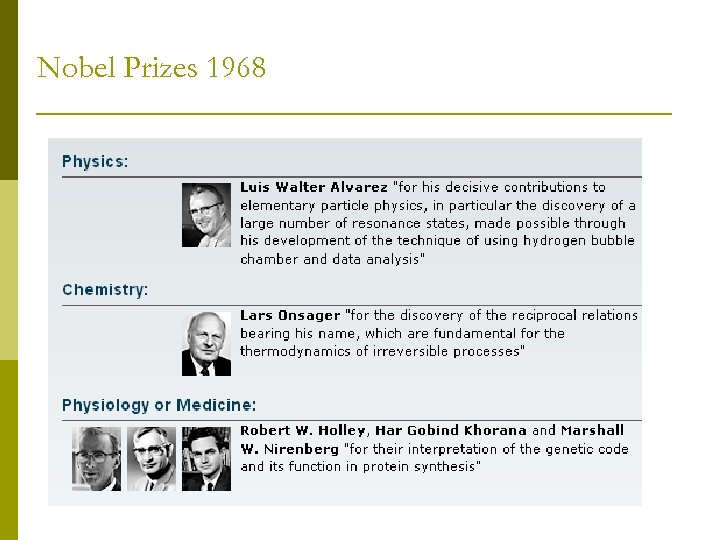 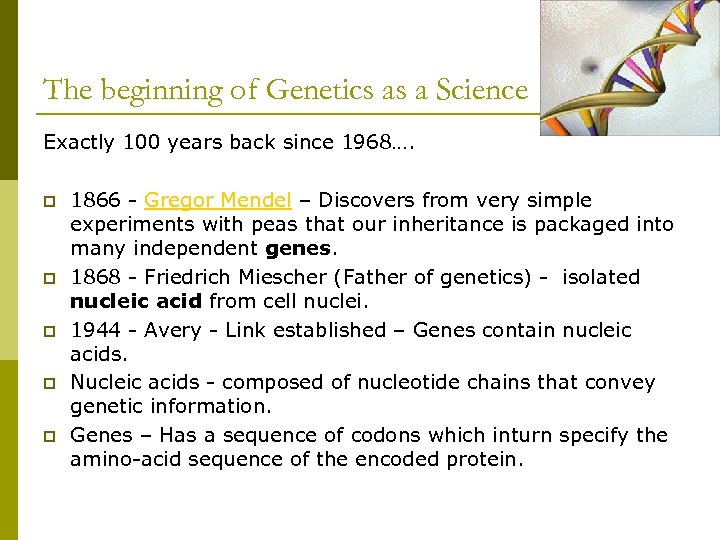 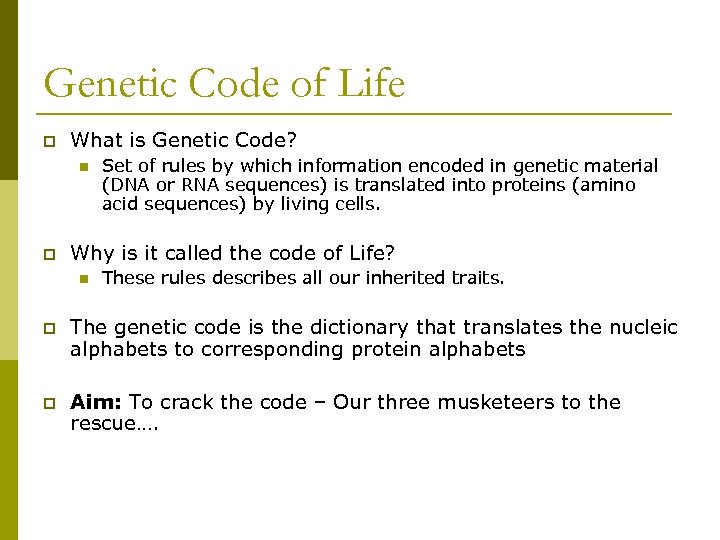 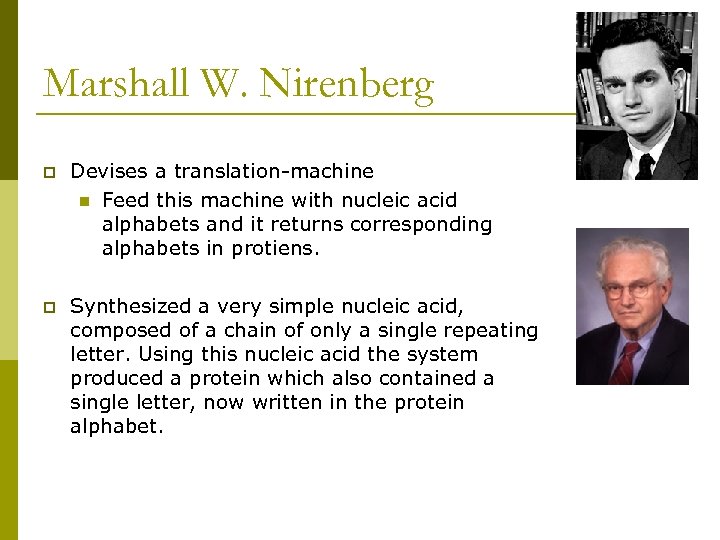 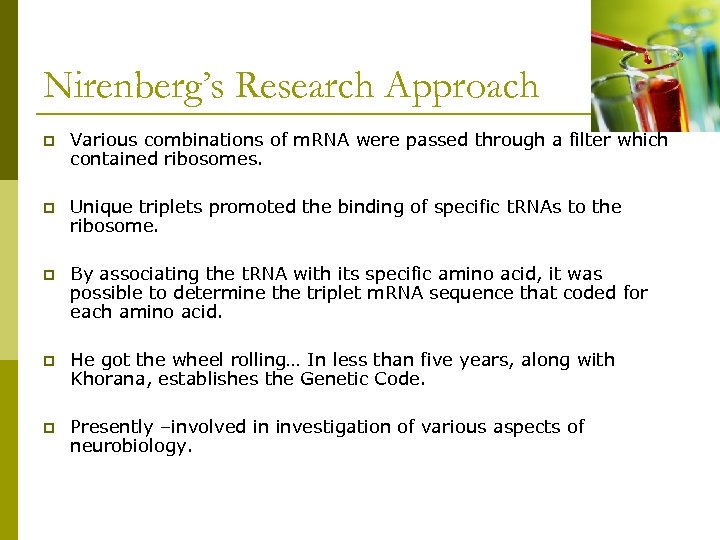 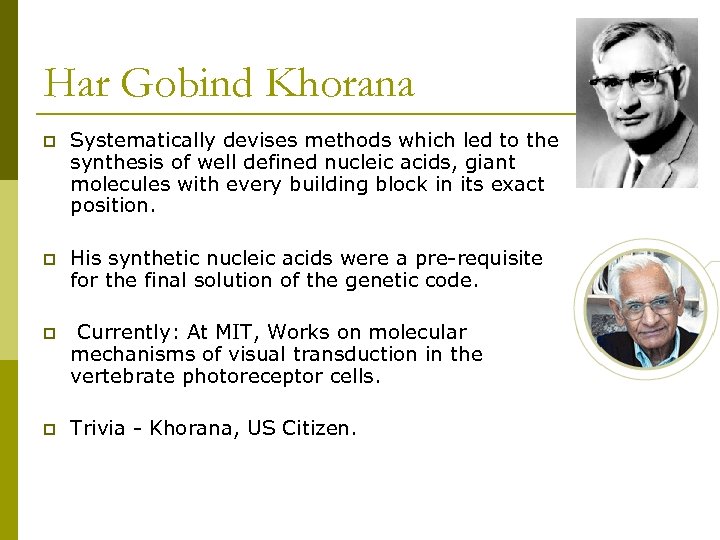 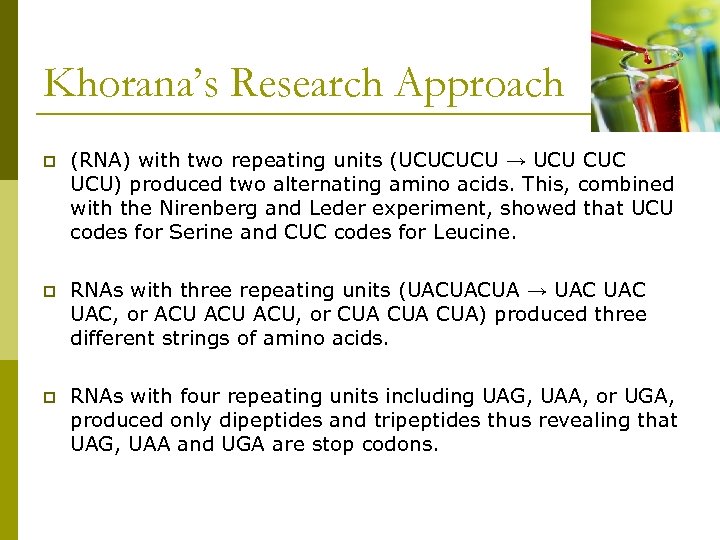 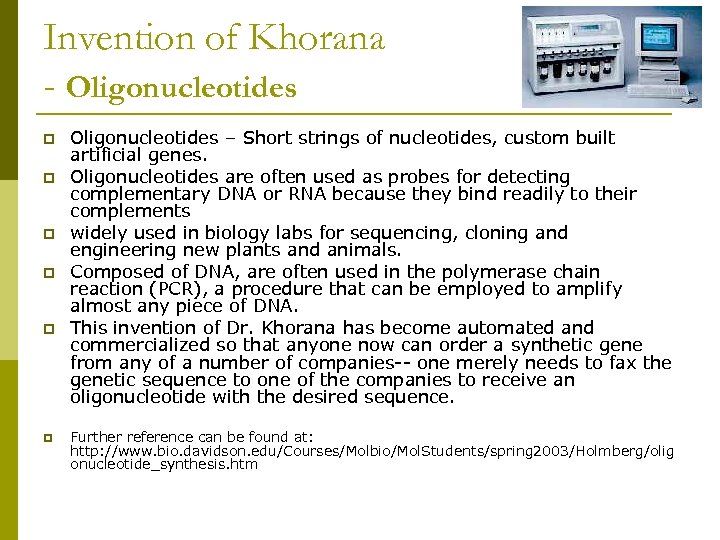 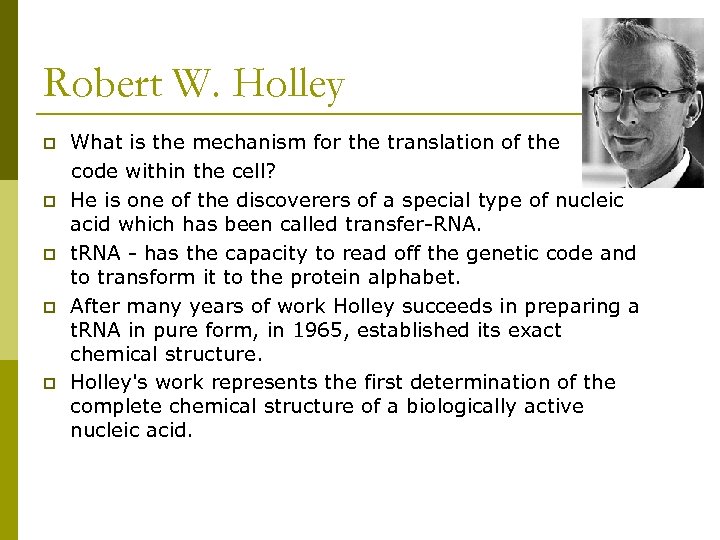 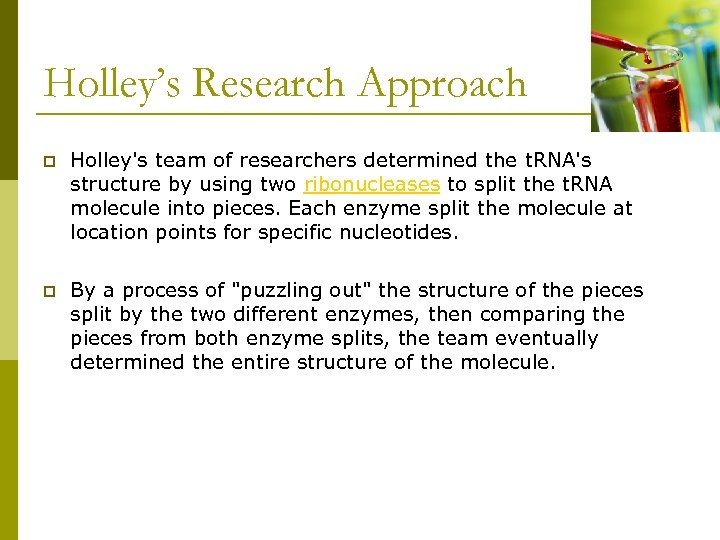 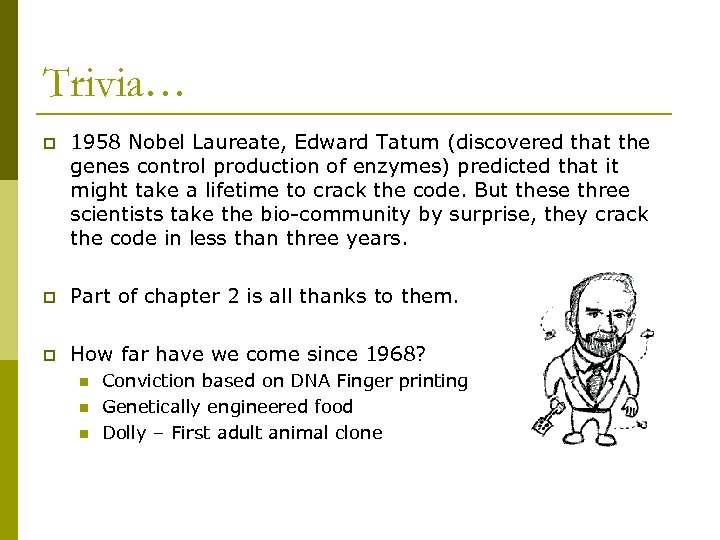 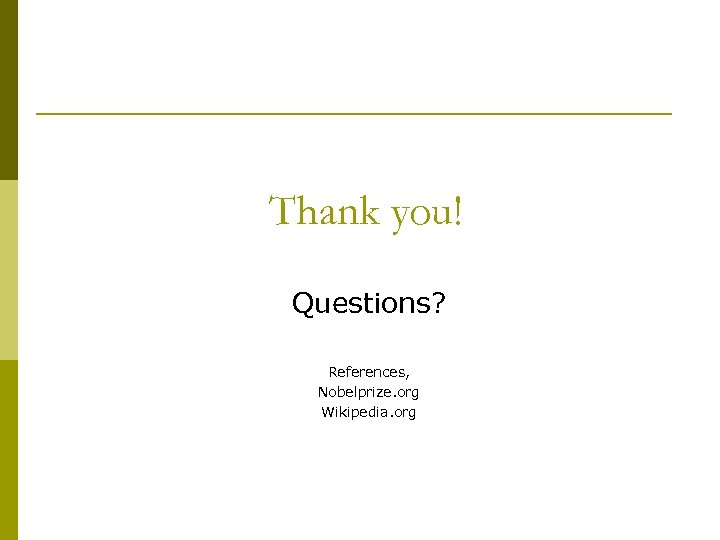 Скачать презентацию A presentation on The Nobel Prize in Medicine

A presentation on… The Nobel Prize in Medicine - 1968 By, Anusha Teegala

The beginning of Genetics as a Science Exactly 100 years back since 1968…. p p p 1866 - Gregor Mendel – Discovers from very simple experiments with peas that our inheritance is packaged into many independent genes. 1868 - Friedrich Miescher (Father of genetics) - isolated nucleic acid from cell nuclei. 1944 - Avery - Link established – Genes contain nucleic acids. Nucleic acids - composed of nucleotide chains that convey genetic information. Genes – Has a sequence of codons which inturn specify the amino-acid sequence of the encoded protein.

Genetic Code of Life p What is Genetic Code? n p Set of rules by which information encoded in genetic material (DNA or RNA sequences) is translated into proteins (amino acid sequences) by living cells. Why is it called the code of Life? n These rules describes all our inherited traits. p The genetic code is the dictionary that translates the nucleic alphabets to corresponding protein alphabets p Aim: To crack the code – Our three musketeers to the rescue….

Marshall W. Nirenberg p Devises a translation-machine n Feed this machine with nucleic acid alphabets and it returns corresponding alphabets in protiens. p Synthesized a very simple nucleic acid, composed of a chain of only a single repeating letter. Using this nucleic acid the system produced a protein which also contained a single letter, now written in the protein alphabet.

Nirenberg’s Research Approach p Various combinations of m. RNA were passed through a filter which contained ribosomes. p Unique triplets promoted the binding of specific t. RNAs to the ribosome. p By associating the t. RNA with its specific amino acid, it was possible to determine the triplet m. RNA sequence that coded for each amino acid. p He got the wheel rolling… In less than five years, along with Khorana, establishes the Genetic Code. p Presently –involved in investigation of various aspects of neurobiology.

Har Gobind Khorana p Systematically devises methods which led to the synthesis of well defined nucleic acids, giant molecules with every building block in its exact position. p His synthetic nucleic acids were a pre-requisite for the final solution of the genetic code. p Currently: At MIT, Works on molecular mechanisms of visual transduction in the vertebrate photoreceptor cells. p Trivia - Khorana, US Citizen.

Invention of Khorana - Oligonucleotides p p p Oligonucleotides – Short strings of nucleotides, custom built artificial genes. Oligonucleotides are often used as probes for detecting complementary DNA or RNA because they bind readily to their complements widely used in biology labs for sequencing, cloning and engineering new plants and animals. Composed of DNA, are often used in the polymerase chain reaction (PCR), a procedure that can be employed to amplify almost any piece of DNA. This invention of Dr. Khorana has become automated and commercialized so that anyone now can order a synthetic gene from any of a number of companies-- one merely needs to fax the genetic sequence to one of the companies to receive an oligonucleotide with the desired sequence. Further reference can be found at: http: //www. bio. davidson. edu/Courses/Molbio/Mol. Students/spring 2003/Holmberg/olig onucleotide_synthesis. htm

Robert W. Holley p p p What is the mechanism for the translation of the code within the cell? He is one of the discoverers of a special type of nucleic acid which has been called transfer-RNA. t. RNA - has the capacity to read off the genetic code and to transform it to the protein alphabet. After many years of work Holley succeeds in preparing a t. RNA in pure form, in 1965, established its exact chemical structure. Holley's work represents the first determination of the complete chemical structure of a biologically active nucleic acid.

Holley’s Research Approach p Holley's team of researchers determined the t. RNA's structure by using two ribonucleases to split the t. RNA molecule into pieces. Each enzyme split the molecule at location points for specific nucleotides. p By a process of "puzzling out" the structure of the pieces split by the two different enzymes, then comparing the pieces from both enzyme splits, the team eventually determined the entire structure of the molecule.

Trivia… p 1958 Nobel Laureate, Edward Tatum (discovered that the genes control production of enzymes) predicted that it might take a lifetime to crack the code. But these three scientists take the bio-community by surprise, they crack the code in less than three years. p Part of chapter 2 is all thanks to them. p How far have we come since 1968? n n n Conviction based on DNA Finger printing Genetically engineered food Dolly – First adult animal clone