A Nationwide 529 Plan Established by the Independent 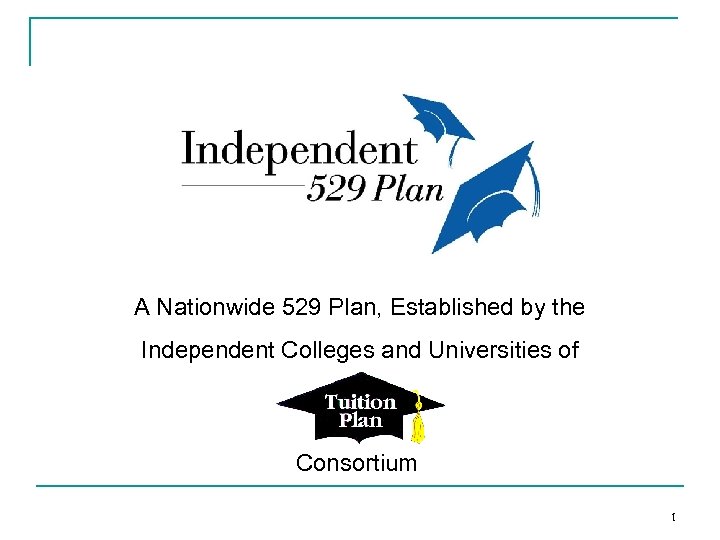 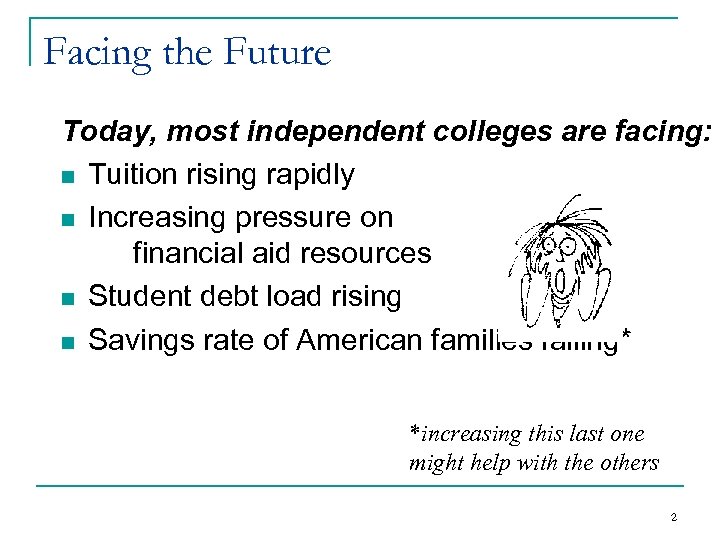 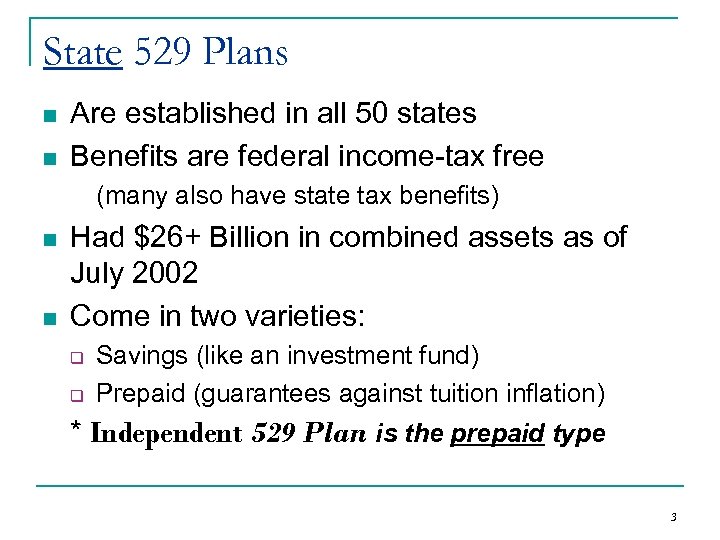 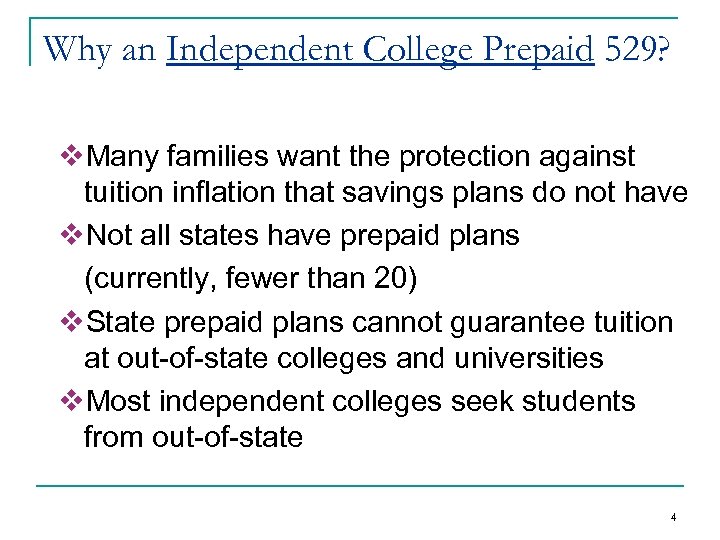 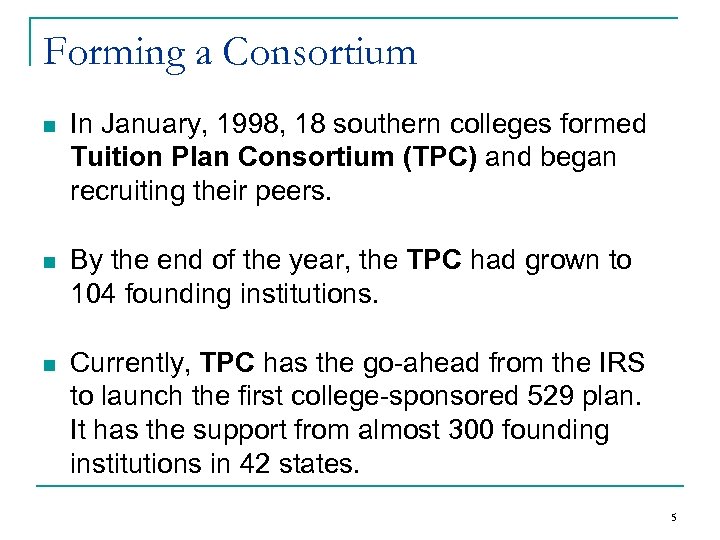 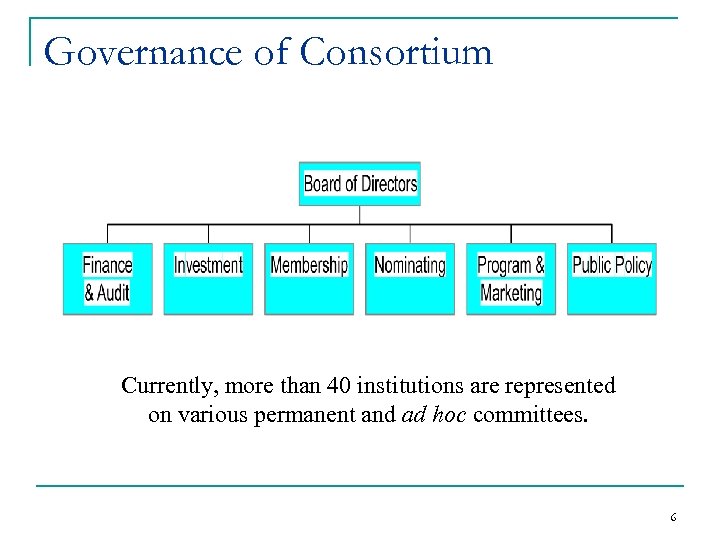 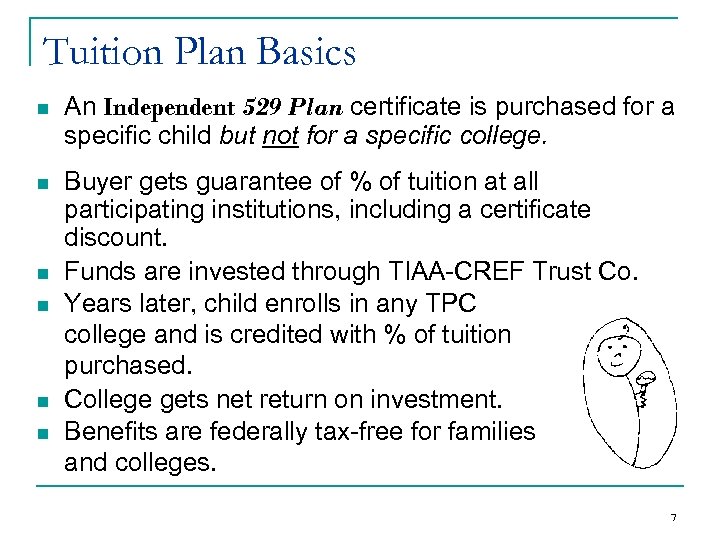 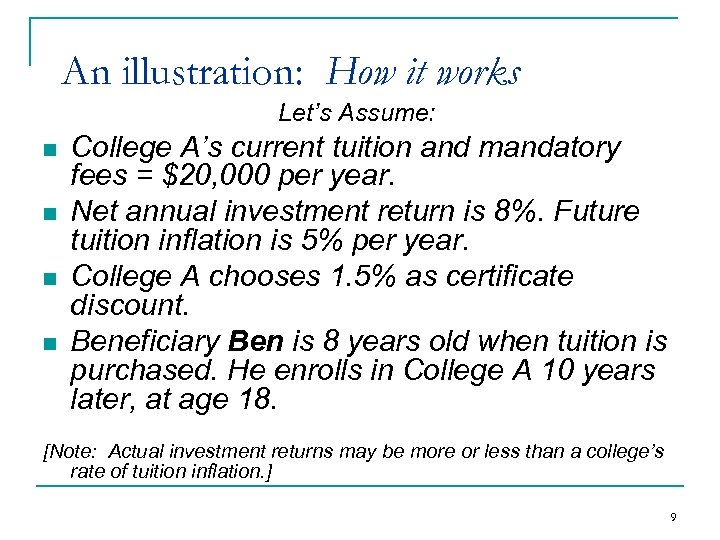 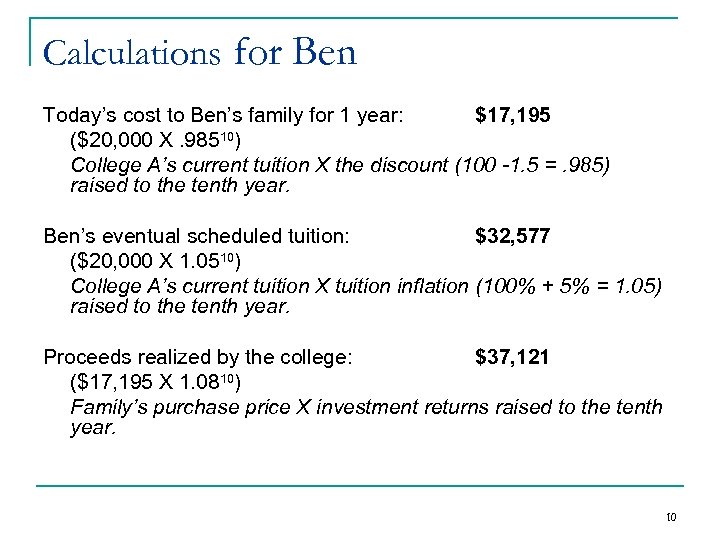 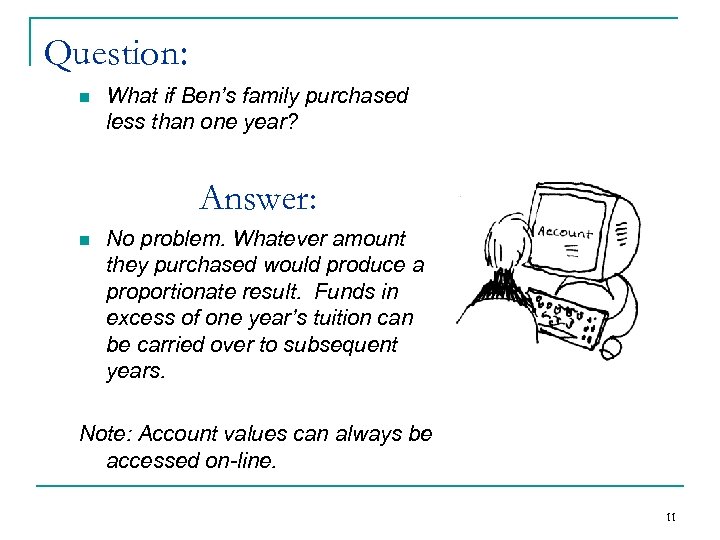 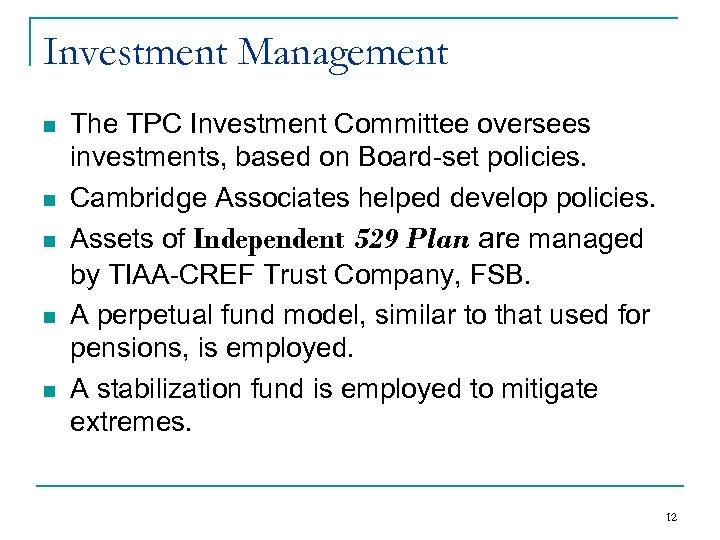 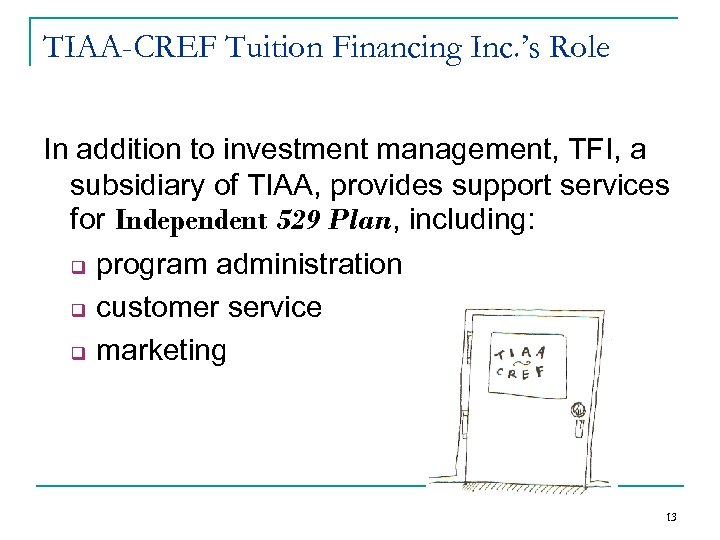 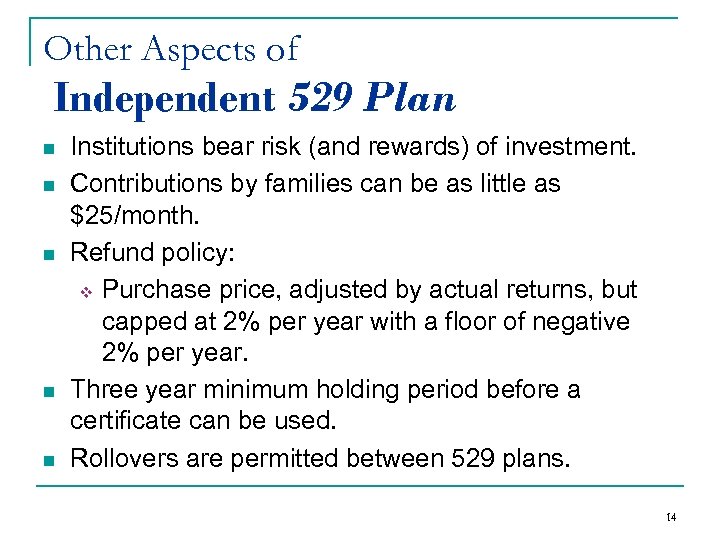 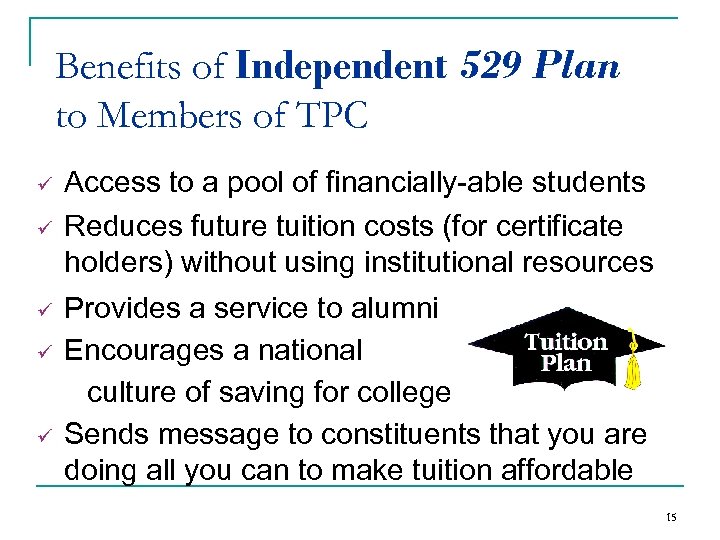 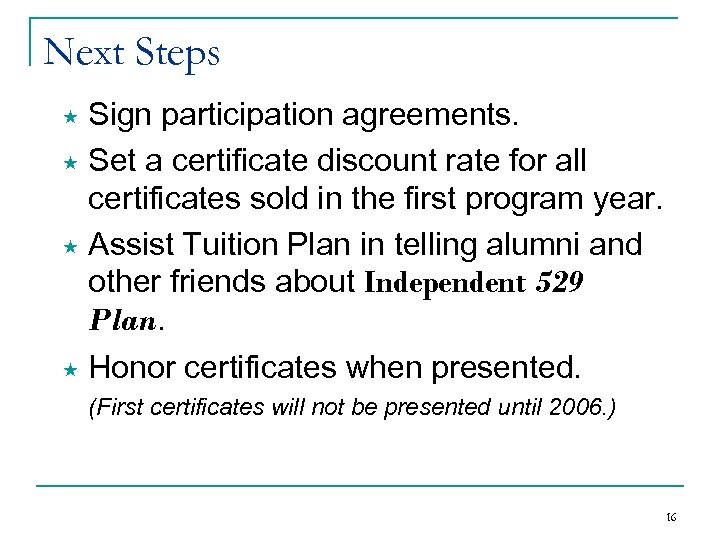 Скачать презентацию A Nationwide 529 Plan Established by the Independent

A Nationwide 529 Plan, Established by the Independent Colleges and Universities of Consortium 1

State 529 Plans n n Are established in all 50 states Benefits are federal income-tax free (many also have state tax benefits) n n Had $26+ Billion in combined assets as of July 2002 Come in two varieties: q q Savings (like an investment fund) Prepaid (guarantees against tuition inflation) * Independent 529 Plan is the prepaid type 3

Why an Independent College Prepaid 529? v. Many families want the protection against tuition inflation that savings plans do not have v. Not all states have prepaid plans (currently, fewer than 20) v. State prepaid plans cannot guarantee tuition at out-of-state colleges and universities v. Most independent colleges seek students from out-of-state 4

Forming a Consortium n In January, 1998, 18 southern colleges formed Tuition Plan Consortium (TPC) and began recruiting their peers. n By the end of the year, the TPC had grown to 104 founding institutions. n Currently, TPC has the go-ahead from the IRS to launch the first college-sponsored 529 plan. It has the support from almost 300 founding institutions in 42 states. 5

Governance of Consortium Currently, more than 40 institutions are represented on various permanent and ad hoc committees. 6

Tuition Plan Basics n An Independent 529 Plan certificate is purchased for a specific child but not for a specific college. n Buyer gets guarantee of % of tuition at all participating institutions, including a certificate discount. Funds are invested through TIAA-CREF Trust Co. Years later, child enrolls in any TPC college and is credited with % of tuition purchased. College gets net return on investment. Benefits are federally tax-free for families and colleges. n n 7

Why a Certificate Discount? n n Suppose tuition is inflating at 5% a year. Suppose net investment returns average 8%. The college would realize a 3% excess return. Why share the return with families? v v It’s the right thing to do. Makes Independent 529 Plan more attractive and marketable. Better ratings in the financial press. Reduces exposure to accusations of gouging. 8

An illustration: How it works Let’s Assume: n n College A’s current tuition and mandatory fees = $20, 000 per year. Net annual investment return is 8%. Future tuition inflation is 5% per year. College A chooses 1. 5% as certificate discount. Beneficiary Ben is 8 years old when tuition is purchased. He enrolls in College A 10 years later, at age 18. [Note: Actual investment returns may be more or less than a college’s rate of tuition inflation. ] 9

Question: n What if Ben’s family purchased less than one year? Answer: n No problem. Whatever amount they purchased would produce a proportionate result. Funds in excess of one year’s tuition can be carried over to subsequent years. Note: Account values can always be accessed on-line. 11

Other Aspects of Independent 529 Plan n n Institutions bear risk (and rewards) of investment. Contributions by families can be as little as $25/month. Refund policy: v Purchase price, adjusted by actual returns, but capped at 2% per year with a floor of negative 2% per year. Three year minimum holding period before a certificate can be used. Rollovers are permitted between 529 plans. 14

Next Steps Sign participation agreements. « Set a certificate discount rate for all certificates sold in the first program year. « Assist Tuition Plan in telling alumni and other friends about Independent 529 Plan. « Honor certificates when presented. « (First certificates will not be presented until 2006. ) 16